Fun and Interesting Facts About Horses

By Nick A. Romero, Biologist and environmental educator. August 30, 2022

Without horses, our world would not exist as we know it today. Horses and humans have an ancient relationship that dates back thousands of years. They were domesticated by Asian nomads about 4,000 years ago, and they were essential to many societies until the advent of motors. Horses are mammals in the order Perissodactyla, which belong to the family Equidae and are closely related to zebras and donkeys. Although they are such familiar animals, the following facts about these magnificent creatures may surprise you.

The following AnimalWised article explains some of the most fascinating and least known facts about horses.

Are there wild horses?

It is common to confuse a wild horse with feral horses. A domestic animal becomes "feral" when it fends for itself in the wild without man helping or controlling it in any way. If it finds others of its kind, reproduces, and the offspring also fend for themselves in the wild, the result is a feral population. Feral horses live in self-sustaining populations in the wild, even though they were once part of domestic horse populations.

All wild horse populations that once inhabited the earth are now extinct. There is not a single living specimen left, nor have any remains been found old enough to tell where or when they disappeared. A new study shows that the last wild horses, the Przewalski's horses, which roam freely on the steppes between Mongolia and China, are actually feral. They are descended from the earliest known domesticated horses, associated with the Botai horses that lived north of present-day Kazakhstan, 5500 years ago.

If you want to learn more about wild horses, do not miss this other article, where we discuss what wild horses are and what subspecies of horses exist around the world.

How fast can a horse run?

Horses are adapted to running so that they can quickly escape predators. They have an excellent sense of balance and a strong fight-or-flight response.

Some claim that a horse with extraordinary abilities can reach speeds of over 85 km/h in freedom without the rider's weight on its back. However, 50 km/h is a reasonable speed for a normal horse ridden by an average rider.

Breeders' statistics seem to confirm that competition horses are getting faster and faster, especially when it comes to short distances. This is due to the fact that in recent decades breeders have favored genetic characteristics of speed over endurance, the latter factor being more valued in long-distance events, which are generally dominated by horses of Arabian origin.

On the other hand, different studies show that genetic factors account for only 30% of a racehorse's performance, and that nutrition techniques, training, and the surface of the track are other factors to be taken into account.

How do horses move?

Man can walk, hop, and run. But with four legs, horses can move in even more different ways, called gaits. They can walk, trot, canter, and gallop, depending on how fast they need to move. Each gait has a specific pattern, with one or more hooves leaving the ground at a time.

In addition to these basic gaits, there are also horses that perform other movements that we call artificial, derived from the previous ones, but which are a transformation of these movements. For example, the two-beat walk or the four-beat gait, which have approximately the same speed as a trot or a walk, but are smoother to ride.

Do horses live in groups?

In the wild, horses live together in herds. Unlike other herbivores on the plains, which tend to form large herds, horses live in small herds of three to twelve animals.

At the head of the group is a dominant male, a stallion, who is responsible for protecting the group and mating with females. The male leader also leads the group in search of pasture. The dominant male is the only one who inseminates the mares of the herd.

This male may be accompanied by young males, which are often his offspring. When they reach adulthood, they are usually cast out of the herd and must find another herd.

Males fight for control of the female herds. Using bites and kicks from their front legs, they fight, buck and lash out until one of the two opponents decides to end the fight. Injuries are usually not serious, and deaths are very rare.

Once defeated, the individual is ejected from the herd and must wander alone until he finds a female with whom he can form a herd, or until he takes over another herd by defeating an alpha male. Occasionally, males live alone or establish herds with other young males.

What is a group of horses called?

If you want to learn more about horses and their reproduction, do not miss this other article about how horses mate in the wild.

How do horses sleep?

In fact, horses only lie down to enter the REM sleep phase, and usually only for a few minutes. The reason for this is that during this phase all muscles from the neck down relax. So if a horse were to enter REM sleep while standing, it would fall over.

Horses prefer to sleep standing up because they are prey animals, meaning they have had to survive multiple predators throughout their evolution. Moreover, sleep is a state in which the animal is defenseless and completely unprotected.

Moreover, given their size, lying down for too long could hinder blood circulation and increase internal pressure on their organs, which could be dangerous for their health.

If you are still curious to learn more about how horses sleep and what their sleep patterns are, continue reading this other article where we explain in more detail how horses sleep.

Where do horses come from?

Their existence dates back 20,000 years. Engravings and cave paintings with representative figures have been found in caves in Italy, France, and Spain. They have also been shown to roam freely in prehistoric times in Central Asia, much of China, and Europe.

Recent studies have shown that horses were first domesticated in the Pontic-Caspian steppes and the northern Caucasus before conquering the rest of Eurasia within a few centuries. However, there are other theories that assume that horses did not originate in a single place, but that today's domesticated horses are a combination of different places where they were domesticated at the same time.

Thanks to their domestication, horses are now common all over the world. These quadrupeds adapt quite well to different types of ecosystems, although in their natural habitat they prefer grasslands, steppes, savannas, semideserts, swamps, and forests.

How many breeds of horses are there?

There is only one species of domestic horse, but about 400 different breeds that specialize in everything from pulling wagons to racing. All horses are grazing animals. Although the breeds can look very different, they all belong to a single species: Equus caballus.

Since its domestication centuries ago, even if some wild horses still exist today, the horse has accompanied the migrations of man. Their morphological characteristics have led to an infinite number of typologies adapted to the most diverse activities: Traction, power, racing, transport, etc. Therefore, the appearance of a breed is often related to its intended use. When these characteristics are passed down through many generations, a new breed is created.

If you want to learn more about the different types of horses, do not miss this other article where we discuss how horses are classified.

How do horses communicate?

As group animals, horses communicate with their group members and with humans through a sophisticated and complex language of gestures, movements, and sounds with which they convey their feelings, emotions, and fears.

The various ear movements communicate whether what is being observed or perceived could pose a danger to the herd, making the ears act like a real traffic light at that moment. Stiff ears that are tilted slightly forward signify safety, while ears that are folded back are a sign of uncertainty.

Recent studies have shown that horses show varied facial expressions depending on the situation and their mood.

If you want to learn more about horses and the way they communicate, do not miss this other article, where we discuss how horses communicate using posture and sounds.

If you want to read similar articles to Fun and Interesting Facts About Horses, we recommend you visit our Facts about the animal kingdom category.

Fun and Interesting Facts About Horses 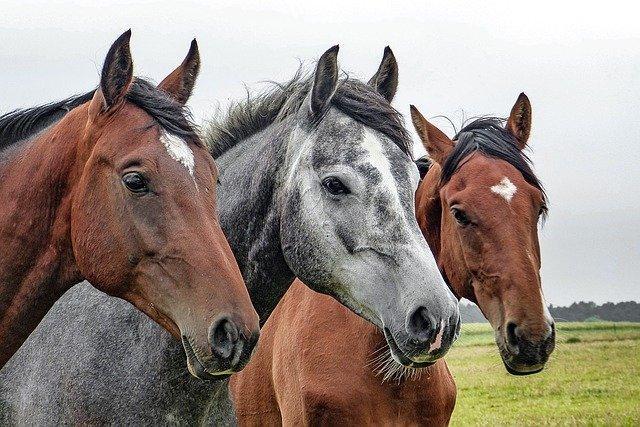 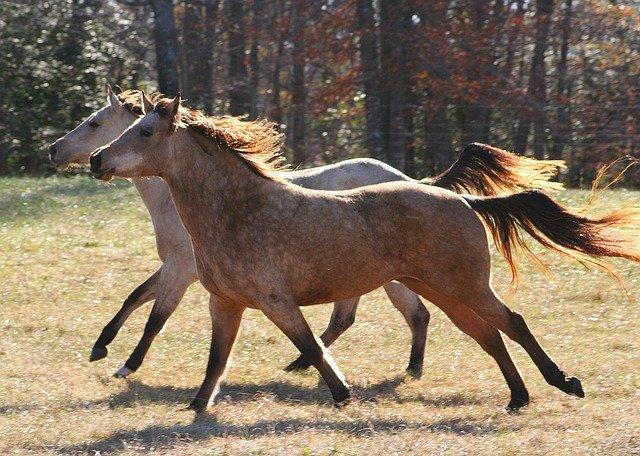 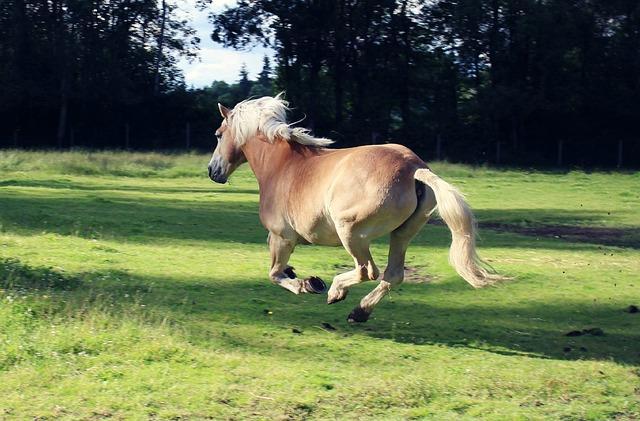 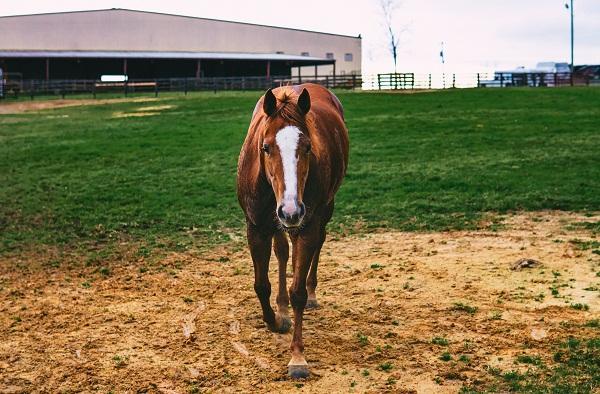 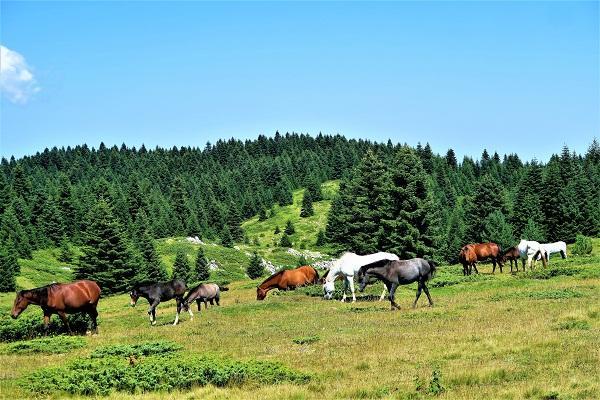 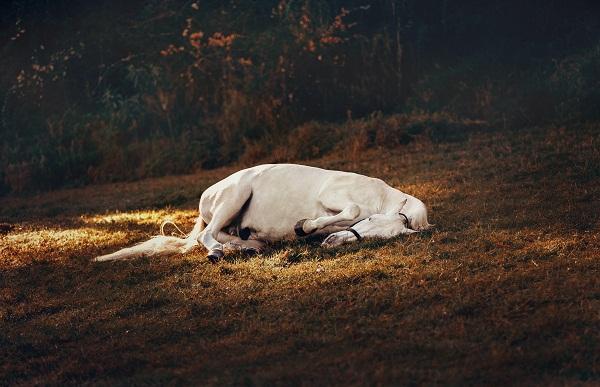 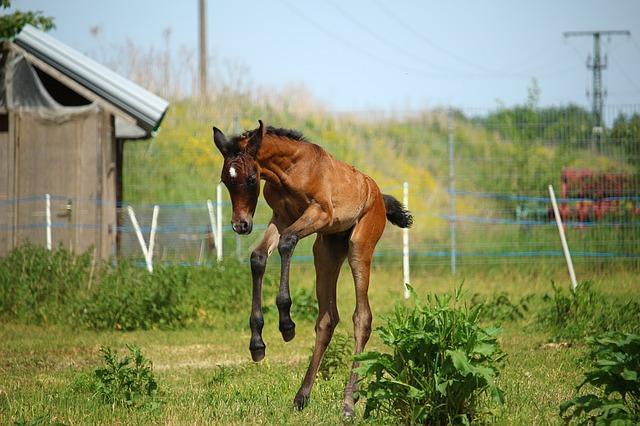