Why do Dogs Growl When They Play?

It's not strange to see dogs emit a few growls when they are playing with other dogs. In most cases, it won't lead to a fight, with the sounds they make seeming playful in themselves. Still, when we hear these grunts and growls we can worry for the well-being of our dogs. Playful growls turning into serious aggression is also a concern, for both our pet and the other animal. The same happens when our dogs growl at us while playing. It can seem like we might be experiencing aggression also. With all the love we give them, this can be a confusing aspect to the bonds we have with our dog.

This is why AnimalWised investigates why do dogs growl when they play. We want to understand what they are trying to communicate when they growl, when or if we should feel apprehensive and how we should play properly with our pooches.

You may also be interested in: What Kind of Toys Do Ferrets Like to Play With?
Contents

Our canine companions cannot talk in the way we humans do. This doesn't mean they don't vocalize. By making noises such as growling, barking, whimpering, howling or yapping they try to communicate things both to us and other animals. They combine these vocalizations with body language to communicate effectively.

Growing, as we mentioned above, is usually a sign that a dangerous situation may develop. It is often a a warning that something is displeasing them and may even attack or bite if the perceived aggression is not withdrawn. Dogs may also growl for other reasons. For example, if they had a pain in their side and are touched in this area, they might growl as a response to keep someone away. Feeling vulnerable might increase the likelihood of growling.

However, it is not always a negative reason why a dog might growl. If we are petting our dog, then we may observe the dog growling in pleasure. These are playful growls which undiscerning ears might mistake for aggression, but really they are in their element.

The breed of dog will also have a bearing on what their growls might mean. Some dog's natural vocalization simply sounds more like a growl. For example, the Basenji (believed to be the oldest dog breed in the world) will growl and howl at will without the slightest hint of anger.

Importance of play in dogs

Dogs are eminently social animals. When puppies, wild dogs will want to play with their siblings just as much as domesticated dogs. It is how they learn to socialize and, naturally, it provides positive experiences for the dog because they enjoy it so much. Domestic dogs will keep this youthful exuberance on into adulthood, although this isn't to say wild adult dogs don't also enjoy play.

Through play, dogs learn how to relate to their environment, their peers and we humans. As they ideally do this with their mother and siblings, it is imperative puppies stay with the mother for at least the first 8 weeks of life. After this time, the puppies will need to branch out and start to do the same with other animals and the different creatures which inhabit their environment. This is why orphaned or abandoned pups need very specific care as they miss out on this process.

With games and play, dogs exercise both their physical and mental abilities. They can measure their strength against other dogs and also they will be able to gauge their overall constitution. If your dog stops playing, it is likely a sign they are suffering some physical or mental ailment. With age, dogs will lose some of their desire to be quite as playful, especially with the same vigor as their youth. However, many dogs will remain playful and exuberant until they pass.

Developing play with other dogs

Developing play with other dogs, whether one or more, is very important for a dog's well-being. They may not be able to do this all the time at home if they are an only-pet. However, when you take them for walks, either to a specific dog park or even just around your neighborhood, they should be expected to play happily with other canines.

Non-verbal communication is very important in dogs. This is why it is important for carers to distinguish the different typical postures they will assume when playing with us and other dogs. One of the most important for play is when they place their front paws out in front and then raise their rear in the air. It is common for them to jump around a little and hold their mouths open expectantly. They may even growl or bark, but in a non-threatening manner. This stance is know as ‘game posture’ and it looks as if the dog is giving a little bow.

All these details are a prelude to play. Another clear sign of a desire to play is when dogs roll around on the grass with their feet up in the air. They may also run around the other dogs and bark expectantly. Sometimes they run ahead a little bit, then come back again. It looks as if they want to challenge the other dogs to a race, which isn't always far off the mark.

All these behaviors will be exhibited by different dogs at different times. Sometimes one will seem more dominant, then these roles are reversed. Some dogs simply are less playful, but are generally tolerant. As we observe during these games, you will see that the dogs will growl and bark, maybe even snapping or biting at the other dogs. However, in most cases this is part of the play. If the dog has learned bite inhibition they will know how much pressure they can exert and still be playing. The other dogs usually know the different between play and genuine aggression, something we might not be as adept at distinguishing.

Game sessions with dogs and human beings share a lot of the characteristics described above. They may also include growling and grunting, especially if they involve certain toys. Dogs quite often play tug of war with humans by dragging on a toy in the grip of their owner. It is almost a form of wrestling and the growls are simple signs they are engaging in play. You can tell by looking at the rest of their body language that they are not being serious.

During these types of tug of war games, we need to mix it up a little. Let them win sometimes, but not all the time. This will both prevent them getting too possessive over toys and also not develop behavioral problems if they think they are in control all the time. A good tool to learn during training is to get them to release. This means they can play, but when it is time for the play to stop they can release automatically without feeling rejected.

Most of the time when playing with us or other dogs, their grunts and growls will be innocent and will require little further attention. However, it is very important we learn how to tell when this growling turns into a warning sign.

When growling for warning, we will see the dog tense up and give a stance of alertness. They may even bare their teeth, although this too can sometimes occur when the dog is merely playing. It is in these situations that an attack may occur. It is often a sign of bad socialization in dogs. They may remember bad experiences or past trauma which affects how they play with other dogs. They have not learned their boundaries and can become problematic. Playful growls and grunts don't have this type of tension. They are given in a relaxed manner and will be combined with frolicking, running, jumping and chasing. They will not be attacking.

Sometimes, different dogs will have different types of play depending on their experience. Some younger dogs may not yet know when to stop and an older dog will growl to teach them a lesson. It is important to recognize when a dog is showing warning signs of aggression or discomfort. In these instances, we need to take our dog out of the equation and let the others get on their way.

However, it is important to remember that poor socialization will lead to growling. If we scold or hit dogs when they do something we perceive as wrong, it can lead them to become stressed and anxious. This means they are more likely growl and can even become aggressive. If we have a dog which doesn't know how to control their growls, we must train it out of them. If we are unable, a specialized dog trainer or canine ethologist should be employed to help dogs in need.

If you want to read similar articles to Why do Dogs Growl When They Play?, we recommend you visit our Animal games and fun category.

6 Games to Play with Your Dog Indoors
Tips to Motivate my Dog to Play
Playing With Your Puppy the Right Way
How Long Should I Play with My Cat?
Related categories
Basic educationSportsAdvanced educationBehavioral problems
Most read
1.
How to Make a Pit Bull Release its Bite
2.
My Dog Is Aggressive After Neutering
3.
Why Is My Dog Suddenly Scared Of Me?
4.
Tips to Train an American Bully
5.
Why is my Dog Pooping in the House Suddenly?
6.
How to Stop Your Dog From Peeing Inside at Night
7.
How To Stop My Cat From Biting My Ankles
8.
What Does It Mean When a Dog Lifts a Front Paw?
Toys for Cats: Ideas and Tips to Play with your Cat
How to Play With a Cat - Fun Games to Bond With Your Cat!
Is it OK for Cats to Play With Laser Pointers?
10 Reasons Why You Should Walk Your Dog
My Dog Is Freaking Out for No Reason
Activities for Older Dogs
How to Make my Dog Love Me
Are Tennis Balls Bad for Dogs?

Why do Dogs Growl When They Play? 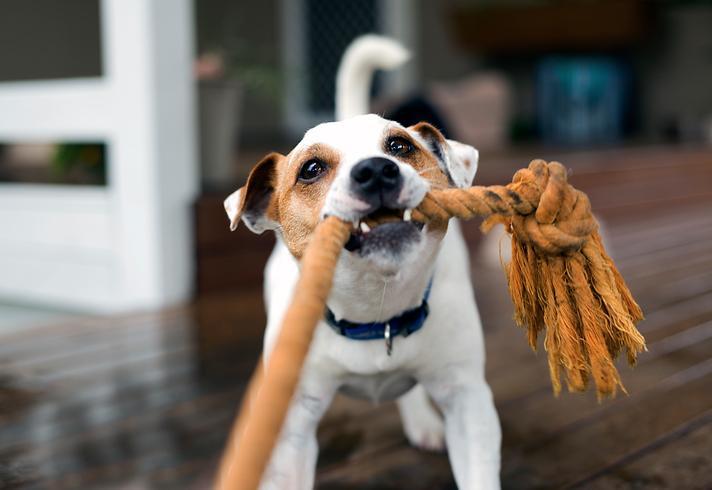 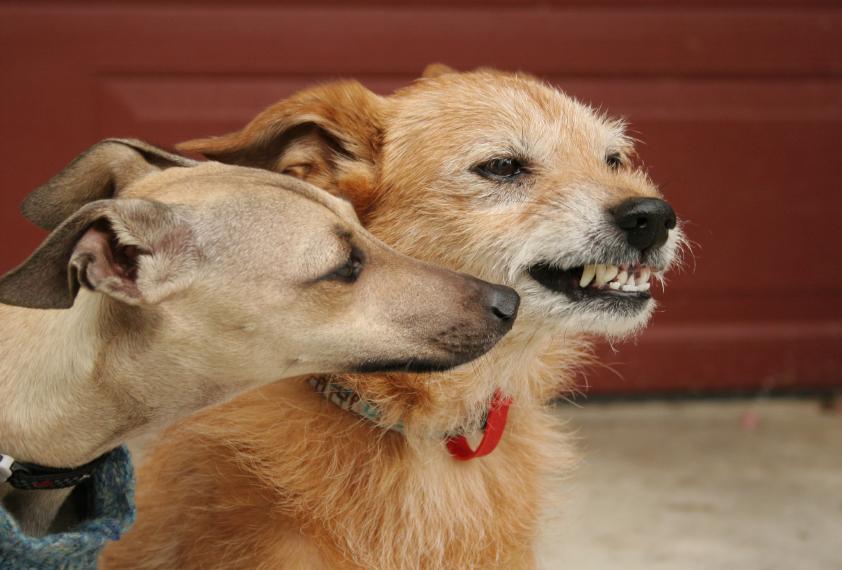 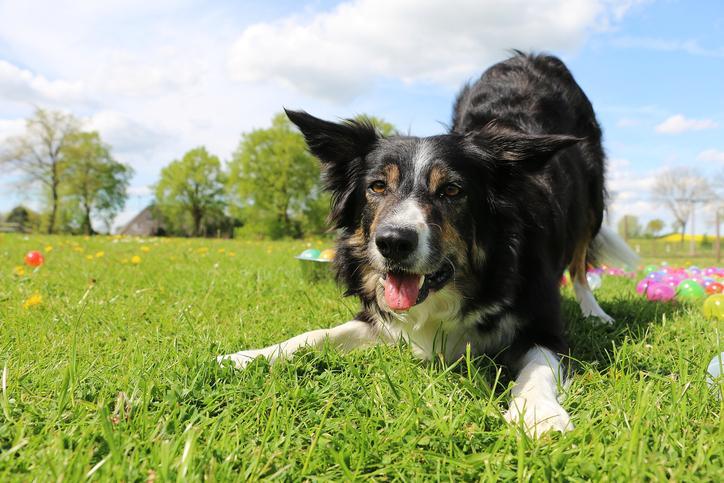 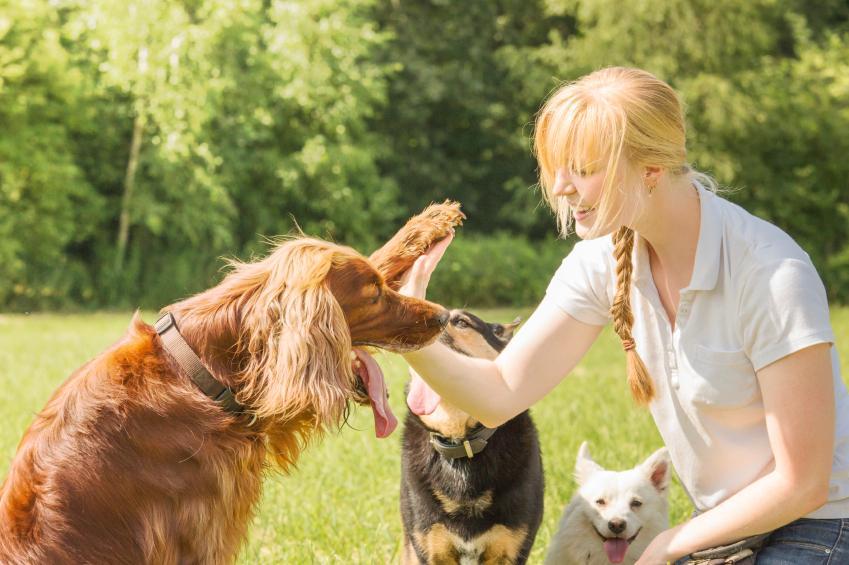 1 of 4
Why do Dogs Growl When They Play?
Back to top