Sometimes, when two or more cats live in a house, there is conflict or fighting between them. When this happens, many caregivers attribute the aggressive behavior of one of the cats to an alpha or dominant character. The concept of dominance, however, is often misused. There is a tendency to view some behaviors as dominant, when in fact, they have little to do with social order or hierarchy. The truth is that some cats are unusually territorial and may never get used to sharing their home. However, the good news is that many aggressive problems between cats can be successfully resolved.

This AnimalWised article explains what an alpha cat is and how you can properly recognize and resolve aggressive behavior.

You may also be interested in: Best Techniques for Dog Training
Contents

What is an alpha or dominant cat?

In the 1970s, American biologist David Mech first discussed "alpha wolf" theory after studying the social behavior of a group of captive wolves. Since then, the term has been used on countless occasions to explain relationships between animals and has been applied to a variety of species, including the domestic cat.

Thanks to scientific advances in the field of ethology, we now know that many of the assumptions of this "alpha wolf" theory are not consistent with the actual behavior of social animals. Mech himself has admitted that he was wrong on some points. Nevertheless, the concept of alpha dominance is still misunderstood and misused by most people. Often, they mistakenly believe it is a fixed and unchanging personality trait, when it is not.

The social hierarchy in the domestic cat

As we all know, domestic cats are more independent and territorial animals than dogs. However, this does not mean that they cannot live in a group and enjoy the company of other cats. In this sense, the so-called "alpha hierarchy" refers to the way individuals of the same species organize themselves within a group when access to a valuable resource is limited.

Contrary to popular belief, the role of the alpha cat is not fixed and can change depending on the context. That is, a cat is not born alpha nor is it alpha by nature. Certain changes in the cat's environment, such as when a member enters or leaves, or when their hormonal or health status changes, can lead to this type of behavior.

Learn more about the importance of socialization by reading this other article on how to properly socialize an adult cat.

Do you have an alpha or dominant cat?

There is no hierarchy between individuals as different as a cat and a human, which means that your cat does not want to dominate you. We often think that certain behaviors of cats are a sign of dominance, but this is rarely the case.

If your cat bites you, scratches you, jumps on you, growls when you approach, relieve themselves outside their litter box, or sprays urine all over the house, you should see an ethologist who specializes in cat behavior. There are many factors that can trigger these behaviors, from simple playfulness to an illness or stress in the animal.

If you live with multiple cats and want to better understand the role each plays in the group, you will need to observe them in different contexts. The specific behaviors associated with the "alpha cat" do not occur all the time. They usually occur whenever access to a valuable resource, such as a particular resting place, is limited. When two or more cats want to access this resource, the one with the highest "status" may exhibit the following behaviors:

If the other cat understands and respects these signals, no conflict will be triggered. However, if this does not happen, cats may scratch or even bite each other.

Dominance and aggressiveness are not the same

It is important not to confuse dominance with aggressive behavior, as they are two completely different concepts. Dominance hierarchy is the natural way cats organize themselves within a group. Even if violent behavior occurs on certain occasions, it does not necessarily mean that there is a problem with the animals or their environment. If two or more cats living together attack each other systematically or too frequently in different contexts, there is most likely a physical or emotional issue.

When we observe a cat fighting with other cats outside its social group (i.e., cats it does not live with), this may be the result of either a socialization deficit or an attempt to defend its environment.

In any of these cases, it is best to seek the help of a veterinarian, who can rule out health problems in the cat. You should also consult an ethologist, who can analyze the situation and give you recommendations for action and a protocol for behavior modification.

You can learn more about cat aggressiveness and how to solve it by reading this other article about why your cat is aggressive towards other cats.

How to deal with an aggressive cat

The behaviors exhibited by a dominant cat should not be punished. First, because they are part of the normal communication of the species. Second, because scolding or intimidating our cat can lead to frustration and stress, which will exacerbate its behavior.

If we want to reduce the frequency of threats or fights in our cats, it is best to change the environment in which they live and adapt it to their needs as much as possible. In this way, none of the animals will have to come into conflict with others to gain access to a resource or space. Here are some things you can do:

Although domestic cats are generally social animals, this does not mean that they must always tolerate sharing their home with other individuals of their species. You must keep in mind that introducing a new feline companion into your home can be very stressful for the resident cat(s). To achieve peaceful coexistence, you will need to provide a good introduction and give the cats time to get used to each other.

If you want to read similar articles to Alpha Cat Behavior, we recommend you visit our Basic education category.

Cognitive Emotional Training for Dogs - A Complete Guide
Positive Reinforcement in Cats
Litter Training a Cat
Can Cats Be Trained?
Related categories
Animal games and funBehavioral problemsAdvanced educationSports
Most read
1.
My Dog Is Aggressive After Neutering
2.
Why is my Dog Pooping in the House Suddenly?
3.
How to Make a Pit Bull Release its Bite
4.
Why Is My Dog Suddenly Scared Of Me?
5.
Tips to Train an American Bully
6.
How to Stop Your Dog From Peeing Inside at Night
7.
How To Stop My Cat From Biting My Ankles
8.
What Does It Mean When a Dog Lifts a Front Paw?
Tips to Stop a Cat from Scratching the Sofa
My Cat Is Climbing the Furniture
What Are the Best Treats for Cats?
How to Socialize a Kitten With Other Cats
Tips to Tame a Feral Cat
How to Introduce a New Cat to Another Cat
How to Teach a Cat its Name
Why Do Cats Like to Play With String? 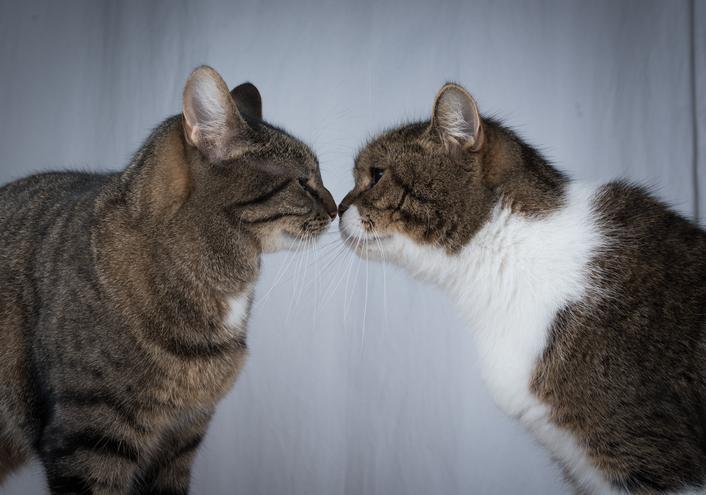 Alpha Cat Behavior
Back to top