Chickens are becoming a popular companion animal again. While we have come to associate them mainly with their use as livestock, more and more homes are adopting to them as members of the family. Even those who rear chickens for their eggs are bonding and keeping them as companion animals. This has led to a greater interest in different domestic chicken breeds, of which there are many more than you likely first imagined. One of the most beautiful and fascinating is the Plymouth Rock chicken breed. Learn all about their origin, characteristics, care and more with AnimalWised.

Although there is much we do not know about where they began, it is known that this breed of chicken originated in the United States. They were first exhibited in the city of Boston in 1849. However, the Plymouth Rock chicken was not seen for another two decades afterwards, until it reappeared in the same state of Massachusetts in 1869, being formally recognized as a breed in 1874.

The Plymouth Rock chicken is the product of crossing several types of chickens. Although there has been some controversy about which breeds gave rise to it, a study[1] indicates that a very old American breed known as ‘Dominique’ was mainly used to obtain the Plymouth Rock breed we know now. Additionally, the Black Java and Cochin chickens also contributed to the crosses on the female side, while the Black Java, Cochin, Langshan, Light Brahma and Black Minorca roosters were on the male. The same study also indicates that certain historical records are consistent with the origin of this chicken. Currently, it is a breed that enjoys significant recognition by specialists in the area of chicken breeding.

Characteristics of the Plymouth Rock chicken

The physical traits that characterize the Plymouth Rock chicken are:

The Plymouth Rock's most striking physical characteristic is their peculiar coloration. The most representative and common coloration of the breed is known as barred. This consists of a black coloration with spots in the form of white parallel bars on each feather. In the male the white coloration is more evident. This barred type is due to a sex-linked dominant gene.

Although the barred chicken is the most popular, other lesser-known varieties of the breed include the white rock, pencil partridge, silver partridge, mesh partridge, lace blue, beige, and black, among others. Depending on the country, particular varieties may be recognized by breed standardization organizations.

Talking about the habitat of a domesticated animal is usually an aspect that is not precisely established. These chickens are developed in the spaces that are enabled for them. As chickens are animals distributed throughout the world, they have developed the ability to adapt to different environmental conditions. For this reason, in the wild they can be present in varied meadows and forests.

Both the females and the males of this breed have a docile and calm character. Females are characterized by being particularly good mothers that like to brood their eggs.

Due to their temperament, they are considered a good companion animal, even for children. This is as long as they know how to interact properly and the chicken is allowed to enjoy wide natural spaces to carry out their customs and habits. The Plymouth Rock breed also can also have a good relationship with other pets.

It is resistant to temperature variations, which makes it a strong animal. However, in summer it is recommended that it be kept in cool spaces. As for food, it requires a balanced source of nutrients, including proteins, carbohydrates, fats and minerals. They can consume various sources of food of animal origin (including marine) and vegetables, as well as minerals such as calcium, phosphorus and selenium. Although the use of commercial feed is generally recommended when natural areas are not available, if it is done in an adequate and varied way. A natural diet is the most appropriate and beneficial for this and all chickens. For this reason, it is very important that the Plymouth Rock chicken enjoy a large area made up of different terrain such as green areas, sand, etc.

Although the opinion of a specialist is always important, natural diets for Plymouth Rock chickens can include ground soybean husks, rape or canola bran and ground flaxseed husks. Pea seeds, oats and worms are also good, as they can provide good nutrients. In addition, it is essential that they have constant access to clean water for hydration. For more general care of chickens, take a lot at our chicken care guide.

As with any domesticated animal, the Plymouth Rock breed requires adequate nutrition, such as the one mentioned above. They also need cool areas in summer, water and hygiene in the space in which they live. By taking care of these aspects, their health should not deteriorate, since it is relatively-long-lived breed. However, we encourage you to consult this other article on the most common diseases in chickens to learn how to identify their symptoms.

Reproduction of the Plymouth Rock chicken

At 21 weeks both females and males become sexually mature. For chicken reproduction to occur, the male makes a courtship that consists of a dance around the hen. She bends over and the rooster proceeds to mount her, holding her by the neck to initiate the sexual act. The males can be with various hens in the group, copulating with any that will accept him.

The Plymouth Rock chicken was the subject of some scientific research related to oncogenesis (study of mutated genes). The American doctor Francis Peyton Rous discovered an oncovirus called Roys sarcoma virus which causes neoplasia in chickens, particularly the Plymouth Rock breed. The study earned this scientist the Nobel Prize in Medicine in 1966.

Related articles
Infectious Coryza in Chickens - Symptoms and Treatment
Differences Between Rooster and Hen
Why Can’t Hens Fly?
How to Prevent, Identify and Treat Chicken Lice
Trichomoniasis in Birds
Why Do Roosters Crow in the Morning?
How to Tell If a Chick is Male or Female
The Best Pet Chicken Names

Upload a picture of your Plymouth Rock Chicken 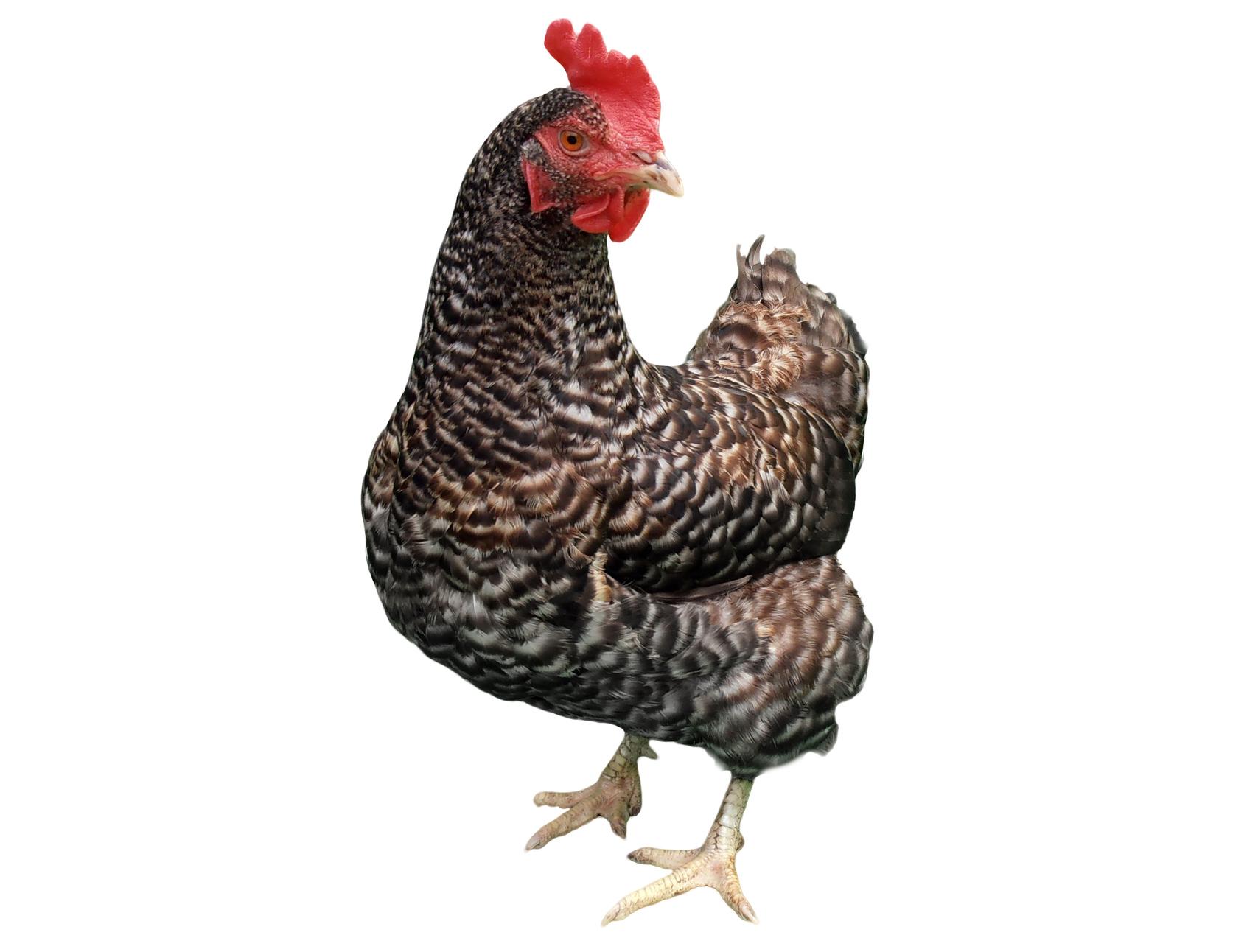 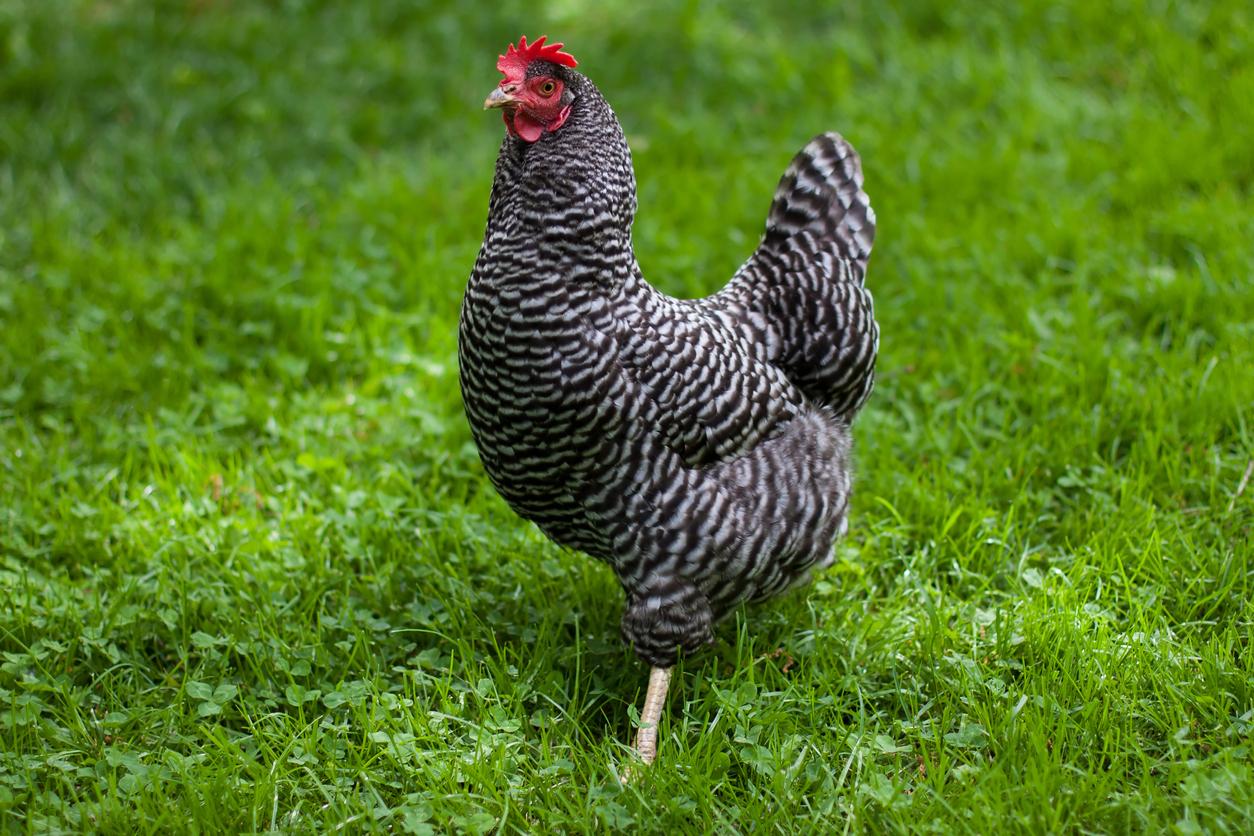 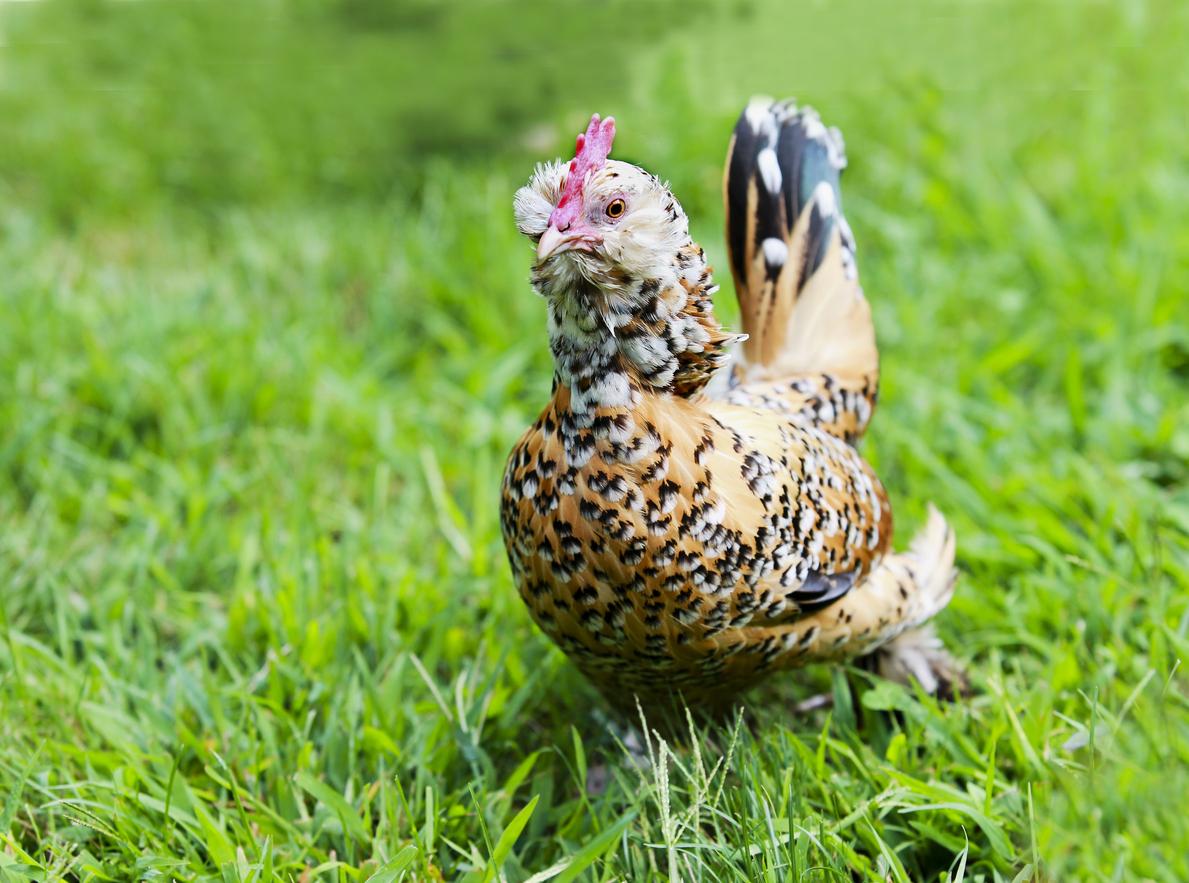 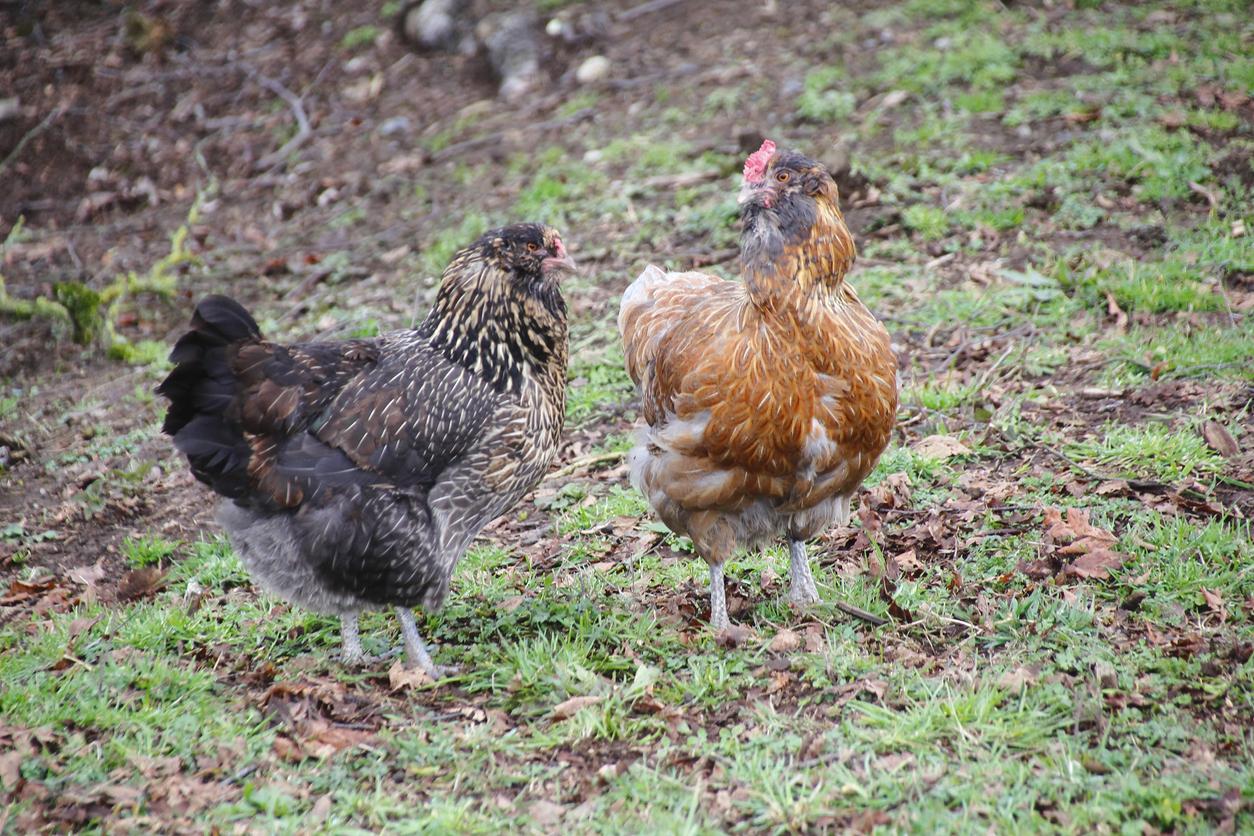 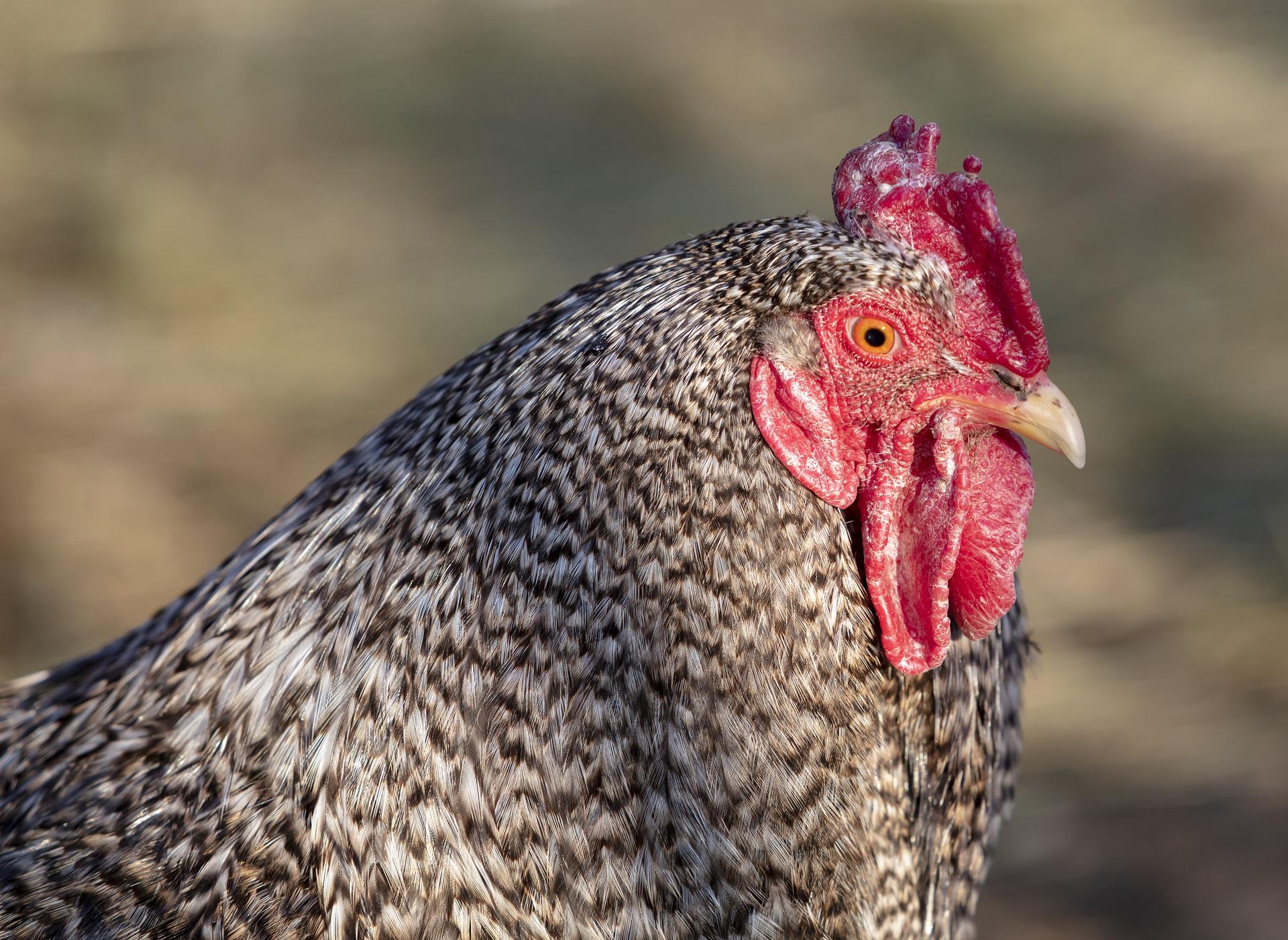 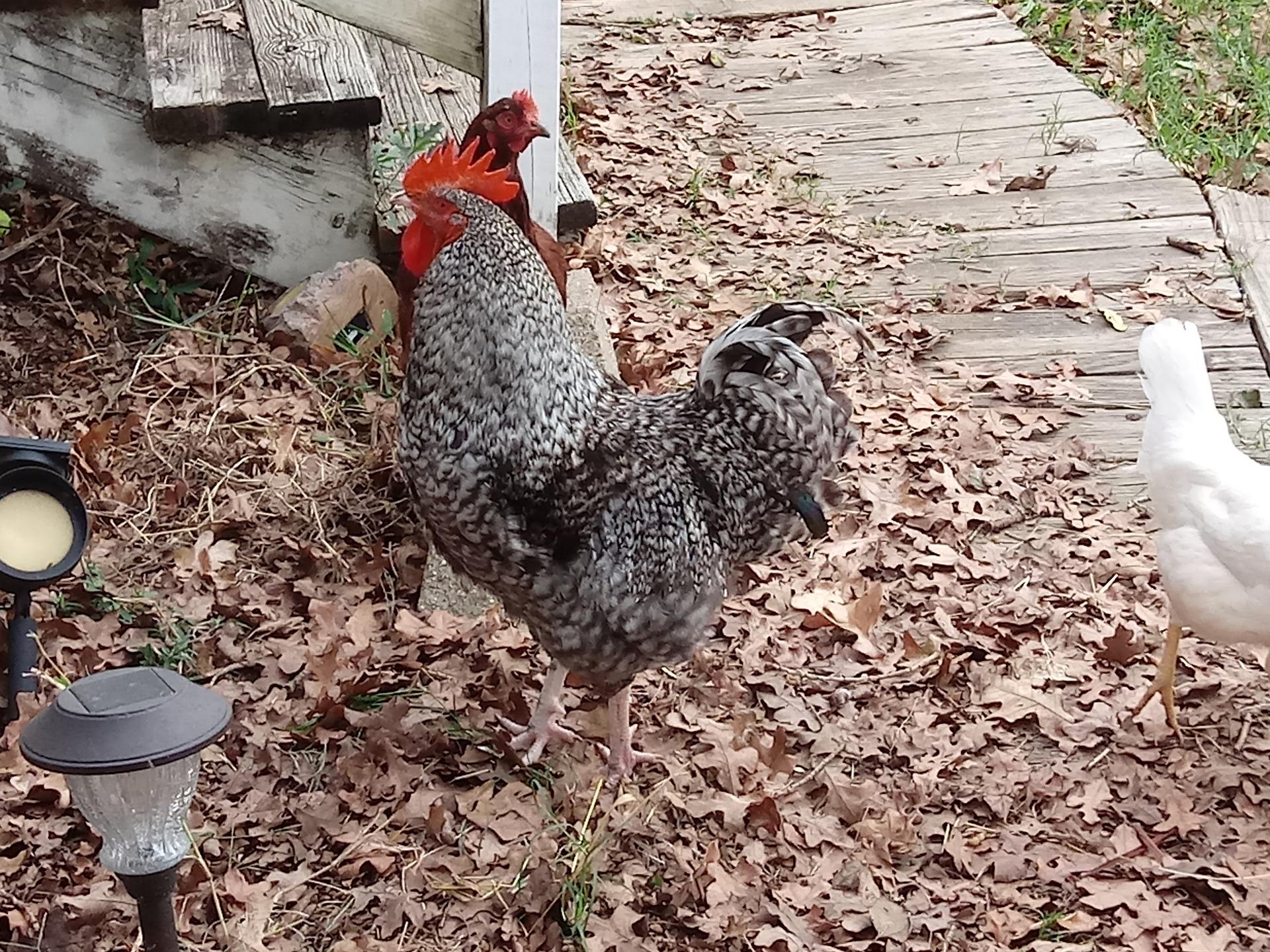 1 of 6
Plymouth Rock Chicken
Back to top