The Continental Giant, also known as the German Giant, is a very large breed of rabbit originally bred for meat production. It is the largest rabbit breed in the world, but aside from its spectacular size, there are many interesting facts about this breed. These giant rabbits are incredibly affectionate and friendly, which makes them very popular among those who like to have rabbits in their home. They are often compared to a dog in their behavior.

Continue reading to learn about all the characteristics of the Continental giant rabbit. AnimalWised looks at their origin, character, care, and possible health problems to help you understand if it is a rabbit you would like to adopt.

Origin of the continental giant rabbit

Continental giant rabbits are descendants of the famous Flemish giant rabbits. Although descended from the Flemish Giant breed, Continentals share bloodlines with many other breeds, including Belgian and German. Like Flemish Giants, Continental Giant Rabbits are one of the oldest known breeds of domestic rabbits. It is estimated that these rabbits appeared as early as the sixteenth century. But it was not until 1893 that the first Continental Giant was officially documented.

In the 19th century, they were imported to the United States from Europe and Great Britain to increase the size of rabbits used for meat production. As a result, many of them participated in animal shows and became pet rabbits due to their friendly nature. Although the breed has not yet been recognized by the American Association of Rabbit Breeders, it is recognized by the British Rabbit Council, which distinguishes between colored and white continental giant rabbits.

The fact that the continental giant rabbit is considered the largest rabbit in the world is not a coincidence. On average, they weigh around 25 lbs and are approximately 3 feet (0.91 m) in length. The life expectancy of this rabbit is quite short compared to other breeds, as it ranges from 5 to 7 years.

They have a large body with strongly developed muscles, hind legs that are longer than the front legs, and a semi-arched back. The head is large, being larger and broader in males. Females usually have some sort of prominent cheek. The ears are thick, erect, long and end in rounded tips. The eyes are rounded and have an expressive and bright look.

The coat of the continental giant rabbits consists of short, dense, thick and very shiny hair. Its undercoat consists of soft, wooly fur that protects against moisture and cold.

The fur of the continental giant rabbit can have the following colors:

Character of the continental giant rabbit

The continental giant rabbit has a well-deserved reputation for being one of the most sociable and friendly of all rabbits. In recent years, they have become popular pets because they are easy-going, friendly with children and people in general, and make great family pets and companions. They love to be touched and even picked up.

Since they are very social rabbits, they need constant contact with people and other animals to be happy and healthy. Likewise, they do not do well with loneliness, either for long periods of time or temporarily, as they require almost constant affection and companionship.

In spite of their size, they are very calm, don't run constantly, and aren't restless at all. Like most animals, they can be trained to do tricks and be obedient when necessary.

If you want to learn more about how to potty train your rabbit, check out this other article where we explain how to do it.

Care of the continental giant rabbit

The most important thing when it comes to the caring of the continental giant rabbit is to provide them with the attention and affection that this breed needs.

Although they do not need too much space, it is usually advisable to give them access to an outdoor area if possible, be it a garden, a terrace, or even a balcony. As long as they can spread out, sunbath and get some air from time to time.

As for their diet, it should not differ from that of other rabbits, although the amount of food they eat may vary. That is, their diet must be based on the consumption of hay, along with fresh vegetables, occasional fruit and special food for rabbits. An adequate diet will ensure that the teeth, which always continue to grow, wear properly, avoiding pain, deformities, and other issues.

If you want to learn more about the growth of teeth in rabbits, read this other article, where we talk about the dental problems in rabbits and their prevention.

The continental giant rabbit may suffer from some diseases due to its size. One of the most common and worrisome are those related to the joints. These problems are usually associated with overweight or obesity.

To avoid dental problems, it is advisable to monitor the wear of the teeth and go to the vet when alarming signs are observed, as well as when our rabbit shows signs of pain or illness. Some of these symptoms are apathy, aggressiveness, lethargy, or reluctance to eat and/or drink.

It is also important that we go for regular veterinary checkups and have our rabbit vaccinated against such dangerous diseases as myxomatosis or viral hemorrhagic disease, both of which can be fatal.

If you want to know how to tell if your rabbit is sick, read this other article, where we tell you what signs to look for in a sick rabbit.

If we want to share our home with a continental giant rabbit, it is very important that we first assess the specific needs and demands of this breed and self-critically evaluate whether we will be able to meet them all.

If, after considering all of its characteristics and needs, you are sure that you would like to adopt it, we recommend that you contact animal shelters, animal welfare organizations, or similar organizations in your area.

Even though many people think that rabbits have a short life, as we have seen, a continental giant rabbit can live 7 years. So it is a big responsibility to keep a continental rabbit as a pet. You have to feed it, take care of it, make sure it stays healthy, help it when it is sick, and finally take care of an extra creature in your home with love and compassion.

Upload a picture of your Continental Giant Rabbit 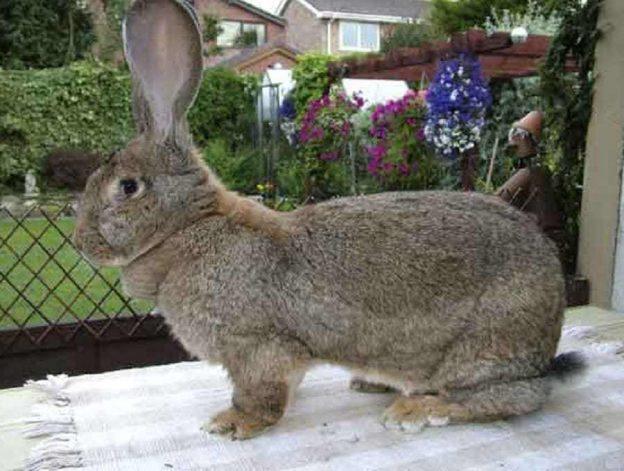 Continental Giant Rabbit
Back to top