By Josie F. Turner, Journalist specialized in Animal Welfare. May 17, 2022

Mushrooms are a large and diverse group of fungi. Some mushrooms are very tasty and nutritious, while others are deadly poisonous. Therefore, it is important that you know which mushrooms are which. Fortunately, store-bought mushrooms are safe for people and dogs, and they are a good source of fiber, essential amino acids and B vitamins. Nevertheless, you should consider a few factors before giving your dog mushrooms.

In the following AnimalWised article, we explain if dogs can eat mushrooms, as well as how to safely feed them to your pup.

You may also be interested in: Can Dogs Eat Cucumber?
Contents

A mushroom or toadstool is the fleshy, spore-bearing fruiting body of a fungus that usually grows above ground, on the soil or on its food source. Mushrooms are among the healthiest foods on the planet. Each species of mushroom is unique and has its own specific combinations of vitamins, minerals, and antioxidants.

There are also species of mushrooms that are toxic or poisonous to dogs and humans.

For this reason, you should never offer an unfamiliar mushroom to your dog. If you decide to go mushroom picking, you must have sufficient knowledge to distinguish between edible and inedible mushrooms. But even if you do not plan to pick mushrooms, be extra careful when walking your dog in the mountains, because these poisonous mushrooms could attract their attention and lead to poisoning by ingestion.

What mushrooms can dogs eat?

As a rule, mushrooms that are edible for humans are also edible for dogs. Therefore, you can include them in your dog's ration as long as you do it properly. In the following sections, we will explain how to include mushrooms in your dog's diet.

Should I include mushrooms in my dog's diet?

Dogs, unlike cats, are opportunistic omnivores, meaning they are carnivores but not pure carnivores. This means that they have a digestive system capable of digesting foods that are not of animal origin, including mushrooms.

There is nothing wrong with including mushrooms in your dog's diet, but you must remember that the majority of the diet must be meat of animal origin.

You can also include other foods of non-animal origin, such as mushrooms, as long as you do so in the right proportion (about 3% of the ration may be sufficient). In any case, remember that when feeding your dog homemade rations, be sure to consult a veterinarian specialized in animal nutrition to ensure that your dog's diet is healthy and balanced.

If you are thinking of replacing commercial food with home-cooked food or including it in your dog's feeding, the first thing you should do is consult a veterinarian who specializes in nutrition. Also, do not hesitate to read this other article, in which we offer a complete guide to home-cooked food for dogs.

The benefits of feeding your dog mushrooms

Mushrooms are foods that provide little energy, about 30 kcal per 100 grams. Therefore, it is a suitable food for dogs with overweight or obesity. They are also a good source of fiber, which provides a feeling of satiety without increasing energy intake, improves intestinal transit, regulates stool consistency and promotes the maintenance of the intestinal microbiota.

Compared to vegetables, mushrooms are a good source of essential amino acids. Although they are present only in small amounts, they contain all essential amino acids. Among vitamins, their high content of niacin (vitamin B3) and riboflavin (vitamin B2), which play an important role in energy metabolism, stands out. In addition, niacin contributes to the proper functioning of the nervous system, digestive system and skin, and riboflavin is necessary to maintain the integrity of the skin and mucous membranes. To a lesser extent, they also contain thiamine (vitamin B1) and vitamin C. As for minerals, mushrooms contain significant amounts of potassium, phosphorus, selenium, and iron.

In addition, the consumption of mushrooms has a delaying effect on the development of diabetes and reduces the clinical signs associated with this disease (polyuria, polydipsia, polyphagia and weight loss). Learn more about this disease in this other article about diabetes in dogs.

How to give mushrooms to a dog?

You can safely add the mushrooms to your dog's diet if you follow these instructions:

At this point, it should be noted that you should not offer your dog mushrooms that have been prepared with other ingredients that are toxic to dogs, such as garlic or onions. Remember that these are toxic foods for dogs that can cause oxidative damage to red blood cells and lead to hemolytic anemia if offered in large quantities.

So, if you decide to offer mushrooms to your dog, make sure they are not accompanied by other ingredients that could be harmful to dogs. You can learn more about this topic in this other article, where we talk about the forbidden foods for dogs.

As we mentioned before, mushrooms that are poisonous to humans are also poisonous to dogs and cause more or less the same symptoms. Although few of the 70-80 species of poisonous mushrooms are actually deadly if ingested, many of these deadly mushrooms bear an unfortunate resemblance to edible species and are therefore particularly dangerous. As a rule (although there are exceptions), mushrooms that have white plates and rings are usually poisonous.

Below we list the most common deadly mushrooms found in the world:

What happens when a dog eats poisonous mushrooms?

Poisonous mushrooms can cause two types of poisoning:

If your dog may have been poisoned, contact a veterinarian immediately; there is no real treatment for eating poisonous mushrooms at home. If there are any mushrooms left, bring one in for identification or take a photo. If you want to know more about what to do if you suspect your dog has been poisoned, read this other article on dog poisoning.

If you want to read similar articles to Can Dogs Eat Mushrooms?, we recommend you visit our Homemade diets category. 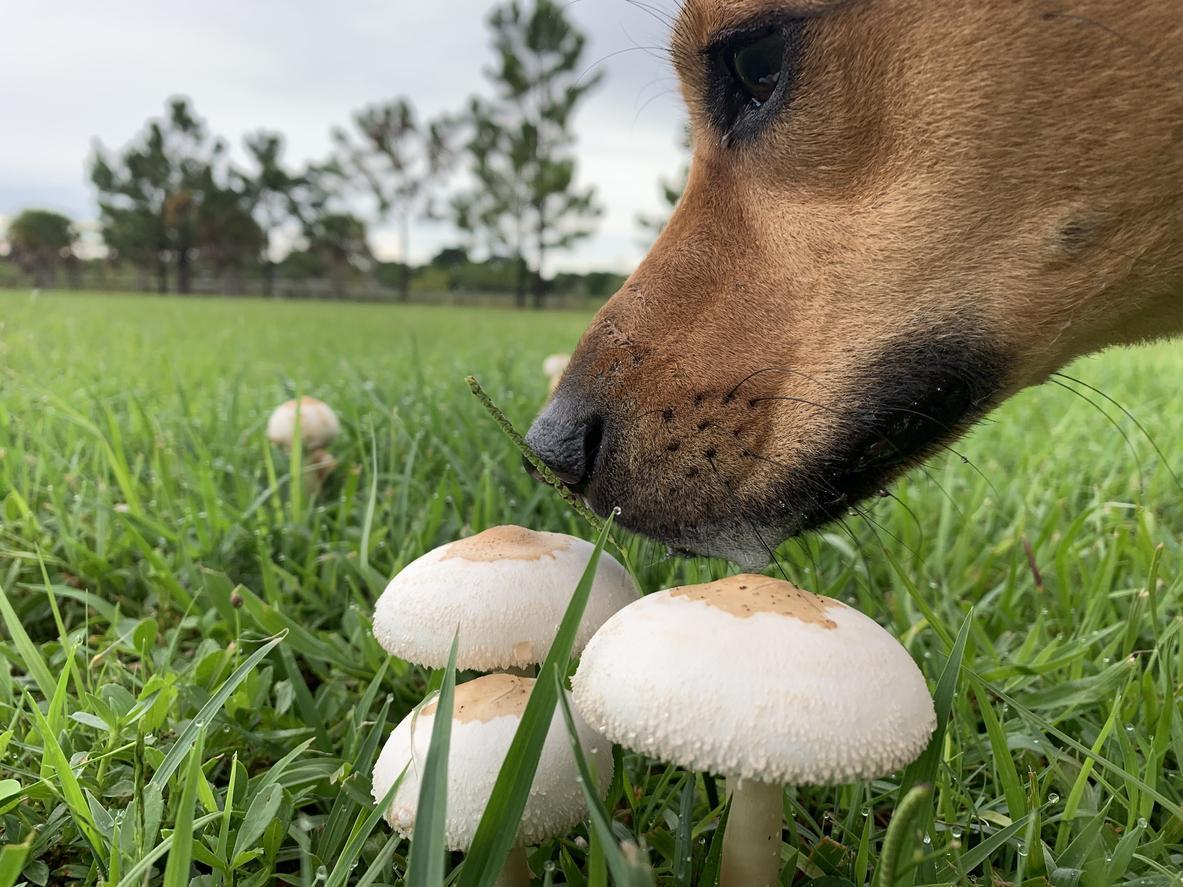 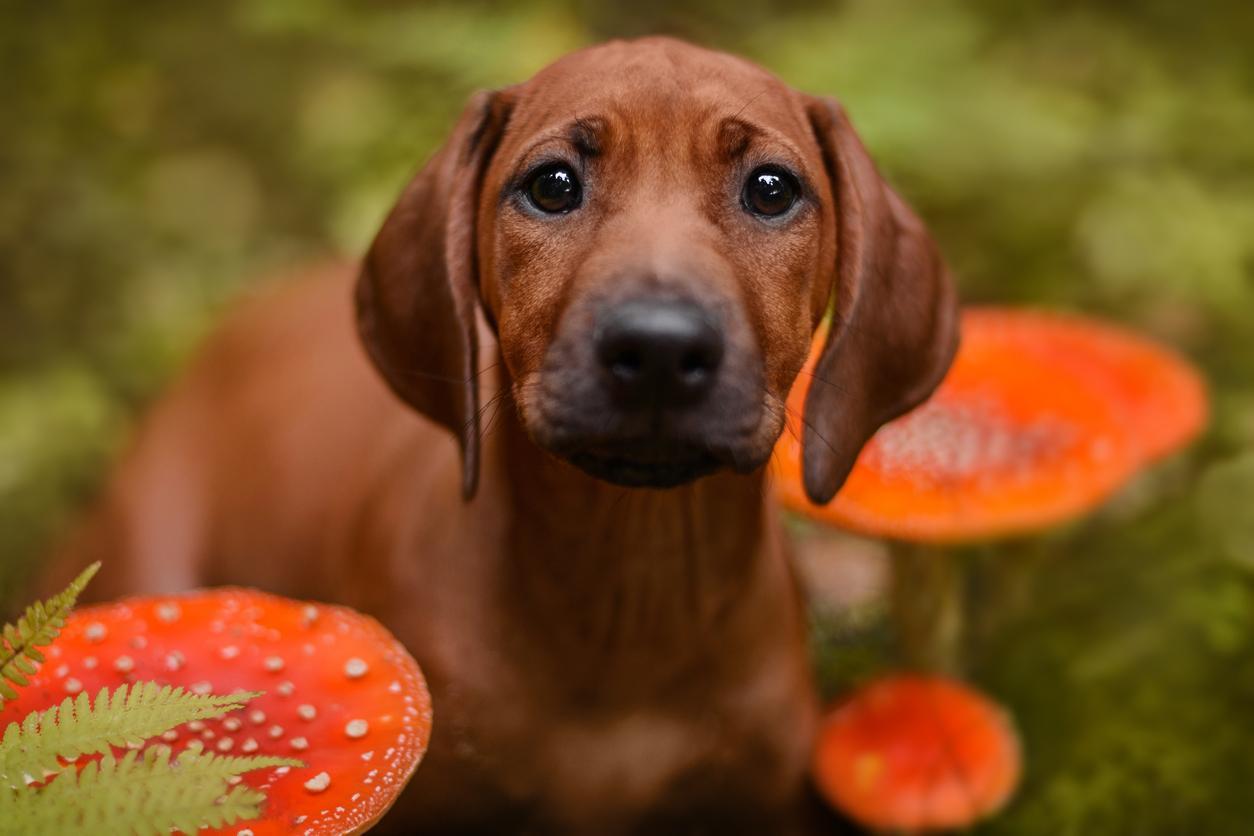 1 of 2
Can Dogs Eat Mushrooms?
Back to top