How to Potty Train your Puppy to Use a Disposable pad

Puppies are not allowed outside until they have received their first vaccinations. One of the most common concerns of puppy owners who bring a puppy home is teaching the puppy to go potty in a specific place so owners do not have to constantly clean up the whole house after the puppy. Some prefer newspaper or artificial grass, but puppy pads are handy because they absorb urine and neutralize odors. In order to teach the puppy to use the pad, we must be patient, as the puppy takes quite a while to learn, which is quite normal.

In this AnimalWised article we will give you some tips and strategies on how to teach your puppy to relieve itself in a puppy pad.

You may also be interested in: How To Train A Chihuahua
Contents

Identify the areas of the house where the puppy usually urinates

Once the puppy begins to adapt and get to know its new home, we will notice that it always tends to relieve itself in more or less specific areas of the house. This is not a coincidence, because puppies choose the places where they feel most comfortable to defecate or urinate. These are usually areas that are far away from where they eat and sleep, and which they make their "bathroom".

The first thing we need to do is locate these places and place liners everywhere. Eventually, we can reduce the number of pads and leave only one while we train the dog to relieve itself on the street. In the beginning, however, it is best to have several pads, as this speeds up learning.

What to do if the puppy breaks the pads?

Although this is usually not the case, it may happen that the dog breaks the pads playfully. At the very moment they start breaking them, it is important to offer the puppy positive alternatives such as age-appropriate toys. This way, the puppy will gradually learn that it is the toy that they can bite.

If you wish to know more abut what are the most appropriate toys for dogs, we recommend you read this article on the best toys for puppies.

Maintaining a more or less set daily routine will help your puppy adjust to the new home more easily, because routines provide a predictable environment. With meal, play, and rest times established, you can learn when the puppy wants to do their business and anticipate that moment by leading them to the area where the papers are placed.

Here are some signs that you can look for to predict when your puppy will need to urinate or defecate:

Whenever you observe any of these behaviors, it is time to direct the puppy to the pad area and keep it there until it relieves itself. There is no need to worry if the puppy makes a mistake and urinates or defecates outside the pad at first. The important thing is that you teach them where they should go when they have an urge to urinate or defecate. The puppy will learn not to go outside the pad gradually as we refine the exercise.

If you are interested in learning more about how to properly train your puppy, keep reading this article on the most common puppy training mistakes.

Use positive reinforcement and avoid punishment

When a puppy starts associating the pad with the "toilet" area, we need to make sure that they use the pad to relieve themselves, and that they do so in the pad and not just near it. Our attitude, as well as the puppy's age and attention span, will determine how long this training will take. Remember that when a puppy is very small, it takes a little longer for them to understand what we are asking them to do.

Every time the puppy approaches the pad and relieves itself there, we give it a lot of social reinforcement such as praise, petting, play and we can even offer a treat.If we are patient, we can reward only the moments when the puppy goes to the mat on its own, so this becomes more and more frequent. If you put two or three mats together, the area will be larger so that the puppy can hit it more easily.

Puppies should never be beaten, punished, or yelled at for doing their business outside the pad; let alone grabbed and have their face brought near urine or feces to tell them not to do it. All we accomplish by doing this is that the dog becomes afraid, fearful of us, takes longer to learn, and may even start performing undesirable behaviors like eating their own feces to avoid punishment. Unfortunately, this is something that many people do, sometimes even on the recommendation of third parties who have no idea about dog training.

To learn more about how to properly train your puppy, do not miss our article on when to start training a puppy.

Eliminate odors in the rest of the house

Every time a dog pees or poops in a certain area of the house, it leaves an odor signal that encourages it to return to that area when it needs to relieve itself again. To avoid this, we should clean the house thoroughly before applying pads and whenever the puppy goes where it does not belong, using enzymatic or active oxygen products. Other commonly used cleaning products such as bleach or ammonia are not able to completely eliminate these odors, and although we cannot detect them, dogs do.

Occasionally, the puppy prefers to urinate on things that smell the most like us, like the sofa, the bed, or some of our clothes. This is also a reaction to an odor stimulus, and we should not discipline it as it is a natural behavior. In this situation, it is advisable to block access to certain areas of the house where the puppy normally relieves itself when unsupervised. Then we need to thoroughly clean the area and continue the training as usual.

When the puppy has learned to relieve itself in the pad and always go there, we can begin to remove some of them. This usually happens when the puppy starts its transition training between peeing and pooping in the pad and outside. If the tendency to go in the pads is greater than during walks, we remove the pads altogether and just reinforce the habit of going outside until it becomes a habit.

The fact that the puppy starts going for walks does not mean that they automatically stops doing their chores at home. Until the puppy is about seven or eight months old, it will still need to go to the pad occasionally, even if it has learned to do so on the street. Once they have complete control of their sphincter, they can resist the temptation of using the pad for several hours until they can go outside.

Remember, even if the puppy has not received all of its vaccinations and therefore cannot be walked regularly, it is important to take it outside in your arms or in a backpack or carrier. As part of the socialization phase, it is important to expose the puppy to the sounds and stimuli he will encounter outside. Failure to do so can result in the development of phobias and significant behavior problems.

Learn more about the importance of socializing dogs since they are young in this article on socializing puppies.

If you want to read similar articles to How to Potty Train your Puppy to Use a Disposable pad, we recommend you visit our Basic education category.

How to Train Your Schnauzer
Training Your Dog to Use a Muzzle
How to Leave a Puppy Alone - Training and Tips!
How to Train a Dog to Pee in One Place
Related categories
Behavioral problemsSportsAdvanced educationAnimal games and fun
Most read
1.
My Dog Is Aggressive After Neutering
2.
Tips to Train an American Bully
3.
Why Is My Dog Suddenly Scared Of Me?
4.
How to Stop Your Dog From Peeing Inside at Night
5.
How To Stop My Cat From Biting My Ankles
6.
Why is my Dog Pooping in the House Suddenly?
7.
Best Time of Day to Walk Your Dog?
8.
How to Make a Pit Bull Release its Bite
How to Teach a Puppy to Fetch
When to Start Training a Puppy
How to Teach your Dog to Walk Beside You
How to Discipline Your Rabbit With Positive Reinforcement
How to Train Your Cat to Give their Paw
How to Teach Your Dog Not to Urinate at Home
Can Pet Rabbits Be Potty Trained?
How to Teach your Dog to Drop Objects

How to Potty Train your Puppy to Use a Disposable pad 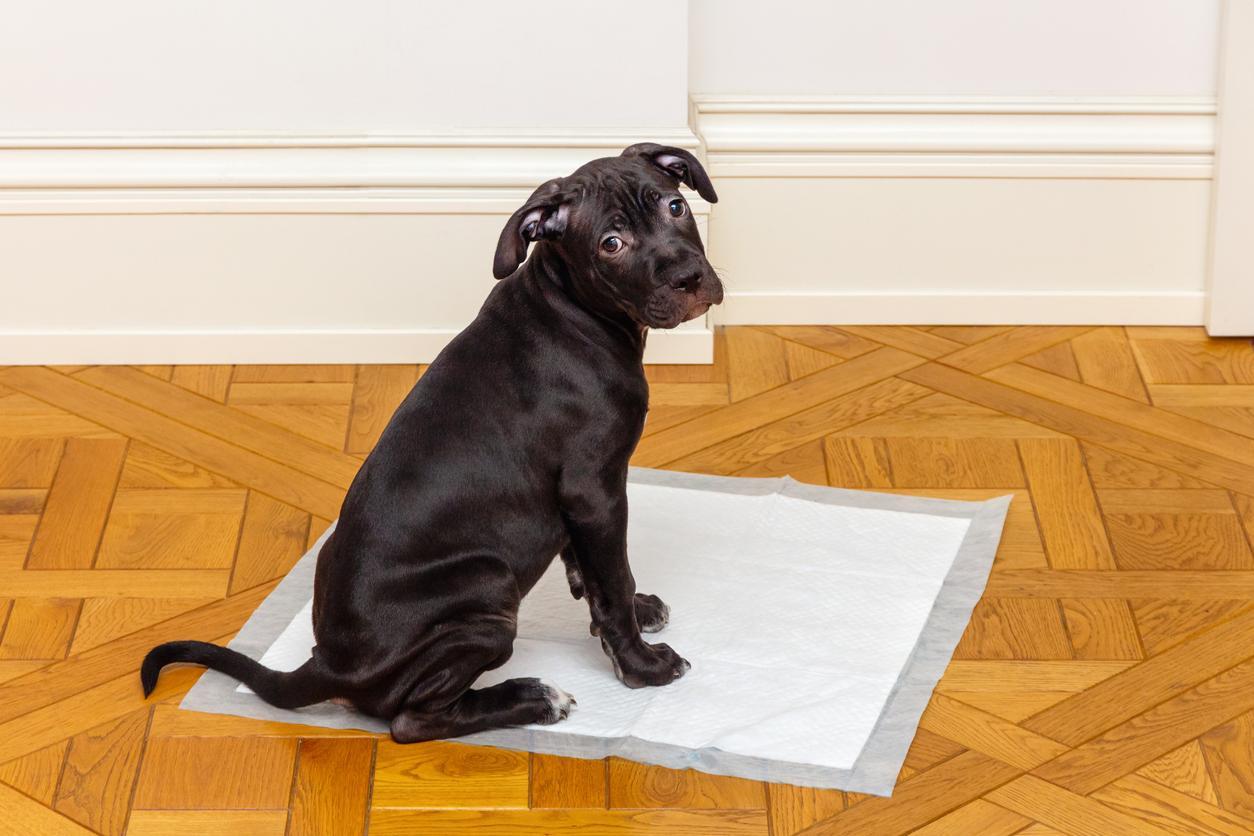 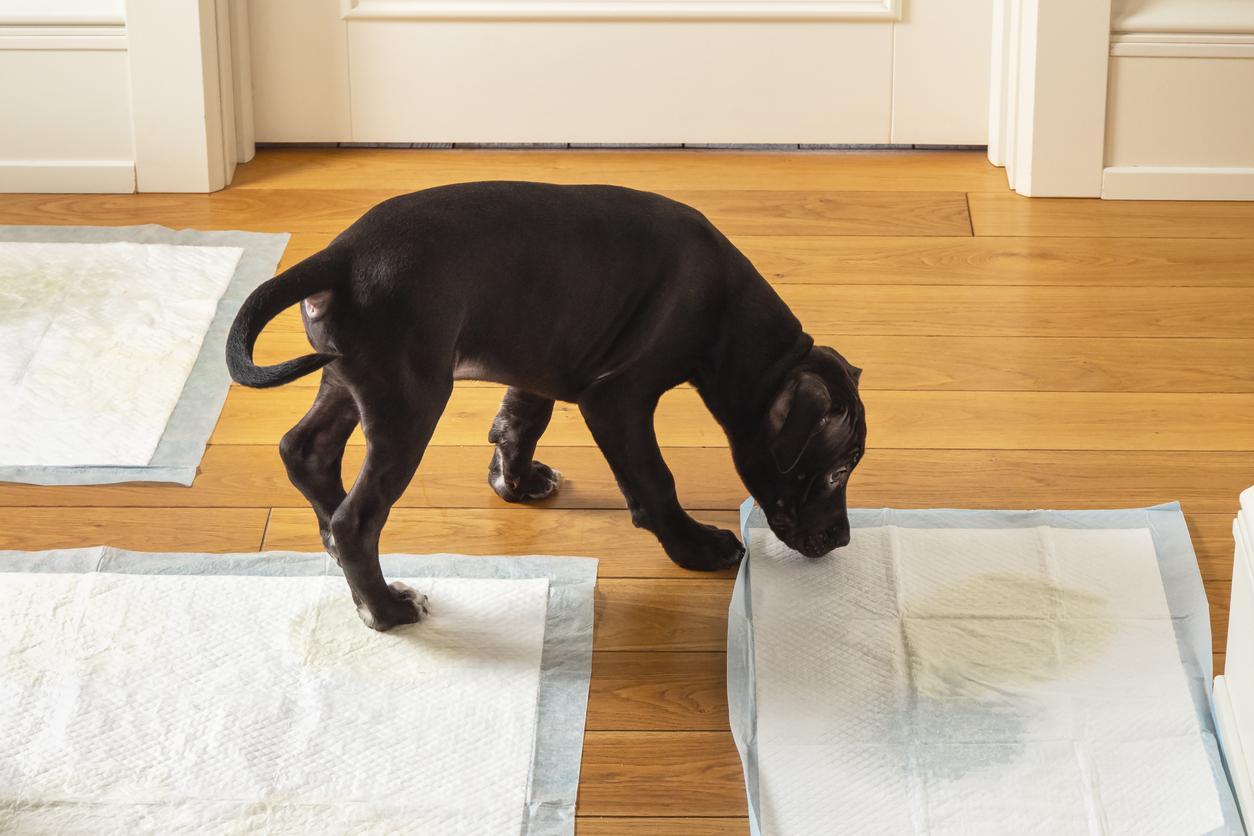