My Dog Has Pimples - Is it Canine Acne?

When we think of pimples, we might have the stereotype of an oily teenager with acne in mind. Dog acne isn't something we necessarily associate with dogs. This is partly because they are covered in fur and we might not even think to check their skin underneath. This is a common mistake guardians make with their dogs. It can mean we don't even see pimples on dogs until they are large enough to be seen through their coat. Early detection of any changes in a dog's skin condition will mean a better prognosis once the cause of the problem has been determined.

If your see that your dog has pimples, you may wonder if it is acne. However, there are many different causes of dog pimples, so it is important to look at where on he body they appear as well as any concurrent symptoms. AnimalWised looks into these causes of dog pimples as well treatment for their removal.

You may also be interested in: Folliculitis in Dogs - Causes, Symptoms and Treatment
Contents

My dog has pimples on their chin

As we said we may not associate acne with dogs, but if your dog has pimples, this could be the cause. This is particularly the case when the dog is younger and transitioning between being a puppy and an adult dog. You can see acne under a dog's chin, on their lips or around their snout. Acne is caused by hair follicles becoming clogged with oils and dirt, the latter often being dead skin cells. The result is pimples growing on the skin, often inflamed and red. They may even ooze pus if left untreated.

There is a possible genetic factor with acne in dogs. This is why certain breeds seem to get acne more than others. Boxer dogs and Bulldogs seem most prone to the condition. The belief is that they are predisposed to producing more sebum from their sebaceous glands. This leads to pores being more easily clogged and resulting in acne. Sebum production is linked to hormone levels which is why acne in dogs, as with humans, occurs most often when they start reaching sexual maturity.

Treatment consists of keeping the area clean and bathing with antibacterial products suitable for dogs. You should ask your veterinarian for recommended suitable shampoo. They may also recommend medicated shampoo in more acute cases. However, not all canine acne will respond to this treatment. Some may become infected and will require antibiotics. In milder cases, the acne may resolve itself on its own.

While dog acne most commonly manifests itself in pimples under the chin, it can present on other parts of their body. Pores can become clogged in the genital areas which is why you may see dog pimples around testicles or near the base of a dog's penis. Treatment will be the same as above, but there are other causes of pimples in dogs which might better explain it.

My dog has pimples on their paws

If you see your dog has pimples on their feet, or even further up their legs, it is possible they have a skin condition known as pododermatitis. This is a pathological condition which manifests in inflammation, resembling pimples on the dog's paws. A review of pododermatitis in dogs from 2016 points out that it “may or may not be accompanied by other dermatologic or systemic clinical symptoms”[1].

Podoermatitis can occur in between the individual digits on the paw which might be more difficult to see, but can lead to the dog biting their paws. This may result in bacterial infections with a symptom of interdigital pyoderma. In these cases, the paw will become swollen with large ulcerative and pus will come out. Swelling is also common.

Causes of this skin condition could be from poor hygiene, physical trauma to the skin, allergic reactions, parasitical infestation or bacteria. It may also be exacerbated by genetics as breed plays a part, Bulldogs, Boxers, Great Danes and Dachshunds being more likely to develop the condition. Dogs with suppressed immune systems are also particularly susceptible. To diagnose the problem, the vet will give the dog an examination and treatment will depend on the underlying cause.

My dog has pimples on their anus

Abscesses can also vary in size, so some of them will start off my looking like a pimple. As they develop, pus will build up and this may need to be lanced. Lancing an abscess can be very painful and will need to be carried out by a veterinary medical professional. Other treatment such as antibiotics may also be required.

My dog has pimples with pus coming out of them

The bacteria which collects is often part of the Staphylococcus family which may result in a staph infection. Staph infections are also one of the most common zoonotic diseases in dogs[2], meaning they can be passed on to humans. Abscesses can also prevent the dog from engaging in certain activity such as eating or exercising. Both can result in severe compromises to the dog's overall health. Treatment generally includes draining, disinfection and prescribing antibiotics.

Pimples in dogs caused by parasites

Fleas, ticks and other parasites might explain why your dog has pimples on their skin. Ticks are parasites which leave feed externally on the dog's skin, usually in area where there is least fur. This is why you might see pimples on a dog's stomach. If they are removed improperly during feeding, it is possible they will leave their head in the skin of the dog. If this occurs a red pimple or small abscess will likely develop.

The areas of the body where ticks might commonly attack are around the ears, the belly, on the neck or between their paws. They may resolve themselves on their own, but equally they may become infected and and develop pyoderma. This may abscess and require the aforementioned treatment. The dog may also need to be tested for certain conditions such as Lyme disease.

Fleas also feed externally on the blood of dogs. When they do so they may cause pimples to appear. Pimples caused by fleas will most likely appear in the lumbosacral (lower back), perineal and abdominal areas as well as on the back of the legs. The dog will also likely experience hair loss due to scratching, making the pimples more prominent. if left untreated the skin can darken and thicken. Treatment will be for the symptoms as well as deworming to rid the dog of the parasite.

If we see many red pimples, then flea infestation is a common cause. You will also likely see the fleas themselves which will be either black or brown specks which crawl through the dog's fur.

If your dog has pimples on their skin on areas with little fur such as the belly, it is possible they have come in contact with an irritating substance. For example, if the dog has pimples on their testicles, it could be due to siting on the floor which has an irritating substance on it. Another area where these pimples may appear is linked to the acne we discussed above. When the dog uses plastic drinking bowls or feeders, the contact under their chin can lead to spots causes by contact dermatitis.

This is why it is important to look at the area where the pimples occur. The area will also be affected by their ability to scratch. If the dog can reach it easily to scratch or bite the area, then they will do so. This can lead to breaking of the skin and introduce more bacteria to the area. Dermatitis also leads to flaky, dry and scaly skin which may present alongside the pimples. Any dermatological lesions should be treated by antibiotics and anti-inflamatories as prescribed by the vet.

My dog has pimples all over their body

The causes we have mentioned so far usually lead to localized pimples and spots in certain areas. They may result in abscesses or be caused by cysts or tumors. This is one reason we suggest you don't burst the pimples on your own. It is best for a veterinarian to examine first to determine the best course of treatment.

If we see there are pimples all over the body it may be due to folliculitis. This is when the hair follicles on the skin become infected and inflamed. It can occur on any part of the body and can sometimes spread all over the dog's skin. It appears as a rash at first, but the pimples can then develop pus if they become infected. It is due to a bacterial, viral or fungal infection. It can be very annoying and itchy for the dog leading to stress symptoms as well as the physical ones. Treatment of folliculitis is usually a combination of antibacterial washes, antibiotics and lifestyle changes.

If you want to read similar articles to My Dog Has Pimples - Is it Canine Acne?, we recommend you visit our Skin problems category.

My Cat Has Scabs - Skin Conditions in Cats
Feline Acne - Causes, Symptoms and Treatment
My Cat Has Black Spots on His Lips and Nose
My Cat Has Bald Spots Above Their Eyes
Related categories
Degenerative diseasesViral diseasesEye problemsHome RemediesBreathing diseasesIntestinal problems
Most read
1.
What to Do if My Dog has Something Stuck in his Throat?
2.
My Dog Is Bleeding from His Penis
3.
My Dog Keeps Licking Her Private Area - All Possible Reasons
4.
My Dog Has Pus Coming From His Penis
5.
Why Does My Cat Push Out His Penis and Lick It?
6.
My Cat Has Liquid Coming From Their Anus
7.
My Dog's Poop Starts Solid Then Goes Soft
8.
My Dog Keeps Making a Gulping Sound
Why Does My Cat Have Black Dandruff?
Calcinosis Cutis in Dogs - Calcium Deposits in Dog Skin
My Dog Has Hives - Symptoms, Causes And Home Remedies
My Cat Has a Floppy Ear
My Dog's Paws Are Red
Why Does My Dog Have Irritated Skin?
My Cat Has Warts - Types, Causes and Treatment
Why Does My Dog Have Black Skin?

My Dog Has Pimples - Is it Canine Acne? 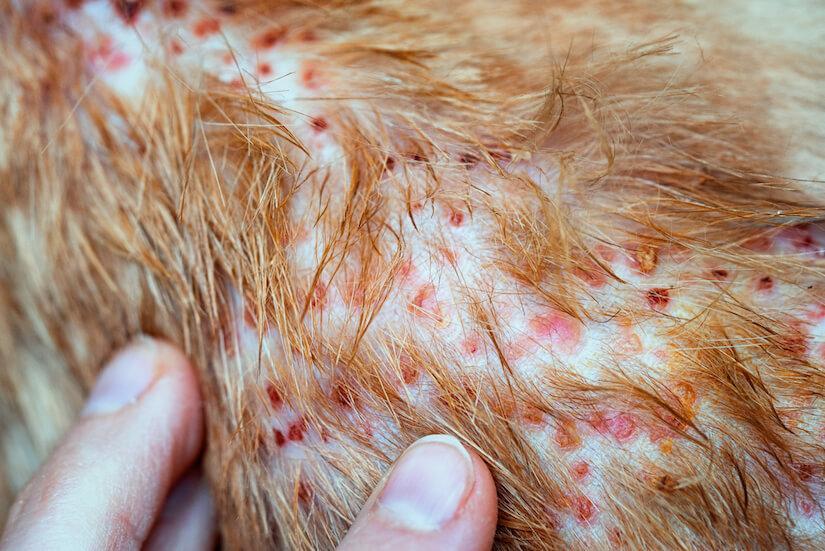 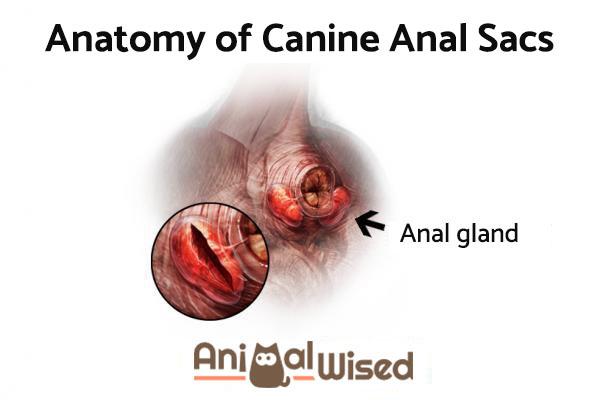 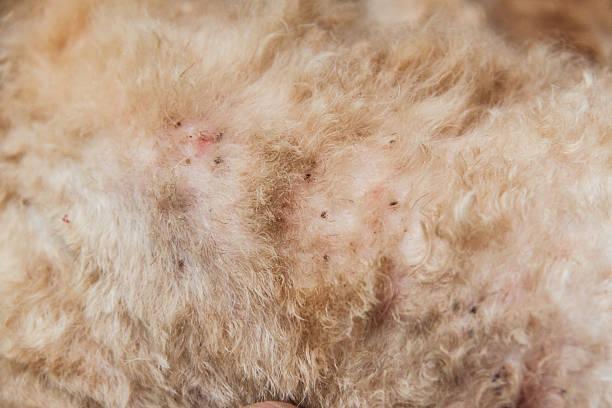 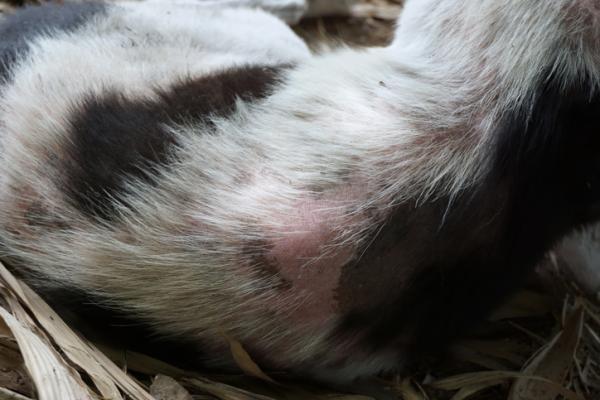