Why Does My Dog Have Swollen Testicles? 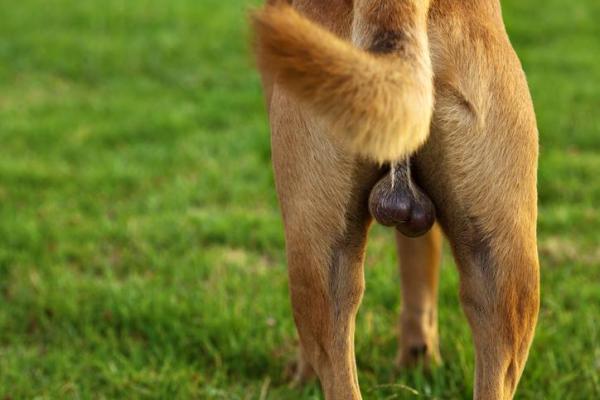 Testicles are one of the most sensitive areas on a dog's body. Especially outside where there are many obstacles and interactions, there are many possible instances where they can be injured. This could be trauma of contact with shrubbery or something else in their environment. Equally, it could be irritation from sitting in substance they shouldn't have. However, the problem doesn't always come from external sources, so we should be considerate of other possible pathological causes.

AnimalWised looks into why your dog has swollen testicles, suggesting possible causes and if there is action which needs to be taken. From the outset, we would like to stress the importance of sterilization for the benefit to your dog's general well-being and to prevent this specific testicular problems.

You may also be interested in: My Cat Has Swollen Testicles - Causes and Treatment
Contents

Anatomy of a male dog's genitals

Male dogs mature between the ages of 6 and 12 months, depending on the breed. In general, the larger the dog, the longer it will take for them to reach sexual maturity. The male canine reproductive system is comprised of the penis and the testicles, as well as the various ducts and tubes used to transport sperm and other fluids between them. The penis is covered by a prepuce, something equivocal to the human foreskin. The testicles are enclosed in the scrotum which should descend sometime around 2 months of age, but can often be delayed to around 6 months.

Both testicles should be firm, of a similar size, oval in shape and have regular consistency. The testicles should be housed in the scrotum. If they are not visible or you cannot feel them, they may still be inside the body. This could be due to a condition known as cryptorchidism, one of the most common genital defects in dogs[1]. This has various causes, but it will most likely mean the dog is sterile. If only one of the testicles hasn't descended into the scrotum, this is known as monorchidism. These dogs may be more likely to be fertile, so you will need to take precautions. If a dog's testicles have descended, but are particularly small in size, testicular hypoplasia may be present.

If your dog's testicles have become swollen or enlarged, then it is possible there is an infection. The general term for inflammation of the testicles is orchitis. Its most common origin is a wound or injury to the testicle itself. These injuries could be sustained during a collision with an object, a fight with another dog or even by frostbite or burning. An ingrown hair can also be the cause of testicular inflammation.

Irritation to a dog's testicles could be from contact with a toxic plant or to a chemical substance which comes in contact with them. Infection will occur leading to inflamed and red testicles. From this initial infection, bacteria can travel to different parts of the body. In particular, it can spread through the spermatic cord.

Symptoms of orchitis in dogs

If your dog has inflamed testicles due to orchitis, we will likely notice the area is also painful or, at the very least, sensitive. If the dog's testicles are swollen, they will usually lick the area frequently. The increase in size and associated pain will lead them to be uncomfortable. This means they may have trouble walking, sitting or lying down. You may not notice that both testicles are inflamed. Most commonly, one testicle will be enlarged and not the other. Although, both testicles may inflame as the infection spreads.

Treatment of orchitis in dogs

If we notice that our dog's testicles have become inflamed, you will need to take them to the vet. Treatment will depend on the diagnosis, but if an infection is confirmed, the most likely treatment will be the administration of an antibiotic. This antibiotic will be specific to canines and a vet is needed to give the right prescription after assessment.

It may also be likely the vet will prescribe an anti-inflammatory to reduce the swelling and pain. A gauze soaked in cold water may be applied to provide some temporary relief, but our vet will need to assert this is helpful. An Elizabethan collar may be given to prevent the dog from accessing the testicles and exacerbating the situation.

The consequences of orchitis

If our dog has orchitis, it is possible that the testicle will decrease and harden after the inflammation has been adequately controlled. After this happens, it is unlikely sperm will be able to be produced. In some cases, the infection may have progressed to the stage that it cannot heal and the removal of the testicle is recommended (known as an orchiectomy).

Removal of the testicles is often performed preemptively as a means of sterilization. The benefits of this procedure have been recorded as reducing certain behavioral problems as well as reducing the likelihood of some diseases[2]. There are potential side effects, but it is generally accepted by the veterinary community to improve their state of well-being.

Testicular tumors in dogs are more prevalent in dogs with undescended testicles, being relatively rare in dogs with testicles which have descended. In these cases, we often see that the dog's testicles are larger than they should be, are of a harder consistency and feel irregular to the touch. Some tumors do not cause an increase in size, but will change the consistency of the testicle. Some may create the feeling of nodules over the testicle.

Certain canine tumors can produce estrogens, a type of female hormone which can lead to the dog displaying features more typical of female dogs. This is why a male dog with tumors on their testicles may have enlarged or swollen breasts. They may also have looser skin on their prepuce or lose hair in this area. The treatment for testicular tumors in dogs is usually surgery in the form of an orchiectomy. This is why it is so important any change to the testicles should be reported to the vet.

If you want to read similar articles to Why Does My Dog Have Swollen Testicles?, we recommend you visit our Reproductive system diseases category.

There is a Lump on My Dog's Testicle
My Dog Has a Swollen Penis - Dog Penis Problems
My Dog Has Pus Coming From His Penis
My Female Dog Has Clear Discharge
Related categories
Other health problemsDegenerative diseasesNeurological diseasesBacterial diseasesPreventionDe-worming
Most read
1.
Can I Bathe My Dog After Vaccination?
2.
My Dog Is Bleeding from His Penis
3.
My Dog's Poop Starts Solid Then Goes Soft
4.
My Cat Has Liquid Coming From Their Anus
5.
What to Do if My Dog has Something Stuck in his Throat?
6.
My Dog Has Pus Coming From His Penis
7.
Myiasis In Dogs - Symptoms, Removal And Treatment
8.
Why Does my Dog Have Swollen Breasts?
My Dog Keeps Licking His Butt and It Smells
My Dog Has a Growth on Her Vagina
My Cat Keeps Licking Her Private Area
Symptoms of Prostate Cancer in Dogs
My Dog Has Vaginal Discharge
My Female Dog Has Green Discharge
My Dog Is Bleeding from His Penis
Balanoposthitis in Dogs - Causes, Symptoms and Treatment

3 comments
Rating:
Evi
19/12/2021
My dog had an infection on his testicles a while ago. He was treated by the vet and he's clearly better and acting normal, his testicles have shrunk down quite a bit but they are not their usual size. I would like to know if they will shrink more or just remain larger than most dogs. Thanks.

That's a good question. These are slightly swollen, but you can find some dogs will have quite large testicles. This is especially the case when there are dogs in heat around.
Rating:
Black kie
10/01/2020
My dog became very tired and look like bot healthy.. because him teo balls 1 balls only had swelling.. what can I do

Administrador AnimalWised
10/01/2020
Take them to the veterinarian is our only suggestion!
Why Does My Dog Have Swollen Testicles? 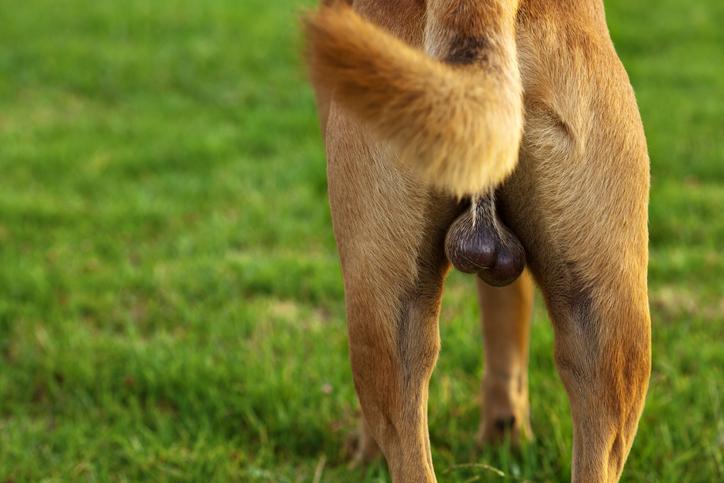 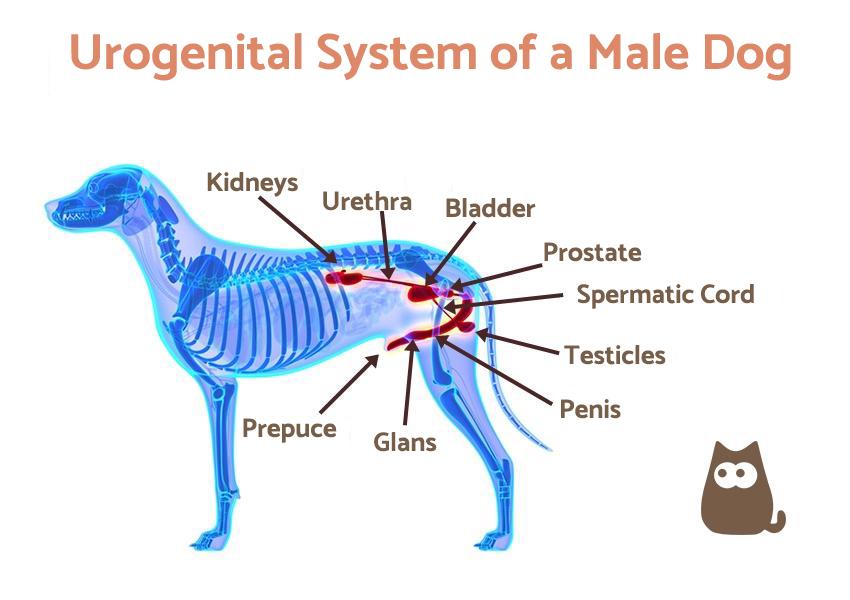 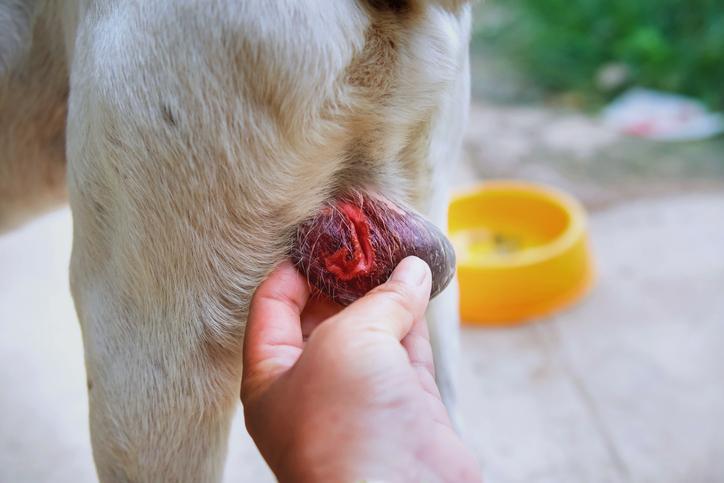 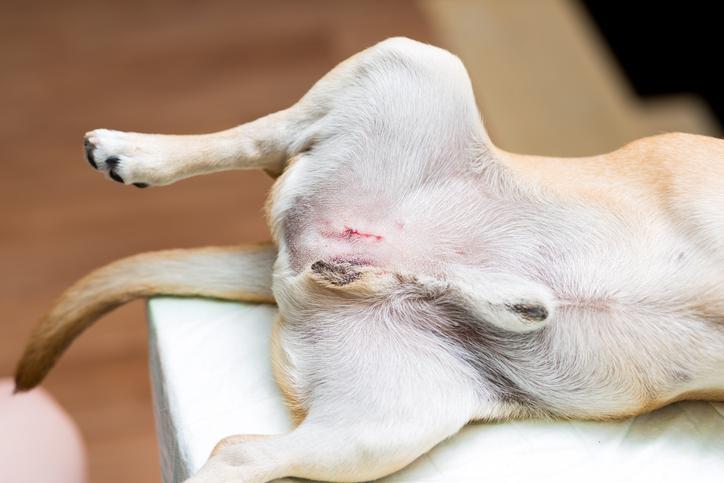 1 of 4
Why Does My Dog Have Swollen Testicles?
Back to top