My Dog Is Aggressive After Neutering

Some guardians decide to neuter their dog as a means to resolve aggression issues. This aggression is often developed over time. Many of these guardians are surprised when the issues are not resolved after the procedure has been carried out. In fact, it is even possible for aggression to develop after neutering in dogs which never showed it before.

In this AnimalWised article, we review the causes of this behavior, as well as the solutions which can prevent this difficult problem. The risk an aggressive dog can pose means stopping this behavior is essential. Find out why my my dog is aggressive after neutering and what you can do about it.

You may also be interested in: Why Is My Dog Aggressive Towards Other Dogs?
Contents

What is aggression in dogs?

When we discuss aggressiveness in dogs, we refer to the behaviors which pose a threat to other animals or people. It is one of the most serious behavioral problems in dogs due to such threat. An aggressive dog will display their aggressiveness in various ways, not all of them as obvious as others. They can growl and snarl their lips, but they may also bristle their hair and turn their ears back. Biting and attacking are the most concerning behaviors.

Aggression arises when the dog's response to a situation causes insecurity or conflict. Their reaction is a means to take back control. In other words, an aggressive reaction is the means to free themselves from the stimulus which makes them feel threatened. It is a self-reinforcing behavior. When a dog is aggressive and others stay away from them, they are more likely to repeat it. Aggression in dogs is one of the most common reasons for dog abandonment.

There are multiple causes that can lead to aggressiveness shown by a dog, such as fear or defense of resources. We may also witness aggressive behaviors when males are confronted by a female in heat or vice versa. Females can compete over a single male just as males do the same for a female. This is why neutering is often seen as the best solution to aggression problems in dogs. As we will see, there are other causes which require different solutions.

Does neutering stop a dog being aggressive?

The hormone testosterone can act by encouraging certain aggressive behaviors. Neutering differs according to sex. Castrating a male dog removes their testicles. Spaying a female dog removes her ovaries and uterus. For this reason, neutering only affects sexually-dimorphic behaviors, i.e. those which depend on the action of sex hormones on the central nervous system. Examples include territorial marking behavior or intrasexual aggressiveness, meaning aggression towards the same sex.

In females, spaying can help the dog avoid aggression linked to periods of reproductive activity. Since they are unable to reproduce they won't experience phantom pregnancy or try to compete with other dogs. It should be pointed out that the results of neutering are variable between individuals. Although we can point to likely outcomes, we cannot guarantee a dog's behavior. Previous experience of the animal, age and other circumstances are also influential.

Additionally, the effects of neutering on a dog can take time to manifest. This is due to the differing time it takes for the testosterone to leave the body.

Why has my dog become aggressive after neutering?

If we have neutered our dog and notice they become aggressive, it does not have to be related to a behavioral problem. Some individuals return home stressed, disorientated and in pain. An aggressive reaction may simply be a valid reaction from a traumatic event. In these cases, the aggression should disappear in a couple of days or improve with pain management treatment.

When a dog shows aggression related to sexually dimorphic behaviors, they should be under control a few months after being neutered. However, we should also take other measures to ensure stable behavior. However, in females, spaying can increase aggressive reactions. It is most common in bitches which have been neutered very young, i.e. before they are 6 months of age.

For dogs which react aggressively to strangers before they are neutered, this behavior can worsen. This is because estrogens and progestogens help inhibit aggression in female dogs. Eliminating them can also eliminate these inhibitions. This is why there is some controversy in neutering aggressive female dogs. However, if a dog is aggressive after surgery, it is likely not related to the hormones which have been eliminated.

If you want to read similar articles to My Dog Is Aggressive After Neutering, we recommend you visit our Behavioral problems category.

My Neutered Cat Is Spraying Everywhere
Aggression In Rabbits - Causes
Why is my Dog Aggressive with People? Causes and Solutions
Why Is My Pit Bull Becoming Aggressive?
Related categories
SportsBasic educationAdvanced educationAnimal games and fun
Most read
1.
How to Stop Your Dog From Peeing Inside at Night
2.
Tips to Train an American Bully
3.
Why Is My Dog Suddenly Scared Of Me?
4.
How to Make a Pit Bull Release its Bite
5.
Why is my Dog Pooping in the House Suddenly?
6.
What Does It Mean When a Dog Lifts a Front Paw?
7.
How To Stop My Cat From Biting My Ankles
8.
The 6 Levels of Dog Bites - The Dunbar Bite Scale
Why is My Dog Suddenly Aggressive Towards Me?
Why is my Cat Aggressive with Other Cats?
My Neutered Cat Keeps Marking
How To Stop Food Aggression in Dogs
My Dog is Marking in the House
How To Calm An Aggressive Cat
My Dog is Possessive of Resources
12 Types of Dog Aggression

My Dog Is Aggressive After Neutering 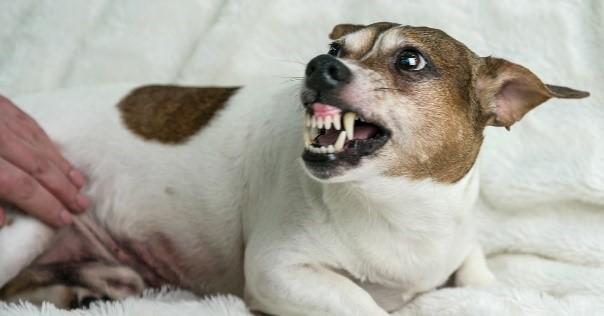 My Dog Is Aggressive After Neutering
Back to top