It is a mistake to treat dogs as if they were humans. They do have their own personalities and we can love them like family, but they have canine needs and behaviors which shouldn't be contradicted. For some, this leads people to believe dogs can be aggressive when playing and it doesn't mean anything. While it is true dogs can get very boisterous when playing, aggression is not something which can be tolerated. This is for the benefit of the dog which is being aggressive as much as it is other dogs and people.

At AnimalWised, we understand why my dog plays too rough. We do so by looking what constitutes rough play in dogs and what causes might lead to a dog being aggressive when they play.

Is it normal for dogs to play rough?

Some of us can be a little too protective of our dogs. When dogs see other dogs when outside, they will want to interact. Only a slim minority of these interactions will be rejected. Most will sniff each other, play together or even ignore them for some other stimulus.

When the dogs play, they will often adopted a particular position where they bend down and wag their tail. This is a clear invitation to play. It can also be accompanied by barking and maybe a little growling, but the dog does not seem scared or aggressive. The dogs may even appear to bite the other dog's ears or pin them down to the ground, but neither dog should be in any danger.

This kind of play can seem like it might be rough, but it is actually normal and a healthy expression of their innate behaviors. They use these interactions to assert their social rank, as well as to practice their skills. It is also simply a way to have fun.

However, there are some dogs which will play too rough. In these cases, one dog may be bigger, more energetic or even more forward than the other. One of the dogs might be generally anxious, so the other dog is playing too rough for their sensibility, even if it would be fine for another dog.

Rarely, one of the dogs might be aggressive with the other. They may feel as if they are being threatened and will be aggressive as a way to defend themselves. In these cases, the dog will stop playing and start to fight. For some of us, it can be a little tricky to know when one dog is play fighting or another is fighting for real.

When a dog is fighting for real, the dog will show signs of aggression such a laying their ears flat against their head, moving slowly around the other dog and snarling violently. For any dog guardian with experience, it will be fairly obvious when a dog moves from play behavior to aggression, but it is always important to look at the context. For more background information, take a look at the different types of dog aggression.

My puppy plays too rough

Once a puppy becomes aware of their surroundings, they will become aware of their siblings around them. Although their mother will provide guidance, they do not need any training to initiate play behavior with the other puppies. They will roll over on each other, nip at ears, growl cheerfully and perform many of the other play behaviors indicative of puppies.

Play behavior in puppies is essential for their physical, cognitive and social development. Through this play, they learn how to communicate through visual signals and vocalizations, making their own signs and interpreting others. A very important factor they learn in terms of rough play is bite inhibition. This is when the dog knows at what point they should stop putting pressure on a bite. They usually learn when their mother or sibling fights back when they have bitten too hard. Regulating their bite intensity is also important when interacting with other animals and humans.

For these reasons, it is very important a dog is properly socialized. Puppies need to be kept with their mother and siblings for a minimum of two months, ideally up to 12 weeks. This period is very important for their learning and socialization. Without it or with an inferior socialization period, the puppy may not learn how to inhibit their bite, so their play becomes too rough when they encounter other dogs.

Once the puppy has been weaned and it is time for them to leave their mother, we should know how they will behave when in our home. As with young children, a puppy will be learning their boundaries in new situations. They may growl, play rough and even bite us a little too strong. This is because they have not yet learned how to interact properly in this new environment, so the socialization of the puppy will need to continue.

We need the puppy learn not to play too rough and bite too hard with both other dogs and their human guardians. Some dogs may learn more quickly than others, but they will all need to learn for them to live in our home without problem. Take a look at our article on how long it takes for a puppy to adjust to a new home for more information.

My adult dog plays too rough

While it is normal for a puppy to play a little too rough once they enter the home, they should be able to adapt eventually. However, once they become mature, they should be able to adapt to their new environment. This means they will learn boundaries, develop a routine and learn how to play safely. When an adult dog plays too rough, it is usually due to one of the following:

There are other factors which can lead to behavioral problems and inappropriate play, but the above are the main factors. Some claim that breed is an important factor. While some breeds do tend to be more rough than others, education and experience are more important. Still, there are some breeds which may require more training than others, so we need to be sure we can meet the responsibility of their care.

How to know if a dog is playing too rough

To know whether your dog is playing too rough, you will need to look at their body language. Dogs use various signals to convey their feelings. These include their tail position, their facial expressions, body posture and more. A dog will make various signals when they are happy, as well as if they are sad, angry or any other emotion.

By looking at looking at a dog's body language, we can know if the dog is playing rough or simply having fun. Each dog will be able to tell intuitively from another canine whether they pose a threat, but we need to learn and pay attention. Vocalizations can be difficult to determine as an excited yelp may sound similar to an angry one.

The postures and signs a dog makes when they are fearful are known as calming signals. They are used to try to deflate a confrontation, as well as to show the other dog they will attack if provoked. These are important to know. If they appear when the dog is playing rough, it could lead to a dangerous situation.

What to do if my dog plays too rough

If your puppy is playing rough, we need to remember it is an important part of their development. Intervening will usually prevent the puppy from learning their boundaries and may affect bite inhibition in later life. Only if we think the puppy is in any real danger should we stop them from playing with each other.

When your adult dog is playing too rough, then we need to understand why. If you have recently adopted an adult dog, we may not know if they have had proper socialization, have experienced trauma or have received insufficient training. For this reason, we will need to find ways to bolster their education.

Teaching basic commands and socializing the dog with others are the best place to start. However, if the dog is aggressive and we are unsure why, it is best to speak to a professional. Take them to a veterinarian to ensure there is no underlying health concern and then speak to a canine educator or ethologist. They will be able to provide practical ways to encourage appropriate play which are suitable for each individual dog. 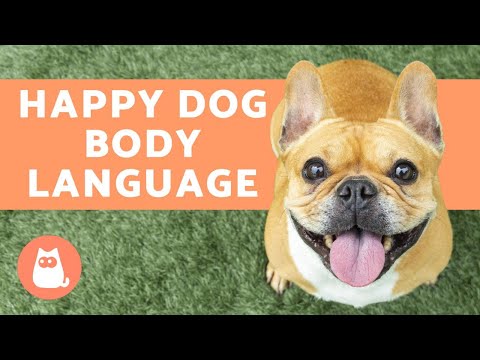 If you want to read similar articles to My Dog Plays Too Rough - Stop Aggressive Play, we recommend you visit our Basic education category.

How to Stop My Dog from Climbing on the Sofa
How to Teach your Dog to Drop Objects
Why is My Puppy Biting and Growling?
Why Does My Dog Nibble on Me With Its Front Teeth?
Related categories
SportsBehavioral problemsAdvanced educationAnimal games and fun
Most read
1.
My Dog Is Aggressive After Neutering
2.
Tips to Train an American Bully
3.
Why Is My Dog Suddenly Scared Of Me?
4.
How to Stop Your Dog From Peeing Inside at Night
5.
Best Time of Day to Walk Your Dog?
6.
How To Stop My Cat From Biting My Ankles
7.
How to Make a Pit Bull Release its Bite
8.
Why is my Dog Pooping in the House Suddenly?
My Cat Is Climbing the Furniture
Tips to Leave my Dog Home Alone Safely
My Dog Is Scared of Water
Bite Inhibition in Dogs
My Rabbit Is Biting Me All of a Sudden
My Guinea Pig Bit Me - Why & How to Stop It
Why Do Dogs Like Their Belly Rubbed?
Tips to Stop a Cat from Meowing all the Time 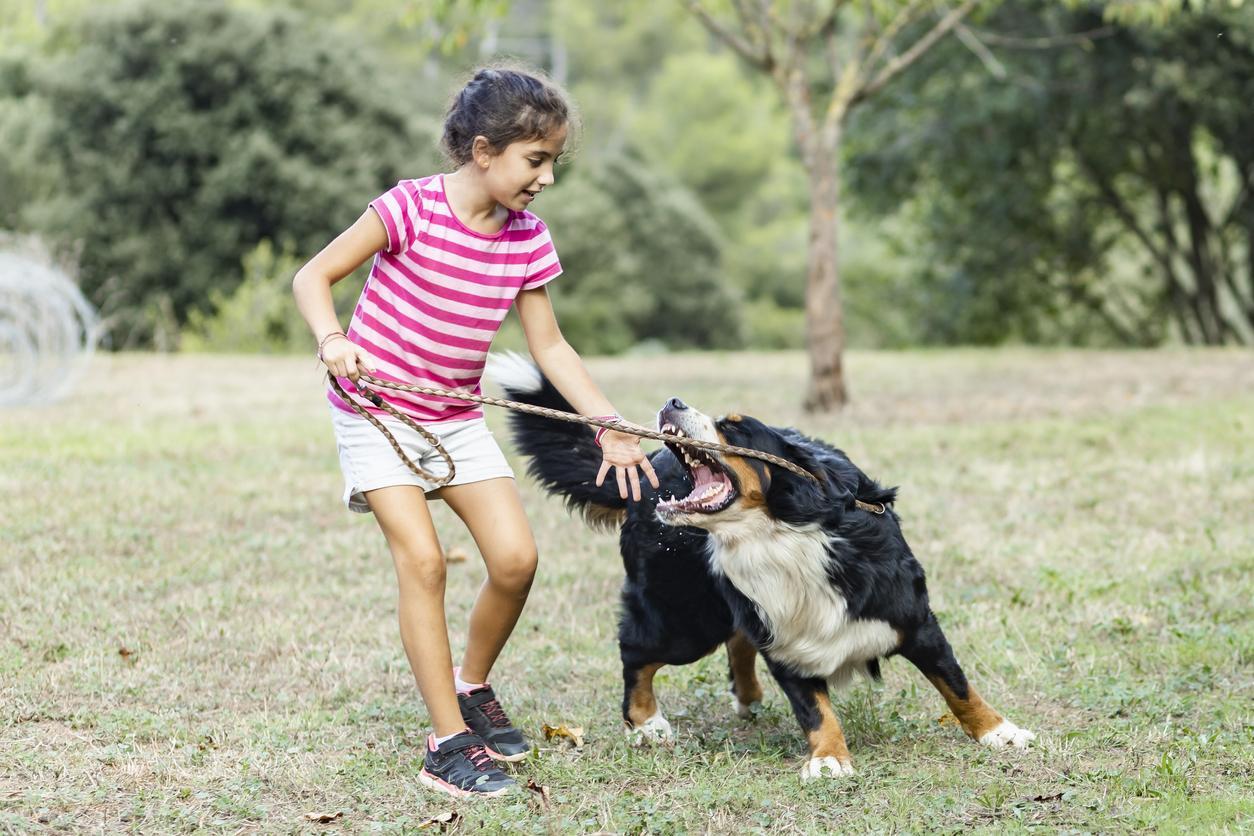 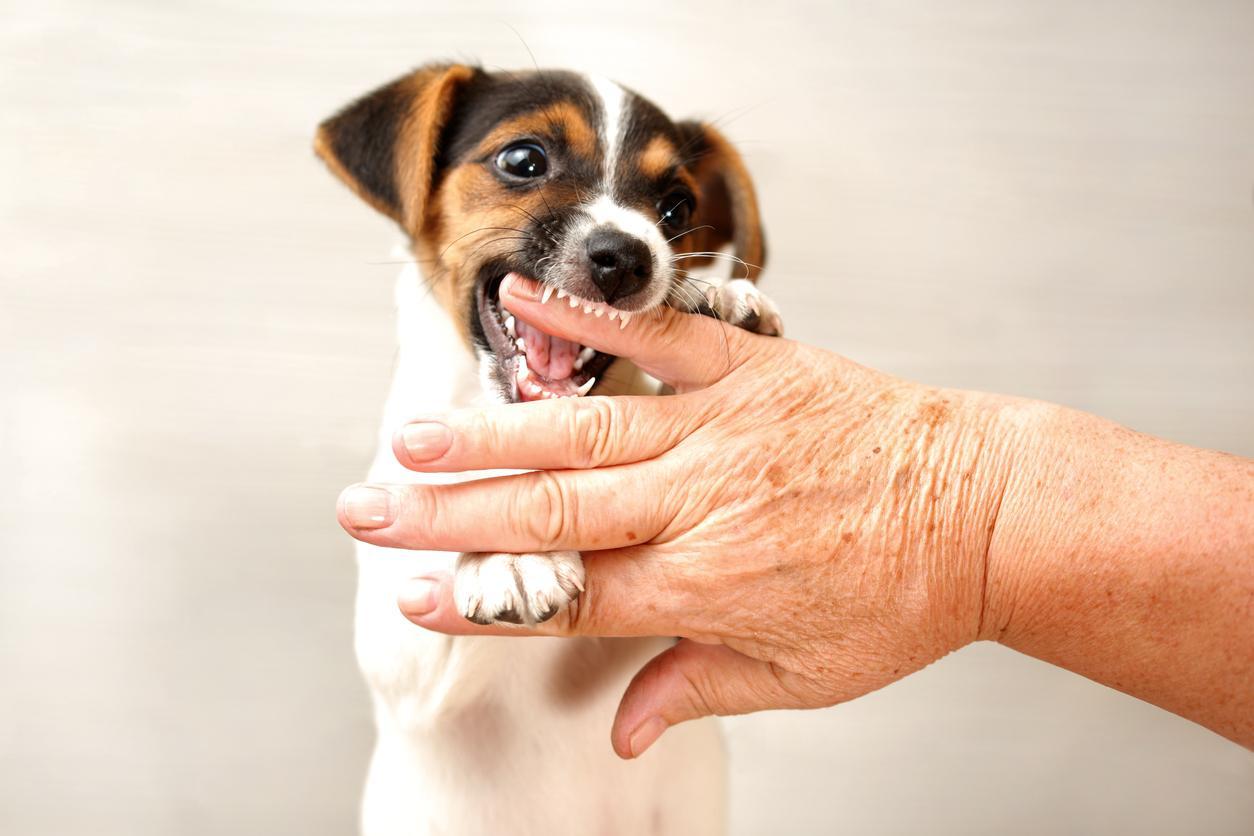 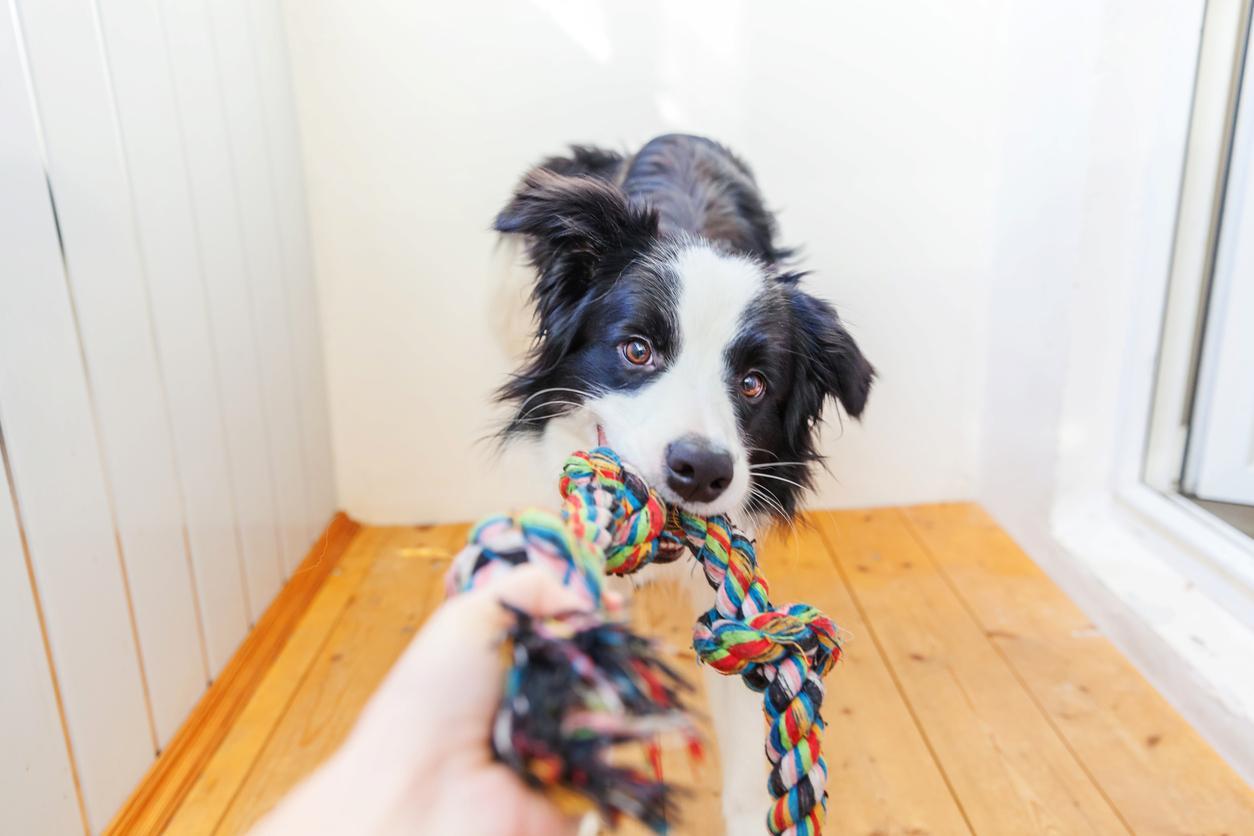