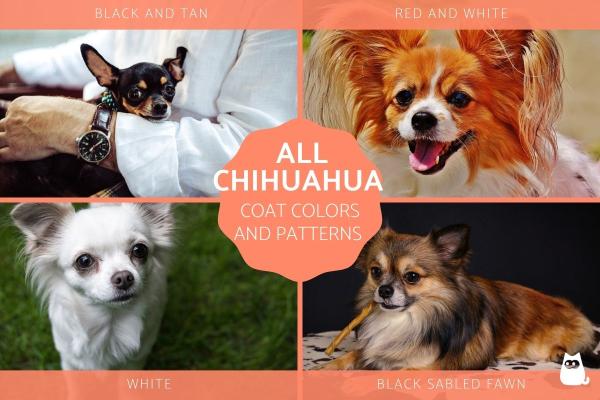 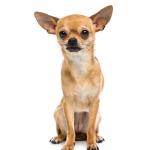 The Chihuahua is a very well-known dog, in a large part due to their small size. Although their stature is small, their character is massive and there is a lot of physical diversity within the recognized breed. Some have long hair, others short, and there are even terms for the different head shapes of Chihuahuas. Another aspect of the Chihuahua which varies significantly is the range of coat colors and patterns. At AnimalWised, we bring you a list of all the Chihuahua colors, patterns and combinations, revealing more than thirty possibilities. We also provide photos of the most common Chihuahua coat colors to see what they look like.

You may also be interested in: All Border Collie Colors, Patterns & Combinations
Contents

Chihuahua colors accepted by the FCI

The World Canine Organization (FCI) is a federation of kennel clubs which organizes officially recognized dog breeds and sets the standards for their characteristics. This includes the Chihuahua which is included in the ‘Companion/Toy Dog’ category. This institution recognizes both long and short hair types of Chihuahua. As far as coat color and pattern is considered, the FCI recognizes all possible coat colors and tones, with one exception. Tis exception is a dog coat pattern known as merle.

Why is the merle coat pattern not accepted in Chihuahuas?

The explanation of why the Chihuahua is not allowed to have a merle coat pattern according to breed standard organizations is not to do with aesthetics. In fact, the merle coat pattern is one of the most beautiful looking patterns we can find in canines. It is a striking mottled pattern with colors which seem to run into each other. The merle gene can often affect eye color, also. This coat pattern is due to a recessive gene. Unfortunately, it is a gene which is linked to various health problems.

When two Chihuahuas with the merle gene are bred with each other, it can lead to the manifestation of serious diseases. These problems are usually related to the eyes and ears, with many puppies being born deaf or blind. Due to these illnesses and other health problems, breeding of Chihuahuas (and any other dog) should be left in the hands of professional and responsible breeders.

Chihuahua colors accepted by the AKC

The American Kennel Club (AKC) is a registry of purebred dog breeds in the United States of America. Their breed standard also adds that the Chihuahua coat can be solid (i.e. of a single color) or patterned. Additionally, they include a specific list of coat colors, patterns and combinations for each dog breed. For the Chihuahua, we can see there are some colors which are considered standard and other color combinations described as alternative. In total, there are more than 30 possible color combinations.

The AKC proposes an even broader list of Chihuahua colors that it refers to as alternatives. They are as follows:

Chihuahua coat markings according to the AKC

In addition to the different coat colors of the Chihuahua, the American Kennel Club also provides information on the different patterns which can appear. As with color, these also different between standard and alternative coat patterns.

All the coat markings of the Chihuahua can differ in shape and location on the dog's coat. Taking this information into account, we can see the variety of coat color, patterns and combinations are almost limitless. Some are certainly more common than others, but we can see they are a breed with one of the most diverse appearances.

Are there albino Chihuahuas?

We have stated above that it is possible to have a Chihuahua with a solid white coat, although this coat color is not common. However, we need to point out the difference between a Chihuahua with a white coat or one with albinism. Albinism in dogs is a congenital disorder. When a dog has a white coat, it means their fue is absent color pigment, but it doesn't necessarily mean they have albinism. A white Chihuahua can be as healthy as any other dog. Their nose and nails can be black or may have a lighter shade such as beige or pink.

Albinism does not only mean the dog will have white hair. Their eyes will likely be lighter in color and their skin looks a little pink or beige, including their nose color. These dogs can suffer from various health problems related to their condition. However, albinism is not the only health condition linked to hair color. Chihuahuas with a solid blue coat are associated with problems related to hair loss in dogs.

If you think your dog may be affected by albinism, take a look at our article on how to tell if your dog is an albino.

Chocolate is another common color of the Chihuahua. It is a shade of brown which some can confuse with other colors such as fawn or tan. To tell the difference, it is helpful to look at the color of the Chihuahua's nose. The dog's nose will also be influenced by their coat since hair color is designated by pigment found in the dog's skin. For most Chihuahuas their nose will be black in color. However, all chocolate color Chihuahuas will also have a brown nose.

Some Chihuahuas are known to shake and tremble, but some more than others. To know more check out our article on why is my Chihuahua shaking?

If you want to read similar articles to All Chihuahua Colors, Patterns & Combinations, we recommend you visit our Comparisons category. 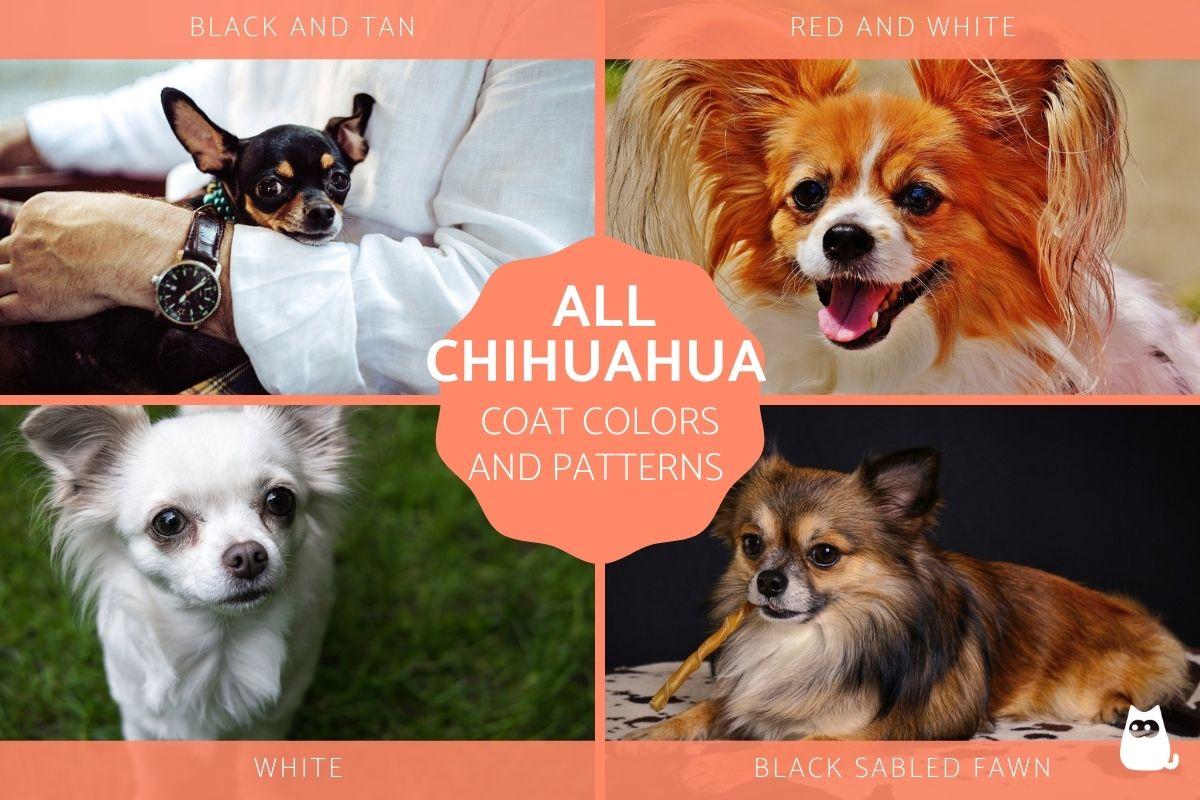 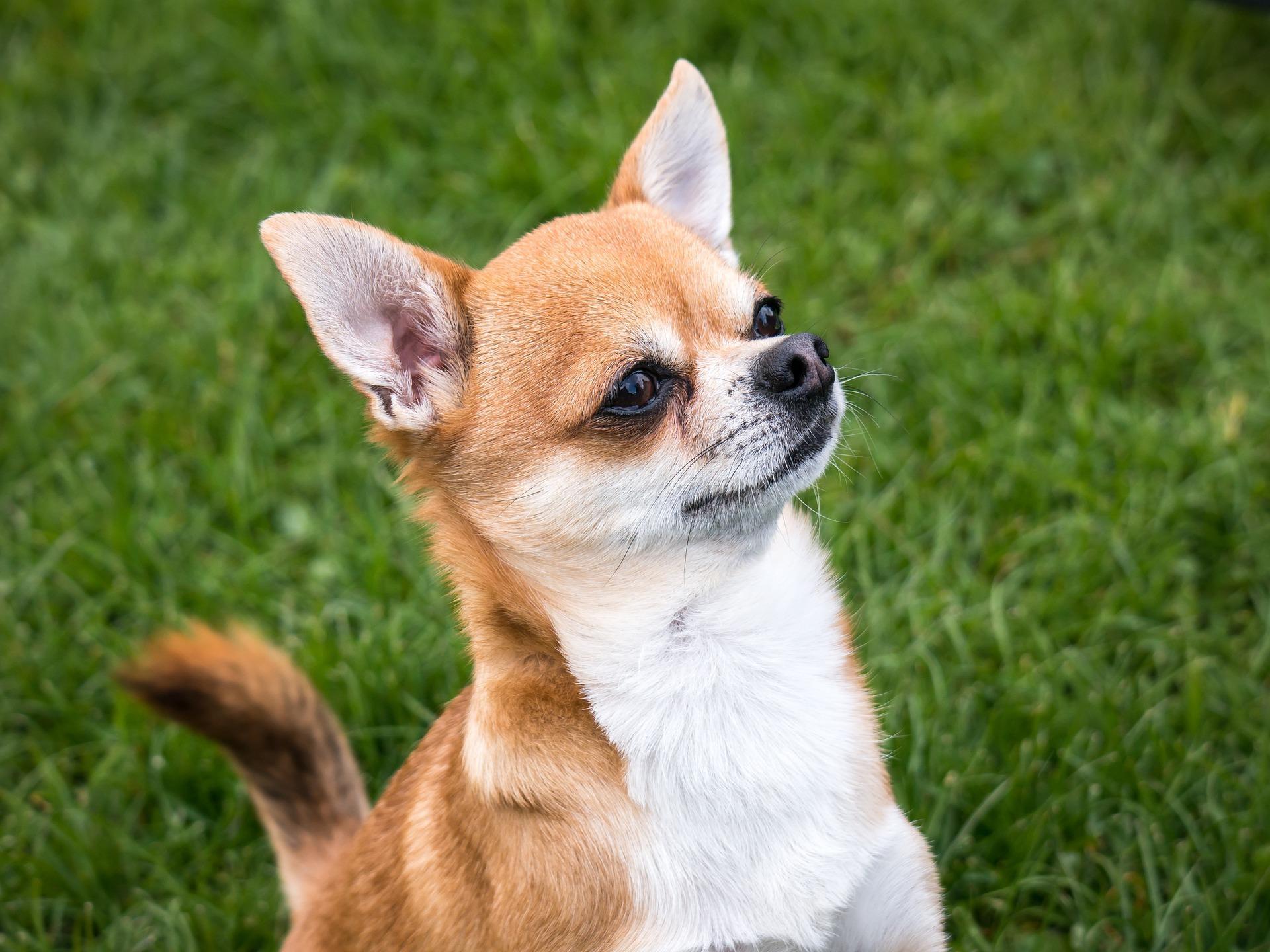 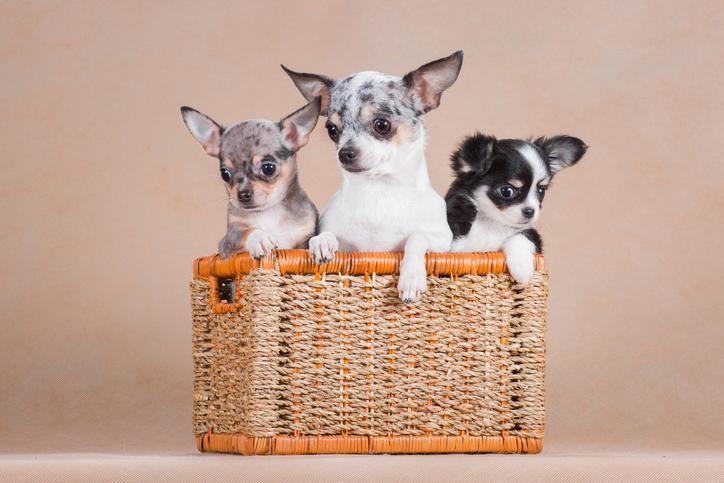 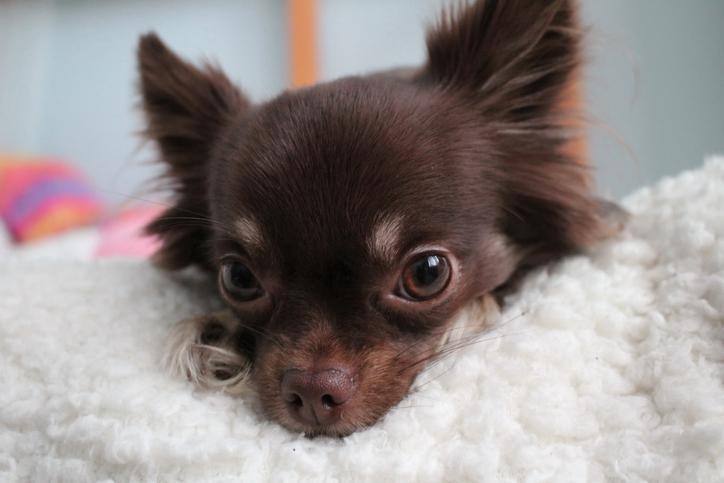 1 of 4
All Chihuahua Colors, Patterns & Combinations
Back to top