Can I Keep a Pet Meerkat?

By Josie F. Turner, Journalist specialized in Animal Welfare. May 7, 2020

Meerkats are undoubtedly cute. Familiar to us from nature documentaries and insurance adverts alike, they have become increasingly popular in the public eye. Such interest has even bred a desire to keep these animals as a pet. Since they are about the size of a small dog and seem to share certain characteristics of other companion animals, it is understandable some people might ask can I have a meerkat as a pet? As soon we consider both the meerkat's suitability as a pet and how it might affect the exotic animal's well-being.

AnimalWised explains why keeping meerkats as pets is both a bad idea and, in most cases, not practically feasible. We also discuss the legality of keeping exotic animals like these as pets.

You may also be interested in: Keeping a Hedgehog as a Pet
Contents

Meerkats, also known as suricates, are very social animals and there are instances where they have made bonds with humans. As we stated in the introduction, they are also very cute and their appeal as a pet is obvious. However, only in the rarest circumstances should they be kept in a domestic environment.

The reasons meerkats should not be kept as pets are due the following issues:

We explain in detail these issues regarding pet meerkats. If you would like to know more about keeping exotic animals as pets, you can look at this article on the otter as a pet.

If you have seen videos of meerkats in the wild, you will often see them in large groups standing in a desert area and looking out for food. Due to the harshness of the arid areas in which they live where predators can pick them up out in the open, they need to stay together for survival.

Due to this need for a tight-knit social group, meerkats have become incredibly social. Not only do they help to search out for food and safeguard other members of the group, they enjoy themselves. They like to play with each other, chase each other around and will even groom each other to relax.

This playful and affectionate nature if part of the appeal of meerkats as pets. It is also an important reason why they shouldn't be kept in the home. While it is possible for a meerkat to bond with a human family, removing them from the large social group is essentially cruel. Meerkats have not been domesticated like dogs, cats and other companion animals. Removing them from their social group means they have a lesser quality of life. Even keeping two meerkats together is not as beneficial as letting them live in their wild groupings.

To accommodate large meerkat social groups, they adapt their natural habitat. While they can spend a lot of time above ground, they do so usually in stony areas where they can hide from potential predators. However, they are burrowing animals and create often complex burrow systems to ensure they stay warm and protected when they need to be.

Keeping a meerkat as a pet in a domestic environment is very difficult in terms of their habitat. keeping them exclusively indoors means they don't have anywhere to burrow. They will likely try to find places in the home to hide which can be disruptive to the home environment.

Meerkats in the wild will create their burrows over miles of terrain and expect to have this area to explore. Bringing them to a small domestic setting completely removes this freedom for no reason other than our own wish to exploit nature (this does not include rehabbers trying to get meerkats back in the wild or caring for them because they cannot live in the wild). Anyone with an apartment should be immediately vetoed as a guardian for meerkats. Those with gardens are still not likely to have sufficient space.

If you do have a large garden, you can also expect for it to no longer be yours. The meerkats will take it over and destroy anything they wish. Lawns are particularly affected since the meerkat will burrow.

Meerkats are very active animals. They will survey a large area in the wild and will try to enact similar exploratory behavior in the domestic environment. While they are diurnal (i.e. they are active during the day), they are very vocal animals. Their vocalizations range in loudness and pitch, with about 12 different types believed to be used regularly for various expressions.

The meerkat also has a very pungent aroma which is not ideal for the domestic situation, especially the houseproud. They also scent mark their territory, so they will intentionally leave their smell on your belongings.

Although relatively tame, the meerkat will not make a very obedient companion animal. They can bond with humans, but do not follow orders easily and can be fairly mischievous. This often brings entertainment in the short-term, but can be problematic over time. Similar situations often happen with those who keep raccoons as pets.

Domestic pets have very specific needs when it comes to diet. It is the reason we do not feed dogs cat food and vice versa. It is possible to provide a meerkat with enough nutrients to survive by providing different types of commercial animal feed. In zoos, they eat cat food in kibble form with a mixture of vegetables and fruit[1]. However, they will also need specific supplements which need to be catered to the individual. This is so they can get nutrients such as calcium which cannot always be provided in sufficient amounts from food alone.

In the wild, meerkats are mainly insectivorous. They also eat lizards and some other small animals. It is possible to purchase insects from exotic animal stores, but it can be costly. This is the reason they are mainly fed alternatives such as cat kibble.

Since meerkats should be kept in a group, this can mean their feeding costs per year might be relatively high. It is possible it would be prohibitively expensive unless you had the capital. Along with providing the right environment, equipment, accessories and anything else they may require, cost of care is significant.

Another wild animal people keep want to keep as pets is the coati. Find out more by reading our article on keeping coatis as pets.

If you try to bring a meerkat into a domestic environment, it will be very difficult to find a veterinary medical professional who can provide the care they require. Even exotic pet veterinarians may not have the specific understanding a meerkat needs.

By taking them out of their natural environment, we also may be exposing meerkats to various diseases. Meerkats can be infected with disease associated with canines such as rabies and canine distemper virus[2]. However, vaccines for these animals are not commonly used.

Interaction with other animals

Since meerkats are territorial, they can fight for dominance. Strangely, despite their cuteness, meerkats are one of the most murderous animals in the world. One study showed that 20% of all meerkat deaths recorded were at the hands of another meerkat[3]. There is little research into how this affects living with other pets, but there is anecdotal evidence to prove that it raises difficulty.

The meerkat is a type of mongoose which is known for its wiley nature and can attack other small animals, although not usually as a predator. They are one of the few animals which have an inhibitor in their body against snake venom, a reason why mongooses are known as good at getting rid of reptiles.

If you have other pets in the home, it is possible the meerkat will be able to bond well with them if properly socialized. However, this process will be a difficult one and there is no guarantee a meerkat will get along with your pets.

Similar to how a meerkat will get on with other animals, keeping a meerkat as a pet requires very important socialization. Meerkats as pets are perhaps most commonly kept in South Africa where they are used as pest control for snakes and other reptiles. They are not necessarily kept as companion animals.

If there are young children in a household, the meerkat's antic nature and habits can be dangerous. Never leave a meerkat with a young child unsupervised, especially if you do not know their personality and you don't know their socialization status.

Exotic animal trade - is it legal to keep meerkats as pets?

Keeping a meerkat as a pet is a practice which does happen. People ignore their needs, especially if they are purchased when young. A young meerkat is so cute and many people forgive their rambunctiousness. However, as they age, they will still be very active and can cause serious problems in a household without the resources to care for them.

Another significant problem is the fact that keeping meerkats as pets is something which encourages an often irresponsible industry. As we have explained in this article on pet meerkats, their requirements are very specific. They need to have lots of space, yet so many are kept in small cages in pet shops and other exotic pet sources.

Although meerkats are not in threat of extinction in the wild, taking them from their environment is still completely unnecessary in most circumstances. A meerkat will have a full and rich life in the wild, something which will never be bettered in the domestic environment. The only exceptions are when there is a significant risk to an individual's ability to survive, but this is something which qualified wildlife rehabilitators need to address.

Whether or not keeping a meerkat as a pet is legal will depend on where you live. Keeping a pet meerkat is illegal in the United States of America. They are highly regulated and you will need a special permit to have them in your care (i.e. if you are a sanctuary). In the United Kingdom, the meerkat is not illegal. Thanks to a popular advertising campaign, the popularity of meerkats as pets skyrocketed. So too did the number of calls to the RSPCA about meerkat animal cruelty.

Even in countries where it is not illegal to keep a meerkat as a pet, their needs will have to be met otherwise animal services may consider the situation to be animal cruelty. This is a gray area and is not always something the authorities have the resources to tackle. People who buy exotic pets in ignorance often can't meet the responsibility and may end up abandoning them. This could even have a knock on effect on the ecosystem of where they are released.

While it it may not be illegal to have a meerkat as a pet where you are, it is not a practice which should be encouraged. These wild animals should stay that way whenever possible. 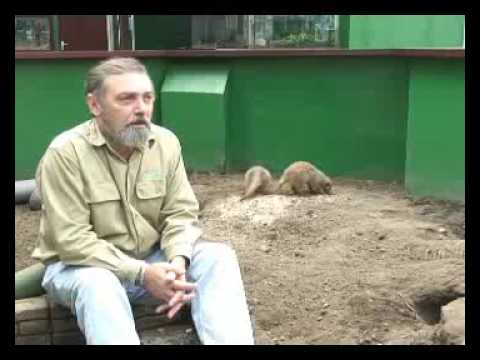 If you want to read similar articles to Can I Keep a Pet Meerkat?, we recommend you visit our What you need to know category.

Keeping an Emperor Scorpion as a Pet
Keeping Pigeons as Pets - Full Care Guide
Can You Have a Monkey as a Pet?
What are the Best Birds to Keep as Pets?
Related categories
The most...The least...ComparisonsNamesIdeal for
Most read
1.
Best Names for American Bully Dogs
2.
What is the Difference Between a Donkey, a Mule and an Ass?
3.
Tamil Names for Dogs - With Meanings
4.
100 Popular Bird Names
5.
Can You Have an Otter as a Pet?
6.
The 5 Most Wrinkly Dog Breeds
7.
How long does a Cat Take to Adjust to a New Home?
8.
17 Best Spotted Dog Breeds
Can You Have an Otter as a Pet?
Can You Have an Armadillo as a Pet?
Snakes as Pets
The Capybara as a Pet
Squirrels as Pets - Is It OK to Have a Pet Squirrel?
Macaws as Pets
What are the Benefits of Keeping Birds?
Can a Cat and a Hamster Live Together?

Can I Keep a Pet Meerkat? 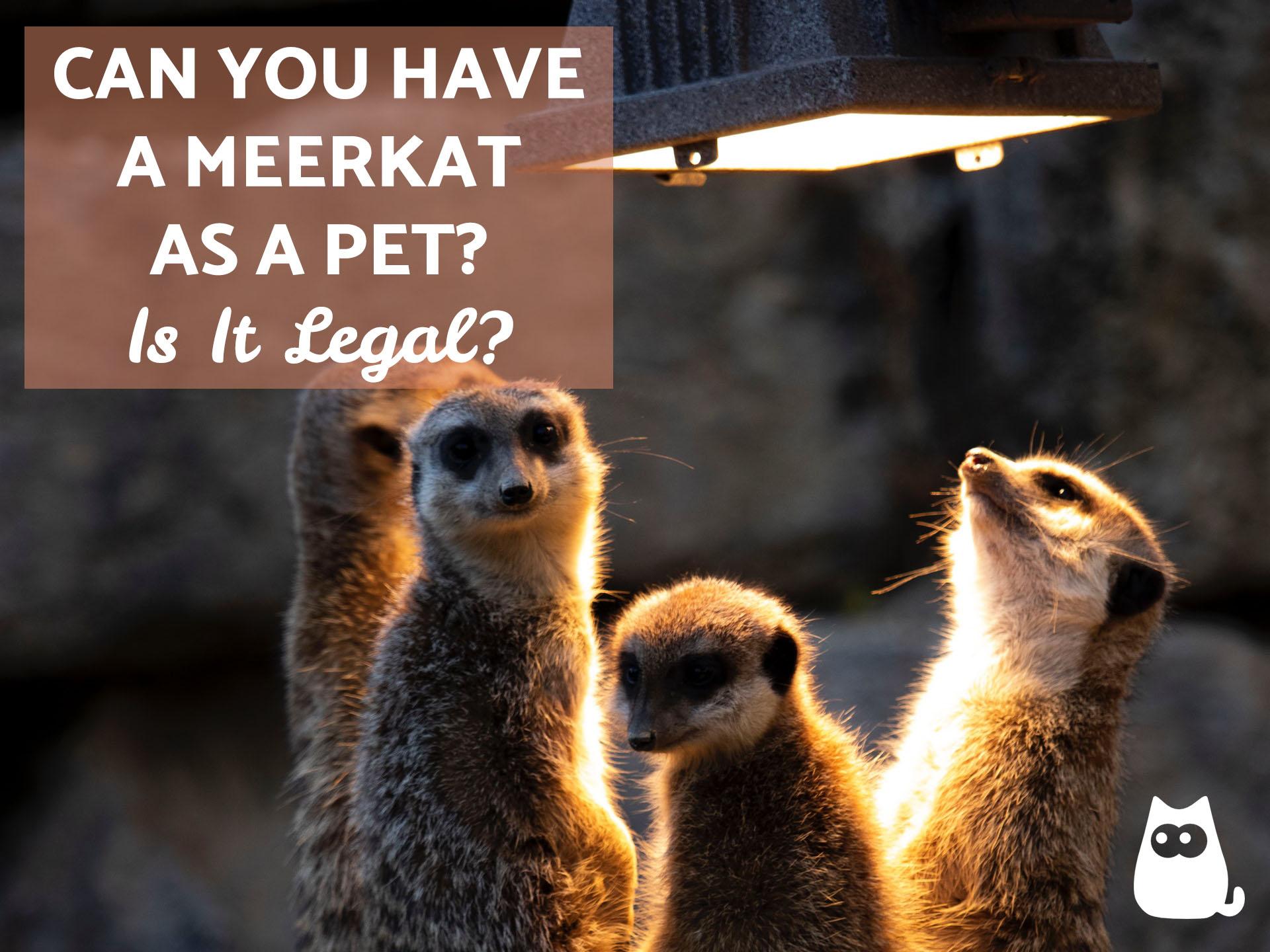 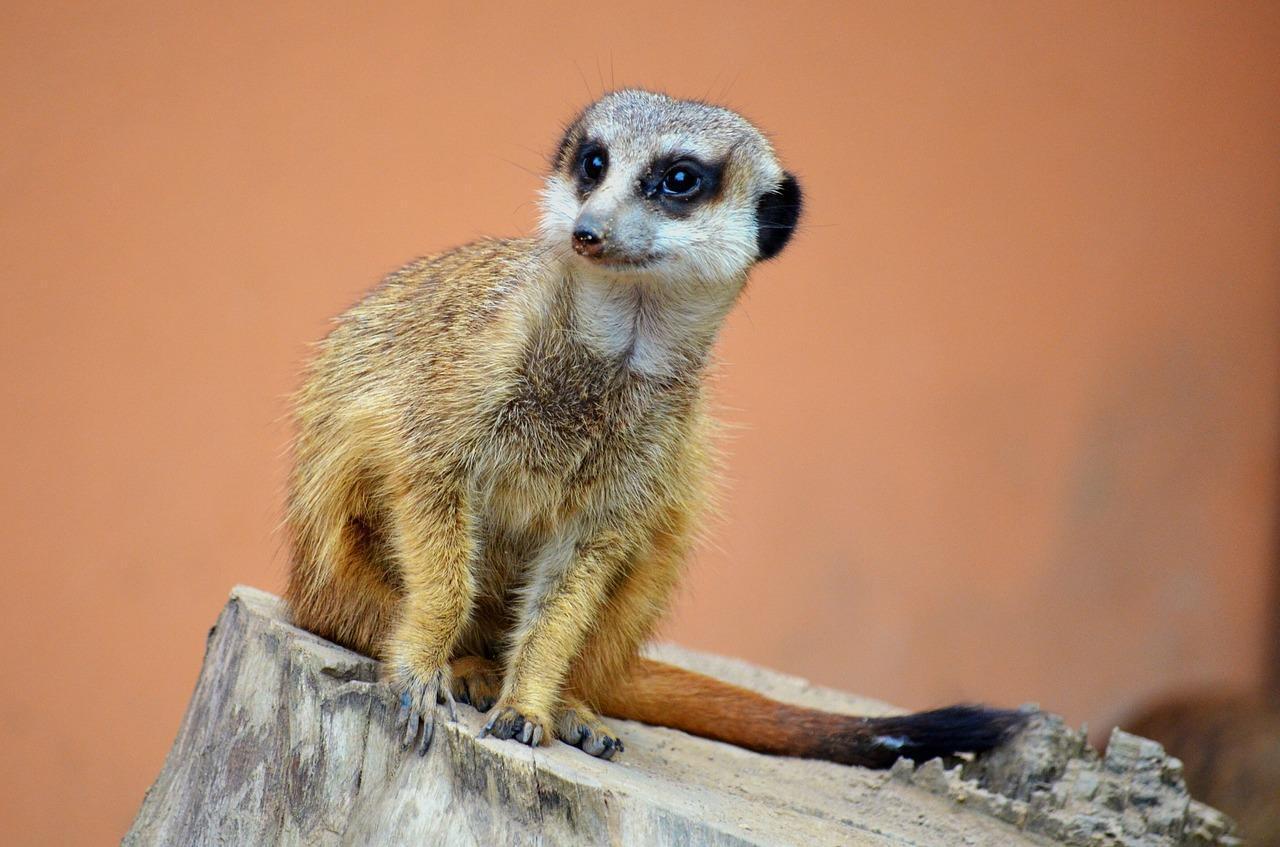 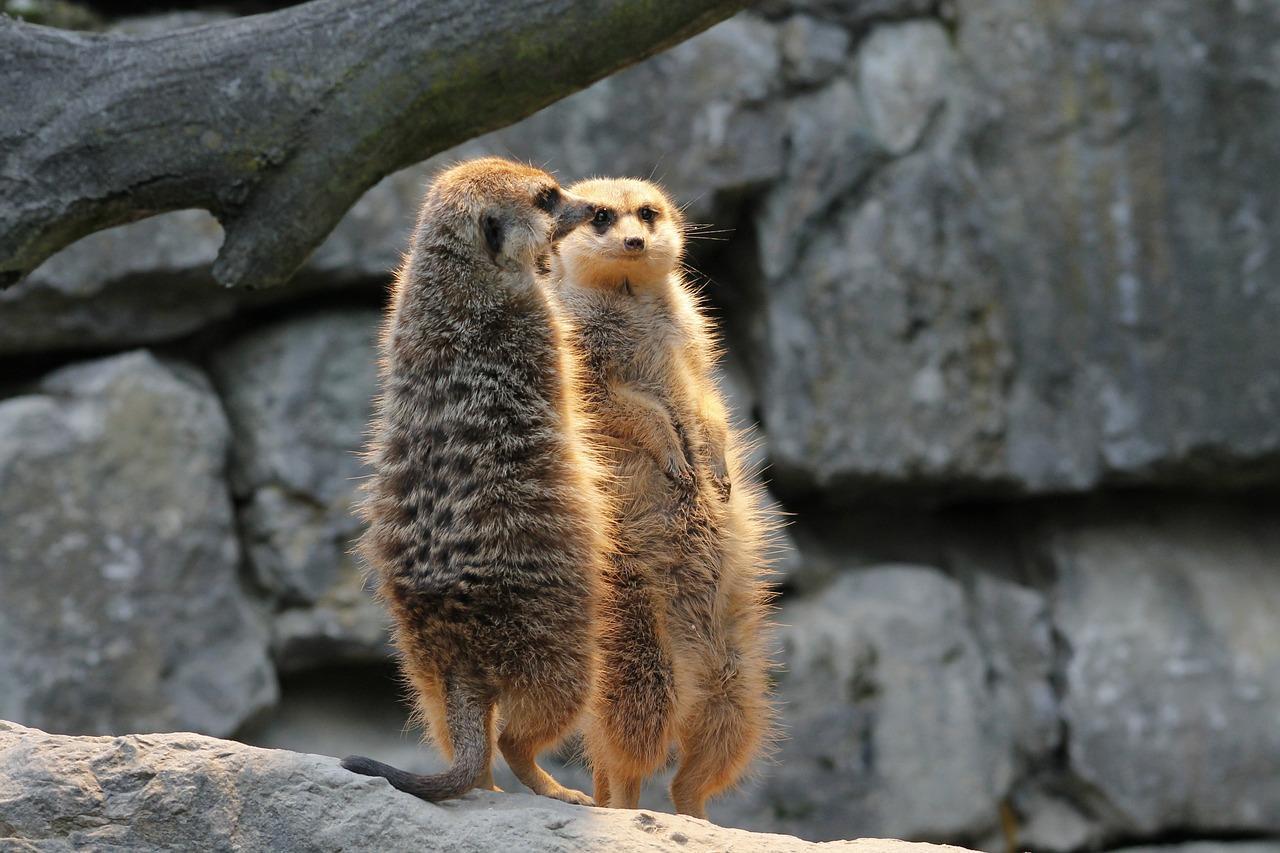 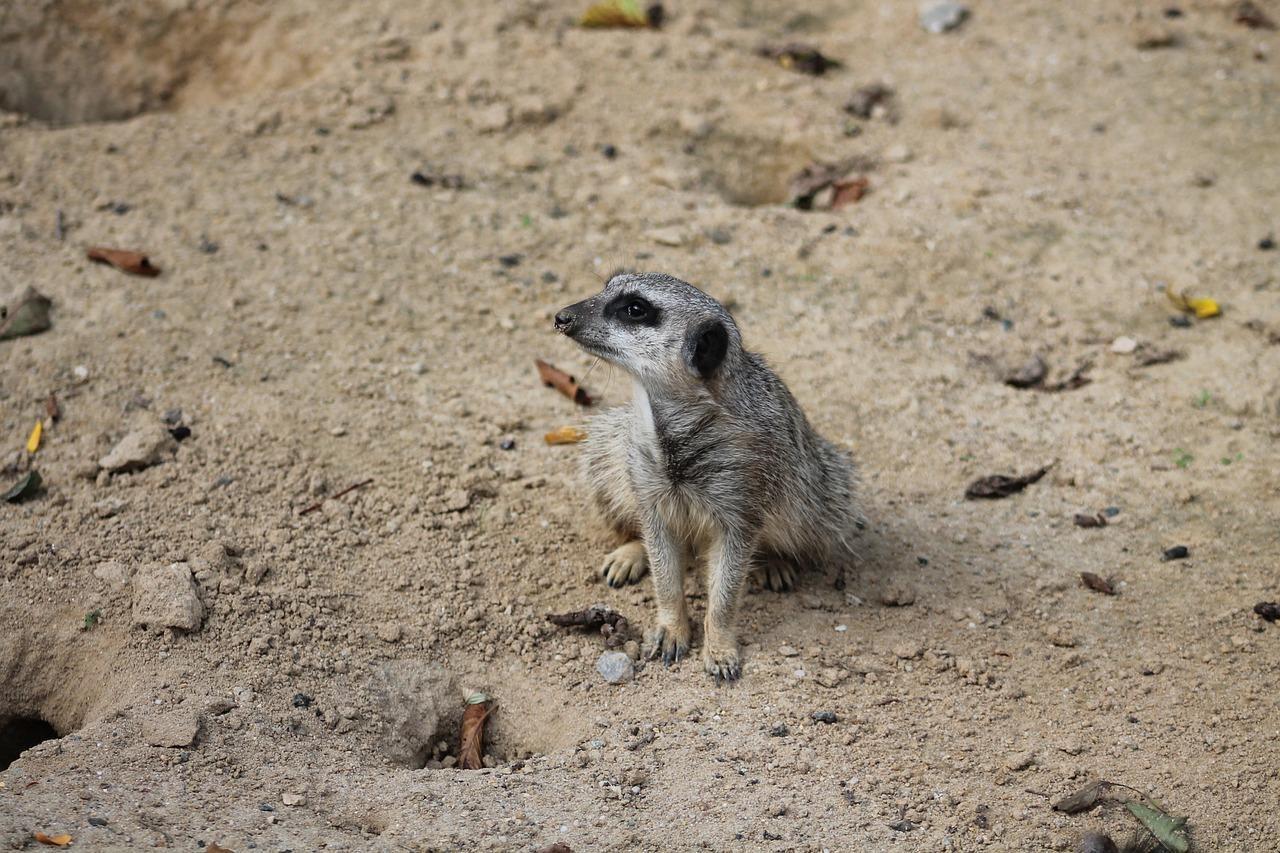