My Cat Got Stung by a Bee 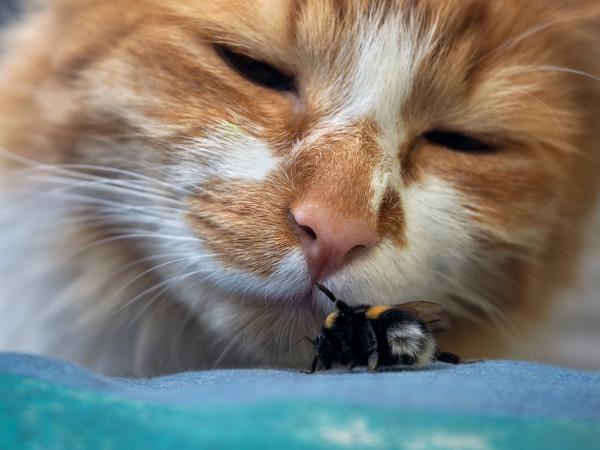 When we combine a cat's natural curiosity with an innate hunting instinct, they can get themselves into trouble. With the limited fauna of our homes and gardens, even the smallest insect can be a cat's white whale. Bees and wasps are large prey when compared with other insect species we might find near the house. Unfortunately, they are also able to cause harm unlike most other instincts: they have a sting in their tail. In the vast majority of cases, this will be no worse than acute pain which will pass soon. In some cases, it can be life threatening.

At AnimalWised, we explain what happens when my cat got stung by a bee. We reveal what treatment we will need to administer and also how we can prevent it happening again in the future.

You may also be interested in: My Cat Was Stung by a Scorpion
Contents

Are bees deadly to cats?

Insects are more present during the warmer months of the year. Bees and wasps are no exception. They are known as being prolific pollinators, so they are particularly drawn to flowerbeds or any place with flowering plants. While they won't go out of their way to threaten our cat, they pose a risk due to their ability to sting. This risk is increased by the fact our cat may try to ingest one of these insects.

We may not be able to see if a cat is stung by bee when it happens. Since we don't monitor their every move, it might not be until we see the cat show signs of pain that we know what happened. We can confirm the injury if we see the stinger still in their skin as it breaks off a bee when they sting an animal. The same does not happen with wasps as their stinger remains attached to their bodies.

The sting in itself will cause pain, but it won't be deadly to a cat. There are, however, two exceptions. Firstly, if the cat is allergic to bee stings, the reactions can be severe and send them into anaphylactic shock. Secondly, if the cat ingests the bee, they can sting them internally. This can cause localized swelling which may cause little problem on their exterior skin, but can close airways if it affects the respiratory tract.

Bee venom is called apitoxin and is secreted in greater quantities by females from glands near the base of the stinger. They use it when threatened. Once the bee releases this poison on its victim, the bee dies. Wasps have a similar sing which combines formic acid with a neurotoxin. However, they do not die when they sting and can sting a cat multiple times.

Bees and wasps aren't the only insects bees try to eat. Take a look at our article on can a cat get worms eating flies? to learn more.

Symptoms of a bee sting in cats

If you have seen your cat has been stung by a bee, you will need to observe for any allergy symptoms. In particular, we need to look for severe allergic reactions. When they are stung on their skin, it will usually only leave some localized inflammation and redness. However, if the cat develops a severe reaction, we can see the following symptoms:

Since the cat sees the bee as prey, it is likely they will try to eat it or at least toy with it. If your cat got stung by a bee in the mouth, this can inflame the area. For this reason, you may see the cat with a swollen cheek, tongue or general facial area. The more severe the reaction, the more swelling will appear around the cat's mouth.

What to do if my cat has been stung by a bee?

When you see your cat got stung by a bee, the first thing you will need to do is observe them closely. This can be the difference between live and death in some cases. Here are the steps you need to follow:

This is first aid for cats which have been stung by a bee, but do not have an allergic reaction. In the latter case, it is important we go immediately to a veterinary clinic. Since the bee venom can close off parts of the respiratory system, there is the possibility of asphyxiation which can be fatal. Since this is an emergency situation, it requires emergency treatment, often in the form of antihistamines.

Despite the presence of inflammation, you should not medicate your cat on your own with anti-inflammatory drugs such as ibuprofen, paracetamol or any NSAIDs used in human medicine. They are toxic to cats and would only worsen the picture. Likewise, essential oils should not be used, given their toxicity in cats.

What to do if my cat eats a bee?

If a cat ingests a bee, two things can happen: its mouth and throat can become inflamed by the sting, which preventing the correct passage of air to the lower respiratory system, or an anaphylactic shock occurs.

This last case would be more serious and would make breathing more difficult by acting on the respiratory system and producing facial edema, an exaggerated inflammation of the throat area. These greatly endanger the life of the animal. In both cases, you should go to the veterinary center to start treatment urgently.

Tips to prevent your cat from being stung by a bee

To prevent your cat from being stung by a bee or wasp, you can try to limit their outside time during the warmer months. This is more important if your cat has an allergy to bee stings. In other cases, it may be better for the cat's overall health to let them be outside. However, since bees and wasps can enter the home, we can also use mosquito nests and other barriers to prevent them from entering the home. Insect repellants and diffusers can also be used.

If you want to read similar articles to My Cat Got Stung by a Bee, we recommend you visit our First aid category.

My Cat Got Stung by a Bee 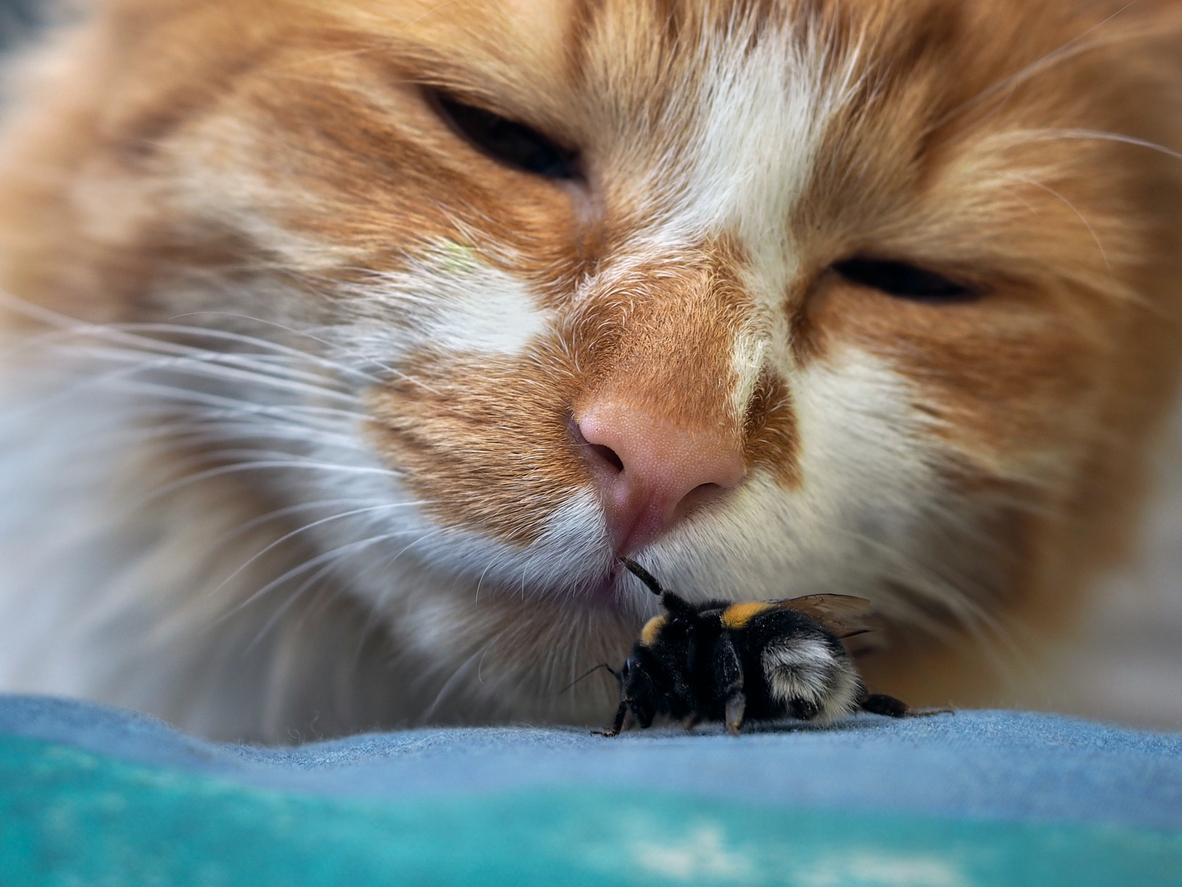 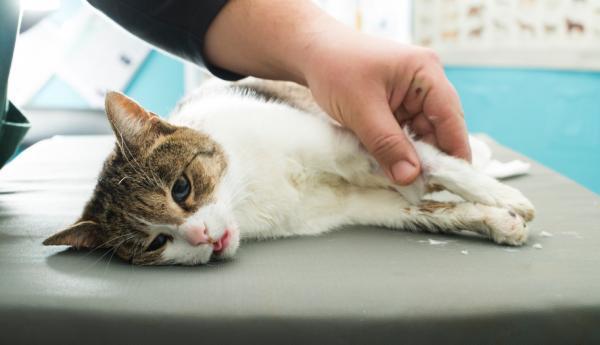 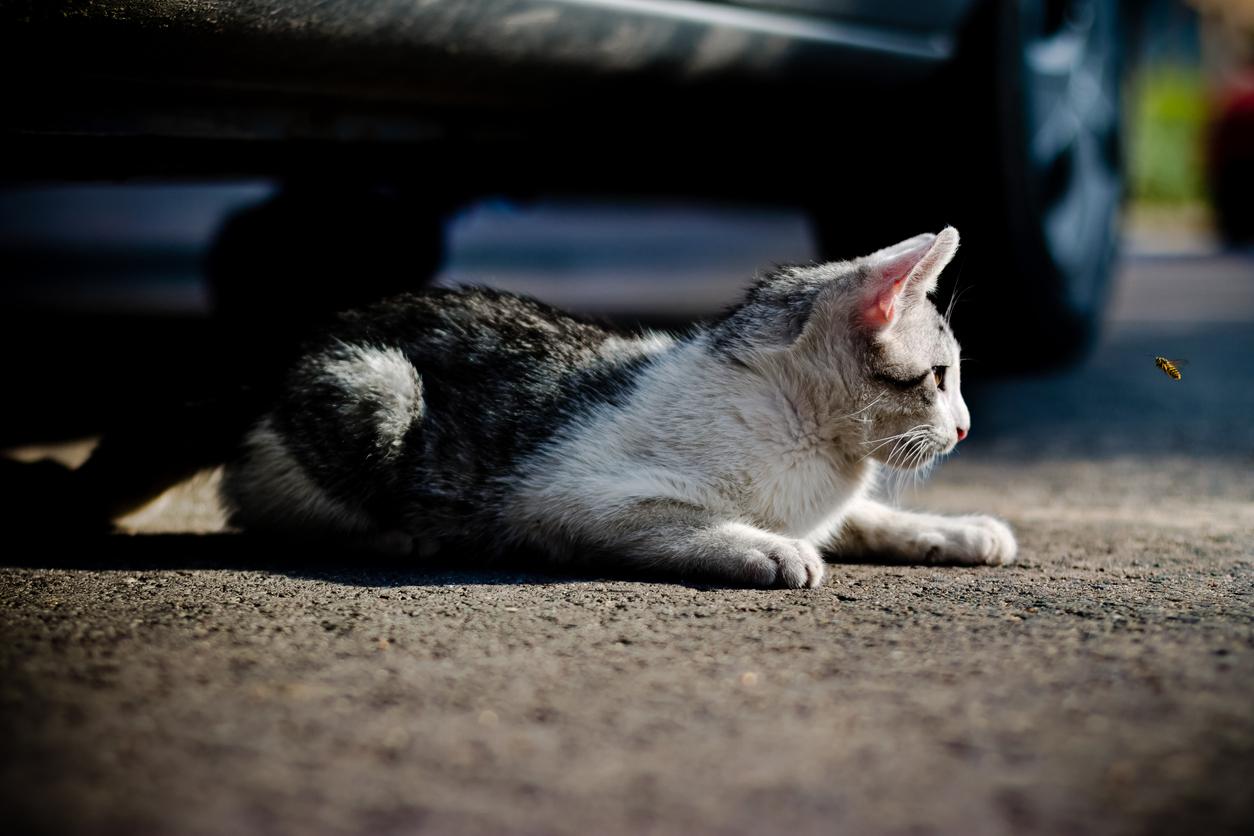