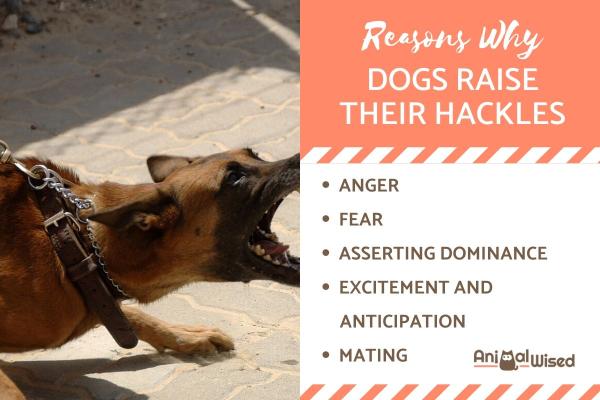 Have you ever noticed the hair on your dog's back stand on end? It might be the hair along their spine stands up, almost like a hedgehog backed into a corner. These hairs are known as hackles and raised hackles are a normal reaction for the dog, similar to how we humans can experience goosebumps. Similarly, the reasons behind such a reaction are also varied and may have implications about the dog's well-being, and not only in the moment in which it happens.

In order for us to better understand why your dog's hair is standing on end, we need to know more about the body language of dogs. Not only do the hairs on a dog's back provide messages to others about their current state, but their ears, tail eyes and many other non-aural signals are used for canine communication. To know why a dog raises their hackles and more, keep reading AnimalWised.

You may also be interested in: Why Is My Dog Shaking For No Reason?
Contents

What causes a dogs hackles to be raised?

The hackles themselves refer to a group of hairs which appear along the neck and spine of certain animals. While we may be most familiar with a dog raising their hackles, many birds can do the same. They have plumage around their neck which can be raised when mating, cawing or even being aggressive.

In a dog, there are certain situations which can cause their hackles to be raised. Dogs raise their hair due to:

While we will go into more details below about the specific reasons a dog raises their hackles, but it is important to know the physical process. The scientific word for a dog's hair standing on end is known as piloerection. This is an involuntary reaction similar to goosebumps in humans. Since some dogs have long or short coats, it is not always possible to see raised hackles in dogs. This is why it is important to look at other signals also.

The hair will stand on end due to a signal sent from the brain. This is controlled by various hormones and chemicals released in the body, but adrenaline is one of the most common. While we often associate raised hackles with a problem, piloerection is a common process which needs to be understood in context. We provide the most common contexts below.

When a dog becomes angry and is preparing to attack, the hair on their back will stand on end. It is a natural response to warn other dogs, other animals and even humans that we need to be careful. However, this display of anger is often one of the last signs to appear. When a dog is angry, they can growl, bear their teeth, wag their tail and even keep their ears forward. The process of becoming aggressive can happen all of a sudden.

While other dogs and animals instinctively recognize the anger of a dog, we humans are often not as observant. This is why we need to be careful when playing or interacting with dogs. What we think might be fun, might be making them angry, with their hackles raised being a sure sign. This is especially so with children roughhousing with dogs.

If you notice your dog's back hairs standing on end and think they are angry, try to divert their attention from the source of discomfort. Distracting them with a ball or similar toy might be helpful. Since dogs are generally happy animals, there is a problem if they are regularly angry. Since these situations can be problematic, it is best you take the dog to a veterinarian and a canine ethologist to work out why they are angry.

While fear and anxiety are two different emotions, they can be related. Often a dog will become aggressive because they are frightened. When they feel insecure or threatened, they will raise their hackles.

Some dogs are generally more fearful than others. They can experience anxiety or stress even in situations which do not actually pose a threat to their security. Again, we will need to look at the body language of the dog, including raised hairs, to see if fear is the reason. We also need to look at the context of the situation as there may be an obvious stressor such as the presence of an aggressive dog.

Fear can cause dogs to be reactive, so they may growl or bear their teeth similar to when they are angry. However, a scared dog will likely keep their tail between their legs and try to hide form whatever is causing them to be scared. Dogs which have been poorly socialized, abused or abandoned by previous owners are generally more likely to be fearful animals.

Before we explain how being dominant can raise the hairs of a dog's body, we want to differentiate this from the dominance training theory. The latter is a theory which claims that dogs are aggressive with humans because they want to be dominant and aren't being allowed. But this theory is not true and unhelpful, often exacerbating aggression problems in dogs.

However, dogs do have a social hierarchy and will have situations where they want to assert themselves. An example may be a mother dog with her puppies. If they are misbehaving, she may raise her hackles as well as provide other signs to get the young dogs to comply.

Dogs will be dominant or submissive depending on the situation and with whom they are interacting. It is usually not a serious situation and they may only raise their hackle momentarily. It is something unneutered male dogs often do when competing for a female in heat.

Not all of the reasons why your dog's hackles will be raised are negative. The dog's brain may also secrete adrenaline when they are excited and happy. For example, when a dog is excited to meet a new animal, their hair may stand on end.

It is important to remember that we need to best interpret what a dog is trying to say. If we see the hair on their neck and back is standing up, we shouldn't assume what the reason is. We need to deduce from their other signals and body language what it is they are trying to say. Other signs of a happy dog include wagging their tail excitedly, barking or jumping around.

Unneutered dogs are generally more prone to various negative behaviors, including aggression, jealousy and hyperactivity. The reason is partly due to an excess of hormones created by the sex organs. When they are neutered, the testicles are removed and this lessens the likelihood of problem behaviors, although it is not the only influence on how a dog acts. Neutered dogs have other advantages, including generally living longer.

Another factor is the fact that male dogs will want to mate with a female. A female in heat may raise her hackles, but the male dog is more likely to do it out of excitement. it can be quite difficult to control a male dog around a female in heat. As we stated above, it is possible the dog will raise their hackles when competing with other males. However, since they are excited to mate and adrenaline is produced, their hackles may simply raise due to being in a state of arousal.

Yawning is another behavior of dogs which has different interpretations, something we explain in this video below:

If you want to read similar articles to My Dog's Hair is Standing on End - Reasons for Raised Hackles in Dogs, we recommend you visit our Facts about the animal kingdom category.

Why Does My Cat Lick My Hair? - Reasons Cats Groom Humans
Why does my Cat Sleep on my Head?
What is 'Sparring' in Dogfighting?
Why Does My Dog Stare At Me? - All Possible Reasons
Related categories
Endangered animals
Most read
1.
What Animal am I According to my Zodiac Sign?
2.
What Does It Mean When a Cat Shows Up at My Door
3.
The 10 Most Solitary Animals in the World
4.
Differences Between Crows, Ravens and Rooks
5.
How Many Types of Lions Are There?
6.
10 Smells that Attract Cats
7.
Animals With Scales - A Full List
8.
10 Most Beautiful Animals in the World
Why Is My Dog Leaning on Me? - Is It OK?
Is it Bad to Sleep with my Dog?
My Cat is Hissing at Me All of a Sudden
Why is My Cat Staring at Me?
How Common is Heterochromia in Dogs?
My Dog's Nose is Changing Color
Is It Normal for My Female Dog to Mount Another Female Dog?
My Cat Doesn't Purr - Reasons for Not Purring 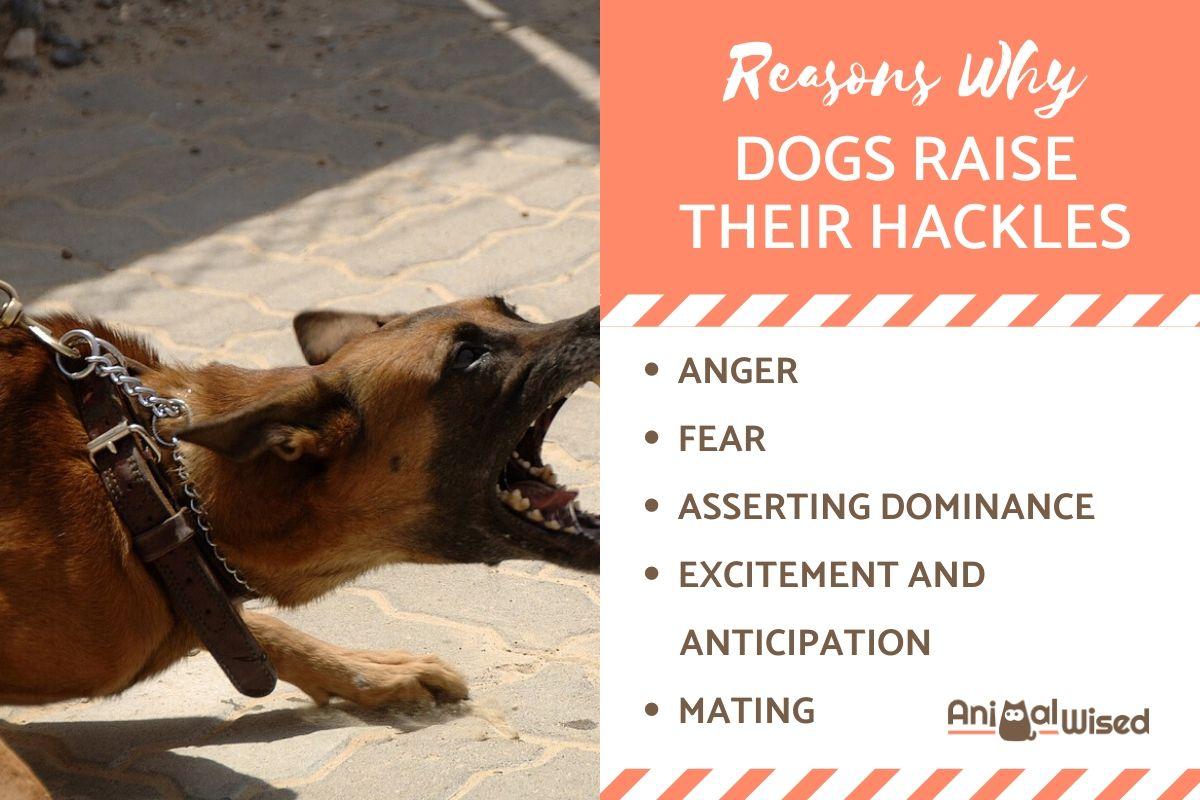 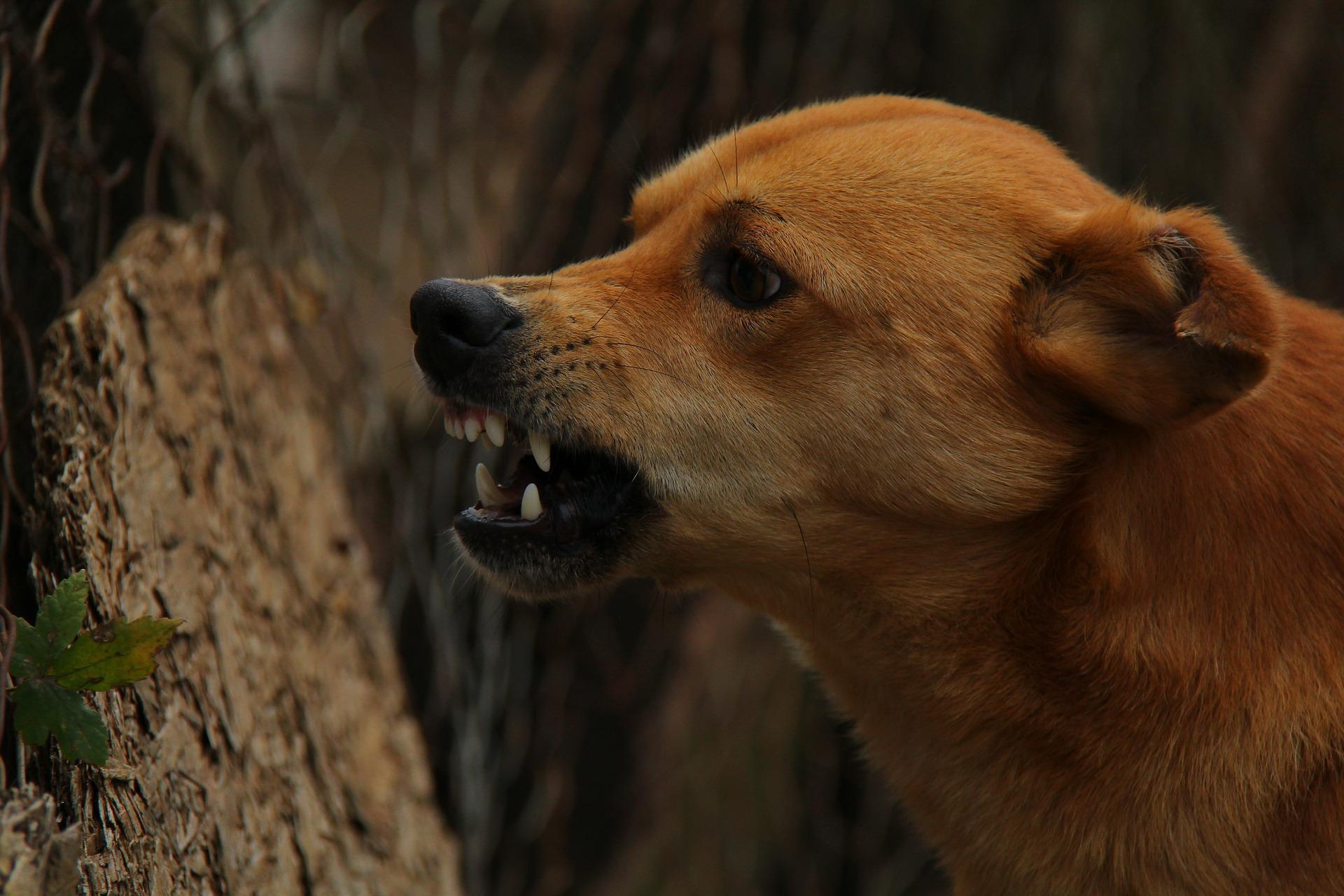 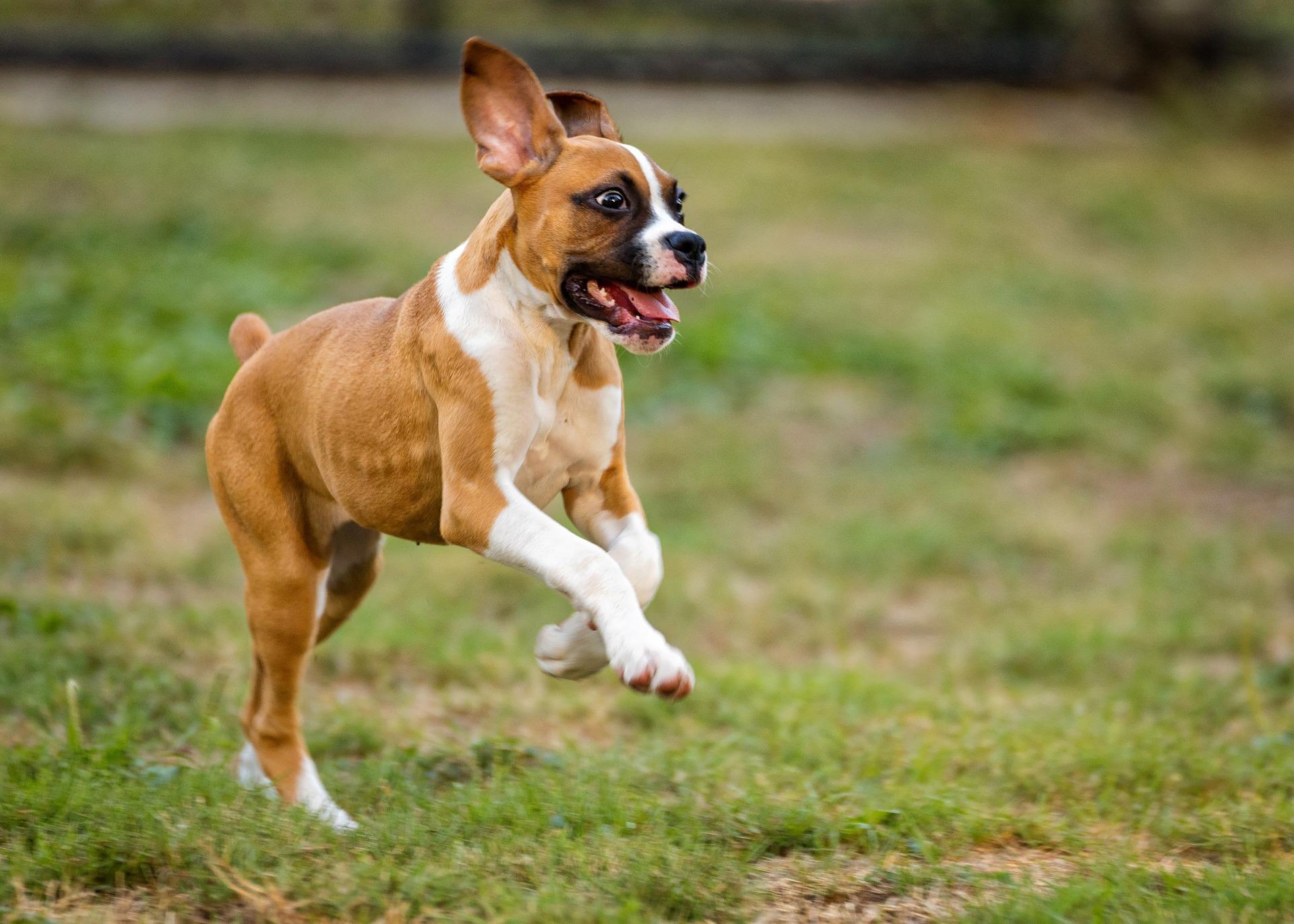