Differences Between Crows, Ravens and Rooks 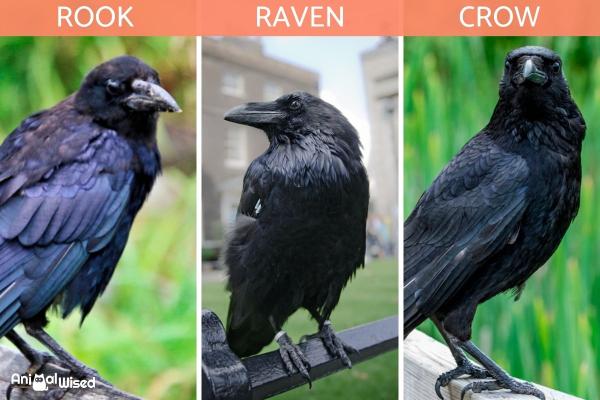 Ever wondered how to tell the difference between a crow, a raven and a rook? These birds are all from the same genus, Corvus. So, it's no wonder they look so alike.

In this AnimalWised we're going to explain the differences between crows, ravens and rooks. This way, you'll be able to tell them apart by sight and know how they differ in other ways too.

You may also be interested in: Why Do Crows and Ravens Caw?
Contents

What do crows, ravens and rooks have in common?

Crows, ravens and rooks all belong to the same genus, Corvus, which explains why they look so similar. The genus Corvus includes about 45 species, which are spread all over the world except for South America, some islands and the Poles. They evolved in Central Asia and spread from there.

In turn, the genus Corvus is classified within the Corvidae family, which includes more than a hundred passerine birds such as choughs, jays and magpies. Corvids are extremely intelligent birds, known for being able to use tools, have excellent memories and recognize themselves in mirrors, which means they have some degree of self-awareness.

Among the similarities between crows, ravens and rooks we can find their medium size and black plumage, which sometimes shows a little gray or white depending on the species. Males and females look quite alike. They can live in cities, as they have omnivorous diets and will find food by scavenging.

Crows, ravens and rooks are sociable animals, and they live in groups. Together, these birds help each other find food, use cawing sounds to communicate and even play just because they feel like it. They live for decades, although the average lifespan is of 20 years in the case of ravens and around 10 in the case of crows.

As you can see, corvids are very diverse. Within the Corvus genus we can find the following raven species:

There is even more diversity of crows. The most common ones include:

The rook, on the other hand, has the scientific name of Corvus frugilegus. You can see a rook in the picture below.

Before we get into details of each bird, let's take a look at the main differences between these birds:

Rooks (Corvus frugilegus) are black birds similar to others in the Corvus genus. However, the differentiate themselves with their pale grey and straight bill. They also have oily and loose plumage, as well as feathery “trousers”.

These birds are often seen in groups known as “rookeries”. You may even see a male court a female by strutting, bowing and cawing. When in flight, these birds have longer wings than crows, a narrow body and a long graduated tail.

Ravens (Corvus corax) are large black birds, larger than crows and rooks. These birds are often seen rural areas. Other than their size, the differentiate themselves from other Corvus birds with their deep gravely call that sounds like a “cronk”. These birds mate for life so they are often seen with their significant other, caressing each other's beaks.

They have thick black plumage and a strong heavy bill. When in flight, ravens have large broad wings, well-fingered wing tips and a diamond-shaped tail.

Crows (Corcus corone) are widespread black birds. They're often seen scavenging for insects or other food. They are different to other corvids due to their tidy black plumage, black bill, square-shaped tail and their call, which is high pitched and usually repeated three times in a row.

Crows do not have feathery “trousers” like rooks and are smaller than ravens, making them easy to differentiate by sight.

Differences in size between crows, ravens and rooks

As we said before, ravens are generally larger than crows. However, that depends on the species and, of course, the age of the bird.

In the picture below you can see a carrion crow in a urban environment.

Differences in calls and sounds between crows, ravens and rooks

Each bird from the Corvus genus has its own distinct call. As we said, these birds are extremely clever and have long memories, so they learn to recognize each other by their call alone. Moreover, they can imitate the sounds of other animals and the environment.

In the picture below you can see an American crow calling.

Differences in habitat between crows, ravens and rooks

One of the most obvious differences between crows, ravens and rooks is their habitat and range; in some cases, you will be able to tell them apart just by where you are. All of these corvids can be found in cities within their geographical range, as parks and gardens are great places to scavenge. However, ravens are rarer in urban areas.

Differences in behavior between crows, ravens and rooks

Crows, ravens and rooks are mostly monogamous, sociable to an extent and raise their chicks in pairs where the two parents feed their offspring and care for them. Let's take a closer look at the differences in behavior:

In the picture you can see a common raven.

Differences in anatomy between crows, ravens and rooks

Another way of telling a crow, a raven and a rook apart is looking at their appearance in detail, both when perching and when flying.

Now that you know what are the differences between crows, ravens and rooks, why not discover all about other kinds of wildlife? Take a look at the following articles:

If you want to read similar articles to Differences Between Crows, Ravens and Rooks, we recommend you visit our Facts about the animal kingdom category.

7 comments
Rating:
Tom Satterly
19/02/2021
Thank you for the article. I have often wondered how rooks fit in.
Over the last decade or so, we have had a morning winter breakfast for ravens in our yard in the Kootenay area of British Columbia. During a particularly heavy snowfall, we noticed two forlorn neighbors perched on a power line looking like they might need a friend. Seems like they enjoyed the meal. This morning, perhaps as many as twenty attended. Some landing as close as two feet from me.
As I read about your impressive team and collaborators, I could not help but wonder if any of you had bred any good rooks lately.
Please forgive me. I just could not help it.
Thanks again. I learned a lot.

What is there to forgive?! We loved reading your comment and wish we could be there to enjoy the beautiful sight you so well described. Rooks are not native to Canada and we would expect breeding there might be limited due to possible ecological clashes. Rooks are generally vast in wild populations and don't have many breeding programs, as far as we are aware. There may be some local wildlife authorities with breeding programs, but we can't easily find them.

If someone in these comments knows more and would like to share, we would appreciate it. Thanks again, Tom!

Rating:
Joseph Chance
01/11/2020
What bird is pictured as 7 of 7. ie the last picture in the article, All other individual pictures say "in the picture below you can see...." but not so for the last picture. By its placement in the article I expect a rook, has trousers. but heavy beard and lack of clearing at base of beak say raven to me. What is correct and why? Thank you.

Thank you for the comment. The last picture is actually a raven. It is placed to give a better idea of what they look like. We do say that the picture os of the common raven in the text, but we are sorry if this wasn't very clear to you.

Rating:
David Mills
06/02/2019
Nice job describing the differences (and similarities) of the three bird groups. Very organized and easy to understand. Thanks.

We appreciate you stopping by to share some kind words. We hope you're well!

Steve Syens
23/11/2018
Great article on the difference between the three birds. We have a lot of American crows in our neighborhood in Wisconsin but I don't believe I have seen any ravens. The crows can be really noisy at times. Especially if there are hawks or other predators in the area. Thank you for the informations

Thanks for the input, we appreciate it. Crows can be particularly bothersome and are well known for their noise. They also don't fear humans as much as other birds and can get a little too close for comfort sometimes. They are also fascinating creatures with a lot of cultural significance, so we're glad you were able to stop by and share.

Kate
13/04/2018
Great information! I would love a section that had recordings of the different calls.
jean lockett
04/03/2018
That is very interesting. 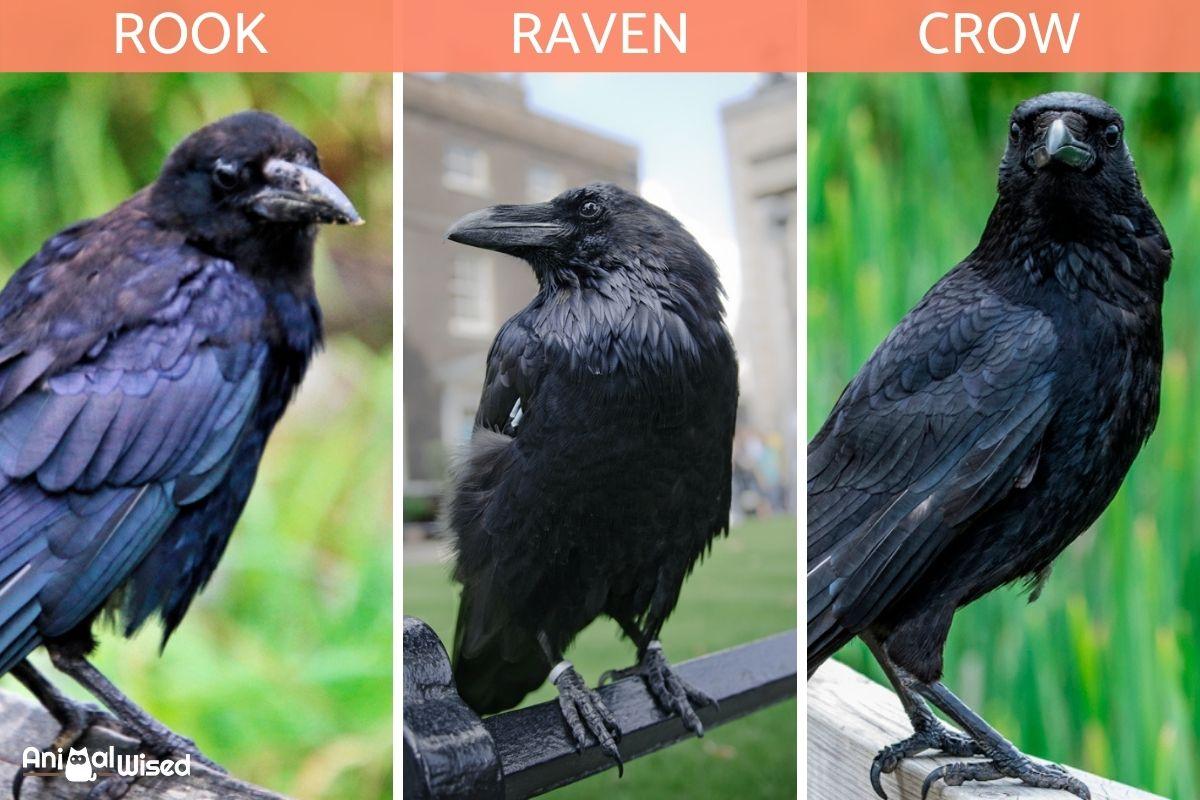 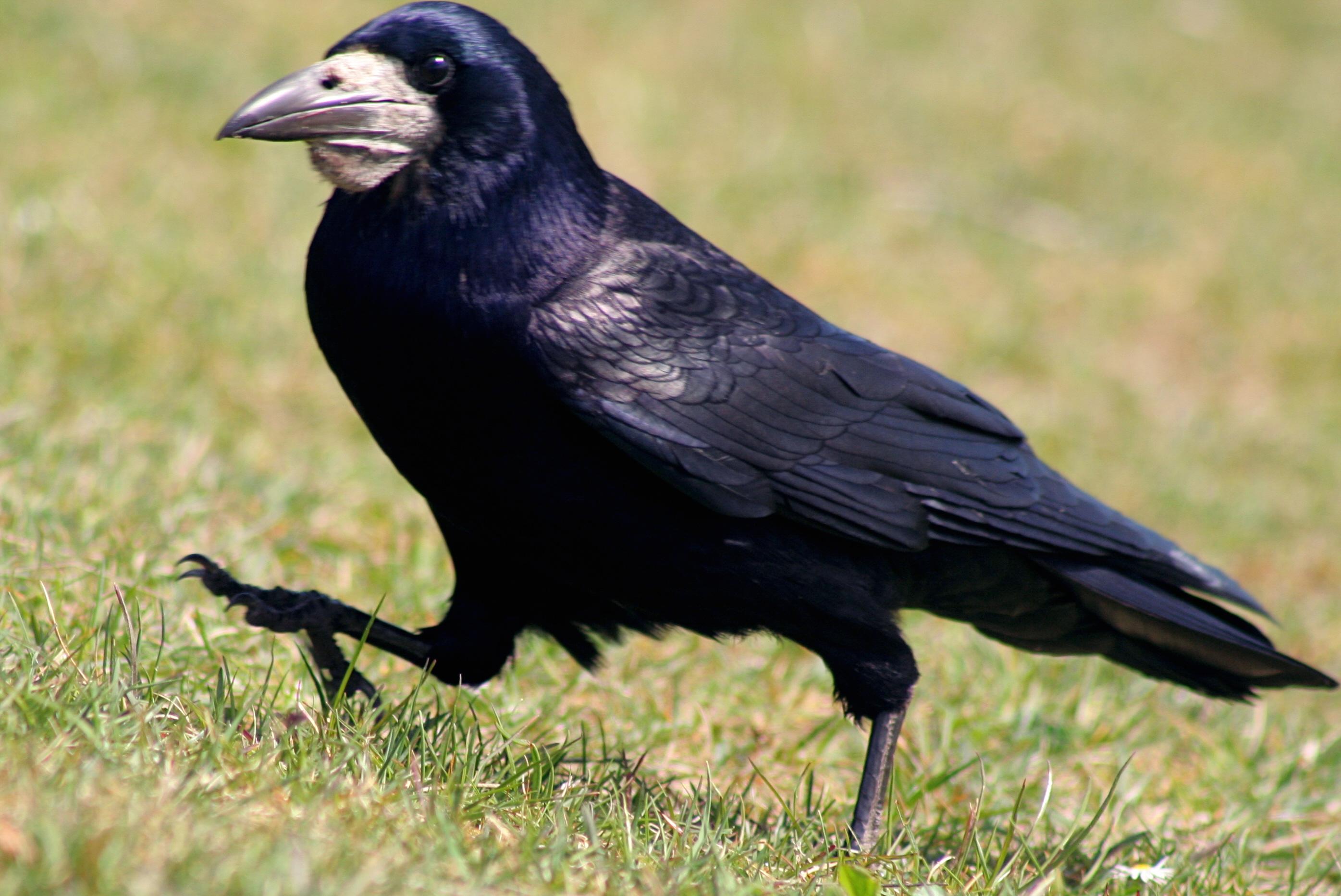 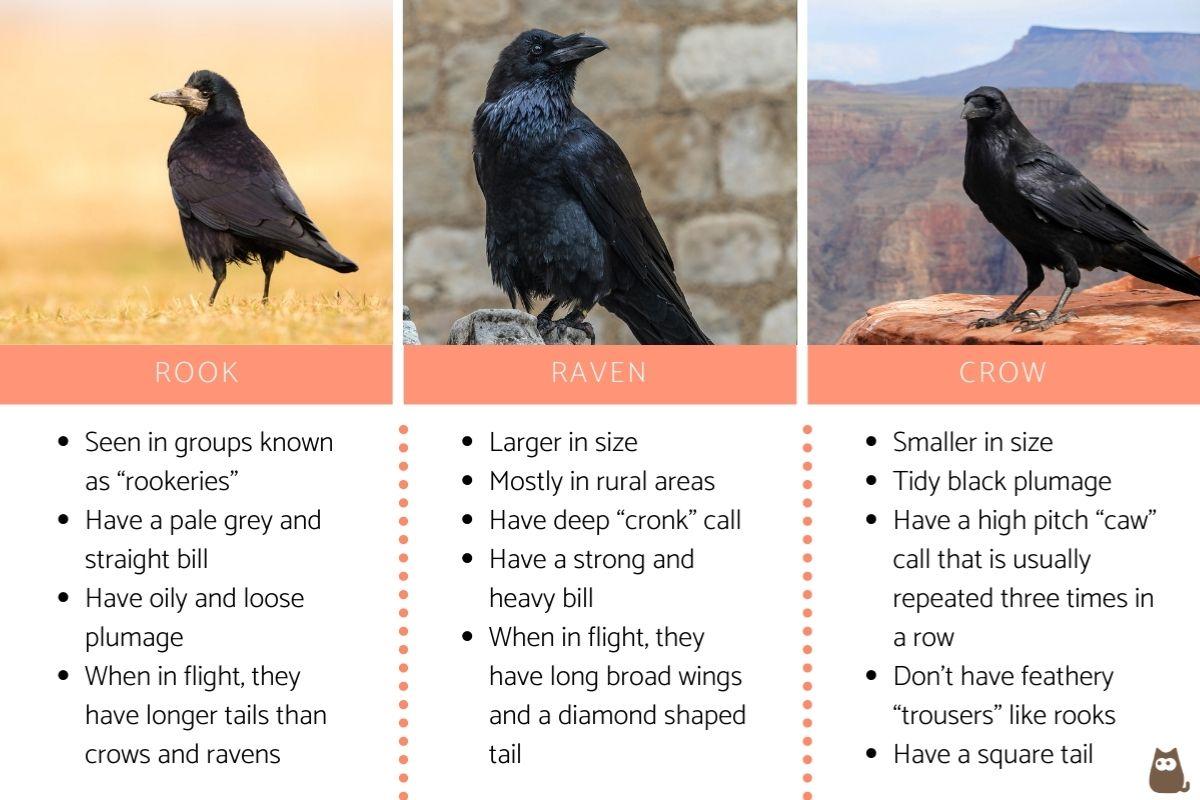 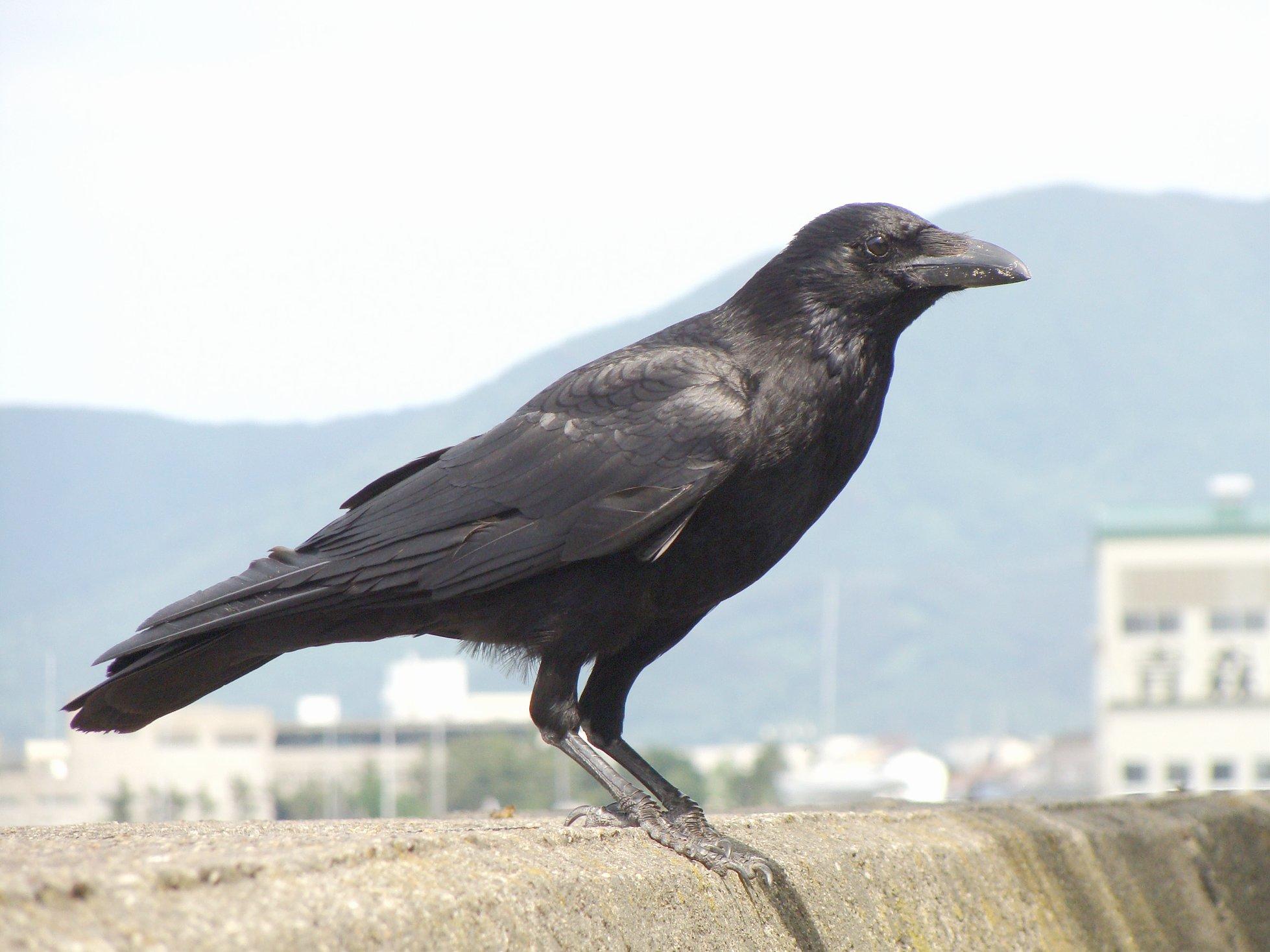 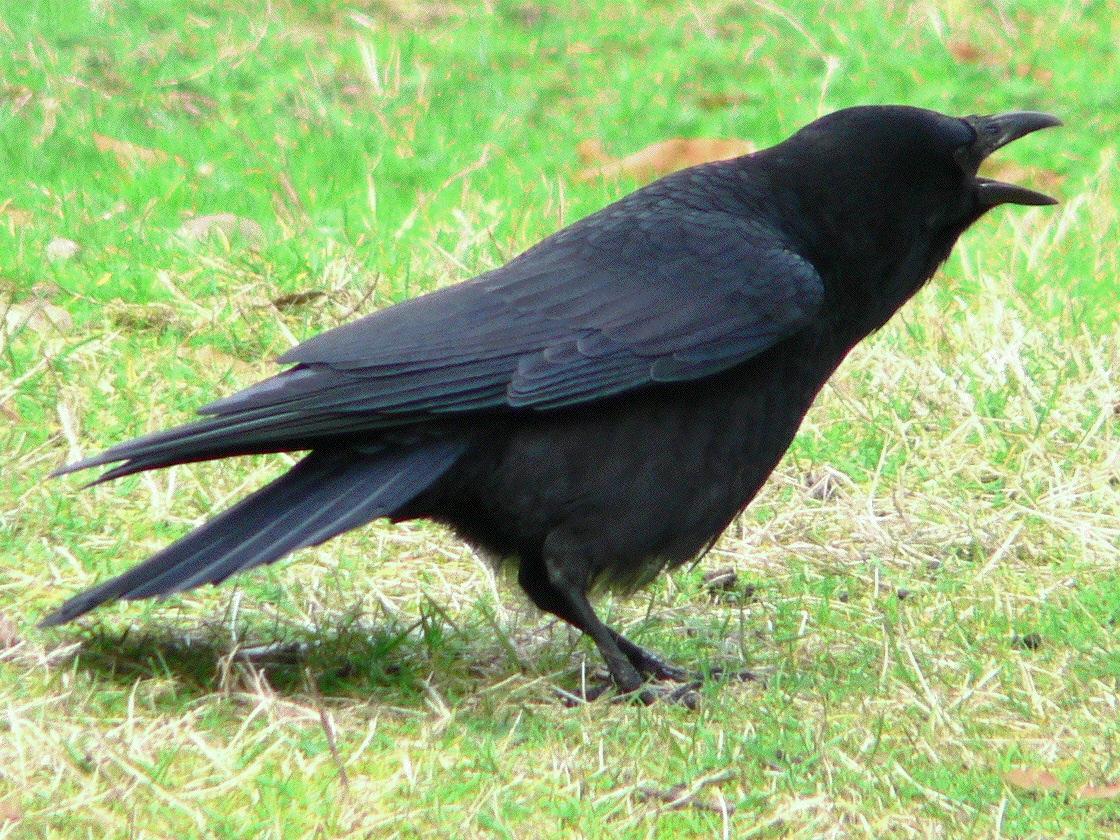 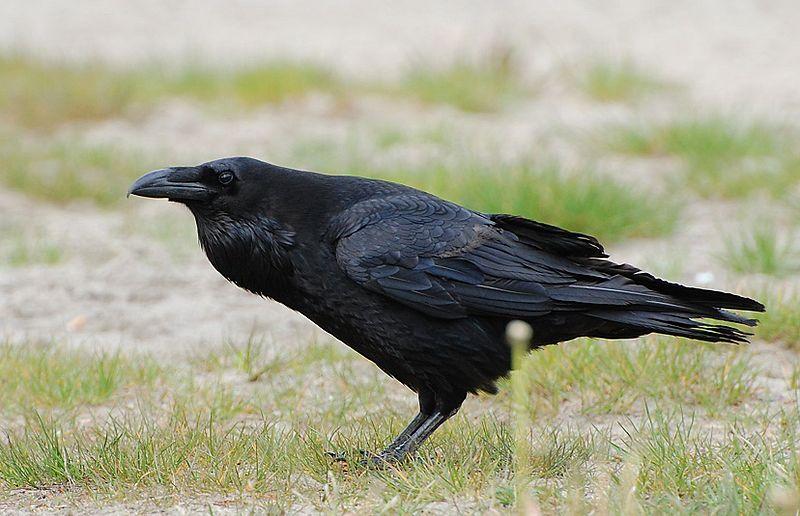 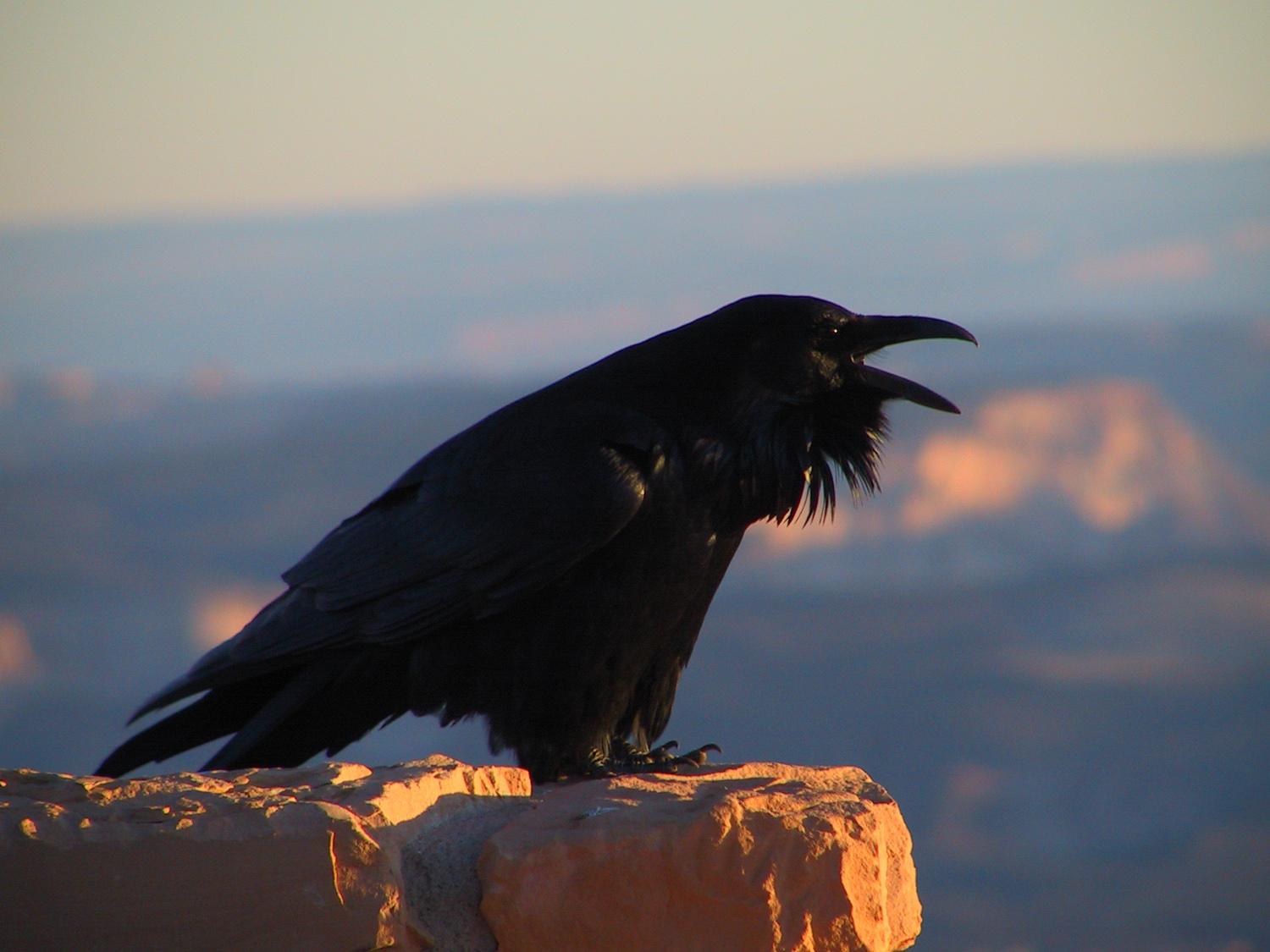 1 of 7
Differences Between Crows, Ravens and Rooks
Back to top