Why are Bengal Tigers Endangered?

The Bengal tiger, also called the Royal Bengal tiger and scientifically known as Panthera tigris tigris, is found in a multitude of habitats. This majestic predator can be found in high altitudes, tropical and subtropical rainforests, grasslands, and mangroves. Their encompasses territories across Bangladesh, Bhutan, India, Myanmar and Nepal.

However, the Bengal tiger is an endangered species. Although it is protected by wildlife laws and it has been chosen as the national animal of India, its numbers keep decreasing. Why are Bengal tigers endangered? Stay with us at AnimalWised and find out.

You may also be interested in: Endangered Animals of the Mangrove Forests
Contents

The Bengal tiger is an endangered species, with population numbers of around 2,500 by estimates from 2011. It is primarily found in India, although it has been occasionally spotted in the other east Asian countries such as China and Nepal.

They are one of the largest wild cats alive and their presence has impacted many cultures. For many people, they represent strength, power, beauty, bravery and much more. For this reason, they have been associated with sports teams, rebel uprisings and even breakfast cereals. Such fascination has led to great reverence for the Bengal Tiger, but how come the Bengal tiger is endangered?

Why are Bengal tigers endangered?

Unfortunately, it is not only the Bengal tiger population which faces adversity. All tigers are endangered. In fact, the Bengal tiger is the most numerous of all tiger subspecies. However, it is under constant threat of poaching. Tiger preserves, sanctuaries, and national parks have stabilized the population numbers, but poaching in Asia is still on the rise.

Bengal tigers are hunted illegally because their skin and some body parts are considered useful for traditional Asian medicine. Besides, Bengal tigers also face population fragmentation, habitat loss, and reduction of their usual prey.

While habitat destruction and loss of prey are important factors, the most significant in terms of immediate population depletion is poaching. Tiger hides are very expensive and much sought after. In traditional Chinese medicine, for example, tiger bones are used for treating typhoid, malaria and other ailments. These are not in effective in treating the ailments and the practice is barbaric.

However, there are also small populations in the Bengal Tiger's homeland which kill them as self-defense. Since human populations are growing, it has been known for tigers to kill humans and communities may hunt the tiger to prevent it happening again.

What do Bengal tigers eat?

Bengal tigers are carnivorous animals. They hunt large and medium-sized animals such as:

With the loss of habitat and fragmentation of population, the Bengal tiger is also facing a supply-and-demand problem. With lessening vegetation and increasing human encroachment, most of the herbivores on which this carnivore predator feeds are dwindling in numbers. Here you can learn, for example, why is the wild water buffalo endangered and what are the endangered animals of India.

As climate change and global warming threaten their natural habitat, Bengal tigers are facing a severe threat. With the rise in ocean levels, tigers are losing habitat due to coastal erosion in areas such as Sunderbans. Rising sea levels claim more of their habitat, and sea water enters rivers causing freshwater to become saline. These are the reasons the tiger is moving northward and facing a shrinking natural habitat.

How do humans harm Bengal tigers?

Animal and human interests often clash, bringing conflict. Humans have made the Bengal tigers' habitat shrink, encroaching on their population and displacing them from their natural homes. Bengal tigers are also seen as threatening for human herders and their livestock and thereby hunted.

At the start of the 20th century, the worldwide tiger population was estimated at 100,000. In just 100 years, the situation has turned for the worst and the survival of the great big cat is now in question.

Why are Bengal tigers poached?

Bengal tigers also face other human threats such as poachers and hunters, who kill them for their valuable pelt. There is a booming black market trade of this sort of items, with Bengal tiger body parts being used in traditional Asian medicine.

Moreover, Bengal tigers are perceived to be among the most dangerous animals in India, and they have therefore been hunted as a trophy for big game hunters.

How does industrialization affect Bengal tigers?

High population growth in India has reduced the range the Bengal tiger critically needs for its survival. Construction of roadways and crop cultivation has not only fragmented the Bengal tiger's territory, it has also reduced the availability of prey.

Today, the tigers' habitat range is 20 times smaller than what it was at the start of the 20th century. Between the 1940s and the 1980s, 3 of the 8 tiger subspecies had already disappeared – the Caspian, Bali and Java tiger did not survive hunting, poaching, and deforestation.

Industrialization affects other animal populations also. Some of the most venomous snakes in India don't have many natural predators, but their population can still decline due to deforestation, etc.

How has the Bengal tiger population declined?

Between 1900 and 1972, the Bengal tiger population fell dramatically. The Bengal tiger is still the most numerous of the subspecies, accounting for roughly half of the world's tigers. However, Bengal tigers have been associated with status symbols, decorative items, and folk cures. A new poaching crisis threatens this predator with the indiscriminate felling of trees and rapid urbanization. Could the price of development be the Bengal tiger?

What is the future of the Bengal tiger?

While there are many people who have dedicated their lives to poaching and destroying tiger populations, fortunately conservation work has been ongoing for a number of years. While international conservation institutions such as the World Wildlife Fund have helped to gather support, the individual countries need to act to help tiger populations.

In India, Project Tiger began in the 1970s and continues to this day to monitor and preserve tiger populations. This has encompassed various aspects, but one of the major movements was the creation of protected wildlife areas to allow the populations to grow. There have been various changes over time, with tiger populations increasing and decreasing. However, the latest census reports suggest there are some positive changes. Despite these findings, the Bengal tiger is officially considered endangered.

However well these conservation tactics work, there are other important factors. One of the most important is due to climate change. Some reports suggest that Bengal tigers may lose vital natural habitats by the year 2070[1]. This is why reversing the effects of climate change not only benefit humans, but all species on earth.

While the Bengal tiger is one of the most notable species threatened with extinction, there are, unfortunately, many other endangered animals in India we need to help protect.

The threat of extinction of certain animals exists in countries all over the world. If you want to learn more you can take a look at this video for animals in danger of extinction in Mexico: 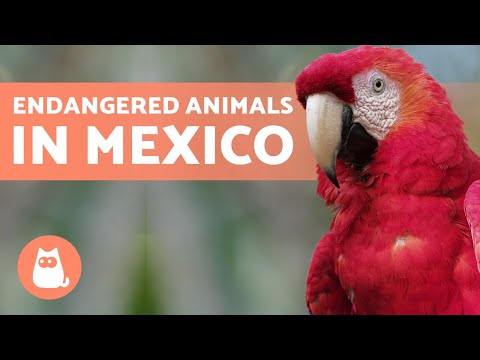 If you want to read similar articles to Why are Bengal Tigers Endangered?, we recommend you visit our Endangered animals category. 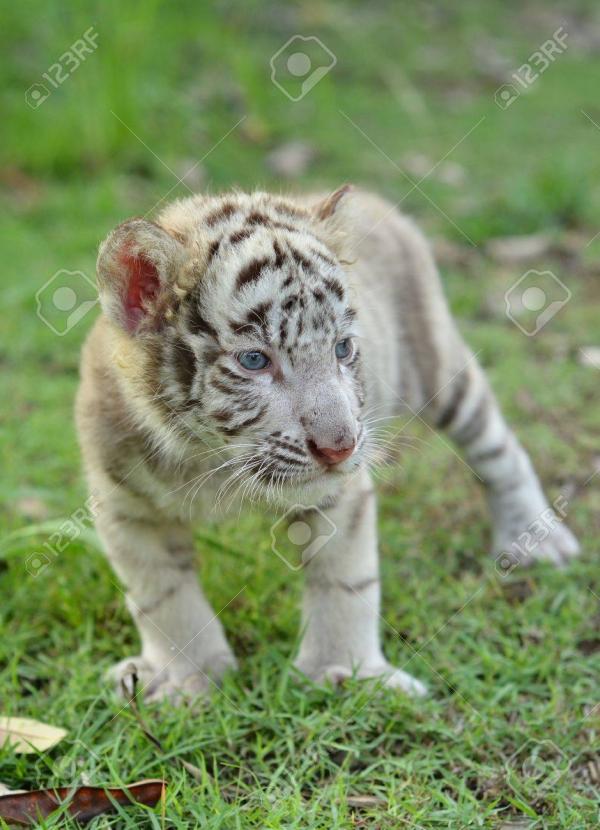 This is great info for a paper I have to write about Bengal tigers.
Rating:
sabastianb
06/08/2019
the wibesite is vre khjkhkjuyj;byjpifetkfhyh;n,dfr4thj
8 o;frybmui'k'kr[l;
Yeet
12/12/2019
the sun is a deadly lazer
your mom
15/01/2020
thxxxxxxx 4 the info
Silvana
01/03/2021
I really liked this article, and it was pretty helpful for my project. I hope tigers don't get extinct :)
Why are Bengal Tigers Endangered? 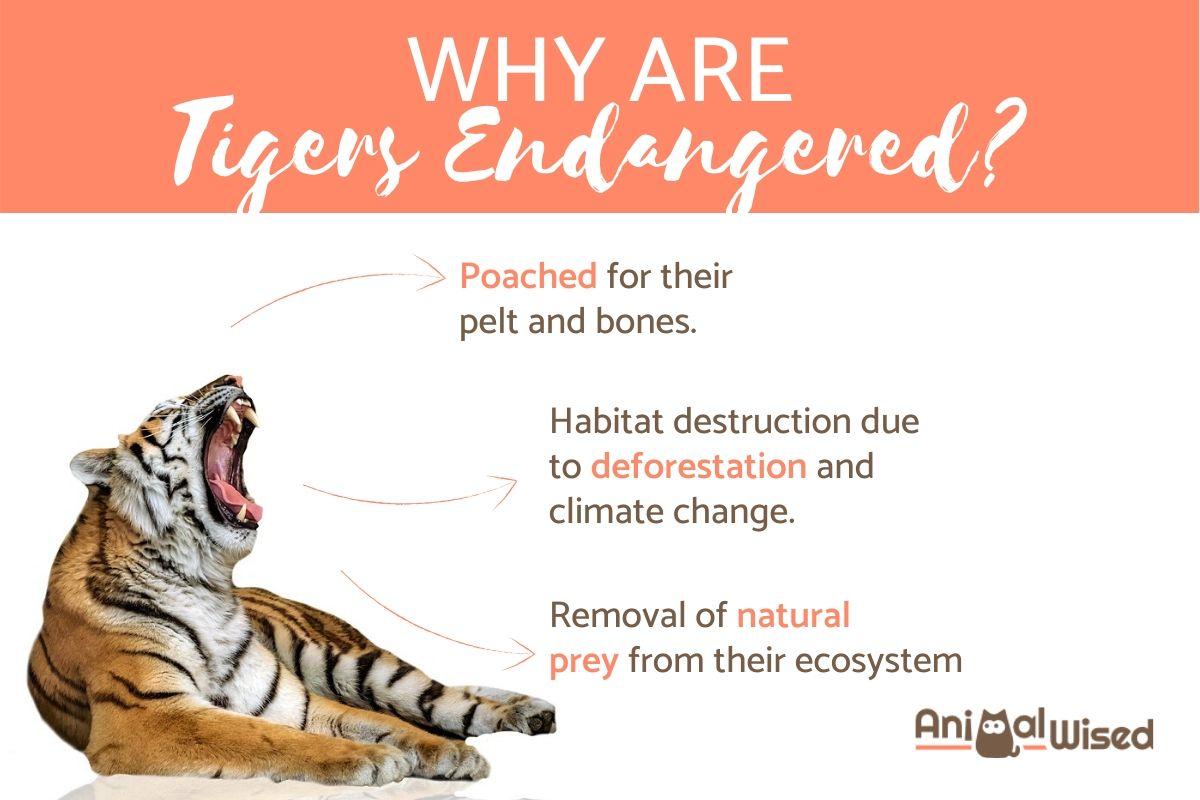 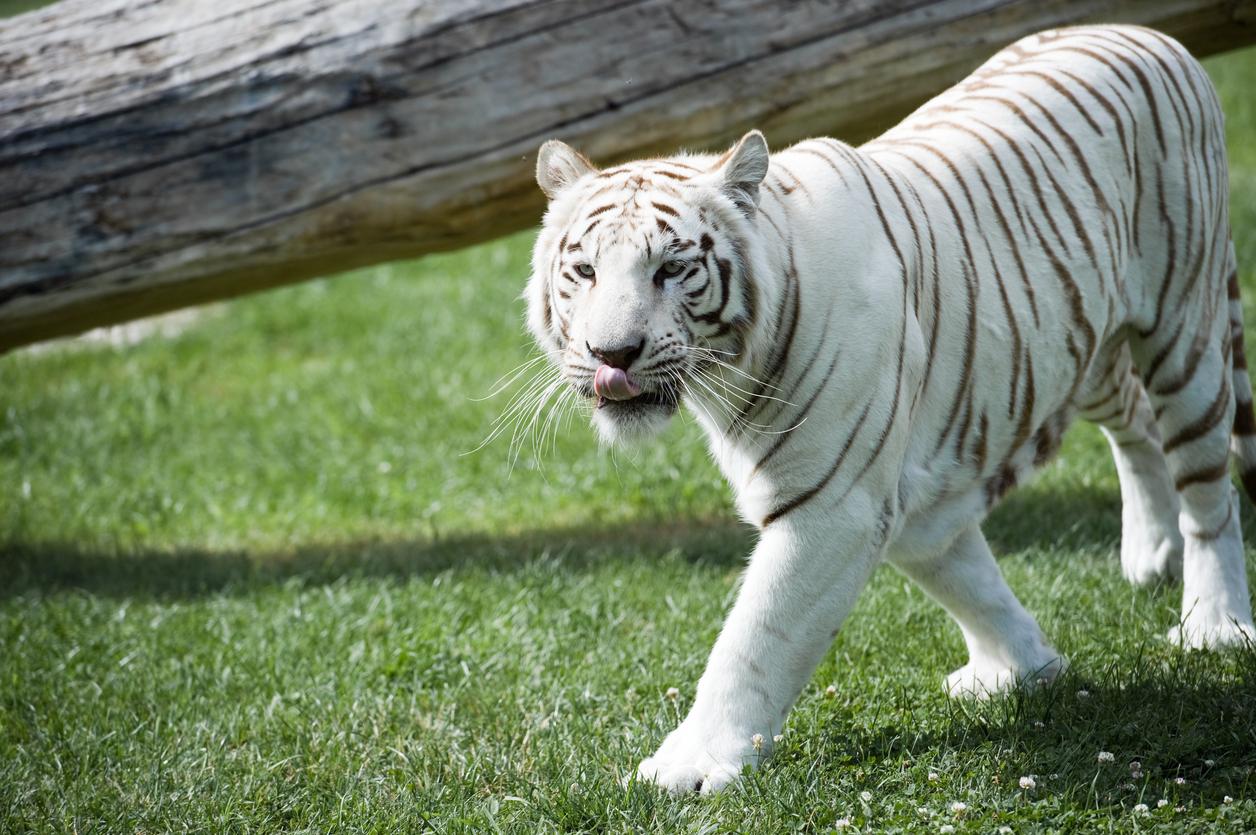 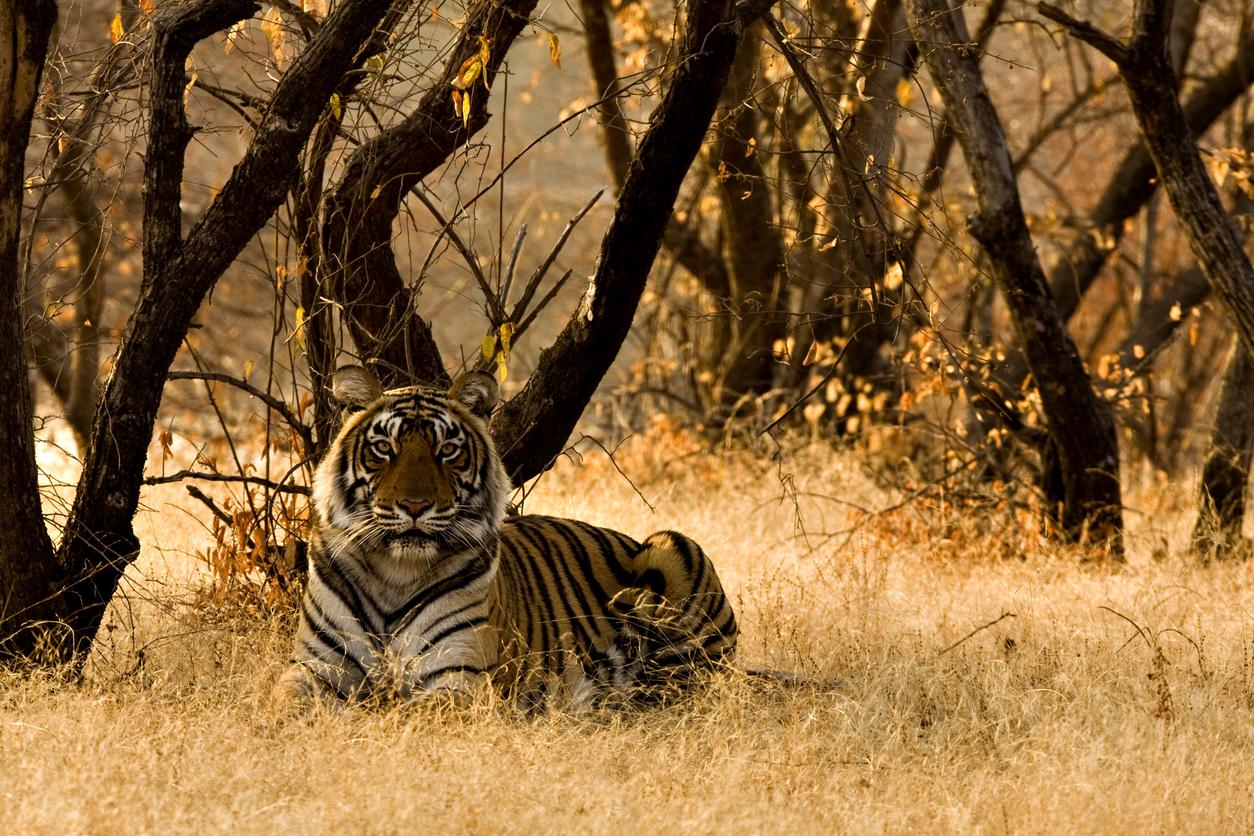 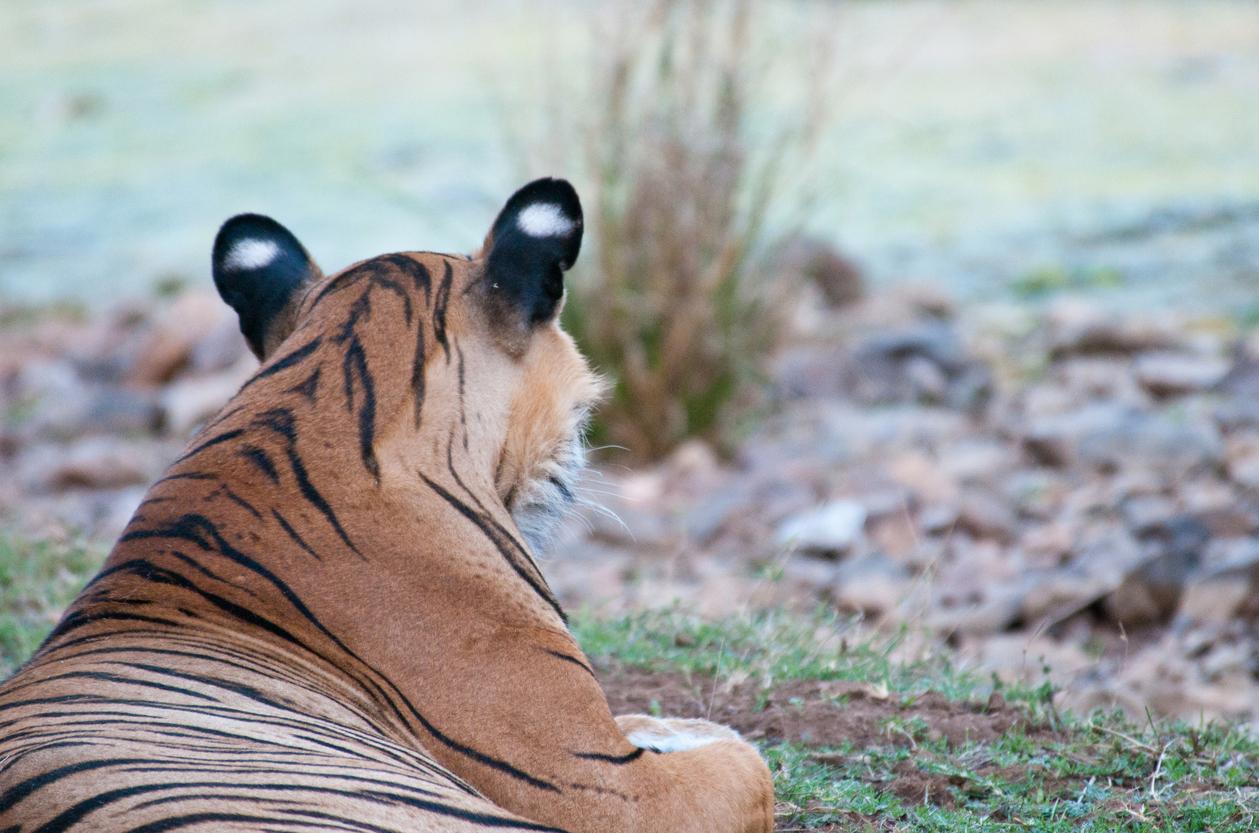 1 of 4
Why are Bengal Tigers Endangered?
Back to top