Why Does My Rabbit Run In Circles? Possible Causes and Solutions 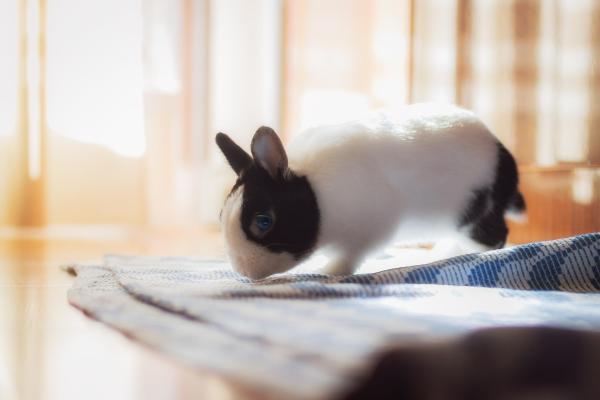 Even though rabbits make fantastic pets, their behavior can sometimes be confusing to new owners. If you have ever had a rabbit as a pet at home, you have probably seen it running in circles around you, tracing a path between your legs. This behavior, also known as circling, is common in domestic rabbits.

In this AnimalWised article we will explore why your rabbit is running in circles and what you can do about it.

You may also be interested in: Aggression In Rabbits - Causes
Contents

Why does my rabbit run in circles?

Rabbits have a peculiar habit of running in circles or in the form of an inverted figure eight around their owners' legs, both to the right and to the left, for long periods of time. They can also circle around other rabbits. Although this behavior can be amusing at times, it causes concern for many rabbit owners who wonder why their rabbit runs in circles so frequently, almost obsessively. Although the behavior may have been conditioned and therefore may serve other purposes, the most common reason your rabbit circles your legs is that he is experiencing a peak in his heat season. In other words, circling is a form of courtship behavior, indicating a rabbit wants to mate.

Throughout the year, both male and female rabbits experience peaks of sexual activity. During these peaks, their behavior may change, becoming more aggressive and restless, mounting objects or marking them with urine. Rabbits reach sexual maturity between 4 and 6 months. Rabbits that haven't been spayed or neutered will often circle other rabbits as a mating dance.

Rabbits don't only circle other rabbits; they enjoy circling humans too, though for slightly different reasons. Rabbits like to circle their owners' feet, especially while they're standing up. They can do this because they are asking for pets, they are begging for food, or they want to initiate play or tell you that they love you.

If you are interested in learning how to tell if your rabbit is sick, don't miss out this article on symptoms of a sick rabbit.

Why does my rabbit roll over on itself?

Besides running around in circles, you might notice that you rabbit rolls over itself. There are several reasons why your rabbit has started doing this. To figure out why, it is important to consider some factors, including the context in which this behavior occurs, the frequency, duration, and intensity. Usually, there are two main causes of this behavior:

There are times during the day when your rabbit is simply more active than usual, especially when he is young. If you notice this, it is important to give your rabbit the opportunity to go outside and exercise or explore his surroundings at his own pace. You will notice your rabbit becoming playful and taking quick, short turns, interspersed with small jumps and runs. This is normal and healthy behavior that reflects the rabbit's desire to interact with you and have fun.

On the other hand, if your rabbit spins several times a day and does so especially when they are in a cage, alone, around unfamiliar animals or people, or when there is a lot of noise, this could indicate that they are suffering from stress or anxiety. Rabbits easily become stressed if their needs are not adequately met or if their environment does not provide them with enough comfort. When there are no other rabbits or animals around, a rabbit will rarely run in circles, but if they are stressed, they may pace back and forth or hop around. Your rabbit aren't happy if they are running in circles in a cage.

There are several reasons why a rabbit may suffer from chronic stress that manifests itself in repetitive and compulsive behaviors, including:

If you want to know more about why do rabbits become aggressive, keep reading this article on aggression in rabbits.

What to do to stop my rabbit from spinning?

To take the right action, you need to figure out what is causing your rabbit to circle. If you are not sure what is causing this behavior, you should consult your veterinarian to rule out health problems. You should also consult an ethologist who specializes in rabbit behavior to diagnose the problem and develop an intervention plan.

If your rabbit is spinning around you or other rabbits incessantly, in addition to exhibiting other behaviors such as excessive riding or urine marking, then heat is likely the cause. The most definitive solution in this case is neutering. If we own several rabbits and have both males and females, sterilization is necessary to prevent them from reproducing uncontrollably and to avoid the stress that could drive them into heat. You can also see neutered rabbits circle each other, and display other courtship behaviors. It's not as common, but it can happen, even after two month after the operation. This is because it may take several weeks for your rabbit's reproductive hormones to leave its system completely. All rabbits respond differently to neutering. Some rabbits display courtship and territorial behaviors even after being neutered.

You do not need to worry or try to stop your rabbit from turning quickly when you interact with him as part of a game. To prevent this behavior from becoming too intense, distract your rabbit by offering something to do to entertain themselves, such as an interactive toy or something they can nibble on. Alternatively, you can play with them directly or teach them tricks and skills, as rabbits can easily learn many tricks when they are positively reinforced.

Seek out a professional

It is important to take your rabbit to the vet if they're circling too frequently, if they always follow the same pattern of movement, if they seem restless or agitated, stop eating or cleaning themselves, or become listless and even aggressive. If your rabbit is exhibiting any of these symptoms, it could be suffering from a disease or be stressed in some way. Once you have ruled out organic disease, you should consult an ethologist who is knowledgeable about rabbit behavior to assess the situation.

If you wish to know more about rabbit behavior, don't miss out on this article on why does my rabbit lick itself?

If you want to read similar articles to Why Does My Rabbit Run In Circles? Possible Causes and Solutions, we recommend you visit our Behavioral problems category.

Why is my Dog Aggressive with People? Causes and Solutions
Cat Sleeping in the Litter Box - Causes and Solutions
Why does your Cat Bite you?
Why Does My Rabbit Pee on Me?
Related categories
Basic educationAnimal games and funSportsAdvanced education
Most read
1.
Why is my Dog Pooping in the House Suddenly?
2.
Tips to Train an American Bully
3.
Why Is My Dog Suddenly Scared Of Me?
4.
How to Make a Pit Bull Release its Bite
5.
What Does It Mean When a Dog Lifts a Front Paw?
6.
How To Stop My Cat From Biting My Ankles
7.
Why Does my Cat Lick and then Bite Me? The Answer
8.
Tips on How to Train a Cane Corso
Why Is my Cat Peeing Everywhere? All Possible Reasons
Why Does My Rat Bite Me?
Why does My Dog Eat Everything in Sight?
Why Does my Cat Wake me up in the Morning? - Answer & Solutions
Why Does My Dog Roll in Poop?
Why Does My Dog Bark at Nothing?
Why Does My Cat Keep Pooping on the Bed?
My Dog Destroys Their Toys

Why Does My Rabbit Run In Circles? Possible Causes and Solutions 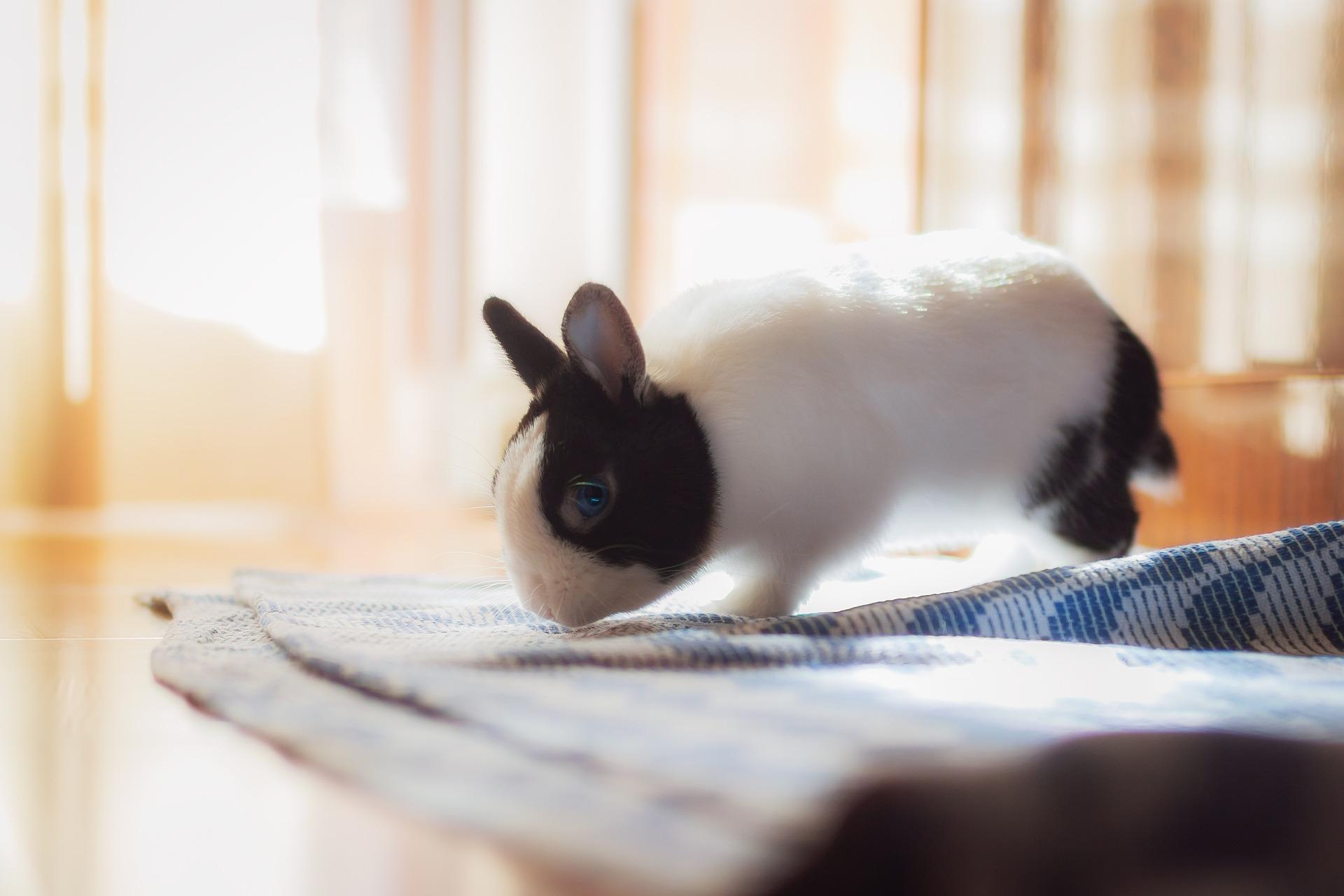 Why Does My Rabbit Run In Circles? Possible Causes and Solutions
Back to top