By Laura García Ortiz, Veterinarian specialized in feline medicine. May 25, 2022

Feline atopic dermatitis is a type of allergic response. When a cat has a hypersensitivity to a particular environmental allergen, they body reacts in an exaggerated way. These allergens can include dusts, mites, pollen or other common environmental stimuli. These allergens do not affect those without such a sensitivity. The main clinical sign is a reddening, flaking and inflammation of the skin which can leak fluid and cause bleeding lesions. It is for this reason, atopic dermatitis is also known as atopic eczema.

At AnimalWised, we provide everything you need to know about atopic dermatitis in cats. We look more specifically at its causes and symptoms, as well as what treatment options are available when it affects your cat.

You may also be interested in: Miliary Dermatitis in Cats - Causes, Symptoms and Care
Contents

What is the atopic dermatitis in cats?

Atopic dermatitis is a common skin pathology in cats that causes itching. Atopic dermatitis is considered a type 1 allergy or hypersensitivity reaction to environmental allergens such as pollen or dust mites, among others. This means the reaction is fast and can occur within seconds.

There are various types of dermatitis in cats. It is often a symptom, rather than a condition in itself. Dermatitis refers to any type of inflammation of the skin. Atopic dermatitis or atopic eczema refers to an inflamed skin condition caused by allergens.

Pathogenesis of atopic dermatitis in cats

In dogs, atopic dermatitis is shown to have a genetic origin in some cases. This is why some breeds are more likely to get it than others. No such conclusive research has been carried out in cats. The result is that it is considered an idiopathic condition, i.e. there is no known cause. Neither is there a predisposition in certain breeds.

The pathogenesis (i.e. how the disease develops) is complex and requires further study for conclusive results. There are some aspects of its development we do know. As with humans, atopic dermatitis is thought to be associated with high activation of T-lymphocytes, poor cellular immunity, hyperstimulated Langerhans cells and low IgE (immunoglobin E) production on antibody-producing B cells.

The dermatitis itself is the result of an abnormal biochemical response and secretion of mediators by monocytes, mast cells and eosinophils. In the case of cats, it is likely the skin inflammation will be prolonged and exacerbated by the cat's continuous scratching or licking. Even when they are no longer exposed to the allergen that triggers the allergy, they will do so to try to alleviate the irritation, discomfort and pain.

Symptoms of atopic dermatitis in cats

There are several clinical signs that can suggest a case of feline atopic dermatitis, but none can confirm a diagnosis in themselves. Symptoms usually appear between the first and third year of life, although it has also been observed in animals as young as 4 months or over 15 years old. Dermatitis can be seasonal, usually associated with pollen, or non-seasonal. The latter are generally associated with allergens such as dust and its mites.

Among the most frequent clinical signs we find pruritus (itching) of different degrees of intensity. Accompanying dermatological signs include erythema (redness of the skin), hyperpigmentation (increased darker color), lichenification (raised and thickened skin). These often occur on the interdigital area of the paws, the concave part of the ear pinnae, the ear canal, the abdomen, the periocular area, the lips and the armpits. It is also common for these areas to have alopecia depending on the degree of inflammation and the duration.

Learn more about alopecia in cats with our article on why a cat has patches of hair missing.

A secondary infection by bacteria such as Staphylococcus or fungi such as Malassezia pachydermatis is common in these areas. Staphylococcus infection produces a superficial pyoderma in cats that commonly presents pustules or crusts and circular alopecic areas with scaly edges, known as epidermal collarettes. These are similar to round lesions caused by ringworm fungus.

Another sign that is also common with atopic dermatitis in cats is external ceruminous otitis. Generally, it occurs due to prolonged erythema that can produce hyperplasia of the tissues inside the pinna and ear canal. This predisposes an increased secretion of the glands. This secretion functions as a culture medium for yeasts and bacteria that cause otitis.

Other signs that atopic dermatitis can produce in cats are:

Diagnosis of atopic dermatitis in cats

Feline atopic dermatitis should be a diagnosed with a differential diagnosis so that pathologies and conditions with the same allergic symptoms in cats can be ruled out. These similar conditions include:

Allergy tests are performed when the diagnosis of atopic dermatitis has already been established. These are part of a diagnosis by exclusion. Essentially, different allergens are removed from the cat and we can see the reaction. The veterinarian will use medical history and other information to best determine the probable allergens and work from there. Afterwards, an allergen-specific immunotherapy will be carried out.

These tests are usually based on allergen-specific IgE serology to measure the reactivity of blood antibodies against the allergen. Intradermal tests may be used in some cases by introducing the allergen directly into the cat's skin and observing the reaction.

To avoid inaccurate results with these tests, corticosteroids such as prednisolone should be withdrawn for three weeks before the test and antihistamines administered for 7 to 10 days before the test. To control the cat's itching during this time until testing, 1% hydrocortisone lotions or sprays can be applied to the affected areas twice daily. This is as long as that area is not going to be tested.

The treatment of feline atopic dermatitis is based on the use of various drugs and products to control and prevent symptoms. In general, combination therapy with glucocorticoids, immunotherapy, cyclosporine, antihistamines and/or essential fatty acids is used.

These drugs are the mainstay of treatment for atopic dermatitis in cats to control itching and inflammation. Prednisolone (a synthetic cognate of prednisone for cats) is usually administered at a dose of 1-2 mg/kg daily for 7-10 days. This is used as the lowest possible dose that controls clinical signs. Methylprednisolone can also be used at a dose of 0.8 mg/kg every 24 hours and should also be reduced in the same way to the lowest effective dose.

It consists of the progressive administration of greater quantities of the allergen with subcutaneous injection to reduce or eliminate the clinical signs of future natural exposures. This treatment should be carried out for at least 9-12 months. In most cats there is a 50% reduction in these signs. However, they usually need some adjuvant treatment of the ones stated here to completely control the symptoms.

The drug cyclosporine for cats is authorized for use in feline atopic dermatitis at a dose of 7.5 mg/kg orally every day. However, this drug causes immunosuppression and can cause secondary infections or reactivation of immune-mediated diseases such as toxoplasmosis or feline herpesvirus, especially if combined with glucocorticoids.

Although not licensed for use in cats, antihistamines may be helpful in reducing symptoms in 40-70% of cases. They may be administered alone or in combination with glucocorticoids and essential fatty acids. The most frequently used are chlorpheniramine and cetirizine. Only administer antihistamines to your cat under the strict direction of your veterinarian.

Foods rich in omega-3 fatty acids serve as an aid to control itching in 20-50% of cats, but their effect can take up to 3 months. Better results are obtained if they are combined with glucocorticoids and antihistamines.

Home remedies cannot replace veterinary treatment and many are both ineffective and can cause further injury. There is potential therapeutic value in topical aloe vera in the areas affected by atopic dermatitis. However, it should not be ingested by the cat, something which is difficult to prevent with self-grooming. If the cat is exacerbating the inflammation by licking and/or scratching the area, they will require an e-collar until the swelling subsides.

If you want to read similar articles to Atopic Dermatitis in Cats - Causes, Symptoms and Treatment, we recommend you visit our Skin problems category. 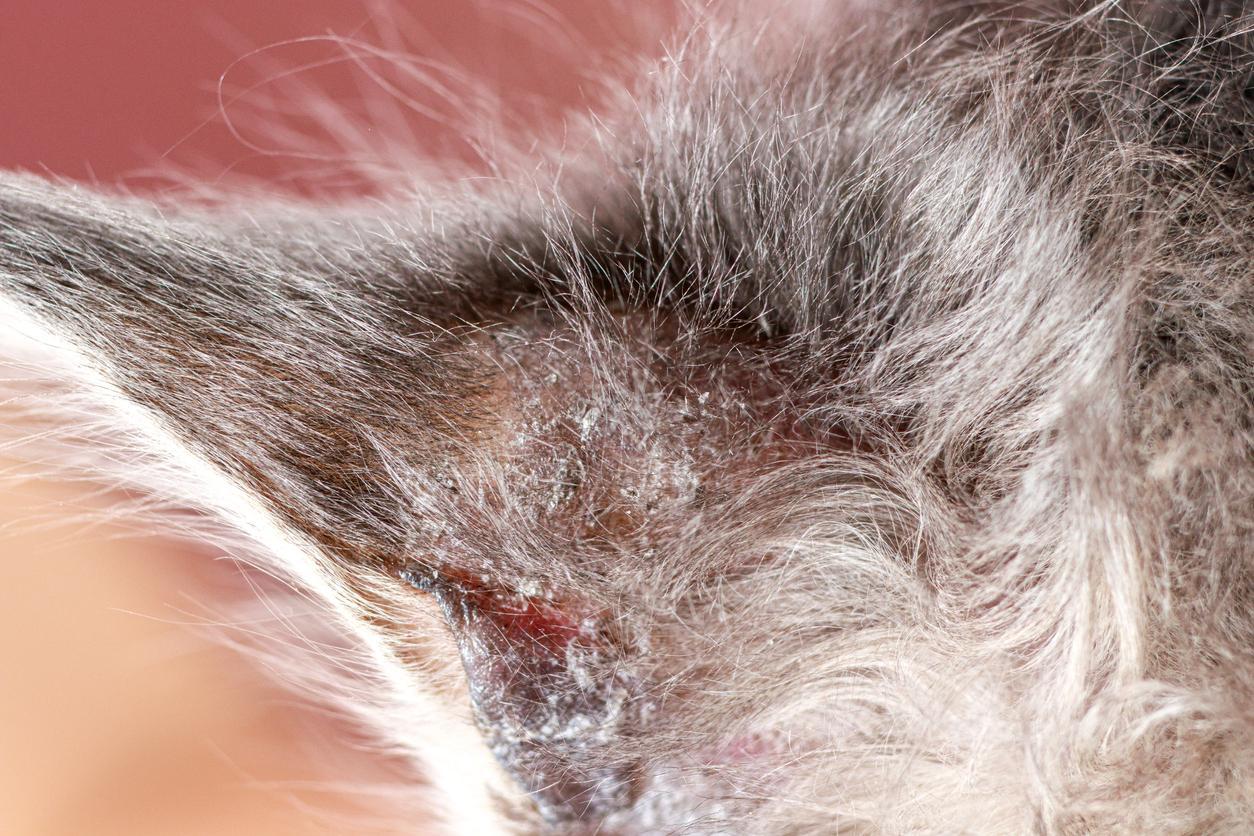 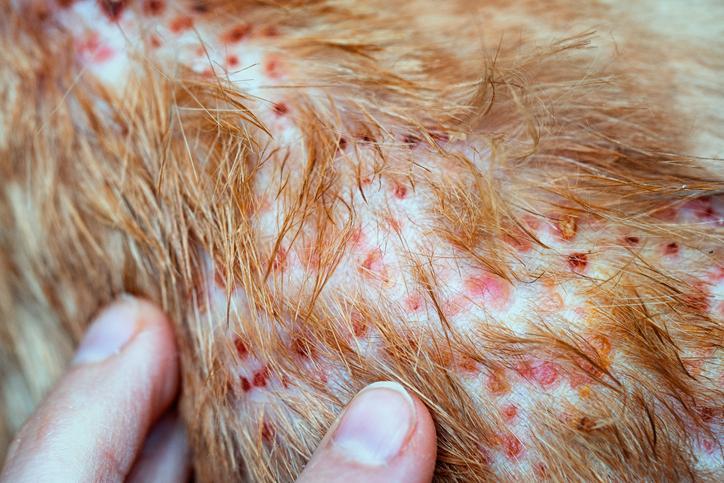 1 of 2
Atopic Dermatitis in Cats - Causes, Symptoms and Treatment
Back to top