Differences Between a Swan Vs Goose Vs Duck

By Nick A. Romero, Biologist and environmental educator. June 3, 2021

Although the diversity among birds is vast (think of the difference between a penguin and a hummingbird), it is true there are some bird species which closely resemble each other. Sometimes we can't even tell the difference until we are up close. To understand the difference between these birds, we can look at their taxonomic organization. However, due to the vast variety of bird species. it is difficult to pinpoint their taxonomy when observing these birds in the wild. This is why we have to look at physical and behavioral differences between them.

Swans, geese and ducks are animals many people confuse with each other. At AnimalWised, we explain the differences between swans vs. geese vs. ducks so you can spot the difference if you see any in the wild.

Taxonomy of swans, geese and ducks

The swan, goose and duck all belong to the order Anseriformes and the family Anatidae. The differences lie both in the subfamilies in which they are included, as well as in their genus and species:

This group corresponds to the Anserinae subfamily and the Cygnus genus. The best known is the white swan (Cygnus olor), but there are six total species, as well as some subspecies.

The goose also belongs to the Anserinae subfamily, one of the reasons it can be tricky to distinguish between swans and geese. Geese are largely considered those within the genera Branta (black geese) and Anser (white geese). Perhaps the most widely known in the white geese genus is the common goose (Anser anser). However, there are some other species which are considered ‘unresolved’. These include the Cape Barren goose (Cereopsis novaehollandiae), among others.

Another reason why taxonomy is a difficult way to differentiate between waterfowl species is that duck species are incredibly varied. This leads to many problems in terms of their classification. For this reason and others, ducks are generally grouped under ‘form classification’, i.e. by their morphology. Generally, ducks are grouped into three categories:

The swan, goose and duck are all considered water birds, although the time spent on or near water can vary considerably. To understand more, take a look at our article on types of water birds.

Physical differences between swan vs. goose vs. duck

Each of these types of bird have the common features of all waterfowl, but there are many differences which can help to distinguish them. Size is one of the most important factors when determining whether a bird is a swan, goose or duck, but size alone usually won't ne sufficient. In terms of size, largest to smallest of these birds is the swan, goose and duck. Neck length is also a key factor, which mirrors the birds in terms of size.

The most distinctive feature of the swan is their long neck. Most swan species are white in color, but we can also see them in black or a white body and a black head. These birds are characterized by being quite large, varying between 6 to 15 kg (13-33 lbs), depending on species. All swans exceed one meter in length and adults can have a wingspan of up to 3 meters.

There is generally no sexual dimorphism, but the male is slightly larger than the female. The beaks are robust, orange, black or combined, depending on the species. The legs are joined by a membrane that allows them to swim.

Geese are large aquatic migratory birds, the largest and most robust being the common goose. This species, which can weigh about 4.5 kg/10 lbs and measure up to 180 cm, including the wingspan. The coloration varies according to the species, displaying white, gray, brown and even mixed colors.

Their beaks are large and generally orange in color, as are their legs. Although there are certain exceptions, these limbs are adapted for swimming.

The goose has a neck size larger than the duck, but smaller than the swan. They are birds with an energetic flight capability.

Ducks exhibit the greatest variety of plumage colorations when compared to swans and geese. We can find species of one or two colors, but there are also many with combinations of various colors. They are distinguished from geese and swans because they are the smallest of the three, with shorter wings and necks, with generally robust bodies. There are species with a marked sexual dimorphism.

They do not usually exceed 6 kg/13 lbs in weight and 80 cm in length. They are birds adapted to swimming and can fly long distances. Their beaks are usually flatter than the swan and goose.

Habitat of the swan vs. goose vs. duck

All three bird types have a worldwide distribution. This is both due to their migratory habits and human interference. This is due to domestication, generally due to their use in farming. However, more recently it is common to see ducks kept as pets.

Geese inhabit almost all of Europe, as well as much of Asia, North America, and North Africa. Swans are spread over various regions of America, Europe, Asia and Australia. As for ducks, they are widespread on all continents with the exception of the poles.

It is important to bear in mind that in regions where these birds are not originally native, it is currently possible to find them due to human interference, whether purposeful or not. To learn more about migratory birds, take a look at our article on the different types of swallow.

Behavioral differences of the swan vs. goose vs. duck

In their behavioral traits, we can also find notable differences between ducks, geese and swans:

There are behavioral differences even between swan species. For example, the black swan (Cygnus atratus) is sociable non-migratory water bird, whereas the mute swan (Cygnus olor) is quite territorial and can either live in pairs or form large colonies. Depending on the species, swans can be more vocal than others. However, they generally hiss, snort or even growl.

Geese are gregarious birds, flying in their distinctive 'v' shape when in groups. They are generally very territorial animals, capable of defending their space quite aggressively. When they do, they often emit a characteristic loud honk. In the cases of domesticated individuals, they can behave in a more sociable way.

As for ducks, they can present different types of behavior according to species. Some tend to live in pairs, while others in small groups. Several species can be shy and territorial, while others allow a certain approach. They may even live in ponds or artificial bodies of water close to humans. Ducks make short, dry sounds, which are seen as nasal and known as a quack.

Reproduction of swans vs. geese vs. ducks

The forms of reproduction between geese, swans and ducks also vary according to the group. To understand them, let's learn how each reproduce:

Swans mate in pairs for life and build the largest nests of the three bird types. These can measure up to 2 meters in width and be in floating formations or close to banks. They can nest in small or large groups located close to each other. Although it is generally the female who incubates, the male can eventually replace her by nesting on the eggs. Both the number and color of the eggs can vary from one species to another. In some cases they lay one or two eggs, others up to 10. The colors vary between greenish, cream or white.

Geese form pairs for life and are together almost all year, replacing a partner only if one dies. The common goose, for example, is used to forming nests on the ground near bodies of water where it lives. Although they nest in groups, they establish a certain distance from each other. It lays about 6 eggs which are white and almost elliptical in shape. They do so only once a year and, although the male remains nearby, they are incubated only by the female.

Ducks reproduce differently depending on the species. Some nest near bodies of water, while others may nest from these or even in nests that they build in trees. Some lay up to 20 eggs, which will sometimes be cared for by the mother or by both parents. As for the coloration of eggs, this also varies in shades of cream, white, gray and even green.

The goose is a herbivorous animal that grazes throughout the day. They are able to consume plants, roots and shoots, both inside and outside the water. For more information on this type of diet, do not miss this other article on herbivorous animals.

For their part, swans consume aquatic plants and algae. They may also eat some small animals such as frogs and insects.

Lastly, ducks feed primarily on plants, fruits, and seeds. However, they can also eat insects, larvae, and crustaceans. Contrary to popular belief, they should not eat cereals such as bread.

If you want to read similar articles to Differences Between a Swan Vs Goose Vs Duck, we recommend you visit our Facts about the animal kingdom category.

Bibliography
Seal vs. Sea Lion vs. Walrus
Butterfly vs. Moth - Differences Between Moths and Butterflies
Different Types of Swans
Reptiles Vs. Amphibians
Related categories
Endangered animals
Most read
1.
What Animal am I According to my Zodiac Sign?
2.
10 Most Beautiful Animals in the World
3.
What Does It Mean When a Cat Shows Up at My Door
4.
The 10 Most Solitary Animals in the World
5.
Top 10 Smells Dogs Hate
6.
Why do Dogs Get Stuck when Mating?
7.
How Many Types of Lions Are There?
8.
My Female Dog In Heat Won’t Accept A Male - Causes
Frog Vs. Toad - What is the Difference?
Rabbit Vision vs. Human Vision
Herbivorous Birds - List of Herbivore Birds
What is the Difference Between a Llama and Alpaca?
Differences Between Lions and Tigers
Differences Between Deer, Elk, Moose and Reindeer
Purebred vs. Mixed Breed Cats - Advantages and Disadvantages
Similarities Between Humans and Chimpanzees - Behavior and Biology

Differences Between a Swan Vs Goose Vs Duck 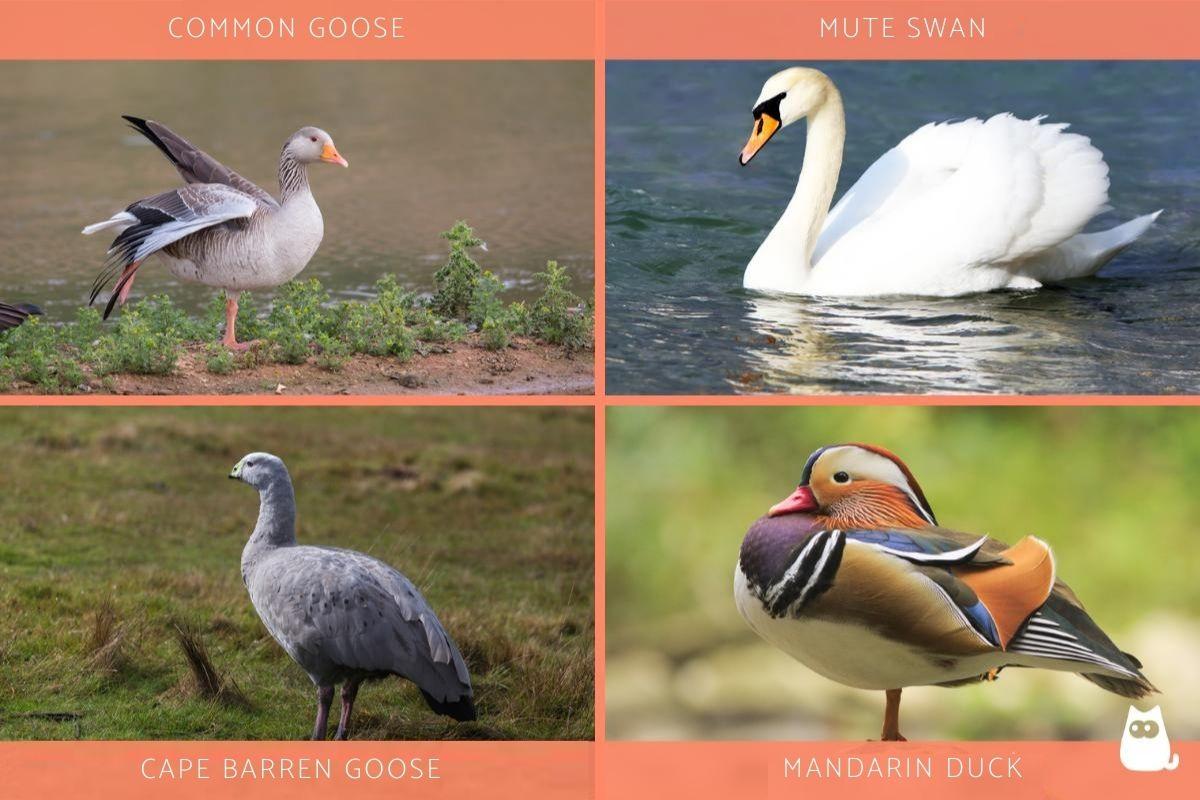 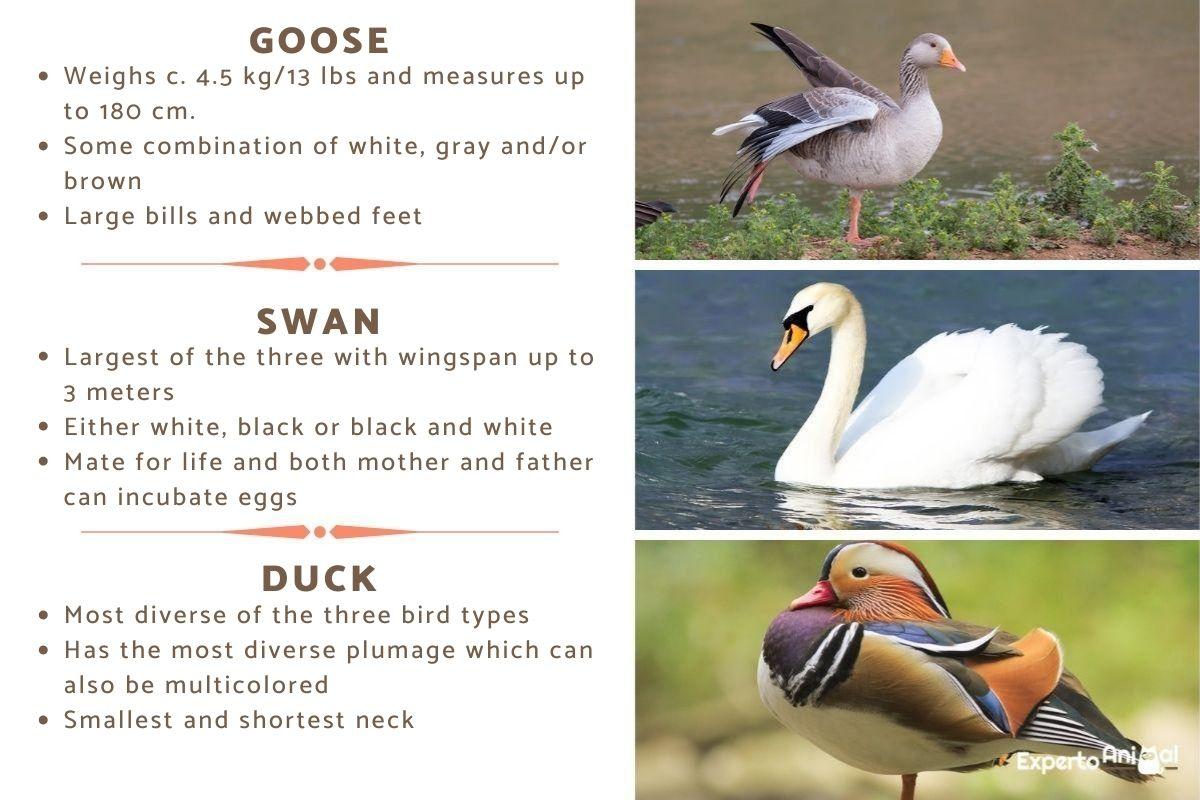