By Nick A. Romero, Biologist and environmental educator. November 16, 2022

Penguins (Spheniscidae) are a family of birds, the only one of the order Sphenisciformes. There are at least eighteen living species, belonging to six genera, distributed from the poles to the tropics of the Southern Hemisphere. Penguins are known among birds for their feathered tuxedos and graceful gait. But there are so many surprising details about these birds that you may not know. This is why we have compiled some of the most outstanding and well-known aspects of these amazing animals.

This AnimalWised article contains 20 interesting facts about penguins that you probably did not know.

We tend to associate birds with their ability to fly, but that is not true of all of them. Penguins belong to the small group of flightless birds. During evolution, penguins lost the ability to fly to improve their swimming efficiency because fins were incompatible with flying.

About 30 million years ago, the ancestors of these flightless birds began hunting underwater, which started an evolutionary process that led to the atrophy of wing joints, which eventually became fins. Combined with the rearrangement of the legs, this change gave the penguin an efficient swimming body shape. According to some animal experts, the penguin is even one of the slimmest animals in the world.

Learn more about other birds that can not fly by reading this other article about flightless birds.

Penguins are masters of camouflage

The black and white "tuxedo" worn by most penguin species is a clever camouflage called countershading.

Penguins do not have sexual dimorphism

Another fun fact about penguins is that there are no significant differences between males and females, which is called sexual dimorphism. However, they can be distinguished by their size, as the male is usually slightly larger than the female.

Another way to differentiate males from females is the sex-specific syllable pattern. It is a complex method, but it helps to sex these birds more accurately.

Continue reading this other article to learn more about where the penguins live.

One of the most striking characteristics of penguins is that they are monogamous animals. This means that male and female pairs mate exclusively with each other. In many cases, males and females mate with the same partner for most of their lives. Penguins can only mate when they are 3 to 8 years old.

Scientists believe that the monogamous behavior of penguins is due to the fact that the newborns need the warmth of a father and a mother for a long period of time due to the extreme conditions in which they have to raise their chicks. In other words, social monogamy is sometimes a requirement for survival, and raising chicks requires good coordination between the pair. If the couple is not successful, that year's rearing could be a failure.

However, penguins can separate from their partners. About 26% of separations are due to a desire to change mates. And if a male that was attached to his mate does not return to the breeding area of the colony, the female may mate with another male.

As parents, penguins share the responsibility of protecting and feeding their chicks and incubating the eggs. After laying one or two eggs, depending on the species, both parents take turns holding the eggs between their feet to keep them warm, as if they were a nest.

In some species, such as the emperor penguin (Aptenodytes forsteri), the female lays a single egg, which is incubated by the male during the long Antarctic winter. The incubation period lasts an average of 65 days. During this time, the male penguins must balance an egg on their feet for weeks without food at temperatures as low as minus 40 degrees Celsius. The female uses this time to replenish her food reserves on the open sea. Upon their return, the penguin parents take turns foraging for food at sea and caring for the chick in the colony.

Penguins have an International Penguin Day

Of the 18 species of penguins that exist, 13 are in a category of endangered or in danger of extinction, according to the International Union for Conservation of Nature (IUCN). With this in mind, some strategies have been developed to promote their conservation. One of them is to declare April 25 of each year as International Penguin Day, but also January 20 as Penguin Awareness Day.

Both days are intended to make society aware of the importance of taking care of the environment in order to preserve the different species of penguins. They are also intended to call on governments and institutions to develop action plans to protect the penguins.

Another characteristic of penguins is that they are very social birds. Penguins congregate in colonies, some of which are huge and can number 20 million penguins (or more) at various times of the year. Even at sea, they often swim and feed in groups.

The behavior of penguins in colonies varies depending on the time of year. During the breeding season, they become more active and boisterous. Not only courtship rituals and pair bonding can be observed, but also agonistic behavior due to territoriality and competition for resources.

During the rest of the year they are much quieter, with periods of submersion in search of food, migration in some species, and social grooming, the latter being considered a behavior that strengthens bonds between these birds.

Another curiosity about penguins is that they are carnivores, that is, they eat only meat. Their diet includes small crustaceans (krill, similar to a shrimp), squid and fish. Exactly what food the different species of penguins eat depends on their size, habitat, and the shape of their beak.

All species of penguins have evolved special glands for excreting the excess salt they ingest by swallowing seawater when opening their mouths to catch food.

Continue reading this other article to learn more about penguin diet.

Penguins have evolved to hunt under water

The adaptations of penguins as swimming birds include not only modifications to their wings and legs that favor swimming, but also the increased density of their plumage during evolution. The dense plumage prevents water from entering and traps air in the soft under layer of down. Once released, the air envelops the bird in a lubricating layer of air bubbles. Such adaptation has allowed penguins to be practically impermeable to water.

Thanks to some changes in their hemoglobin, their blood has evolved to store larger amounts of oxygen than that of other birds, allowing them to dive for several minutes. In addition, their heart rate is lower, which optimizes their functions and oxygen consumption underwater.

Most birds have hollow, air-filled bones to keep them light for flight. Penguins have adapted with solid bones instead. This helps them swim because solid bones reduce buoyancy.

Finally, penguins' eyes have evolved and function even better underwater than outside. This allows them to see their prey better when hunting, even if the water is dark or murky.

You probably already know that penguins are excellent swimmers that can reach amazing speeds. When swimming, penguins jump in shallow arcs over the surface of the water, covering their feathers with tiny bubbles that reduce friction. This also helps them avoid predators and allows them to breathe more regularly. Some scientists suggest that they may also make these leaps for sheer pleasure.

The average speed of penguins in the water is usually between 4 and 10 kilometers per hour. However, there are sections where they can double and triple their speed by blowing out the air trapped between their feathers in the form of bubbles.

The gentoo penguin (Pygoscelis papua) is the one that swims the fastest. It is of medium size and can reach speeds of over 30 km/h. Finally, some species, such as the emperor penguin (Aptenodytes forsteri) can dive up to 500 meters deep and stay underwater for 20 minutes without gasping for air.

If you want to read similar articles to Fun Facts about Penguins, we recommend you visit our Facts about the animal kingdom category. 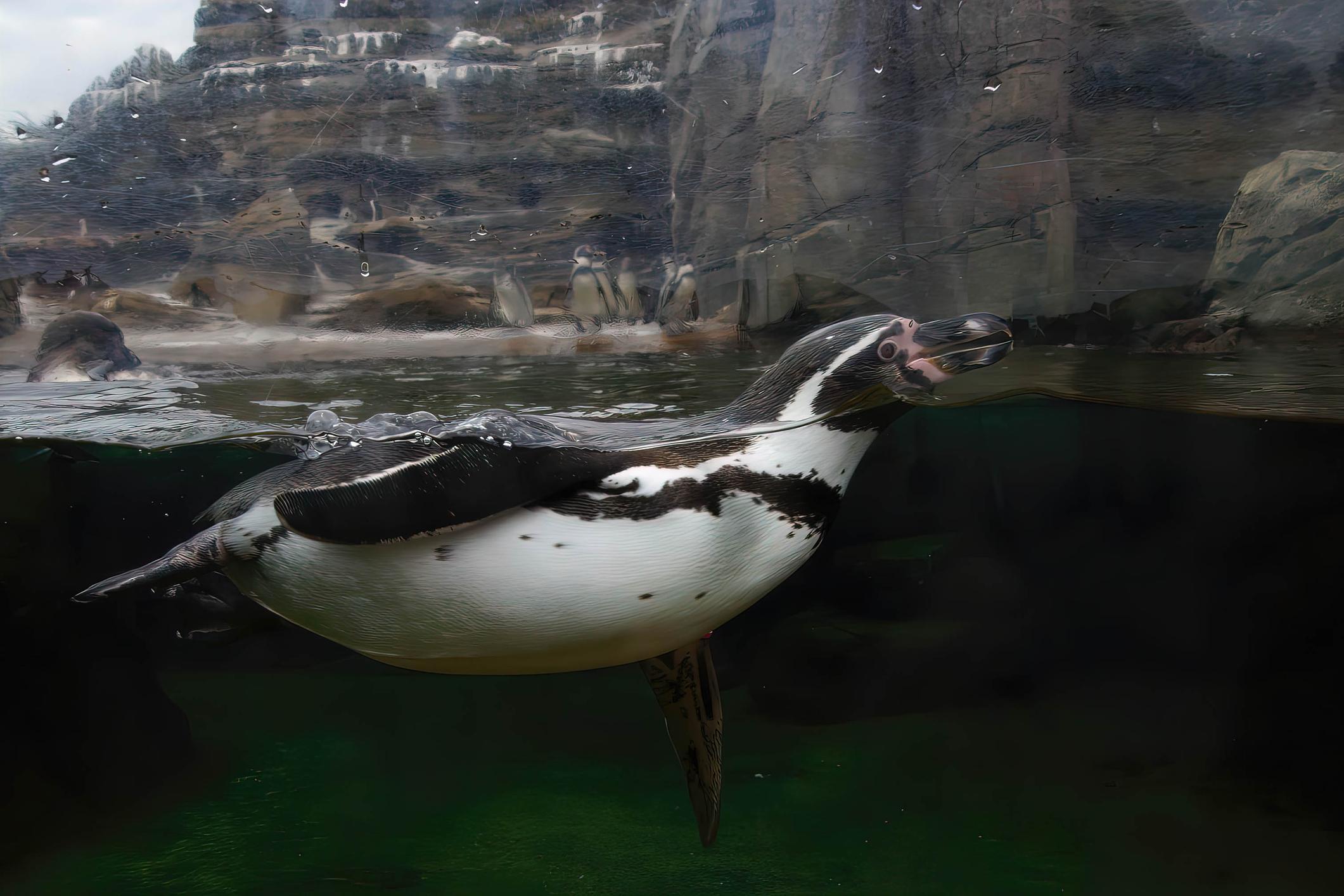 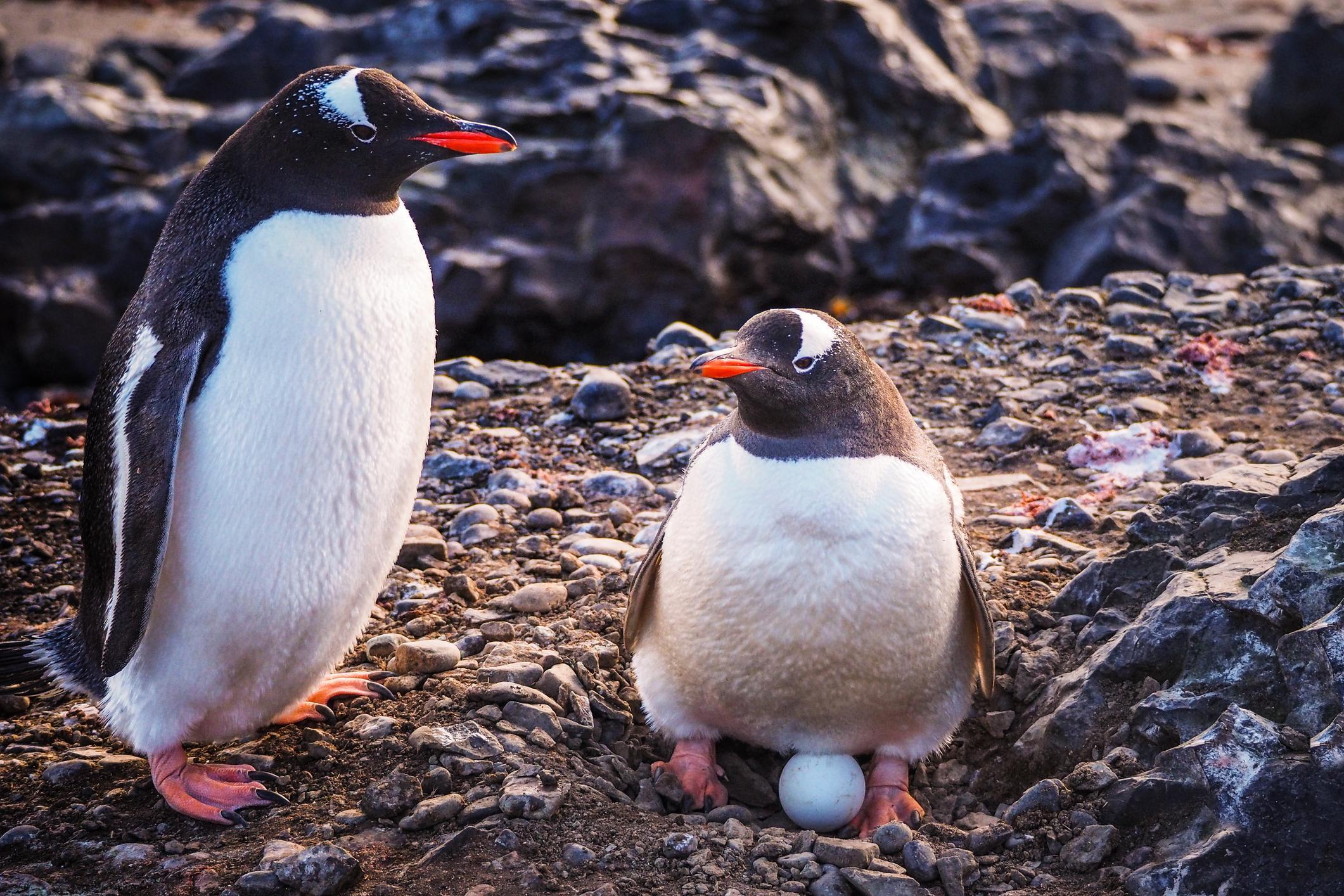 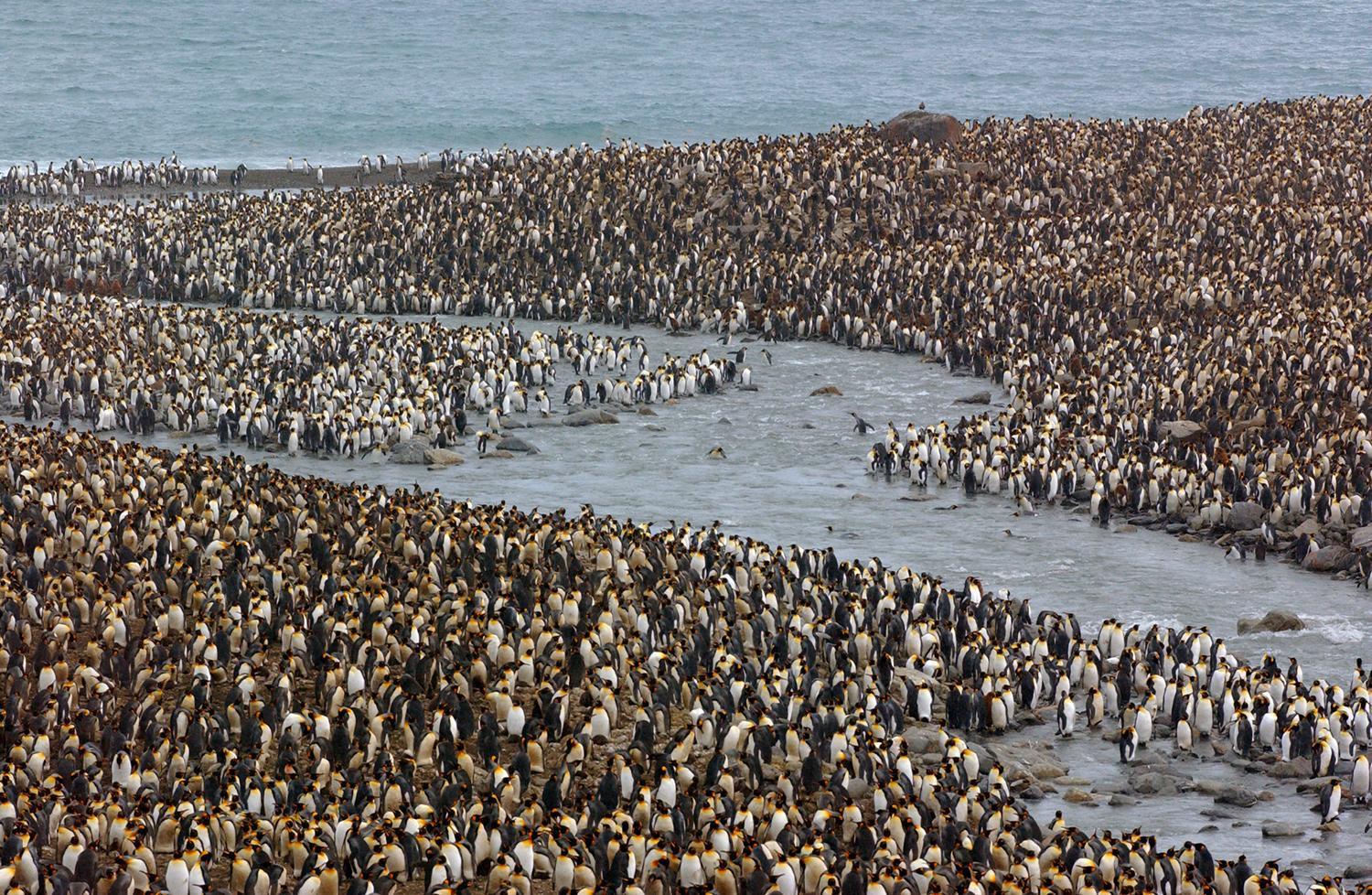 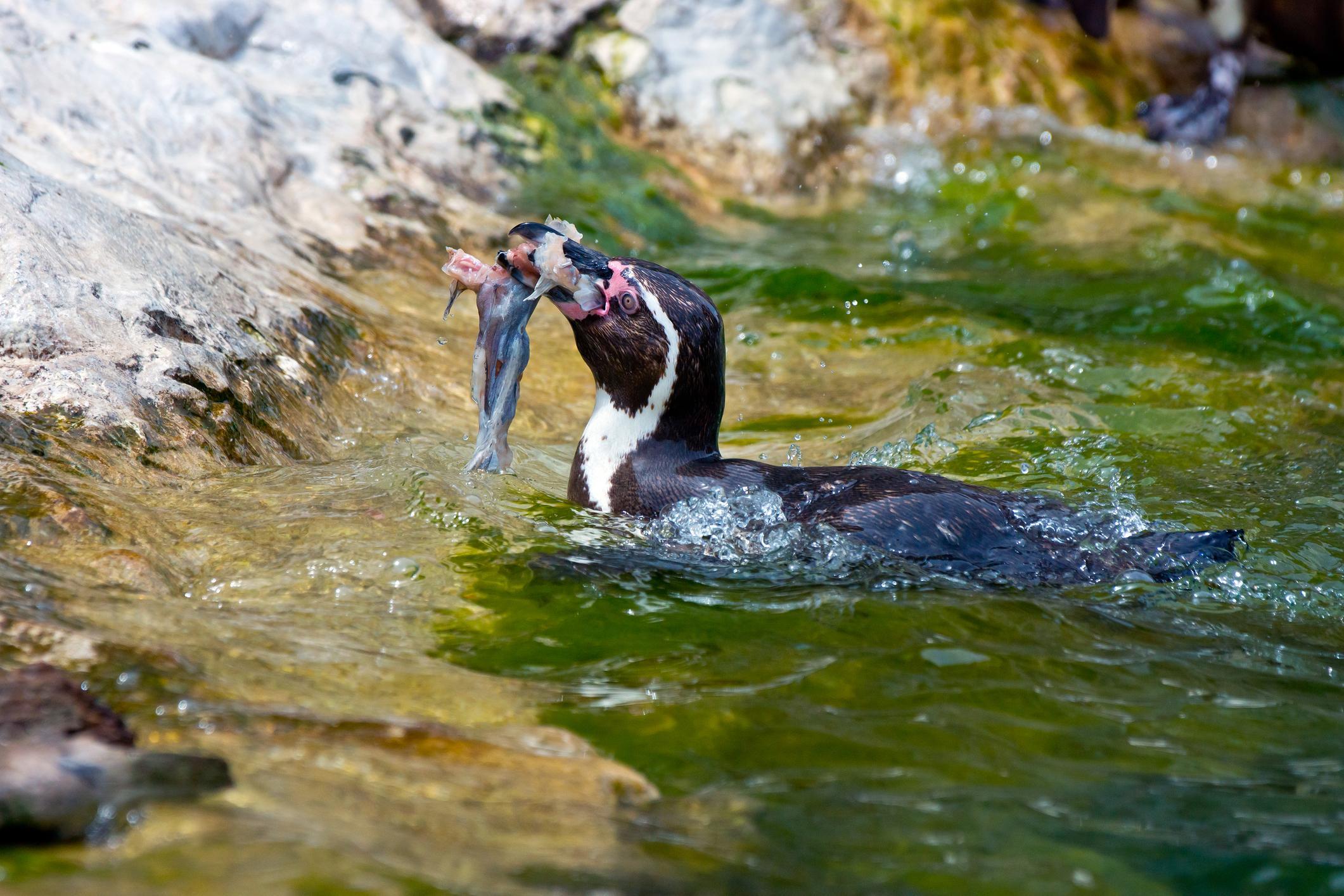 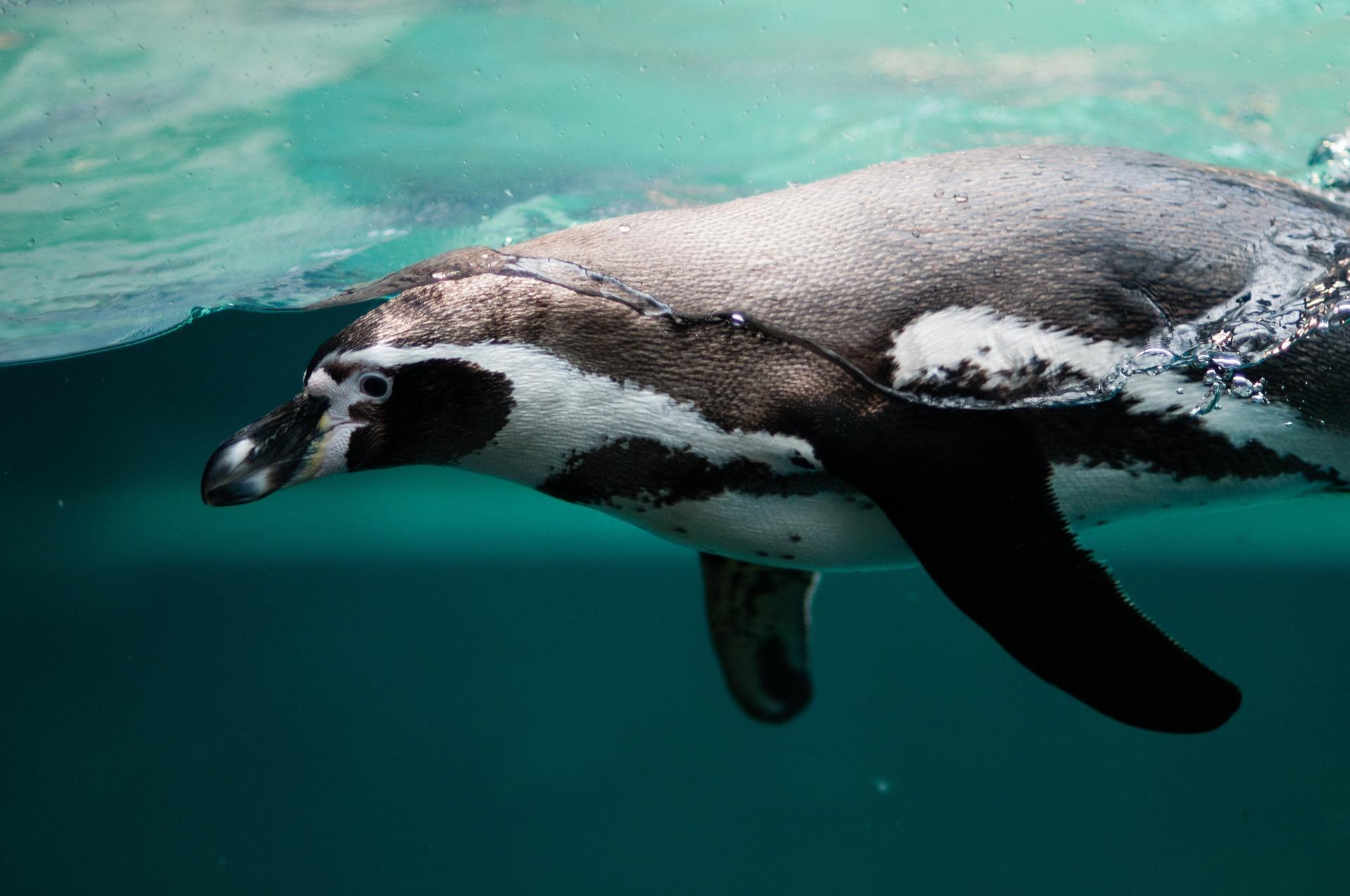 1 of 6
Fun Facts about Penguins
Back to top