By Nick A. Romero, Biologist and environmental educator. November 6, 2022

In the following AnimalWised article, you'll find 10 fun facts about seahorses that you probably did not know.

You may also be interested in: Fun Facts about Penguins
Contents

There is more than one species

Contrary to what most think, there is more than one seahorse. In fact, there are 47 species, 14 of which have been discovered in the last decade.

The seahorse is classified in the class Actinopterygii, the same class that includes other well-known species such as the swordfish and salmon. However, all 47 species of seahorses belong to the same genus, Hippocampus.

They are carnivorous fish

Although it may not appear so at first glance, seahorses are a group of marine fish. They are also referred to as hippocampus. This term comes from the combination of two classical Greek words: "hippos," which means horse, and "kampos," which means sea monster.

Although it may not seem like it, these adorable creatures are carnivores. They feed mainly on shrimp, small crustaceans, some invertebrates, and some fish larvae.

They have no teeth and stomach

Seahorses have no teeth and no stomach. To survive and grow, they must eat food almost continuously because it passes through their digestive tract so quickly. On a normal day, they can feed up to 50 or 60 times a day. Furthermore, a single seahorse can eat up to 3000 brine shrimp per day.

Although seahorses are technically fish, they are very inefficient swimmers. In fact, they can barely cover a distance of 2 meters in an hour.

This is due to their vertical posture and lack of a tail fin. However, they are able to flap their dorsal fins about 35 times per second. Although they are slow, they are still very efficient predators. We will discuss how seahorses hunt in the following sections.

Camouflage is very important for seahorses because they do not move around much. They usually stay anchored to algae or coral to avoid strong currents. In fact, storms are one of the main causes of death for this species.

You may be interested in this other article, where we tell you who are the fastest animals in the ocean.

They have no rear fin

They are an example of the exuberance of evolution

Recent studies have sequenced the complete genome of the seahorse and its evolution. Seahorses have been shown to have lost several genes that are present in many fish and contribute to the development of teeth and pelvic fins. However, other genes have been duplicated.

When a gene is duplicated, the copy can serve an entirely new function. In the seahorse, it is likely that part of the newly created gene enables male pregnancy, which we will discuss later.

You may be interested in this other article, where we talk about the origin and evolution of animals.

They greet each other every morning

Most wild seahorses are monogamous and some species mate for life. Mating can be difficult and risky because seahorses are poor swimmers and rely on camouflage to hide from predators. However, when they do find each other, they form one of the most special and unusual bonds in the animal kingdom.

Once the pair finds each other, the male and female seahorses come together repeatedly each morning to dance together and strengthen their bond for the rest of their lives. Not only that, but they change color as they move together, sometimes with their tails intertwined.

If you liked how romantic seahorses can be, you might be interested in this other article, where we talk about the 10 animals that are most loyal to their partners.

They have defied traditional gender roles

Male seahorses experience pregnancy in a unique reversal of reproductive roles. During mating, the female uses a tube called an "ovipositor" to lay her eggs in the male's "brood pouch".

The male then incubates the young, nurtures them and carries them to term, usually in two to four weeks. With vigorous contractions, the male gives birth to fully developed young, dozens to over a thousand depending on the species. Newly hatched, floating seahorses are immediately vulnerable to predation, and few survive the first few days.

They are ferocious predators

Seahorses may seem slow and delicate, but in reality they are ferocious and resourceful predators. In fact, the seahorse is one of the slowest swimming fish known to man, but it is capable of catching prey that swims at incredible speeds.

These beautiful creatures are not known for their swimming skills, but possess a secret weapon that allows them to sneak up on their prey. Seahorses use a method known as pivot feeding to eat. Their long necks function like a spring, allowing them to quickly turn their heads and suck in their prey. Until now, how these docile-looking creatures manage to approach their prey unnoticed has been a mystery.

Recent studies have shown that seahorses can do this thanks to their special snout, which is shaped to create few ripples in the water. This allows them to glide by unnoticed and pounce on small crustaceans.

They are masters of disguise

As mentioned earlier, seahorses are not good swimmers and therefore rely on their ability to camouflage themselves to stay safe from predators.

Certain species of seahorses are extremely difficult to distinguish from the corals they inhabit because of their ability to camouflage themselves perfectly. The species Hippocampus bargibanti, also known as the Bargibant seahorse or Pygmy seahorse, is considered to be the king of camouflage by many. Their bodies are almost completely covered with pigmented bumps that imitate the polyps of the gorgonians of the genus Muricella, on which it lives its entire life.

This not only helps them avoid predators, but also allows them to hide from their potential prey, which they catch as they approach, unaware that their predator is pursuing them. We dare you to find the seahorse in the picture below.

You may also be interested in this other article, where we have listed 20 animals that change color with photos.

If you want to read similar articles to Fun Facts About Seahorses, we recommend you visit our Facts about the animal kingdom category. 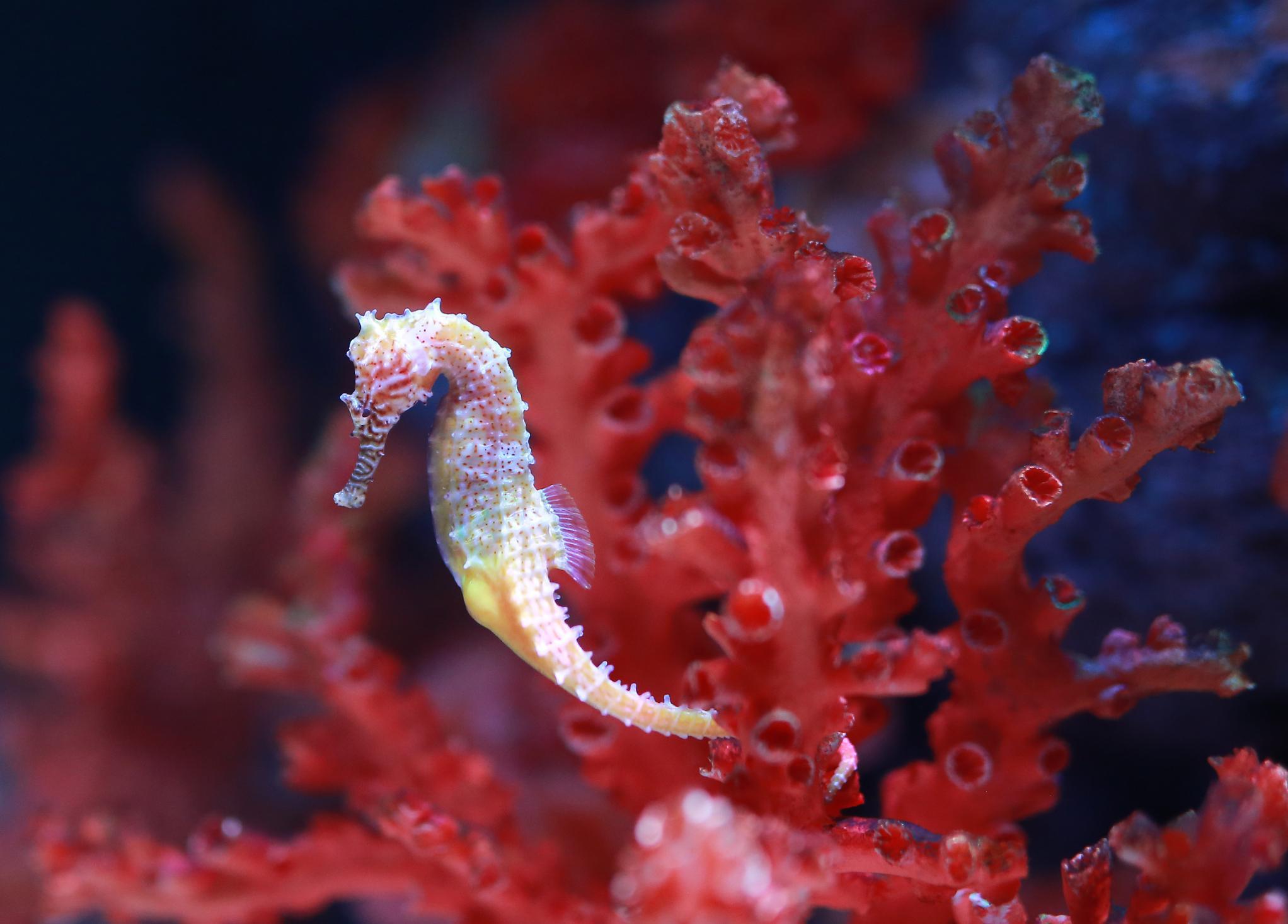 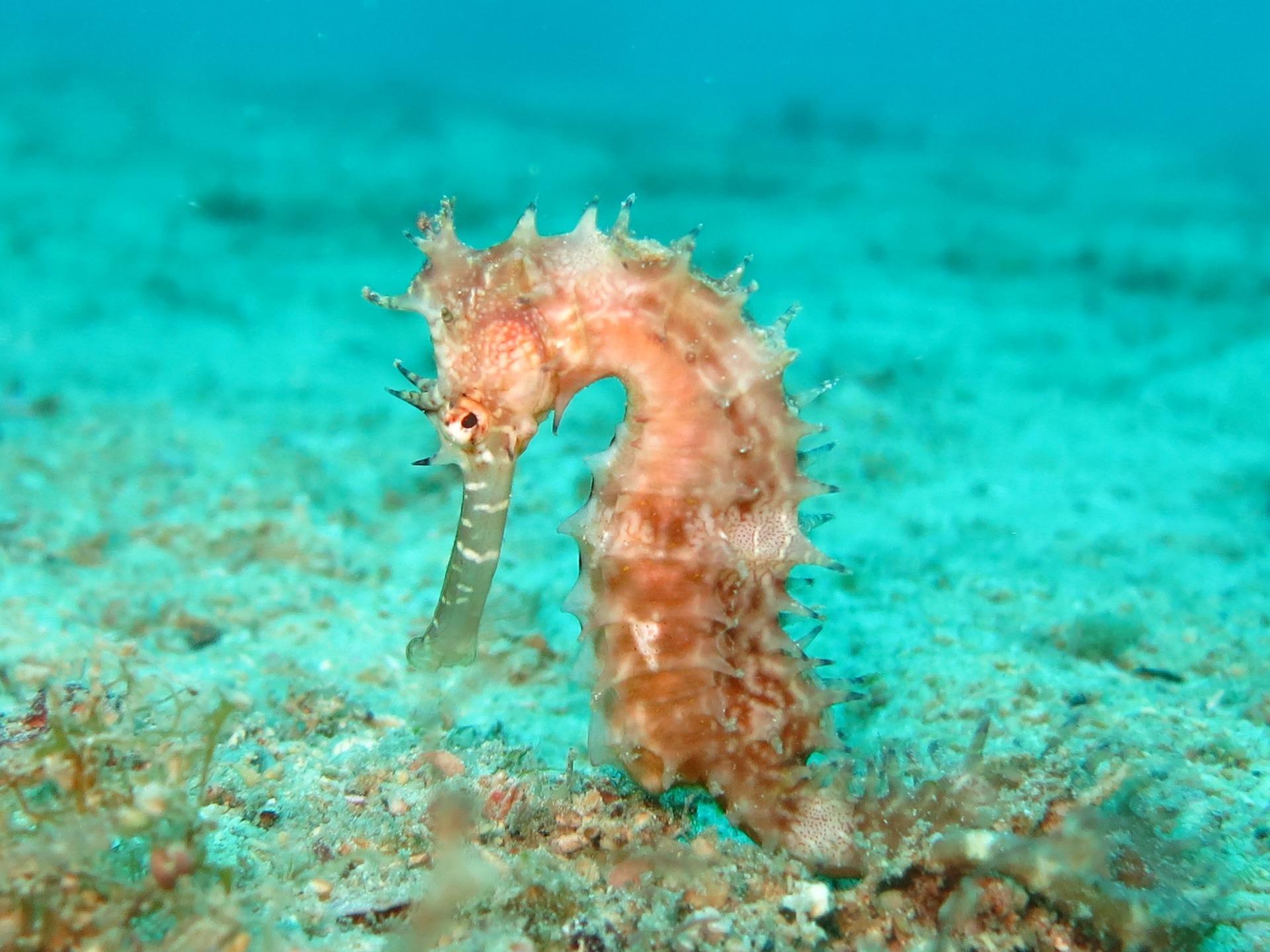 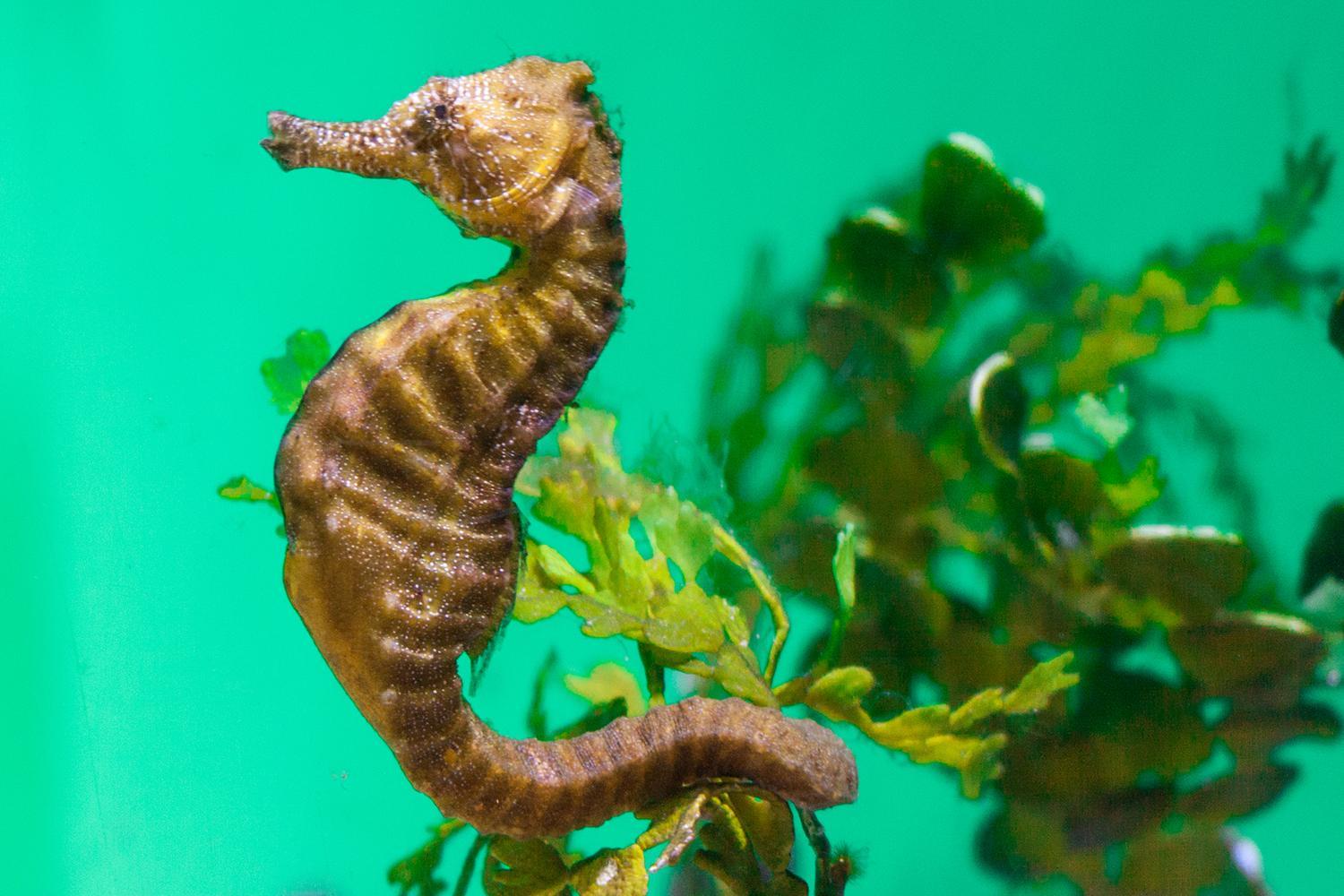 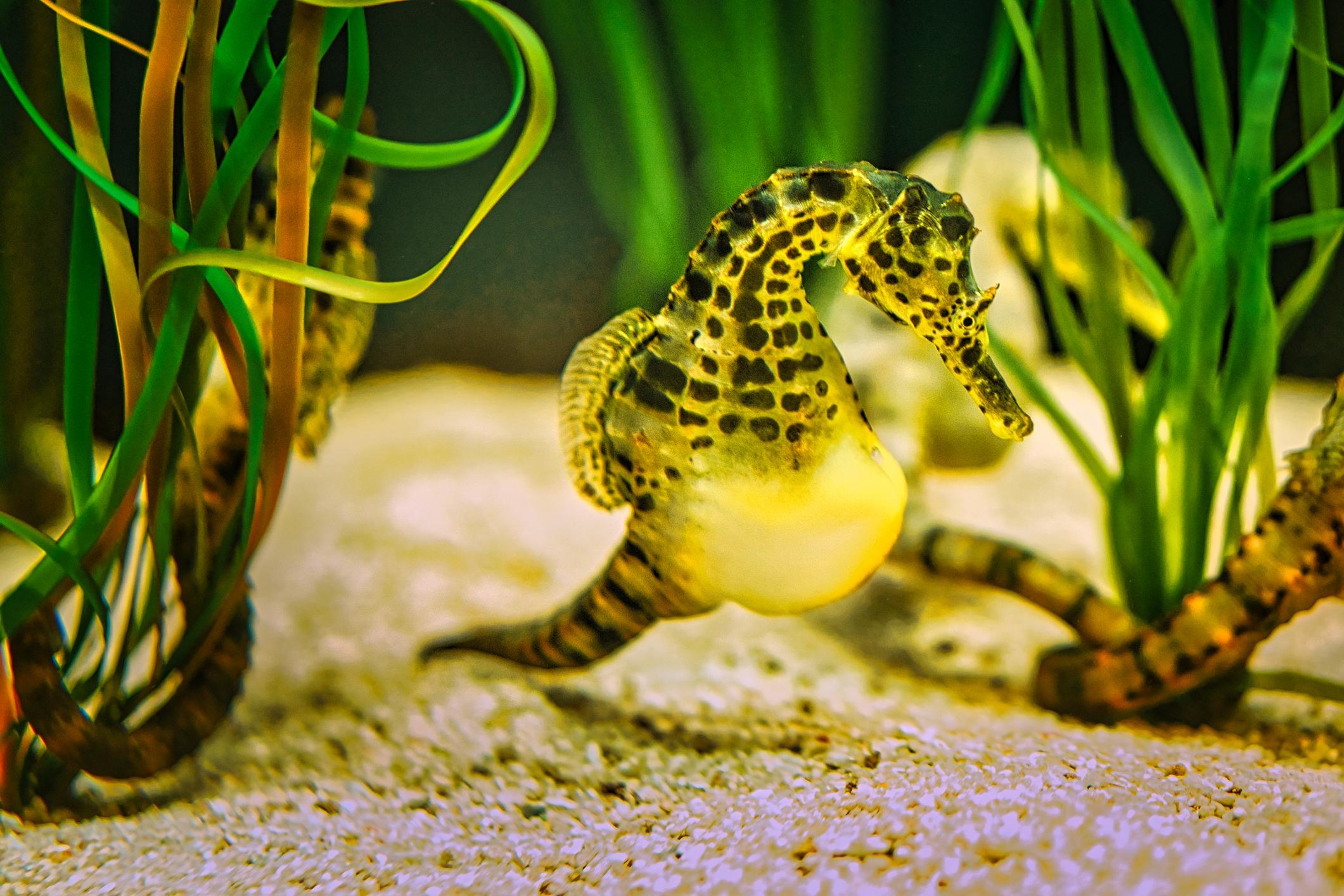 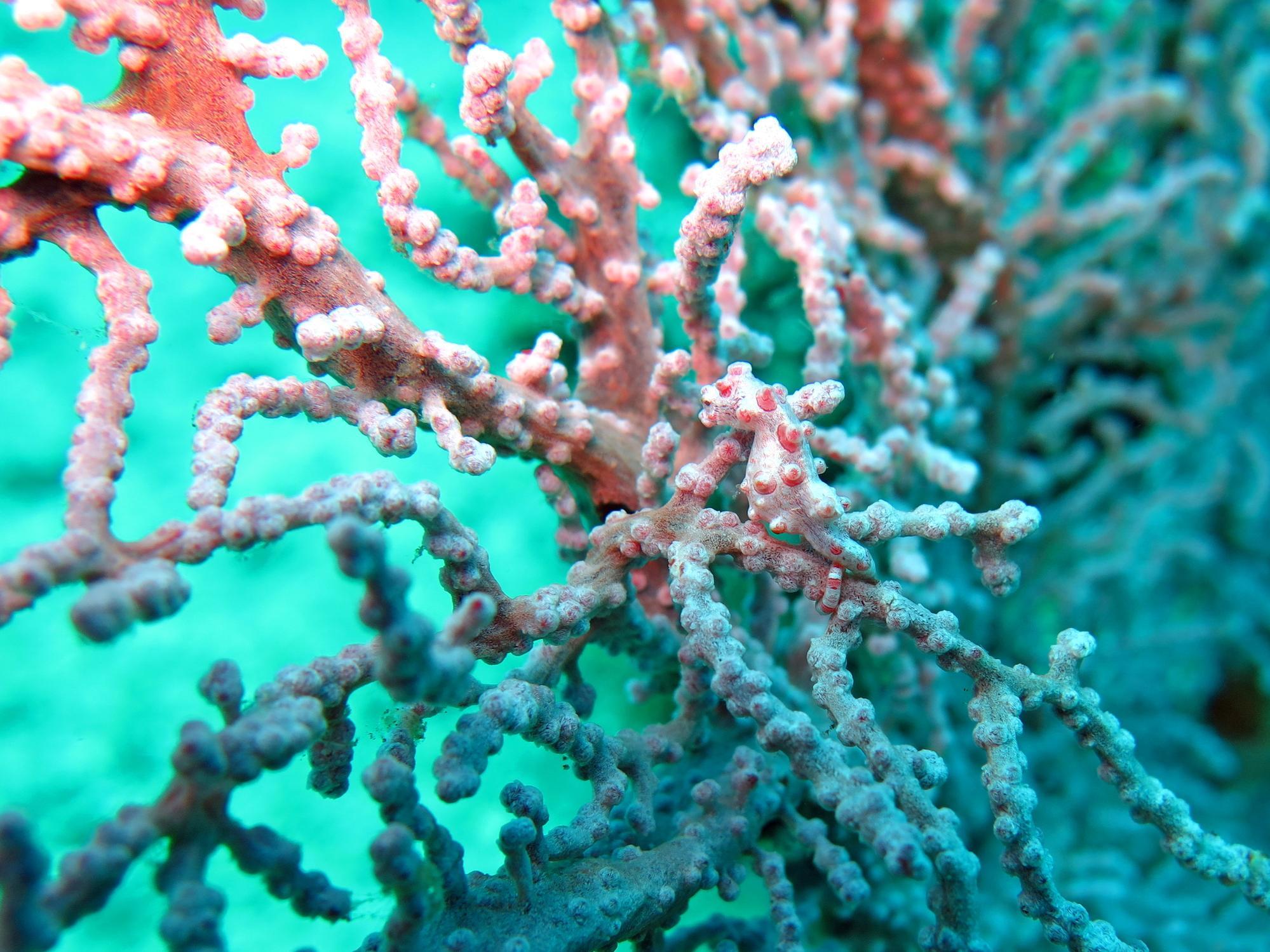 1 of 5
Fun Facts About Seahorses
Back to top