By Nick A. Romero, Biologist and environmental educator. May 19, 2022

Diversity refers to the vast variety of species which live in the animal kingdom. They are grouped according to various characteristics, some of which are more alike than others. Diet is one of the categories into which animals of various types and species are grouped. These groups are more diverse than simply carnivores and herbivores. Granivorous animals are a group which encompasses a wide range of animal species.

At AnimalWised, discover more about granivores. Find out the different types of seed eating animals, see photos of what they look like and learn more about what a granivore is.

You may also be interested in: Frugivorous Animals - Animals That Eat Fruit
Contents

Granivorous animals are those which base their diet on seeds and grain, either mainly or exclusively. Seed eating animals have an organism which is designed to be sustained based on the nutrition provided by seeds and grains. Without these foods, they would not be able to carry out basic functions and will die as a result. Although some carnivores may also eat seeds, we cannot say they are granivores since meat is their main form of sustenance.

However, we can classify granivores into two loose types:

Impact of granivorous animals on the ecosystem

It is important to mention that seed-based feeding establishes a plant/animal interaction which is of great ecological and evolutionary importance. In terms of ecology, this impact differs according to how seeds are eaten. Some will eat them directly from the plant, others will pick them up from the ground after they have fallen. Generally, seeds that are eaten directly from the plant are more likely to be eaten than those that are dispersed.

Seed predation is based on two different types:

How this affects the ecosystems is not always specifically known. Some plants will have evolved to compensate for the large number of seed predators in their habitat, so they have enough seeds to best assure reproduction. Others may struggle, especially when populations of granivores increase. Some seed predators will even eat seeds as they are shooting, interrupting the germination process as they do so.

As the seeds are eaten by an animal, the reproductive process of the plant is interrupted. Certain studies have suggested that this process is necessary to limit certain prolific plants, acting as excellent biological controllers[1]. However, some seeds are eaten by animals which are then excreted in their stool. They may be sufficiently intact to allow growth of a new plant somewhere else in the habitat. This makes them vectors for pollination.

While we may not know the exact impact of specific seed predation in an ecosystem, there are generalities we can discern. One of the most important factors is that ecosystems are in a delicate balance and even apparently small changes can have disastrous repercussions.

What do granivorous animals eat?

As we have mentioned, granivorous animals eat the seeds of plants. The plant species on our planet are incredibly diverse, with new species being discovered all the time. Some examples of seeds that are consumed by the various species considered to be granivores are:

Depending on the type of food, animals have particular adaptations to be able to consume their diet. The mouth, teeth, digestive system and even the ability to remove food are adapted in specific ways. However, not all granivorous animals can consume seeds in the same way. For example, some need them to begin to mature and even produce seedlings before they can ingest them. Others are specialized to consume them in any state.

Regarding the adaptations of seed predators, the mouth is one of the most important anatomical structures. Many birds have a strong beak which is able to break into otherwise very hard seed casings. Many rodents have strong incisor teeth which are able to break into seed casings and extract the softer digestible material. These incisors also grow continuously, meaning they can continue to eat seeds if they break part of it off.

Some insects, such as certain ant species, even have very strong jaws which are capable of breaking into some seeds and grains. This is not the only anatomical feature which can help consume seeds. For example, squirrels have the ability to store a lot of seeds in their cheeks for transport and later consumption.

Depending on the group of animals, there are certain adaptations in the digestive system for the consumption of seeds. An example is the gizzard in birds. Although it lacks teeth to grind food, this structure is different from a true stomach. It has specialized tissues and uses small rocks consumed by the animal (gastroliths) to grind food. It is also important to mention that in birds that do not consume seeds as the main source of food, this adaptation also plays a fundamental role.

Certain rodents have a digestive system divided into two chambers, as well as a moderately complex large intestine. These structures also contain bacteria which allows them to eat a diet mainly based on seeds or grains and extract from these the nutrients necessary for their subsistence.

As we have seen throughout the article, different groups of animals contain granivores. However insects, birds and mammals are the most common. Here we provide examples of different types of carnivores as well as the seeds and grains they consume:

If you want to read similar articles to Granivores - Types of Seed Eating Animals, we recommend you visit our Facts about the animal kingdom category.

References
Bibliography
Herbivorous Birds - List of Herbivore Birds
Commensalism in Biology - Definition of Commensalism
Types of Animal Reproduction
Types of Adaptations in Animals
Related categories
Endangered animals
Most read
1.
What Animal am I According to my Zodiac Sign?
2.
What Does It Mean When a Cat Shows Up at My Door
3.
10 Most Beautiful Animals in the World
4.
Why do Dogs Get Stuck when Mating?
5.
Animals With Scales - Full List
6.
Examples of Vertebrate and Invertebrate Animals
7.
Differences Between Deer, Elk, Moose and Reindeer
8.
Can Cats Absorb Negative Energy?
Types of Spider Monkeys
Ruminant Animals: Full List and Fun Facts
Types of Animals with Gills
Types of Ants - Characteristics and Photos
Examples of Vertebrate and Invertebrate Animals
Why Do Ants Carry Dead Insects?
Herbivorous Animals: Examples and Fun Facts
Native Animals of the Himalayas 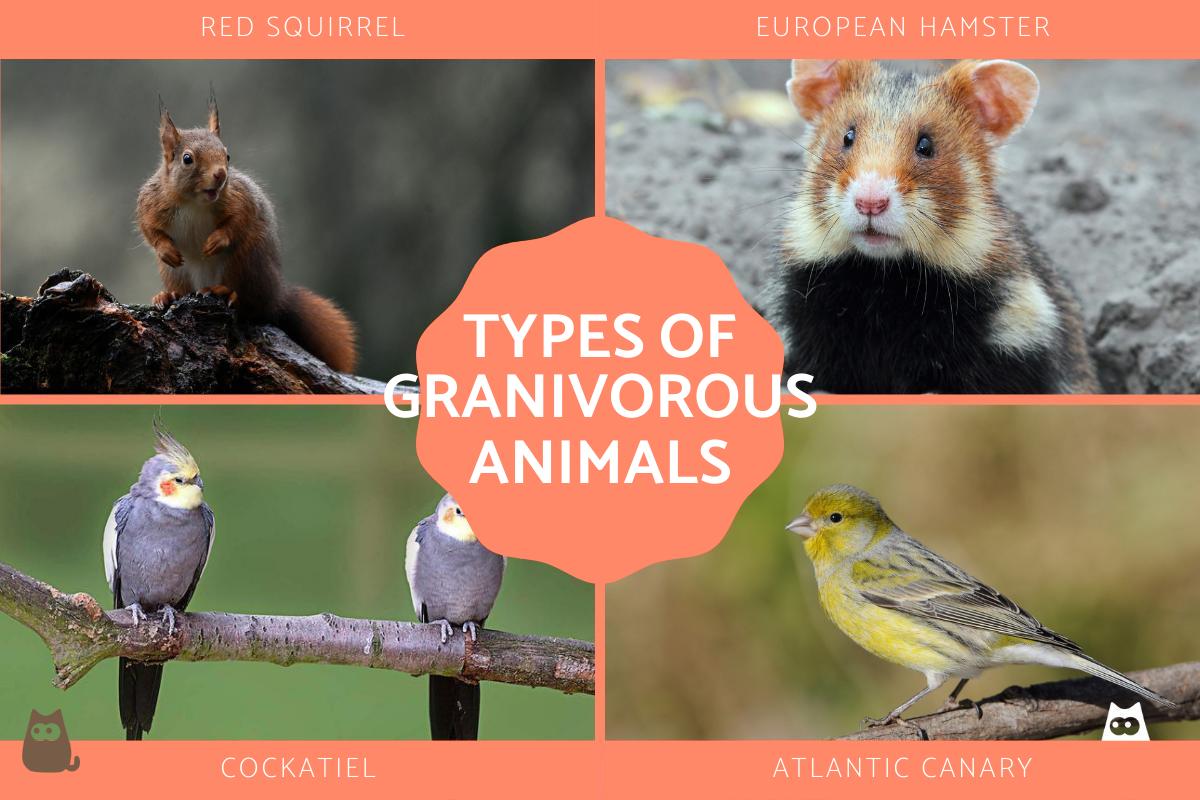 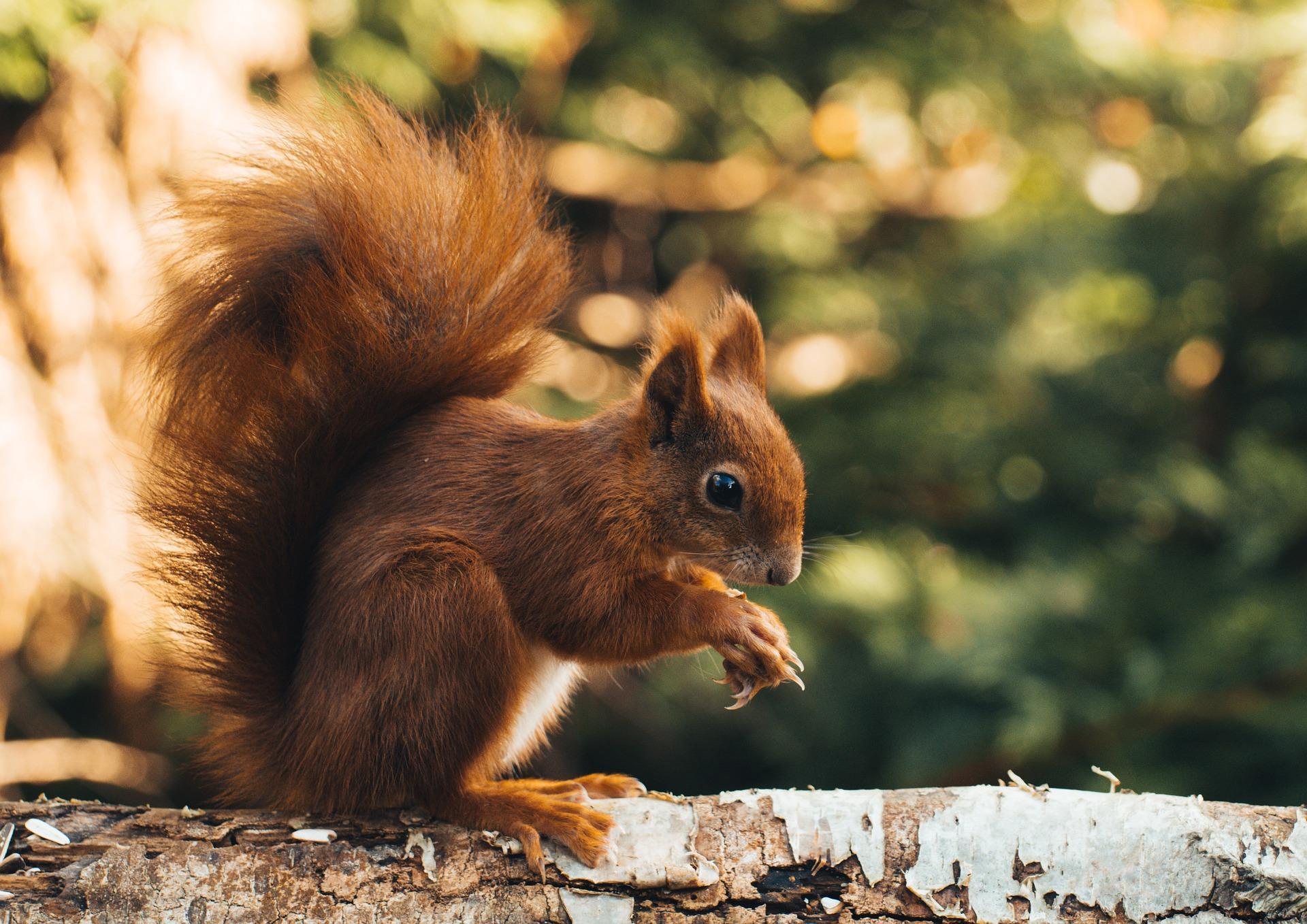 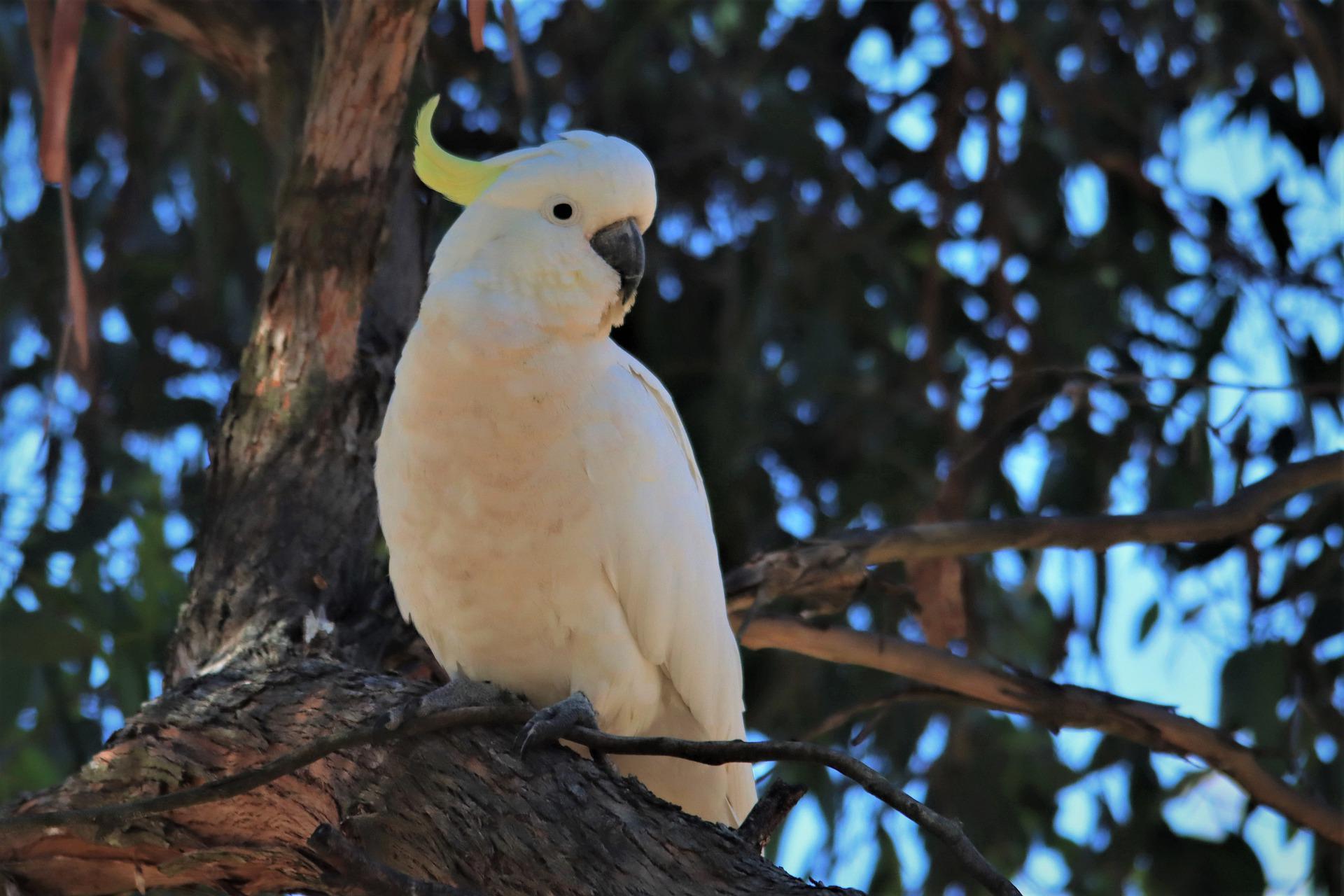 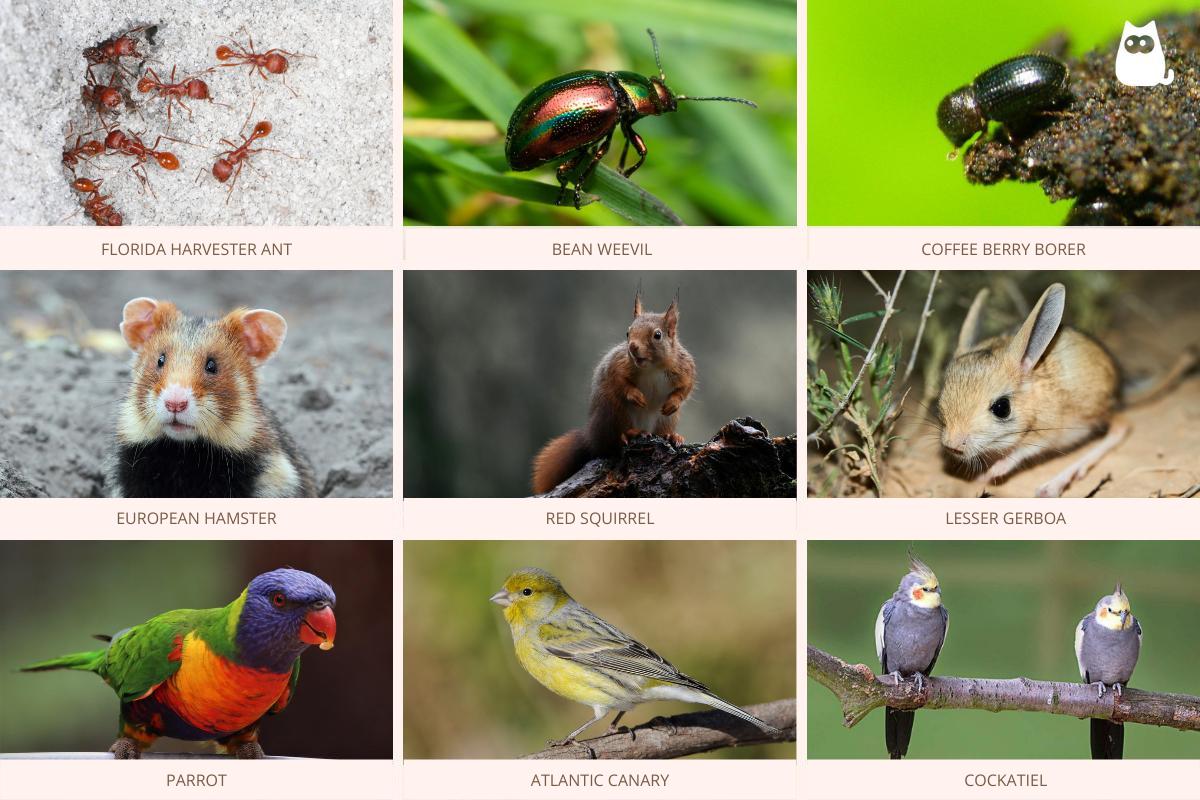