By Nick A. Romero, Biologist and environmental educator. October 2, 2022

Bees do not just make honey. They do something essential for the diversity of plants in the world: pollination. They are responsible for pollinating plants near their hives so that other pollinators, such as birds, bats or other species, can transport the pollen they collect from these flowers to fertilize the plants. Although some bee populations are more resistant to disease than others, all are susceptible to certain infectious diseases caused by viruses, bacteria, and parasites.

The following AnimalWised article explains and describes the 20 most common bee diseases.

You may also be interested in: Most Common Guinea Pig Diseases
Contents

It is caused by a microscopic mite, Acarapis woodi, also called tracheal mite. It is an internal parasite of the respiratory system of adult bees that feeds on hemolymph. Acarapisosis has been reported in North America, South America, Europe, and the Middle East.

Mortality rates vary, but massive infestations cause high mortality. It is transmitted to bees by direct contact, and newly hatched bees are particularly susceptible.

Acarapisosis affects adult bees in the colony and parasitizes the queen, workers, and drones. Age plays an important role in susceptibility to mites. Bees are free of this parasite when they are born, but they are most susceptible because when they come into contact with old infested bees, they can be infested up to 90 percent of the time.

Continue reading this other article to learn why bees sting.

This disease is caused by a mite, which is an external parasite of adult bees and their brood. There are four types of Varroa mites, but Varroa destructor is the most important. Varroa destructor is a mite closely related to spiders and ticks that live as an external parasite on bees by feeding on their hemolymph. It is found worldwide, except in Australia and the South Island of New Zealand.

It is known to transmit a virus that causes wing deformity. Adult bees infected with varroosis also have shorter hindparts. The first signs of infection usually go unnoticed. Only when the infection is massive, they become visible and adult mites can be observed on the bees.

The infection is spread by direct contact from adult bee to adult bee and by movement of infested bees and infested brood. Varroa mites can be present in a colony without having any noticeable effects, but they can cause a sudden collapse, especially in late summer and fall. In a bee colony, a small number of mites usually does not cause significant damage, but above a certain number (more than 3 or 5 mites per 100 bees) it can affect the survival of the colony.

Tropilaelapsosis is an external parasitosis caused by mites of the genus Tropilaelaps that infest bee brood. They feed on larvae and nymphs and cause malformations, mortality and gradual decline of the bee colony.

The disease develops within about a week, and the mites can be found on the bee brood and adult bees. It is a very harmful disease, which, if left untreated, causes serious damage to the bee colony.

If you want to learn even more about bees, do not miss the following article, where we explain how bees communicate.

American foulbrood (AFB) is a bacterial disease, Paenibacillus larvae, that is transmitted to young larvae by feeding on adult bees. It is very virulent, highly contagious and its spores, which can remain active for more than 30 years, are present in 80% of hives. If not properly diagnosed, it can destroy entire hives.

The brood that dies under the operculum becomes a "gummy" mass of brownish bacteria and begins to emit an unpleasant odor in the affected area. After some time, the rotting larva dries up and remains stuck to the underside of the cell as a blackish crust.

This disease is caused by poor nutrition, inclement weather and depopulation. Even when the bacteria are controlled with antibiotics, the spores are resistant and highly contagious, so the only effective form of control is to burn the hive and everything that has come in contact with it. This disease is widespread throughout the world.

European foulbrood is a bacterial disease that affects bee brood. The genetic resistance of some bee species to this disease may allow, especially under favorable environmental conditions, to overcome the infection without serious damage. However, it should be noted that European foulbrood, although characterized by a better prognosis than American foulbrood, has a more vicious expression in some areas and seriously damages even very strong bee colonies.

The bacterium develops in the hive at the brood level. The disease is spread orally in the hive by nurse bees that become contaminated with the spores while trying to clean the cells of dead larvae and transmit them to the brood when they feed them. The disease can be transmitted from hive to hive or from apiary to apiary.

While the disease can occur year-round, it is more common in the spring when there is more brood and can be spread through honey with infected combs (via pollen, honey, brood, etc.). It seems to be more common in cold, rainy springs when there is a shortage of food, especially protein for brood (pollen shortage).

Healthy and strong bee colonies are able to recover from the disease by themselves, if the season guarantees sufficient food sources (pollen, nectar, and flowers).

Amoebiasis or amebiasis is a parasitosis of the Malpighian tubules of adult bees caused by the protozoan Malpighamoeba mellificae. The disease is widespread in Europe, Oceania, and the Americas. Amoebic disease occurs almost exclusively in worker bees, as it is very difficult for the queen and drones to become infected.

The symptoms are similar to those of nosemosis, there is a high mortality of the bees and consequently depopulation of the hive. Bees can be observed crawling out of the hive without being able to fly. As intestinal inflammation occurs, the abdomen is swollen, there is diarrhea and yellowish watery feces found in the combs. There is no known effective drug treatment for amebiasis.

If you want to learn more about the fascinating world of bees, do not miss this other article where we talk about what honeybees eat.

The fungus mainly affects larvae, but also pupae of bees. The two main routes of infection are the digestive tract through the consumption of food contaminated with fungal spores or the cuticle of the offspring through the germ tube emerging from the spores.

In both forms of infection, mycelia are formed that penetrate the body of the larvae, causing their death and giving them the characteristic of mummies. Depending on whether sexual reproduction has occurred or not, the larvae become white, grayish or black.

Chronic Bee Paralysis Virus (CBPV) is an infectious and contagious disease of adult bees caused by a virus. The infection has no seasonal pattern, often remains latent, and is common in many countries.

Affected bees become almost hairless, dark in appearance, and suffer bite attacks from healthy bees in their colony. They become unstable and unable to fly, crawling on the ground and on grass, where they die within a few days after symptoms appear.

The virus is transmitted to larvae by royal jelly and by bees cleaning infected cells from dead larvae. Recently, it has been demonstrated that the virus is also transmitted from the queen to the brood.

Nosemosis is a disease that affects the digestive tract of all adult bee colonies (queen, workers, and drones) and is caused by a protozoan called Nosema apis Z.

The digestive tract is damaged so that the ingested food is not properly utilized. As a result, there is a general slow weakening of the hive, which manifests itself in a decrease in vitality, average life span, movements, and response to stimuli of the affected individuals.

It is a common disease worldwide, although it is only of economic importance in countries with temperate climates, as it mainly affects the production capacity and survival of bee colonies in winter.

The spores of Nosema apis enter the bees' organism through ingestion of honey, pollen, contaminated water or contact with feces. The infected queen suffers atrophy of the ovaries because the ova degenerate, resulting in complete sterility. The bees become weak, suffer paralysis and have no strength to move their wings or fly.

Aethinosis or ethinosis is a disease of beehives caused by the small hive beetle (nitidulid coleoptera Aethina tumida), whose larvae feed on honey, pollen and eggs, forming tunnels in the combs and destroying them.

The small hive beetle is a pest that attacks weak hives, carrying out its life cycle in their combs, which destroys them, and can wipe out the colony if it is not able to defend itself. It can also attack combs stored with honey, destroying them as well.

The females of this beetle come to the hives attracted by the smell. They invade the hives and if they are spared from the cleaning instinct of the bees, they lay their eggs in the combs. They can eat the eggs in the hive. The larvae emerge from their clutch and bore into the cells to feed on honey and pollen, causing the honey to pour out and ferment.

In addition to the diseases described above, bees are also susceptible to the following diseases:

If you want to learn more about bees, do not miss the following article, where we explain why bees are so important.

If you want to read similar articles to Most Common Bee Diseases, we recommend you visit our Other health problems category. 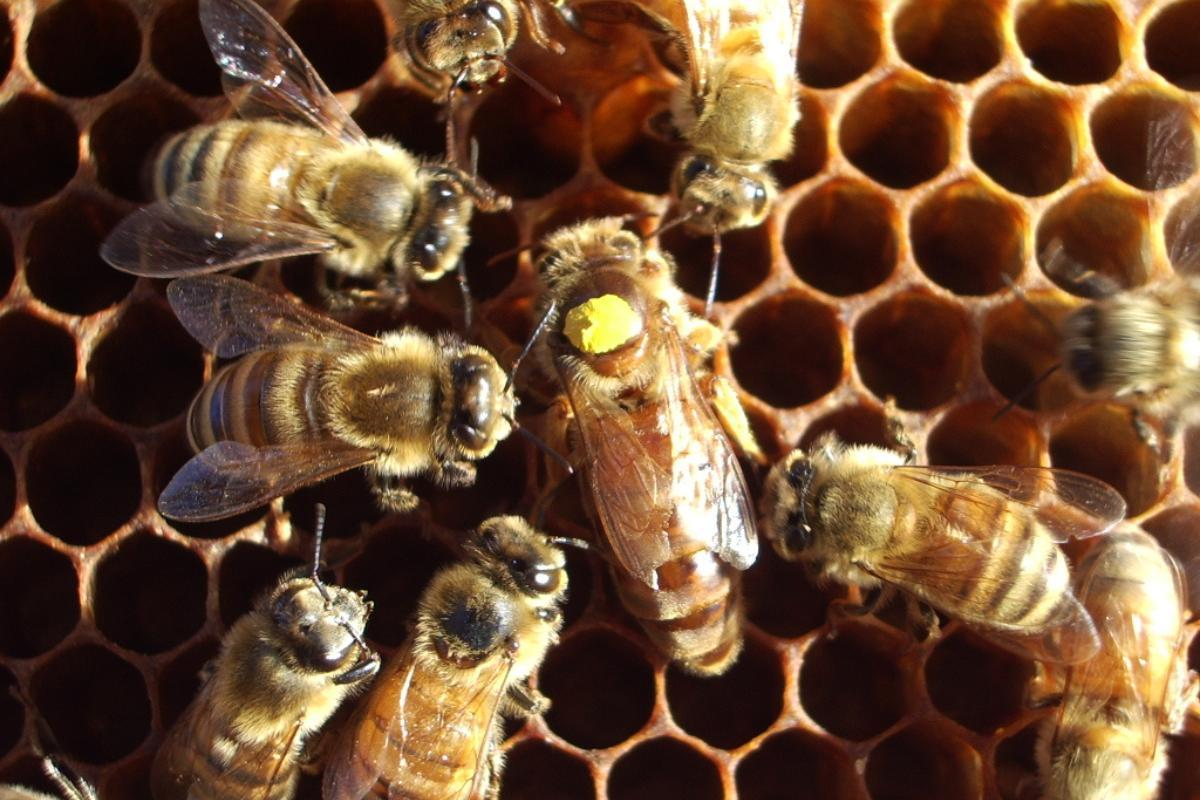 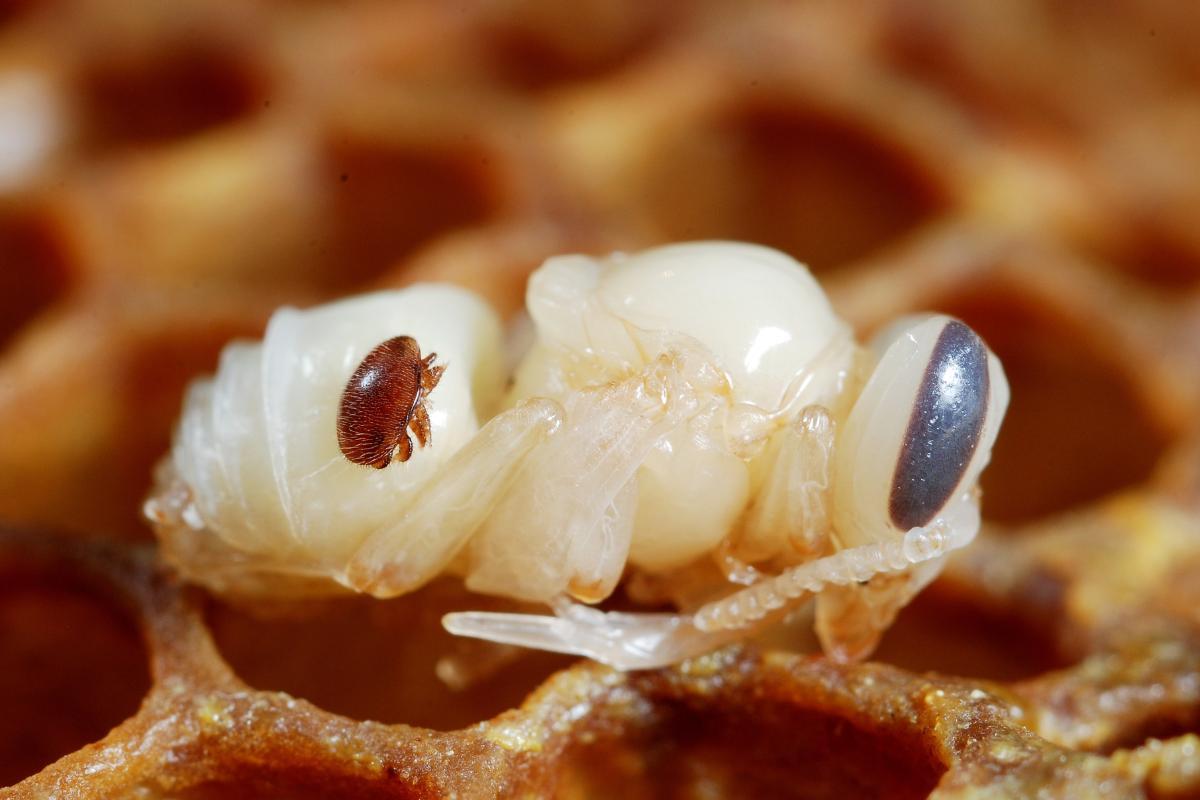 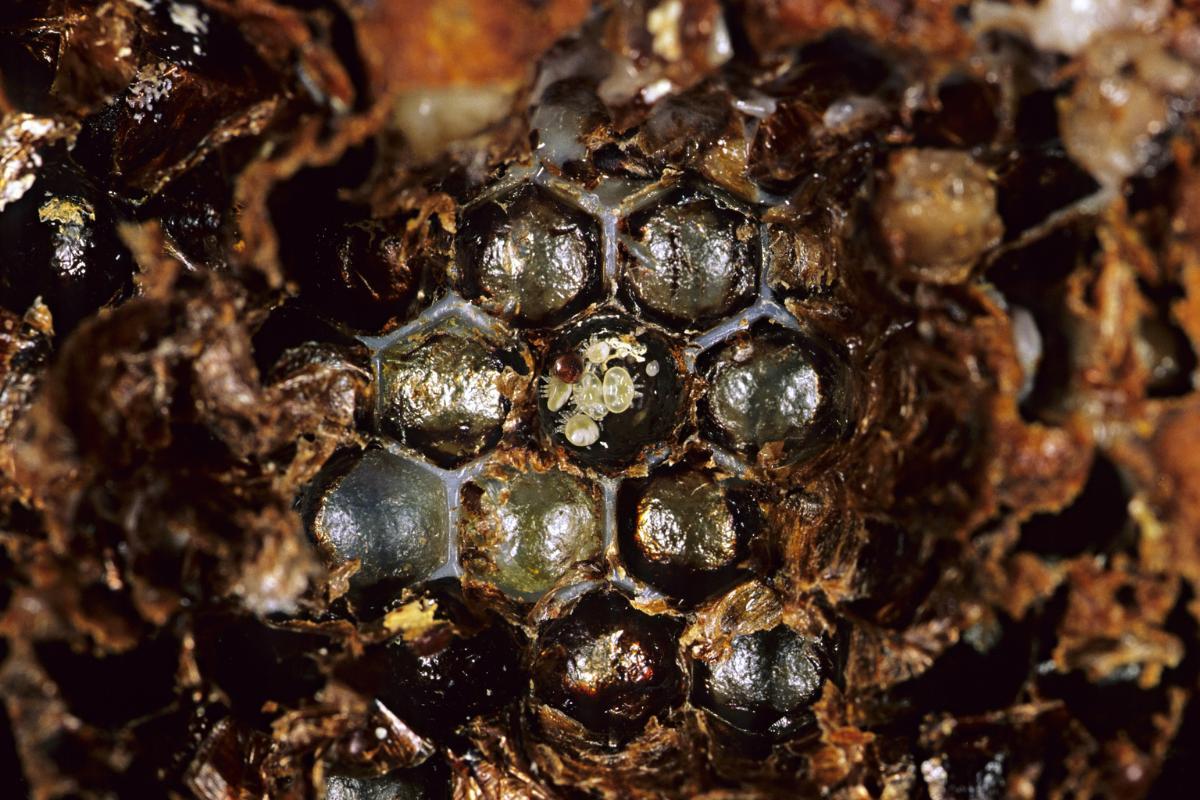 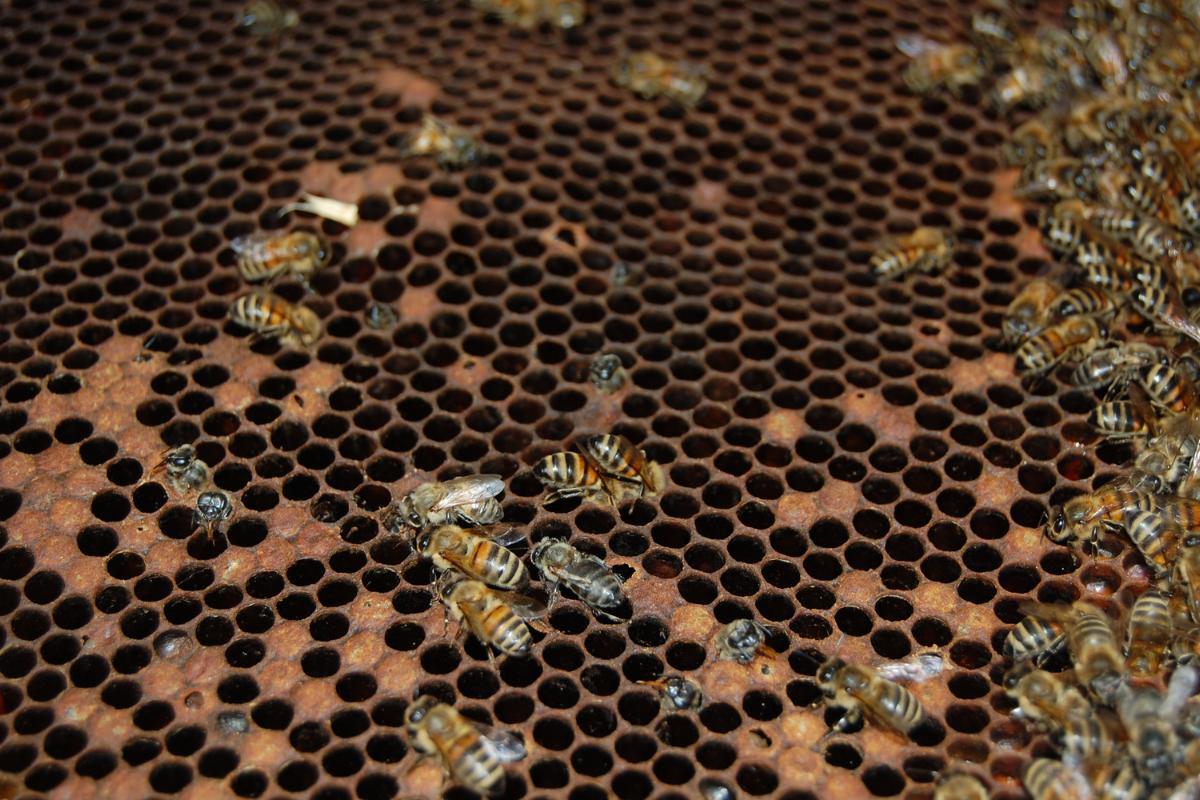 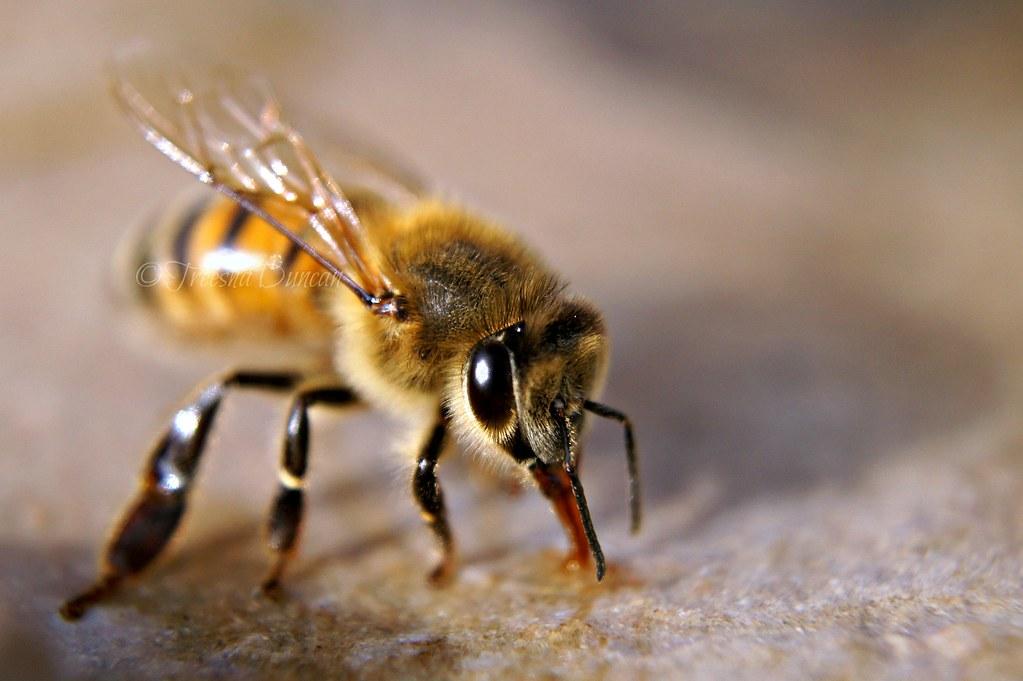 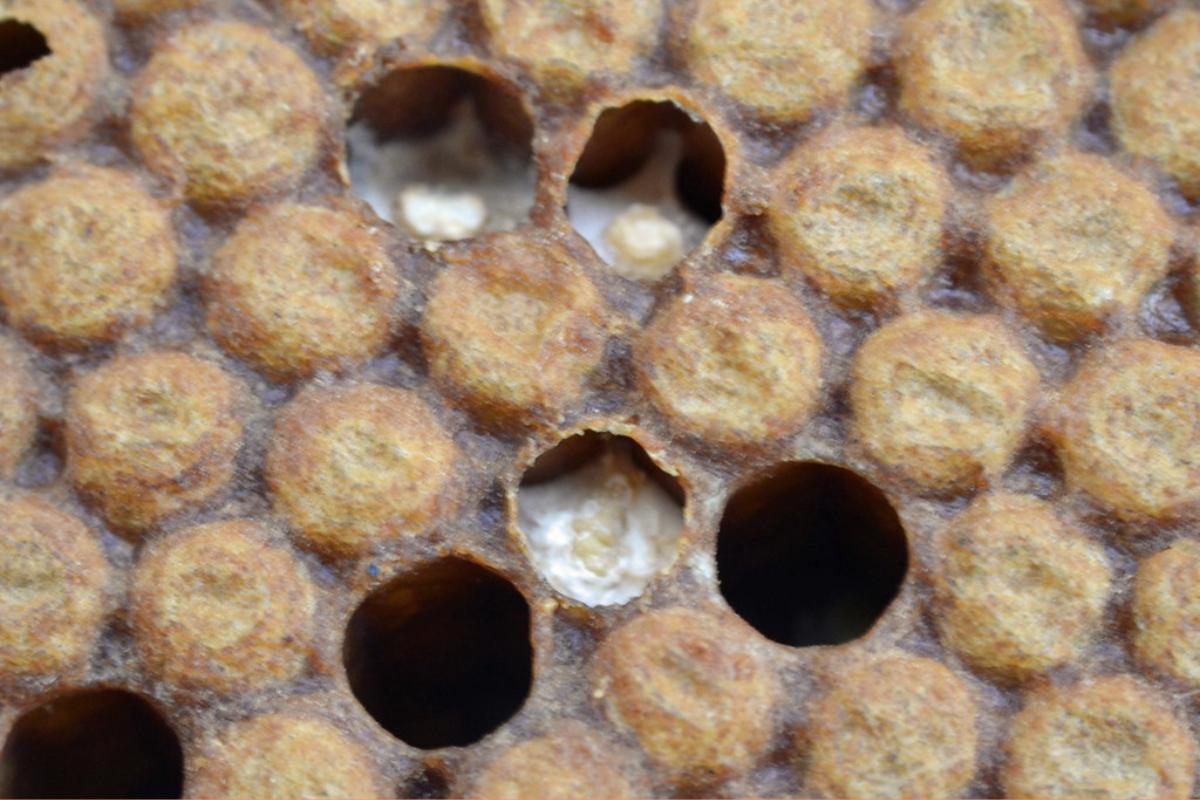 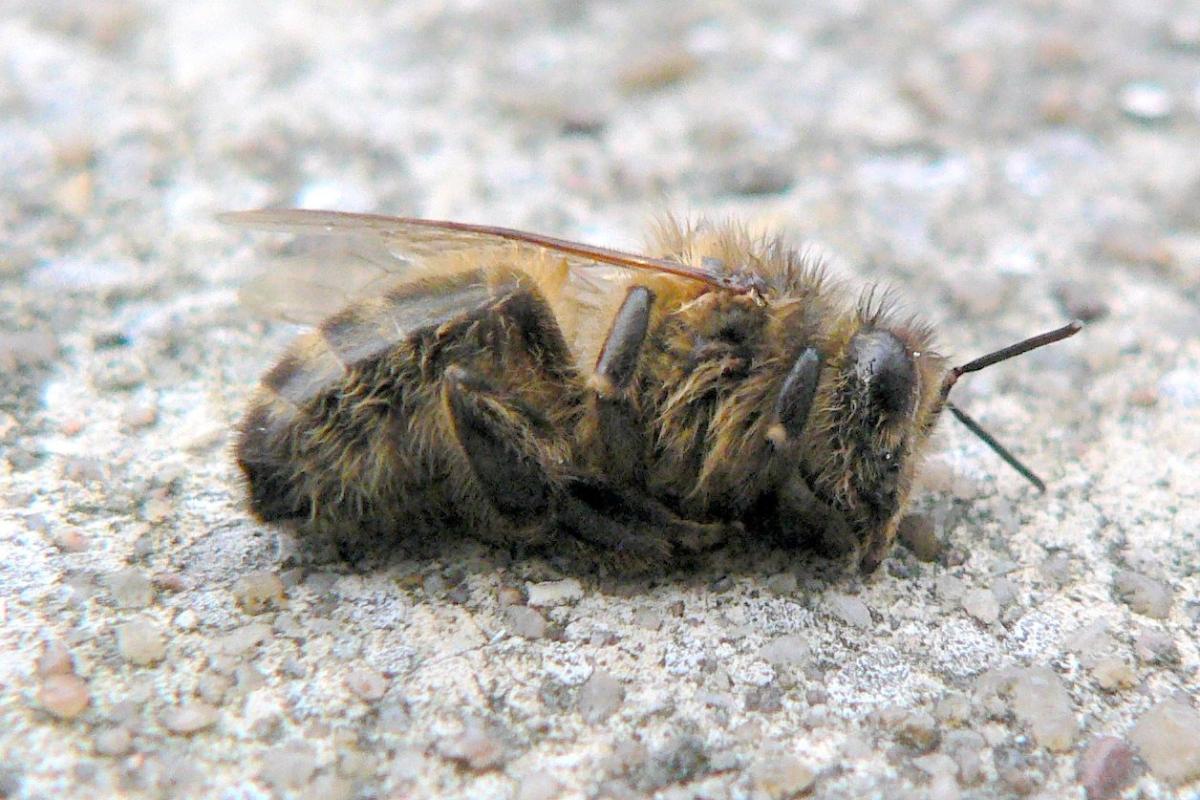 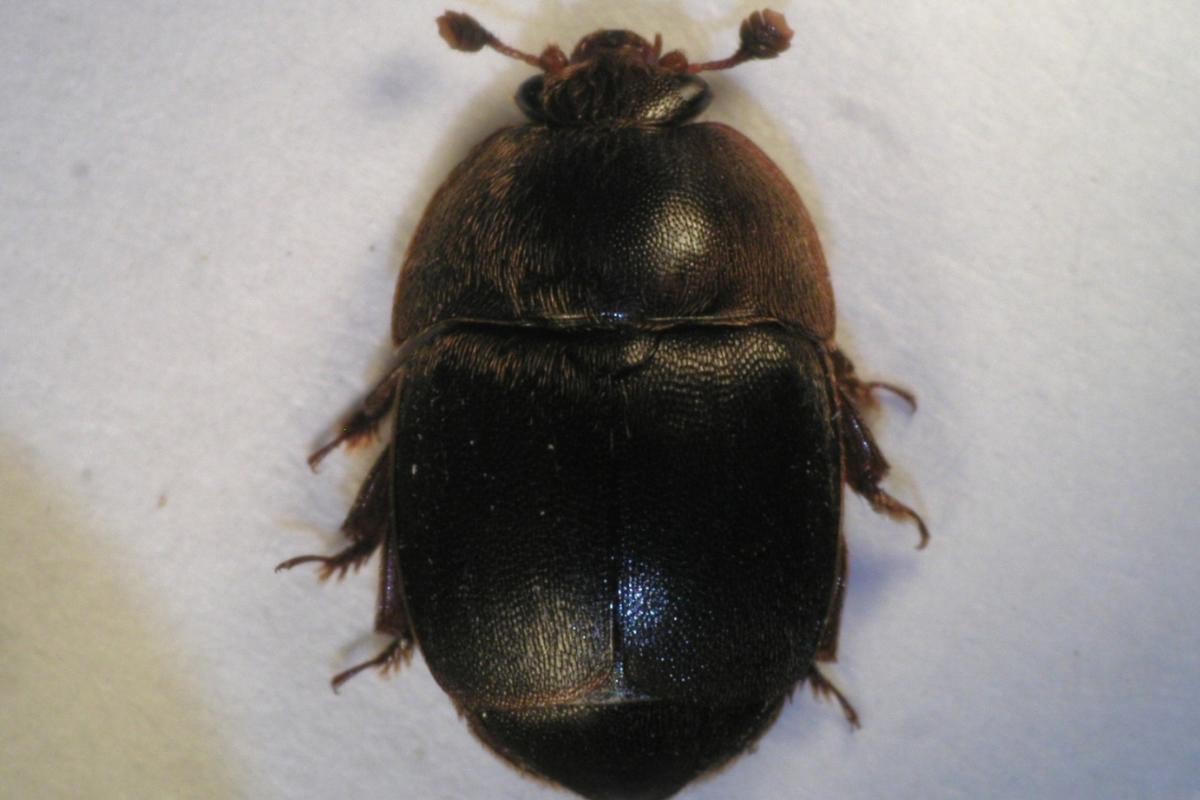 1 of 8
Most Common Bee Diseases
Back to top