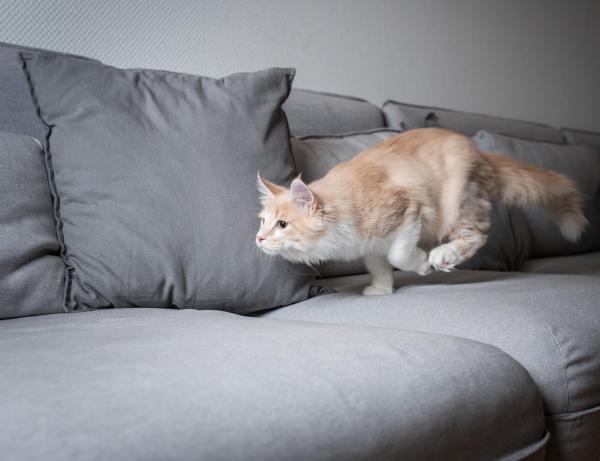 While recording it can make good social media fodder, having your cat round around the house like crazy is often disruptive. They can knock over items, disturb our sleep or generally cause a stressful atmosphere. More importantly, it can make us worry about the wellbeing of our cat. These sudden attacks of mania happen to most cats when they are young, but they usually lessen as they get older. Whatever age of the cat, they are an example of FRAP (frenetic random activity period), although they are commonly known as ‘zoomies’.

If your cat is running around like a maniac, it is important to understand why. In many cases, they will be aberrant and will not cause the cat any harm. AnimalWised explains more about zoomies in cats and highlights when they might be a problem.

You may also be interested in: My Cat Is Obsessed With Food
Contents

We have already explained that these frenetic bursts of energy are a form of FRAP, known as zoomies in cats. While this explains what they are, it doesn't explain why they happen. Here are the most common reasons why your cat is running around the house like maniac:

Frenetic random activity periods have been widely documented and studied in dogs. Although there is much anecdotal evidence of zoomies in cats, they are not as well documented in scientific research.

This behavior is often considered totally normal in cats. You should not worry if your cat starts running like crazy from time to time. They are likely releasing excess energy which often happens especially in cats which do not have outdoor access. They often involve actions which are expressions of cat hunting behaviors such as grabbing your ankles or jumping up onto shafts of light.

In these non-pathological causes of FRAP in cats, they usually only last for a very short period of time. They are common in kittens which generally have more energy to spend and they will calm down soon enough. Once they stop, they often retire for a rest as the energy is not depleted.

It is also possible that you have observed your cat run away after using their litter box. This curious behavior does not occur in all cats, but it is common among certain felines. It is considered a response to the instinct to move away as quickly as possible from the place where they urinate or defecate so that the smell does not attract predators.

When your cat's zoomies occur often, last a long time or are accompanied by other behavioral or physical symptoms, it is likely they have a health problem. This is especially the case when the cat runs like crazy multiple times a day.

It is possible your cat is naturally hyperactive, but often this restlessness is due to stress and anxiety. When the cat receives trauma, neglect, poor socialization, lives in a stressful environment or experiences any of the causes of stress in cats, it can result in stereotypies. These are behaviors which don't have any obvious purpose, but which the cat enacts repetitively. Running around like crazy is a common one.

While the vast majority of cases will not be due to a physical ailment, it is a possible reason for a cat running around like a maniac. Zoomies can be a symptom of diseases such a hyperthyroidism. This is a common reason why your old cat is running around like crazy, since it is more common in older cats. Its causes are not well known, it is believed to be influenced by factors such as genetics and diet.

Disease which affect hormone production can be the cause for the hyperactivity. For example, a tumor on the adrenal gland can cause overproduction of adrenaline and lead to more cases of FRAP. Some of these diseases are curable, some require symptom management and others may threaten the life of your cat. For this reason, the first thing you need to do if you suspect a pathological cause of zoomies is to go to a veterinarian.

Cats are naturally crepuscular animals which means their peaks of activity generally occur in the early morning and late evening. However, domestic felines have adapted to the routines and lifestyle of their guardians. The conditions of the environment in which they live such as temperature, daylight hours and outdoor access are also important. For this reason, it is not uncommon for cats to be particularly active at night.

This is especially prevalent in summer. When temperatures get too hot during the day, cats often rest in cool places and wait until nightfall to carry out activities. This includes playing, hunting, interacting with their guardians or simply going out for a walk around the neighborhood. If your cat is an indoor cat, they don't have many toys to play with, they live alone, they are young and they only get to see you at night, it makes sense they may be more active at this time.

If your cat suddenly goes crazy at night and even starts nibbling at you while you sleep, it likely means they need more stimulation at other times of the day. Of course, we first need to rule out a physical health problem, but we explain what you can do if your cat is acting like a maniac too often.

Cat hyperactivity is not the same as aggression, although there is some overlap. Learn more with our article on why a cat attacks you.

As we have explained, FRAPs are usually completely normal behaviors and not pathological. If they don't cause you harm or upset the equilibrium of the home, then you may not need to do anything other than see if they want to play. However, if the reasons for zoomies may be related to stress or boredom, then there are some things we can do when a cat is acting like a maniac:

If you want to read similar articles to My Cat Is Running Around Like a Maniac, we recommend you visit our Behavioral problems category.

My Cat Likes Being Slapped
My Cat Doesn't Like to Be Pet
Why Does My Rabbit Run In Circles? Possible Causes and Solutions
My Cat Is Scared of Everything
Related categories
SportsAdvanced educationAnimal games and funBasic education
Most read
1.
How to Make a Pit Bull Release its Bite
2.
Why is my Dog Pooping in the House Suddenly?
3.
How To Stop My Cat From Biting My Ankles
4.
Why Is My Dog Suddenly Scared Of Me?
5.
Tips to Train an American Bully
6.
How to Stop Your Dog From Peeing Inside at Night
7.
My Dog Keeps Biting His Bum And Tail - Causes
8.
Best Time of Day to Walk Your Dog?
Why is My Cat So Possessive?
Treating A Dog Like A Human
My Cat is Antisocial - Tips to Make Cats More Sociable
Why is My Cat Afraid of Me?
Why Does My Dog Like Sitting on Me?
My Dog Doesn't Like Me
Why Is My Cat Being So Clingy?
How to Make Cats Get Along When Your Cat Doesn't Like Other Cats 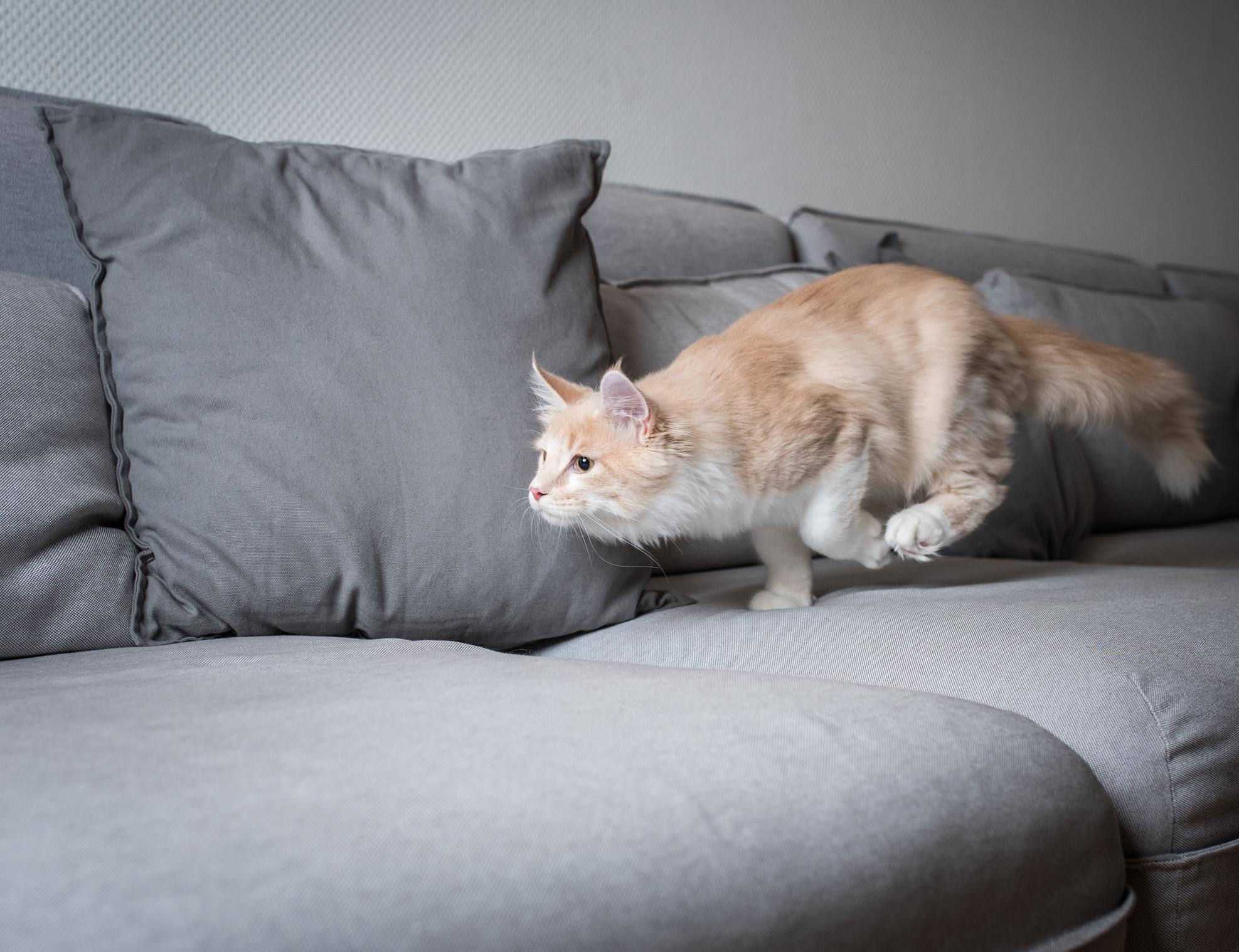 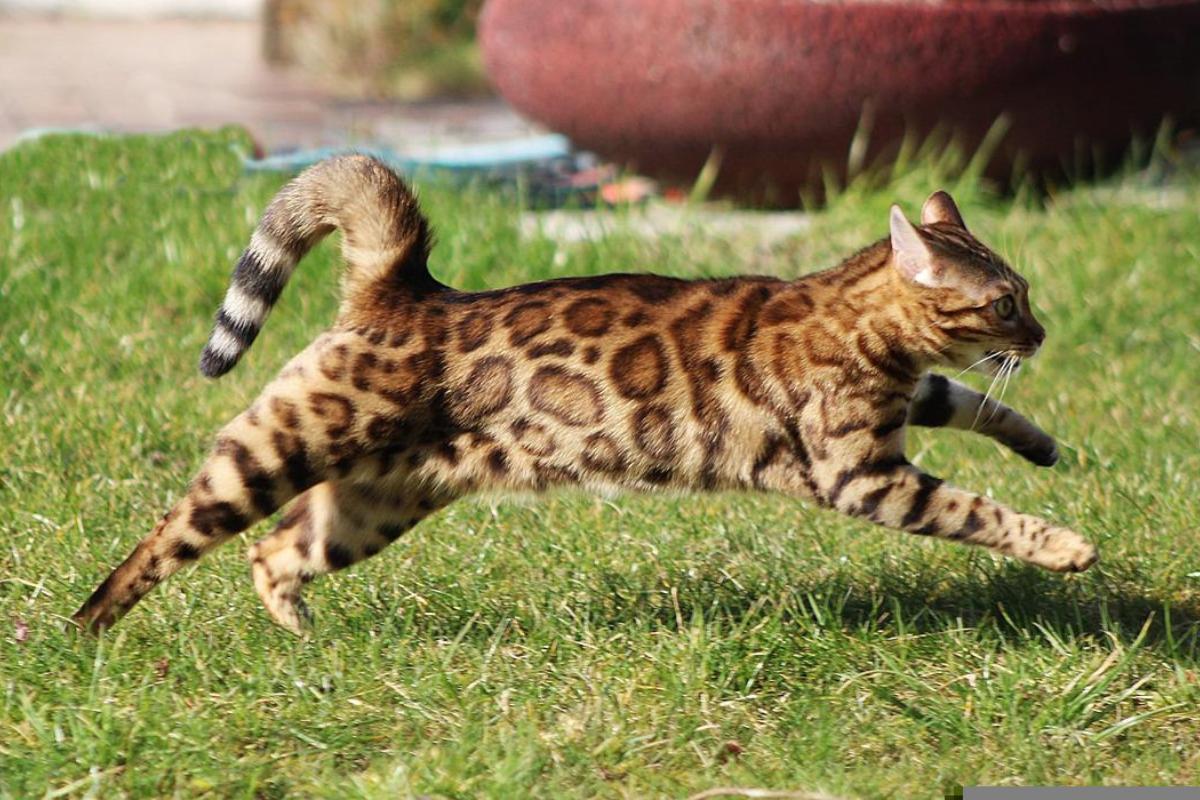