My Dog is Aggressive After Giving Birth 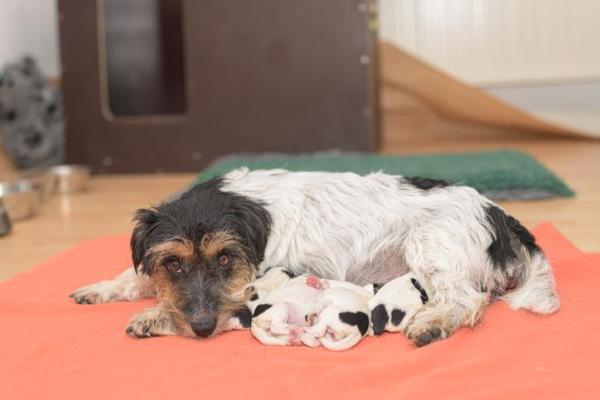 The birth of newborn puppies brings many emotions to human guardians. While we are overjoyed about these beautiful new lives, we also must feel the responsibility of their care. Fortunately for us, the mother is doing most of the hard work. Our job is to support her and provide the best possible environment to ensure the security of both herself and her puppies. However, there are various complications which can occur after the birth. While many of them relate to physical health, behavioral problems can arise.

In this AnimalWised article, we look at what happens when my dog is aggressive after giving birth. We discuss the various causes of aggression and show you what we may do about it. While providing a safe space for them is important, it is vital we keep the dogs under supervision in case a problem arrives.

You may also be interested in: Can I Shower My Dog After Giving Birth?
Contents

Just as with humans, pregnancy in dogs causes a lot of physical and emotional changes. This is in part due to the alterations in their body, especially hormonal ones. We will likely see differences in their demeanor, although this will differ according to the individual.

Some people ask if pregnant dogs are aggressive, but it's almost the same as asking if dogs are aggressive. A dog's temperament may differ when they are pregnant, but it will depend on the dog's personality. Some of them may become more easily annoyed or react more quickly to annoyances. However, many dogs become extra loving and look for more comfort during their pregnancy.

Although pregnant dogs may become easily annoyed, this doesn't mean they should become aggressive. If they do, we can't accept it as normal behavior and will need to find ways to curtail it. We also should take the dog to the veterinarian to ensure there isn't a physical reason why a pregnant dog has become suddenly aggressive.

Behavior of a dog about to give birth

While there may not be any maternal aggression before the puppies are born, it is possible they will develop it after giving birth. We should state that aggressiveness in the mother is not common. Even for first-time mothers, they should know to instinctively care for their puppies and not have any concerns.

It is also important to note that what seems like aggression, may actually be normal new canine mother behavior. If you see a mother dog growling at her puppies, it may simply be part of her healthy communication. Dogs will growl or bark at their puppies to keep them in line. This is especially important when you have a large litter of puppies running all over each other.

Puppies will have a gestation period of about 2 months, after which they will be born. Before their gestation is over, you will notice some particular changes in the mother's behavior. They may:

These signs of labor in dogs mean the birth of the puppies is imminent.

You will need to be prepared for the birth. This means providing a warm and comfortable environment, away from noise and distraction. You will need to have plenty of water nearby and food when they need it. The mother will take care of biting open the umbilical sacs, cutting the cord and generally welcoming the puppies into the world. We should observe for the safety of mother and puppies, but only intervene when completely necessary, i.e. when something goes wrong.

One of the reasons for providing a safe and quiet space is to allow the hormone oxytocin to pass between mother and puppies. If we manipulate them too much, it can affect oxytocin secretion and lead to stress. It also might pique the mother's instincts to protect her puppies if she thinks you are going to cause them harm.

Signs of maternal aggression in dogs

A mother dog will not become aggressive for no reason. As we stated above, it is possible an illness, extreme hormonal imbalance or other medical condition is causing aggression. If this is the case, you will need to take the dog to the veterinarian and may even need to rear the puppies on your own if the mother poses a threat (either physically or pathologically).

There are some signs your dog may be exhibiting maternal aggression. One of the most important ones is if they move their puppies from the nesting area. Some caregivers do not understand and may even find this behavior amusing. However, it is a clear sign the mother feels the security of the puppies is under threat. They are looking for another place because they feel there is some threat to their welfare.

Aggression towards us or other people in the home may manifest itself in barking or even intimidation. An aggressive attitude is also seen in their body language. If the dog feels threatened enough, they may become constantly nervous or restless, maybe even threatening harm. The aggression may even be taken out on her puppies, despite stemming from a need to protect them.

If you see some of the signs a dog is becoming aggressive after giving birth, you need to understand what might be causing this behavior. The following are the most common reasons for postpartum aggression:

These causes of aggression in a dog after giving birth shows the importance of leaving the dog alone as much as is needed. It is also important to note that you may choose somewhere comfortable for the dog to nest, but it is up to them where they feel comfortable. Don't try to force them to go somewhere they don't want to. Instead, spend time making their chosen spot more comfortable.

If your mother dog is biting her puppies after giving birth, we may need to intervene. However, this is only if the biting is inappropriate. A dog will pick their puppies up by biting the scruff of their neck. This is normal and not a sign of aggression. The mother may also snap at the puppies or seem to be biting them. This may be part of the process of educating them about the world. This happens in puppies after they start walking and their socialization process starts.

Another thing to point out is if we see the dog eating her puppies. While this may be quite a shocking sight, it is important to know that there is a reason behind this. The puppy is likely either stillborn or too sick to survive.

We should only intervene if the mother dog is aggressive to her puppies and the biting is going to cause them harm. The reason for this aggression is stress and fear. If we cannot reduce their fear, then the puppies are in danger and will need to be moved. This is dangerous since the puppies rely on their mother for everything, so it should only happen when completely necessary.

What to do if a dog is aggressive after giving birth

To recap, there are ways you can best avoid aggression in your dog. While you should be looking after their general needs all of their life, this is especially important when they give birth as they will feel more vulnerable. Here is what you can do to prevent aggression in a dog after giving birth:

If in any doubt or if the aggressive dog is putting the puppies' health in danger, you will need to take them to a veterinarian. The same goes if their health is threatened. Otherwise, intervene as little as possible. If you do need to remove the puppies from the mother, the following video may help:

If you want to read similar articles to My Dog is Aggressive After Giving Birth, we recommend you visit our Gestation category.

What My Dog Should Eat After Giving Birth
Is my Dog about to Give Birth? Symptoms of Labor
How do Snakes Give Birth?
How Long Does it Usually Take for a Cat to Give Birth?
Related categories
Skin careExtra careBasic careHeatFur careNail care
Most read
1.
When Does a Dog Go Into Heat After Having Puppies?
2.
Third Eyelid Showing in Cats - Causes and Treatment
3.
Can You Touch Newborn Puppies?
4.
Why Is My Pregnant Dog Not Eating?
5.
Why Has My Cat Only Had One Kitten?
6.
How to Control a Male Dog Around a Female in Heat
7.
Dog Pregnancy - Week by Week
8.
How do Horses Mate? - Horse Reproduction
How to Know if My Hamster is Pregnant
4 Most Common Cat Birth Difficulties
Why Is My Pregnant Dog Not Eating?
How Long Is Labor In Dogs?
When is a Dog Cesarean Section Needed?
Why do Cats Move Their Kittens?
Rabbit Pregnancy - Symptoms, Stages and Care
How to Tell if My Guinea Pig Is Pregnant - Physical Signs and Behaviors

My Dog is Aggressive After Giving Birth 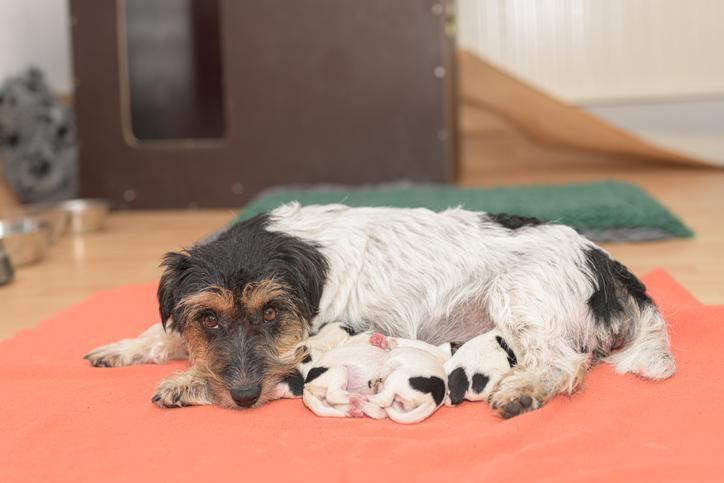 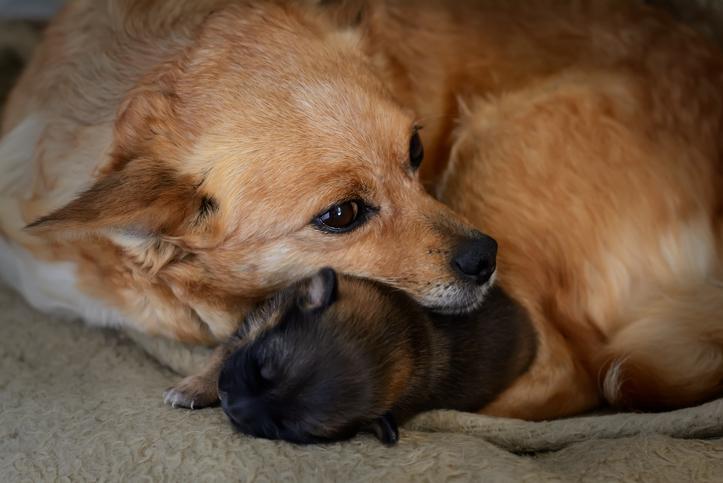 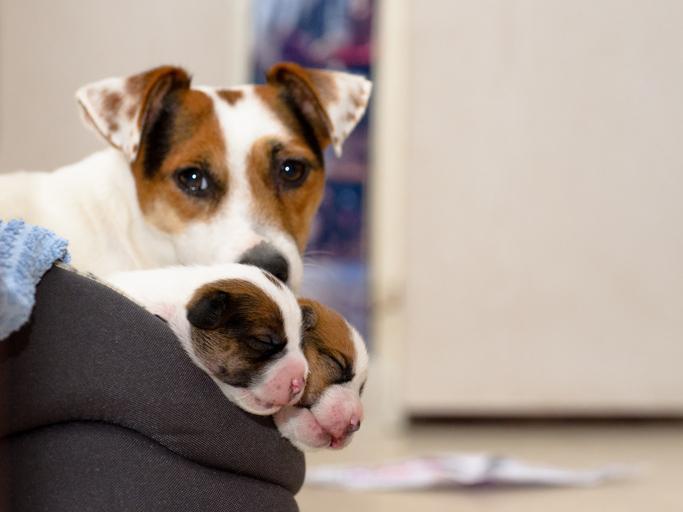