My Dog's Paws Are Red

While swelling and redness of a dog's paws can be observed, it is common for guardians to be first aware of this problem when we notice our dog keeps licking their paws. Whatever the underlying cause, if there is swelling and redness it is likely to be irritating for the dog. Licking their paws is a way to relieve their frustration, but it can also exacerbate the redness and even lead to secondary infections.

Since there are various reasons why a dog's paws are red, AnimalWised looks at the causes of redness in a dog's paws and what treatment options are available. Doing so can help prevent localized problems such as lameness in the affected paw, as well as systemic problems which threaten their entire organism.

You may also be interested in: My Dog's Paws Are Dry and Rough - Hyperkeratosis in Dogs
Contents

Why does my dog have red paws?

The medical word for redness of the skin is erythema.When we see that a dog has erythema on their paws, it is helpful to know where it is located:

Once we have distinguished the location of the redness, we can look at the causes of erythema on dog paws,

Various types of allergies can cause reddening of the skin on a dog's paws. The most important ones are:

The pathogenic microorganisms that cause skin infections are often bacteria or fungi. When these agents cause an infection in the skin of the paws or other areas of the body, one of the signs that can be observed is erythema or redness of the skin. The most common infections are:

The parasitic diseases that can affect the skin of a dog's extremities are mainly caused by mites:

Anything which is sharp enough to pierce the skin of the dog's paws can lead to redness. Sharp objects such as broken glass, nails or even natural materials such as sticks can result in swelling. This is due to the body trying to reject the object from its tissue, usually accompanied by secondary bacterial infection. Since the foreign body breaks into the skin, the dog usually tries to lick their paws to relieve associated pain.

One common foreign object which can stick into a dog's paws are foxtails. These are arrow-shaped grass clusters (spikelets) which are used to disperse seeds for growing new plants. These very sharp spikes proliferate in spring and summer, often sticking into the dog's skin. Their paws are especially affected and it is common for them to pierce in between the dog's toes, causing redness, pain, inflammation and potentially leading to infection.

Learn more about prevention and treatment of foxtails in dogs.

Both high and low temperatures can cause inflammation and redness in the pads of dog paws. In summer, ground temperatures can become very high and burn their sensitive skin. This is especially so on dark pavements such as asphalt. Skin damage can also be caused by freezing winter temperatures, when the ground is covered by ice or snow.

Walking for a long time or performing intense exercise on very abrasive ground can erode the skin and even ulcerate. These ground types include asphalt, cement or beach sand, especially if they are hot in summer.

It is possible that an abnormal growth can lead to redness of the dog's paw. Tumors, whether benign or malign, can appear almost anywhere on a dog, leading to inflammation. This swelling is not always red, but it can be, especially if it is ulcerative.

One type of growth affects a dog's paws in particular. This is known as an interdigital cyst. Interdigital cysts in dogs can be due to various causes, some of them detailed above. It is common for the dog's paws to be red between pads due to these cysts and they will likely lick them a lot. Treatment will depend on the underlying cause.

Erythema (redness) of a dog's skin is not a disease, but a symptom of the various causes outlined above. However, it is associated with a grouped of symptoms associated with skin damage. These dermatological signs also include:

Looking at the different dermatological effects will help a veterinarian determine the underlying cause of the problem. We should always relate as much as we can when we take them to a clinic to help with a diagnosis.

Treatment of red paws in dogs

As you have been able to discover throughout the article, there are multiple causes that can cause red paws in dogs. For this reason, whenever you detect this clinical sign, it is advised you go to your veterinarian. They can assess the cause of this dermatological problem and establish the most appropriate treatment.

For example, in case of food allergy it will be necessary to find the food that produces the reaction and eliminate it from their diet. When a bacterial infection occurs, it may be necessary to administer antibiotics and even use a specific antibacterial shampoo. If demodectic mange is the cause, administering the appropriate antiparasitic is the main treatment.

As we can see, the treatment varies enormously from one cause to another. This is why it is essential to identify why the dog has a red leg in order to cure it. In general, the problems which cause redness can be treated if they are due to parasites, infections or foreign bodies. With allergies and other skin diseases, the symptoms may need to be managed rather than the disease cured. Tumor treatment will depend on the extent of their growth and whether or not they are cancerous.

For related information, consult our article on skin tumors in dogs.

When we talk about home remedies for anything, we know they are not replacement treatments for those prescribed by the veterinarian. However, there are supportive treatments or symptom management techniques which can prove beneficial when our dog is affected by an inflammatory erythema on their paws. They will be affected by the specific cause:

If the redness in your dog's paws is caused by dermatitis, you can consult this other article on atopic dermatitis in dogs. 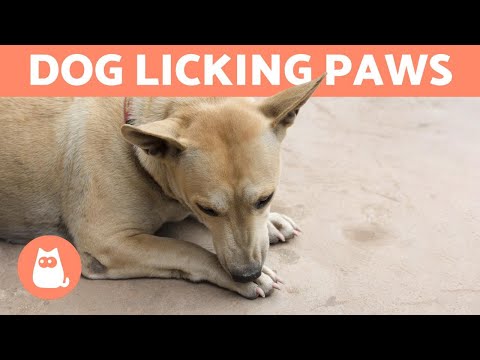 How to prevent red paws in dogs?

Some of the causes of red paws in dogs, such as allergies, cannot be prevented. However, many other causes can be avoided by means of a simple preventive measure. These may include:

If you want to read similar articles to My Dog's Paws Are Red, we recommend you visit our Skin problems category.

Bibliography
My Dog Has Pimples - Is it Canine Acne?
Dog Paw Problems - Causes, Symptoms and Treatment
Malassezia In Dogs - Contagion, Symptoms, Causes and Treatment
Why Does My Dog Have Irritated Skin?
Related categories
VaccinationIntestinal problemsFirst aidHome RemediesEye problemsNeurological diseases
Most read
1.
What to Do if My Dog has Something Stuck in his Throat?
2.
My Dog Is Bleeding from His Penis
3.
My Dog Keeps Licking Her Private Area - All Possible Reasons
4.
My Dog Has Pus Coming From His Penis
5.
Why Does My Cat Push Out His Penis and Lick It?
6.
My Cat Has Liquid Coming From Their Anus
7.
My Dog's Poop Starts Solid Then Goes Soft
8.
My Dog Keeps Making a Gulping Sound
My Dog Is Rubbing Their Butt on the Carpet
My Dog Has Hives - Symptoms, Causes And Home Remedies
How to Treat Pemphigus in Dogs
Why Does My Dog Have Black Skin?
Bump on My Dog's Ear - Causes and Treatment
Dog Abscesses - Causes, Symptoms and Treatment
Calcinosis Cutis in Dogs - Calcium Deposits in Dog Skin
Why Does My Dog Have Purple Spots On His Ear?

My Dog's Paws Are Red 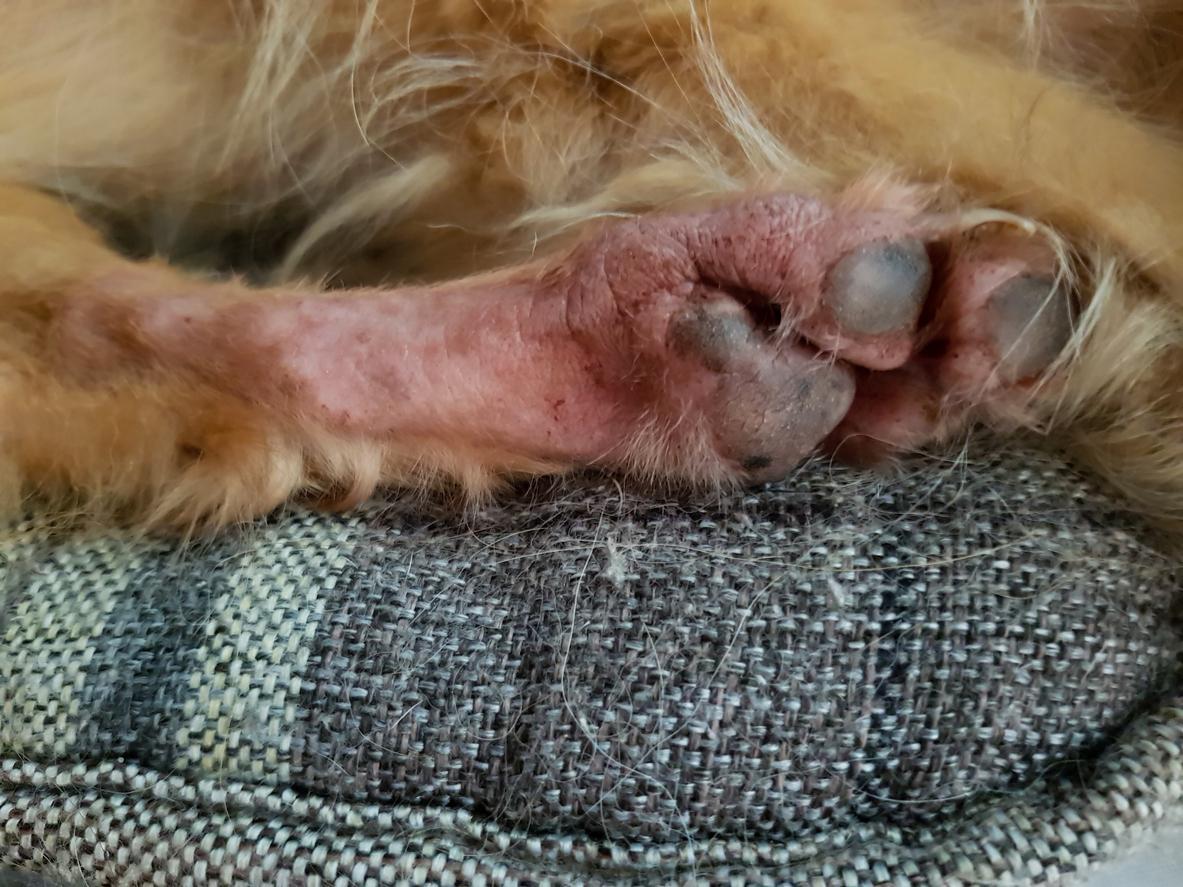 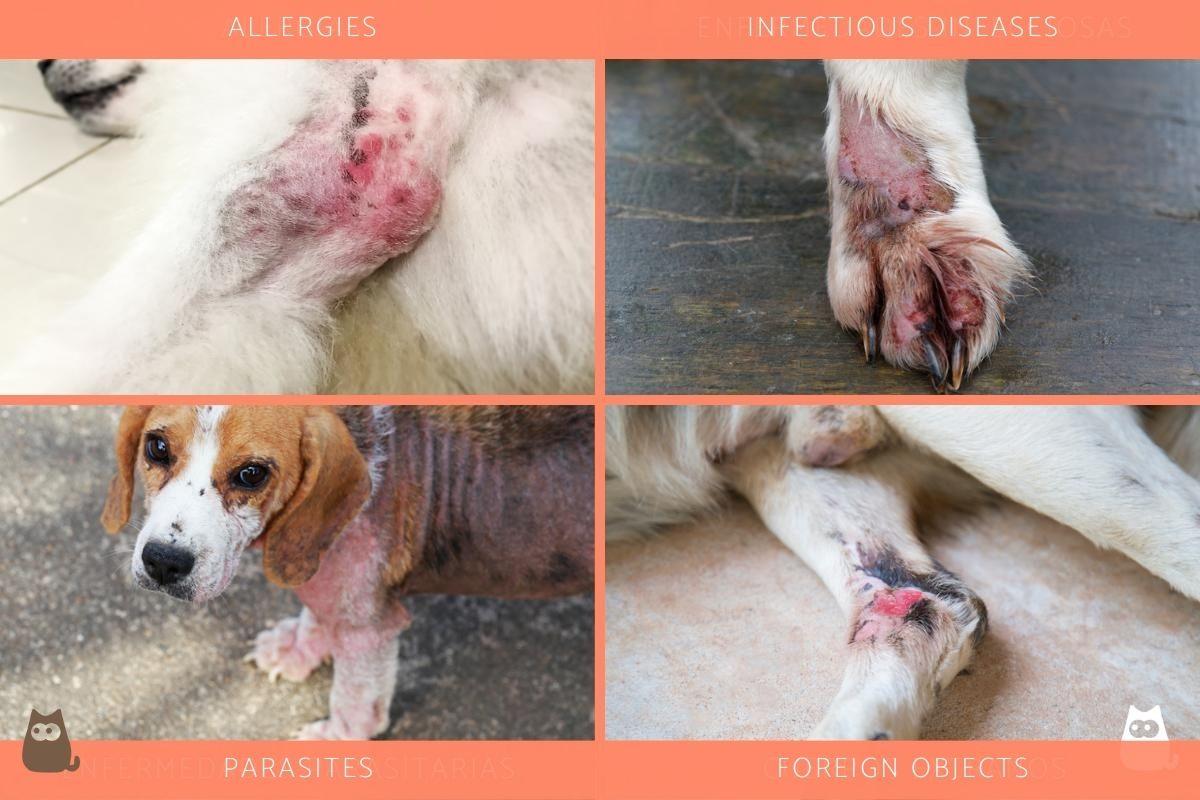