Similarities Between Humans and Chimpanzees - Behavior and Biology

Although it is not used much outside of scientific language, we humans are part of the primate order. As one of the great apes, we have relatives in the ape world, some more distant than others. It is the chimpanzee which is considered our closest ‘cousin’, so it is understandable we should share some characteristics with them. If you want to know more specifics about the similarities between humans and chimpanzees, AnimalWised is here to get you up to date.

By looking at the behavior of chimps compared to humans, as well as some shared biological traits, we can better understand how related all living creatures are on this planet. In doing so, we might also be able to also see how vital it is we preserve the sometimes fragile ecosystems we all inhabit together.

You may also be interested in: Are Rabbits Rodents? - Similarities and Differences
Contents

To properly compare the similarities between human and chimpanzees, it's important to frame the biology of them both. Some people want to discuss the similarities between humans and primates, but this is a little misleading. As we stated in the introduction, the issue is that we are also primates. Speciation is the process by which one species of organism has separated into two separate and distinct species. This is a process which takes millions of years, but it is believed that the last distinct species from which humans diverged was the one which split us from chimpanzees. This means chimpanzees (and the bonobo which are the other primate making up the genus pan) are the closest relative to humans.

The bonobo is sometimes known as the bonobo monkey, but it is actually a great ape. Great apes are the primates of the species Hominidae which includes:

If we look at the ape vs. monkey issue, many people see the similarities (of which there are many), but in evolutionary terms, we humans are closer to apes. By looking at DNA, we can see just how close we are to these other great apes. When the chimp genome was first properly sequenced in 2005, it was found that chimps and bonobos share 99.6% of the same DNA[1]. Humans and bonobos are known to have 99.0% of the same DNA.

Since we share common ancestry with chimpanzees, it is understandable we have certain similarities. There are many differences also, but what these correlations show is just how linked we are to the animal kingdom. By studying and learning these similarities and differences, we get to both better understand the animal kingdom as well as our place within it. Looking at the biological, morphological (the physical aspects of an organism's body) and behavioral similarities will best help us to do this.

Despite what you might think, the differences between human and chimp brains are not vast. The main noticeable difference is size, with the human brain being about 3 times the size of a chimp's brain. However, the fundamentals work very similarly. They use the brain to communicate, using the same brain area to do so as humans. This communication may not take the form of language as we know it, but they do use both visual and vocal methods.

Both human and chimp brains are asymmetrical and the extent of this varies between individuals. It is the development as the individual ages which determines intelligence levels and humans are known to have a rapid increase in brain size during early infancy which chimpanzees do not[2]. There is a purported specimen known colloquially as the ‘missing link’ which has a brain in size and scope which is between chimp and human, but it is yet to be discovered in fossil records.

The brain controls the decisions both humans and chimps make, but their morphological structure (i.e. their body) facilitates the execution of these decisions. One such decision is body movement or locomotion. Humans and chimpanzees share the same way of walking on two legs, doing so thanks to a similar skeletal structure. Although they differ in the rotation of their pelvis, which is much more pronounced in chimps, the magnitude of their stride when walking is very similar i both species.

The similarity in the locomotion of chimps and humans has made some suggestions for evolutionary biologists. The main suggestion is that the ‘missing link’ or, more accurately, the common ancestor between humans and chimpanzees, may have been bipedal. This means it was able to walk on two legs, at least more efficiently than chimps.

The use of tools

Although chimps and humans share similarities in locomotion, they are not completely bipedal. They more often walk on all fours, meaning the majority of the time they are quadrupedal[3]. This doesn't mean they can't stand and use their forelimbs as ‘arms’. They can balance on two limbs and use the others to pick food, interact with others and even put materials together.

In particular, chimps are able to use ‘tools’. These tools might be in the form of a stick, a rock or any object they may manipulate to perform a specific function they are unable to do with just their own morphological traits. They use these tools for their basic needs such as obtaining food, socializing or as a weapon. They also use them to play (see below).

Another similarity between humans and chimpanzees is the ability to analyze thoughts and reflect upon them. While the extent to which these processes can be carried out is still unknown to humans, there have been studies which show chimps have the ability of metacognition. Essentially this means thinking about thinking or, more simply, reflection on thoughts. This means actions are not simply carried out, but a thought process is involved in making the decisions based on previously earned knowledge.

One study showed that chimps “demonstrate metacognitive monitoring and control when [they] engage in an information seeking task”[4]. Their ability for metacognition is not as advanced as that of most humans, but it does exist.

It is not yet possible to claim that chimpanzees have ‘morality’. at least not in the same context as humans. The question of ape morality is something which has been contentious between biologists and philosopher's alike. Morality is a complex and hard to define term, but it can generally be seen as doing 'good' for a community. Not many zoologists would claim that chimpanzees are truly 'moral' beings, but then there are many philosopher's who would contend that neither are humans.

What we can say is that chimpanzees do act in ways which have been seen as ‘doing good’ for other chimpanzees. Examples include defending family members against attacks or even drowning in rivers in an attempt to save their kin.

As we have stated, we humans and other primates share certain methods of communication. Here, we highlight the ability to express certain emotions. It is too easy to think that only humans have the ability to express positive emotions. In truth, the ability to smile and laugh is something we share with our chimp cousins. How their sense of humor is developed is not fully known, but we do know that they find certain things funny and will laugh in response.

Although younger chimps do so more, both adult and adolescent chimpanzees play games. This activity is used to develop certain skills, but it is also used as pure entertainment, meaning it has no other discernible function. In playing these games, chimps use logic, imagination and cooperation. Older chimps which don't normally engage in play will play with younger members of the group as a means of bonding.

Chimpanzees will tickle each other and get other reactions simply as a means of social communication, just as we humans do. They also emit a particular sounds known as a ‘play-pant’ which is only used when engaging in game activity. When given the opportunity, chimps can even play videogames.

If you were given the option of a cooked potato or a raw one, what would you choose? Due to our palate, we are able to discern that cooked potato is better for us. We are not the only ones in the animal kingdom which have this preference. Although they may not be sophisticated enough to properly barbecue a baked potato, chimpanzees have been seen to prefer cooked food when given the option.

Although they do not understand some of the principals of cooking in terms of applying heat to food, chimps can understand some of the basic differences. While chimps would normally eat any food as soon as t was presented, when given the option, many would delay their gratification by waiting for the cooked food. Chimps will also store up raw food if they think it is going to be cooked later[5].

Another similarity between humans and chimps is that these animals cultivate friendships. They share food, they entertain each other, they collaborate on tasks and they even comfort each other with reassuring gestures such as hugs. But not all chimps will be friends. As with humans, chimpanzees will have certain preferences in making friends. These may be due to shared personality traits, but they are known to trust the ones they consider friends more than others.

If you want to read similar articles to Similarities Between Humans and Chimpanzees - Behavior and Biology, we recommend you visit our Facts about the animal kingdom category.

1 comment
Rating:
Kiersty Miller
03/07/2019
Question: Can you tell me the grip strength of an adult male Chimpanzee? Thank you for your time :)
Similarities Between Humans and Chimpanzees - Behavior and Biology 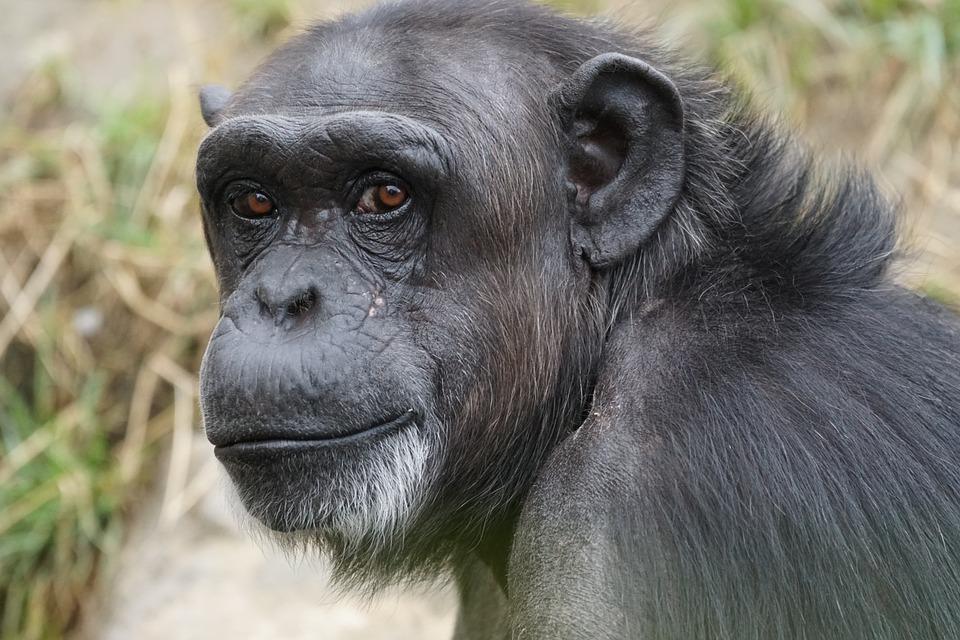 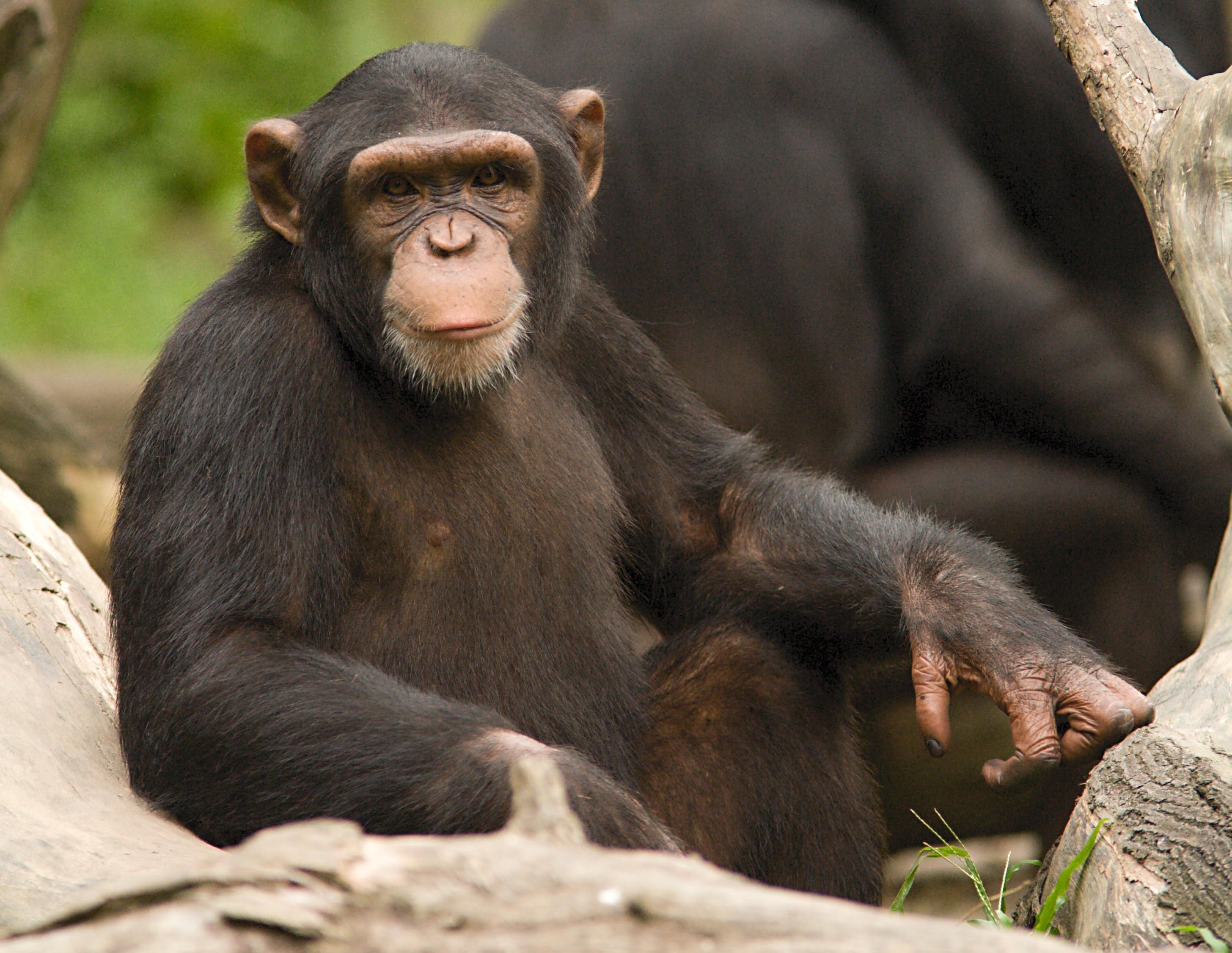 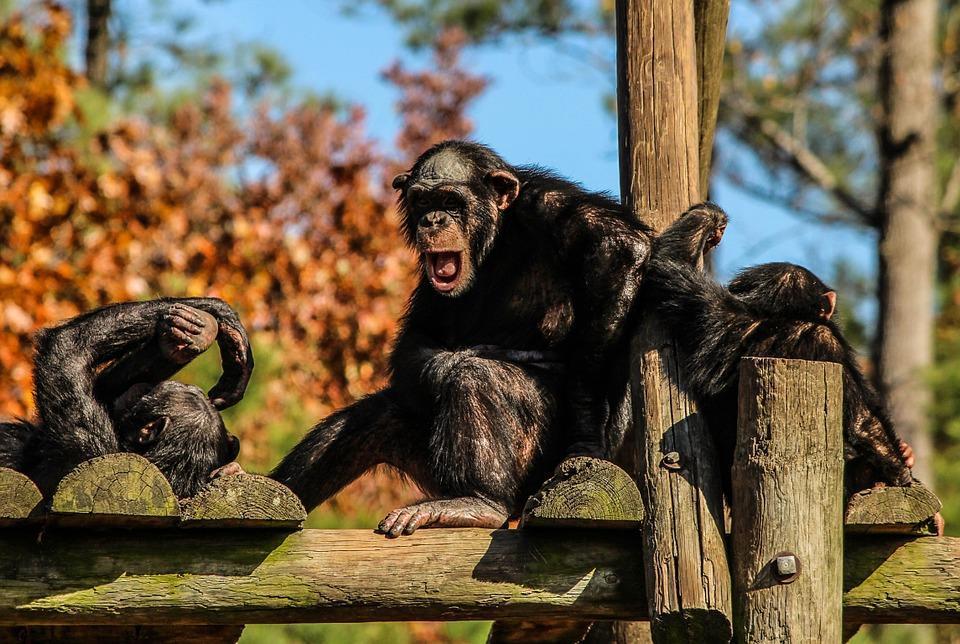 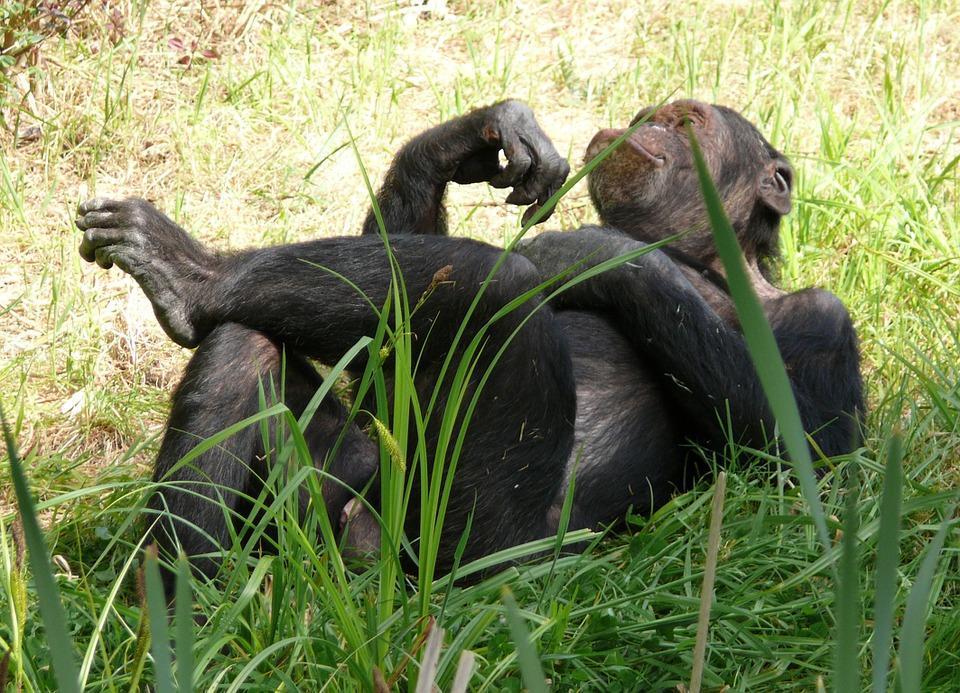 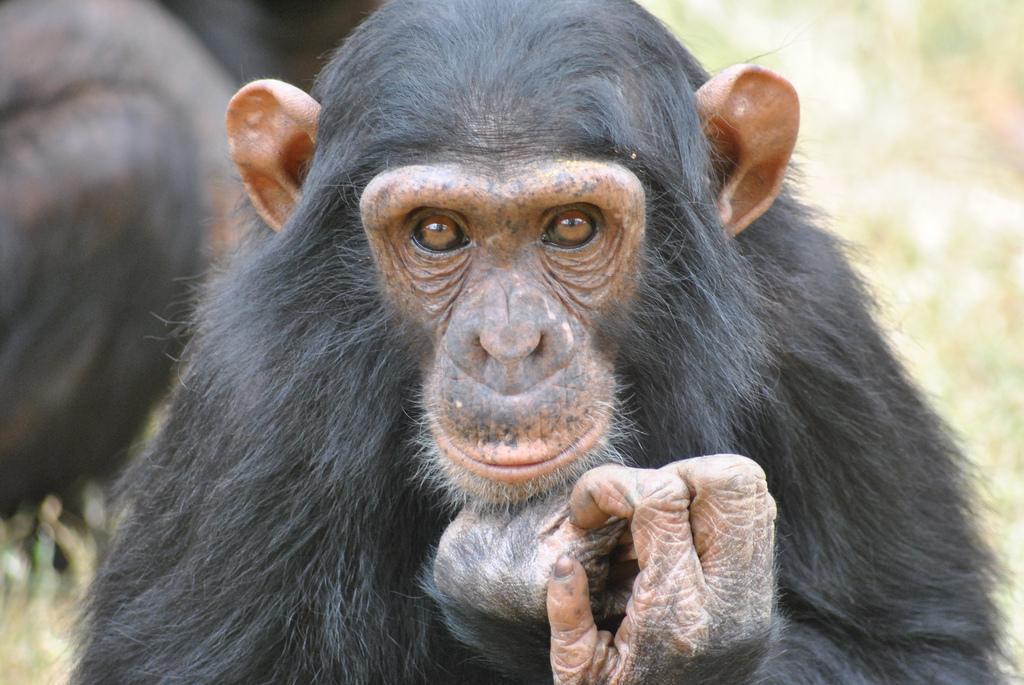 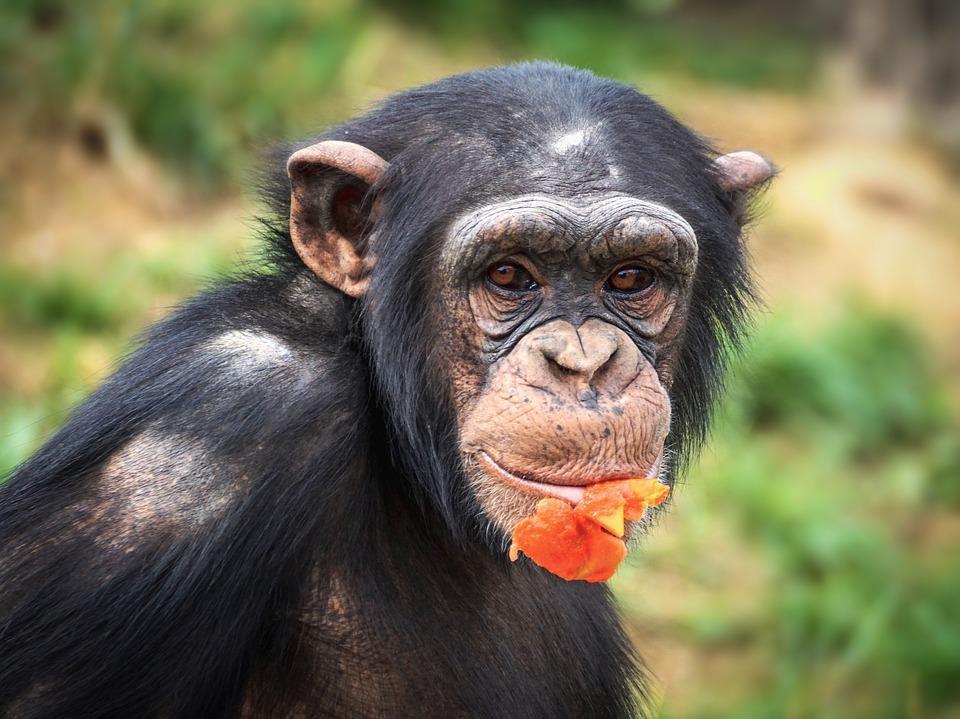 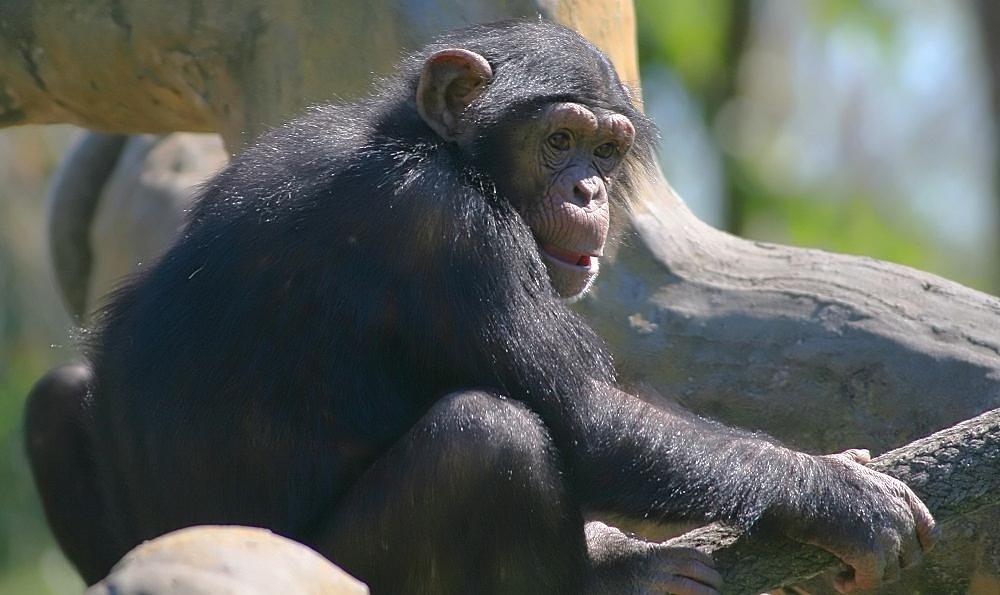