You may have arrived here by searching for the cat breed with no tail, maybe under the assumption there is only one tailless cat breed. Likely the most famous is the Manx cat, a feline with no tail from the Isle of Man. Although it may be the first which comes to mind for many, there are indeed other tailless cat breeds. We do not mean cats which have been unfortunate enough to lose their tail in an accident or trauma. These cat breeds have inherited a gene which means they never have a substantial tail.

In this AnimalWised list of 7 tailless cat breed types, we show you all the known cat breeds without a tail. We include those which a small bobtail as these do not have a tail in the traditional sense of domestic cat breeds.

You may also be interested in: Types and Breeds of Husky Dogs
Contents

Why are there tailless cats?

To understand why we have cat breeds with no tail, we need to understand a little about genetic inheritance. All the features of cats are determined by genetics. The Domestic Shorthair cat is the term we use for mixed-breed cats, felines which have have an undetermined genetic lineage. They often have features we consider ‘generic’ to domestic cats, but actually they have a wide range of genetic traits which produces cats of all shapes and sizes.

Thanks to human interference in this genetic process, different cat breeds have emerged which conform to certain physical traits. It doesn't mean all the cats of a certain breed will looks the same, but they will share certain similar features. For example, there are some which might have long hair, others with large ears. But these cats might also have different colored coats or have other varying traits.

The reason for these variations is that some genes are dominant and other are recessive. If the gene sequence of a given cat is in such an order that the dominant genes express themselves, they will have certain traits. For example, with Persian cat breeds, some have peke-typing, others have Traditional typing. This determines whether or not they have a pronounced snout.

For cats with no tails, genes are also the reason they are missing the appendage. Some tailless cat breeds all have no tails, others have different lengths depending on their genetic makeup. Below we share these cat breeds with no tails and more information about each one.

Manx cats have an interesting heritage which is surrounded in folklore. Since they are native to the Isle of Man, many have claimed they arrived on the island after surviving a shipwreck. However, what is most likely is that the relatively close community of the island allowed for the tailless gene to proliferate.

They are common on the island, but their population is in decline. This is, in part, due to the problems of the dominant M gene which causes the taillessness. Manx cats have two alleles of the mutated M gene, one of which is dominant (Mm). Cats with two dominant M genes (MM) will die before they are born due to significant problems with their nervous system.

For this reason, Manx cats should be crossed in a way to reduce the likelihood of miscarriages.This is done by breeding them either with a different breed or Manx cats with tails (as not all will have the dominant gene).

Most Manx cats do not have tails, but their other characteristics include:

They are calm, sociable, intelligent and affectionate cats which are considered very good hunters. In regard to health, they are usually healthy and long-lived cats. However, during the kitten's development, the veterinarian needs to monitor their spine as malformations can occur.

Within the Manx cat breed, there is a long-haired variety, known as Cymric. Although it has long and bushy hair, it is known for not easily knotting.

This tailless breed of cat reached the Asian continent as early as 1,000 years ago. Their tail mutation is recessive, so cats with both alleles of the gene will have a shorter tail than those with only one. Unlike Manx cats, the presence of two alleles for the gene mutation does not usually present health problems, nor does it affect life expectancy.

The Japanese Bobtail is characterized by having:

Japanese Bobtails are curious, outgoing, intelligent, playful, active and social cats. They are not overly vocal, but they are known for their need to communicate and express themselves. They will uses meowing of different tones to do so. They are strong and active, but their diet needs to be reflective of this. For this reason they often need to eat more than other breeds.

This breed appeared spontaneously in Arizona in the late 1960s due to a dominant genetic mutation. It is in no way genetically related to the Japanese Bobtail breed, although they resemble each other physically. Neither were they the result of mixing with another short-tailed breed.

The American Bobtail is characterized by their:

American Bobtails are generally a strong and healthy breed. They are playful, energetic, highly intelligent and affectionate.They are not very independent, but are adaptable to new homes and are even known to travel well.

The Kurilian is a breed of cat with a very short tail originating from the Sakhalin and Kuril Islands between Russia and Japan. They began their popularity in the late 1980s. It is thought that they were produced due to a crossing of Japanese tailless cats with Siberians.

Kurilian Bobtail cats are characterized by:

Kurilian bobtails are happy, intelligent, patient, docile, tolerant and very good hunters. They are especially good at catching fish, so they tolerate water better than other cat breeds.

They are a breed accustomed to extreme climates. They are strong in body and generally very healthy, but they will still need vaccinations, deworming and regular veterinary checkups.

This is a breed developed mainly in Russia with cats brought there from various countries in Southeast Asia. They are widely distributed in the latter area. They were created from the Siamese cat breed. While they can be comsidered tailless, some simply see them as short-tailed.

The physical characteristics of these tailless cats are as follows:

The Mekong Bobtail has a coat which presents in the same color point pattern as the Siamese. This means they have darker fur on their face and extremities. This is due to the temperature being lower at these points. They are almost silent with a very subtle meow. They have a good character and are affectionate, playful and intelligent. They can even learn commands and are alert to any possible prey in their environment.

They are generally a healthy breed, without genetic problems. They may manifest strabismus, an eye problem in cats where the eyes do not properly align. They will need veterinary checks to monitor their eyes.

Pixie bob cats originated in the Cascade Mountains of Washington during the late 1960s. Some experts believe that it is due to a cross between bobcats, domestic cats and American wild lynxes.

The physical characteristics of this feline breed are:

With regard to their character, they are very peaceful, calm, sociable, docile, affectionate, faithful and intelligent cats which love living indoors. Unlike other breeds of tailless cat, they do not show as much interest in exploring the outdoors, although they can tolerate walks on a leash.

The health of pixie bob cats is generally good, but females can suffer reproductive disorders such as dystocia at birth or cystic endometrial hyperplasia. Cryptorchidism (where one of the two testes does not descend) is more common in males ans both can suffer heart problems such as hypertrophic cardiomyopathy.

Not all tailless cats are officially recognized cat breeds. During the 1990s, a group of tailless cats were developed. Known as ‘lynx’ type cats, they are experimental breeds which are not as common as others. They are grouped into:

These are cats which resemble the wild lynx. What little tail they have is short and fluffy, but they have a strong appearance with a muscular and robust body. They have a fairly large head with a broad nose, strong chin and a beard. Their coat is of medium length, usually in different shades of red. They can get used to living in a home, but they must have outdoor access.

Also called a caracal, the desert lynx is more stylized than wild lynxes. They can reach up to 98 cm (39") in length and 50 cm (20") in length and 18 kilos in weight. They somewhat more resemble a bobcat than a lynx. They have black ears and patches of color over the eyes. They have whiskers on both sides of the snout and a black stripe from the eye to nose. Their eyes are large and yellowish and have a very athletic body.

They are white cats of medium size, with short tails and long or short hair. They are very similar to wild lynxes in appearance. Their head is medium to large and they have a well developed square muzzle. They have large and expressive eyes of various colors and ears with tufts at the tips that can be straight or curly. They also have tufts on their legs and paws.

This breed of short-tailed cat was developed in the United States by crossing the Desert Lynx breed with Jungle Curl to achieve the curly ears which define the latter. They are cats with short or semi-long hair and of different colors. They are of medium size, muscular and robust body and some are polydactyly. They have a long sloping forehead, wide-set eyes, a large, blunt snout and a broad nose. They are a very active, intelligent, affectionate and playful cats.

If you want to read similar articles to Tailless Cat Breed Types, we recommend you visit our Facts about the animal kingdom category.

Bibliography
Top 13 Australian Dog Breeds - With Pictures
5 Hairless Cat Breeds
All Types of Lynx Species with Characteristics
What Breed Is a Tortoiseshell Cat?
Related categories
Endangered animals
Most read
1.
What Animal am I According to my Zodiac Sign?
2.
10 Most Beautiful Animals in the World
3.
What Does It Mean When a Cat Shows Up at My Door
4.
The 10 Most Solitary Animals in the World
5.
Top 10 Smells Dogs Hate
6.
How Many Types of Lions Are There?
7.
Why do Dogs Get Stuck when Mating?
8.
My Female Dog In Heat Won’t Accept A Male - Causes
Different Types of Swans
All Types of Cougars
Most Popular Cat Breeds - With Pictures!
Different Types of Leopards
Peruvian Guinea Pig Facts
Types of Felines - Characteristics and Examples
Types of Tigers Around the World: Tiger Subspecies
Types of Water Birds 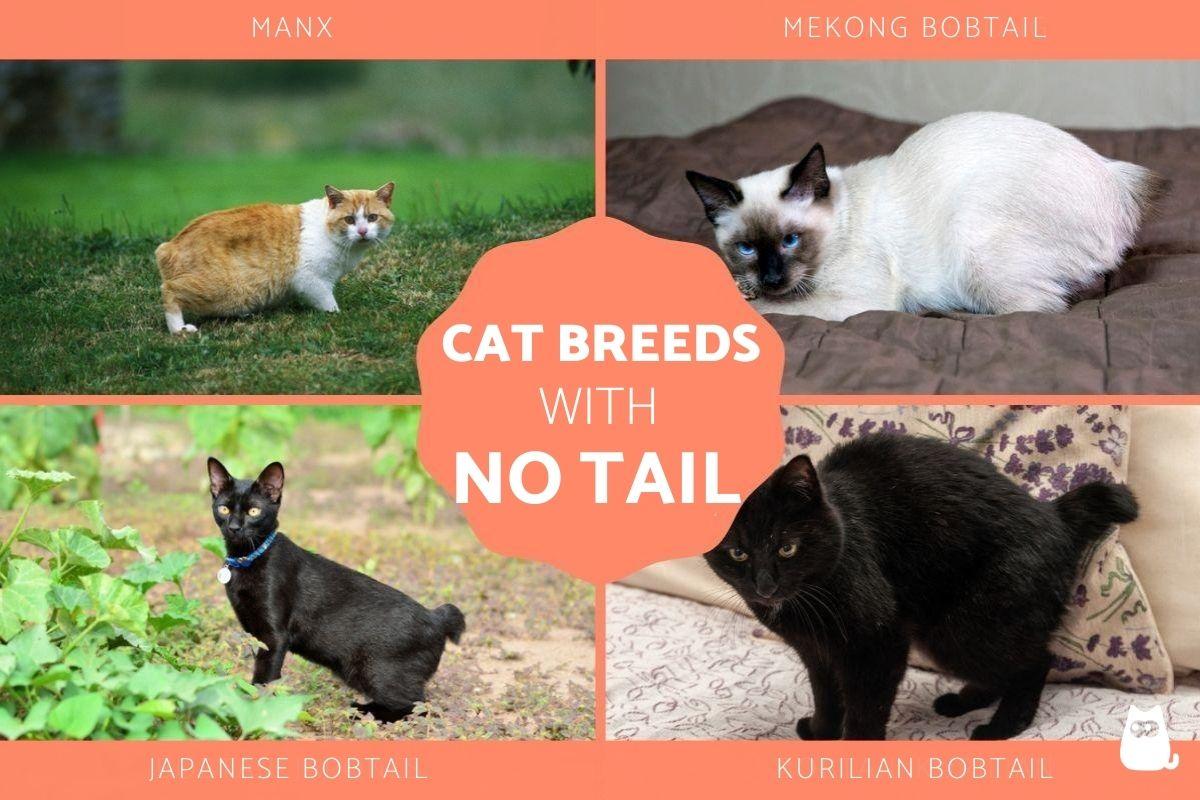 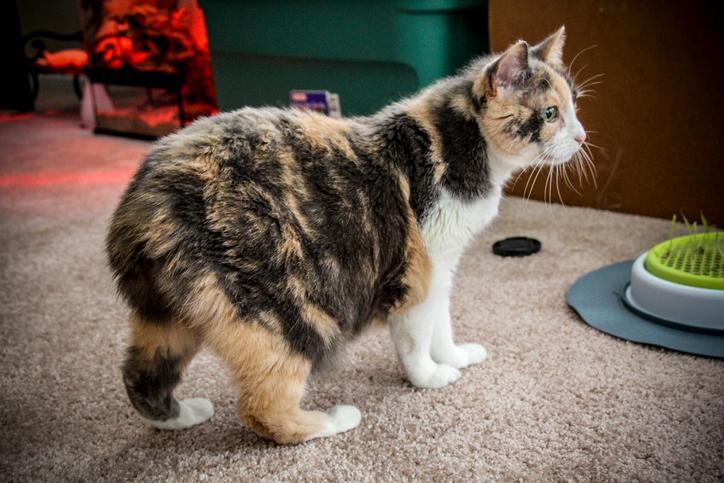 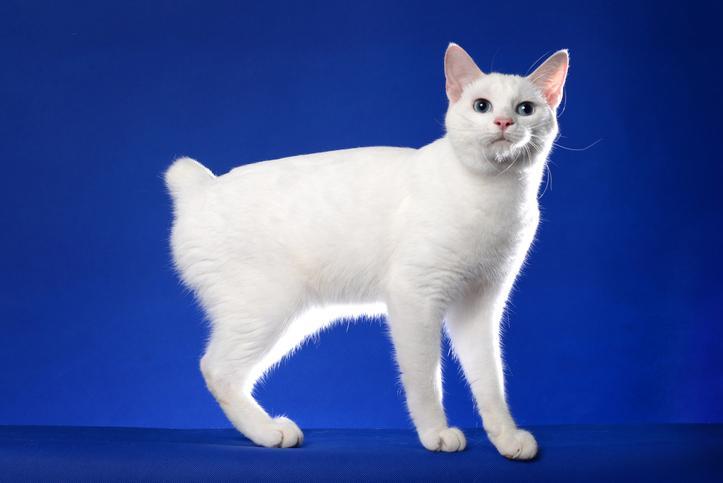 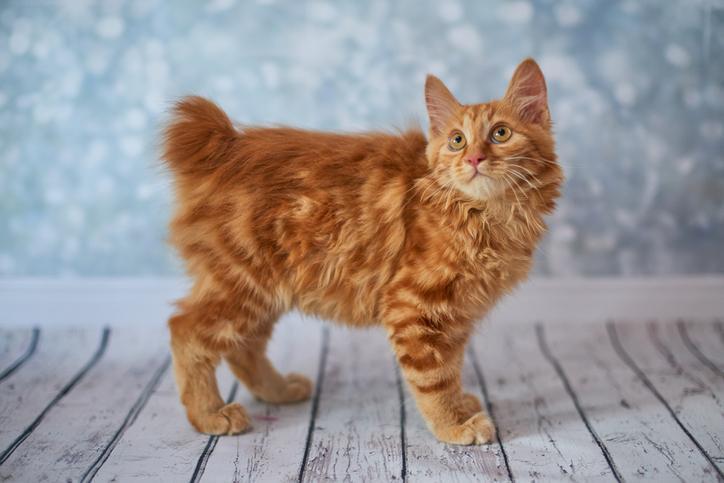 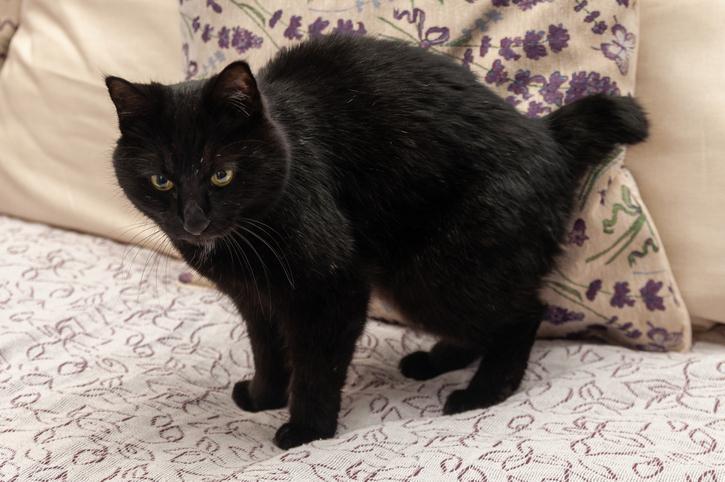 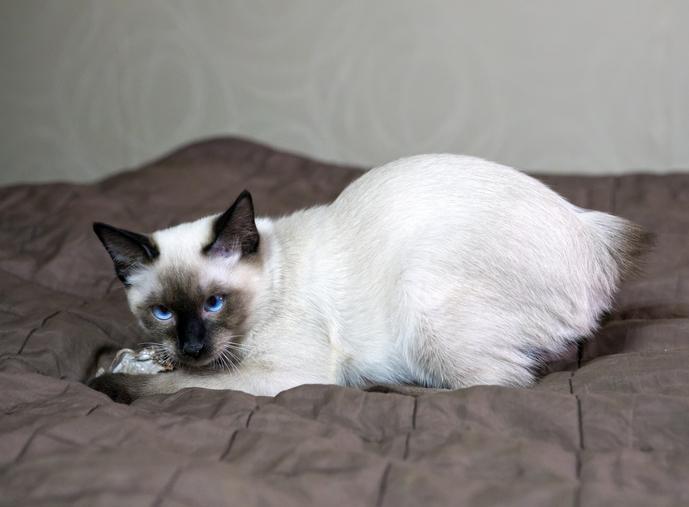 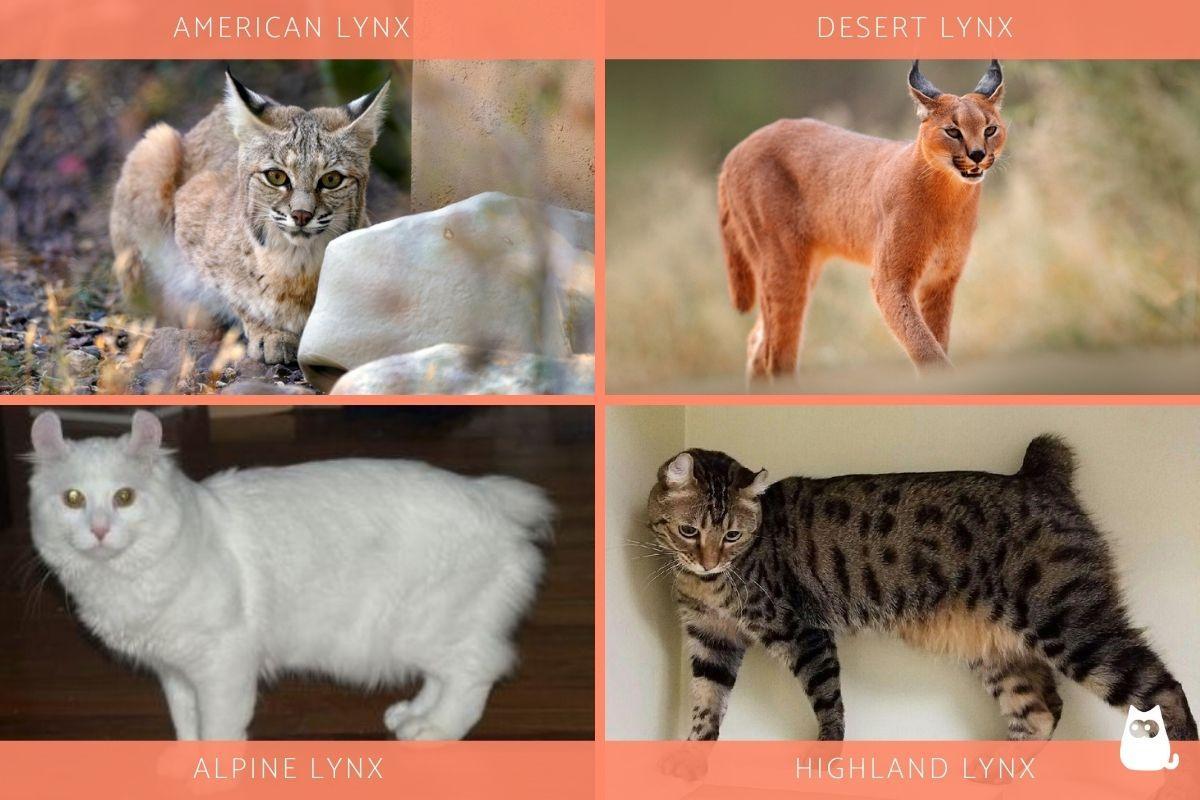 1 of 8
Tailless Cat Breed Types
Back to top