In October 2022, a virus was reported to be emerging among local pigeon populations of the United Kingdom. It was particularly notable for its symptoms which appeared to turn the pigeons into zombies. These headlines alarmed many readers, leading to various questions about its symptoms, contagion and other factors.

At AnimalWised, we find out the truth about the so-called zombie pigeon disease. Scientifically known as paramyxovirus, we find out its symptoms, its effects on affected birds and whether it is contagious to humans.

What is zombie pigeon disease?

The name of this disease sounds like it has been taken from a science fiction series, but it is firmly grounded in virology. Although recent reports have suggested a flare up of pigeon zombie disease, it is not a new pathology. While the symptoms are zombie-like, it is a disease derived from a virus which was first identified in 1926 and causes what is known as virulent Newcastle disease (VND).

News about this disease arose after the UK authorities confirmed the presence of the infection in populations of pigeons on the island of Jersey at the end of October 2022. After the appearance of the first cases, new agencies baptized the sick pigeons as ‘zombies’ due to effects the virus had on the bird's nervous system. Despite these symptoms of zombie pigeon virus, it is best to call it Newcastle disease. This is because the common name causes undue fear in humans.

Since Jersey is located in the English channel, there are fears of its spread to both mainland UK and the rest of Europe. Although there have been some reported cases in areas such as Spain, authorities have transmitted messages of calm. It is a disease with relatively few outbreaks in wild pigeons and is mostly limited to domesticated pigeon groups.

As mentioned above, the so-called zombie disease in pigeons is actually derived from virulent Newcastle disease. It is a highly contagious viral disease produced by a series of viruses from the Paramyxoviridae family. More specifically, it is from the genus Avulavirus. It is a disease that can affect all types of birds, both domestic and wild. In the specific case of pigeons, is caused by a variant of the virus known as PPMV-1 (pigeon paramyxovirus type 1).

How does zombie pigeon disease spread?

As stated above, Newcastle disease is a highly contagious viral disease for birds. The route of contagion of the virus can be both respiratory and digestive. Transmission generally occurs directly, through contact with respiratory secretions, feces or dead birds. It can also be transmitted indirectly, through contact with food, water or inanimate objects (fomites) contaminated by the virus.

The viruses responsible for Newcastle disease can survive for several weeks in the environment. This is especially so in cold and humid climates. It is for this reason outbreaks are more frequent during colder times of the year.

Not all pigeon species are affected in the same way. Find out more background with our article on the different types of pigeons.

Can the zombie pigeon virus spread to humans?

Although some news denies that Newcastle is transmitted to people, zombie pigeon disease is a zoonosis. This means it can be transmitted from animals to humans.

It is important to clarify this virus does not cause a serious disease in people. It commonly presents a form of conjunctivitis resulting in eye redness, tearing and eyelid edema. Flu-like symptoms may also be experienced. VND compromises neither the vision nor the life of an infected person and usually resolves on its own in a couple of days.

Newcastle disease caused by paramyxovirus can be considered to be a mild zoonotic disease. The general population is not usually affected. It usually only occurs in people who have close contact with the birds or the virus, such as farmers, veterinarians and laboratory personnel.

In addition to Newcastle disease, find out other diseases humans can catch from birds.

The clinical signs produced by pigeon paramyxovirus type 1 vary greatly. This is due to factors such as the viral load, the species affected, the age of the host (young birds are more sensitive) and the immunity status. Newcastle disease is characterized by producing three types of signs, respiratory, digestive and neurological.

In the specific case of pigeons, the clinical picture does not usually include respiratory signs. If they do appear, they are usually due to a secondary complication, rather than the viral infection itself. Fhe symptoms that can be observed in pigeons affected by paramyxovirus are:

Duration of disease in pigeons

Now you know its symptoms and contagion, you may wonder how long zombie pigeon disease lasts. Duration of the disease largely depends on the pathogenicity of the viral strain. Highly pathogenic (velogenic) strains produce clinical signs that worsen until death occurs within 3-9 days. With these strains, morbidity and mortality rates are usually very high (up to 100%). Strains of medium (mesogenic) or low (lentogenic) pathogenicity have lower morbidity and mortality rates. Birds in these latter cases can recover after the clinical signs abate.

Newcastle disease produces clinical signs similar to other diseases, such as avian influenza (bird flu). For this reason, the detection of compatible symptoms can make us suspect Newcastle disease. To confirm the diagnosis it is necessary to carry out laboratory tests. Samples of sick or dead birds must be taken and the following tests carried out:

Unfortunately, there is no specific treatment against Newcastle disease in birds. As a highly contagious disease, highly pathogenic strains usually cause the death of all infected pigeons. Despite the fact that it is not a treatable disease, there are methods for its control that are necessary to avoid the appearance of outbreaks or to limit its spread. In the next section we talk more in depth about the prevention and control of Newcastle disease.

As we have seen in the previous section, Newcastle disease is not treatable but it is preventable. To avoid the appearance of this disease or limit its spread, it is necessary to apply a series of prevention and control measures:

Although the reports of zombie pigeon disease are true, there is no great cause for alarm in the general public. We should avoid touching pigeons from the street anyway as there are various viral, bacterial and other problems which can be spread by these birds.

If you want to read similar articles to Zombie Pigeon Disease - Paramyxovirus Symptoms and Contagion, we recommend you visit our Infectious diseases category. 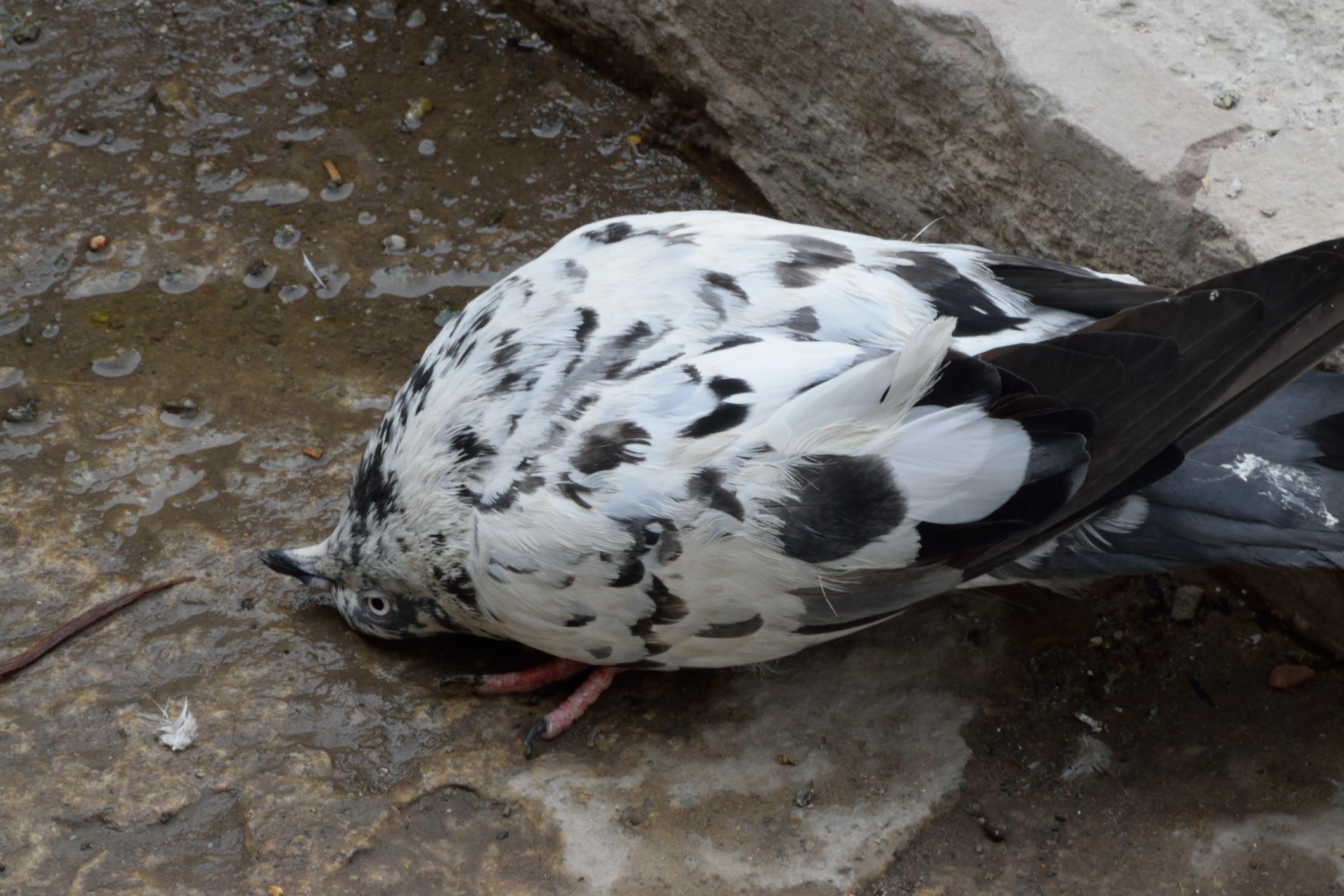 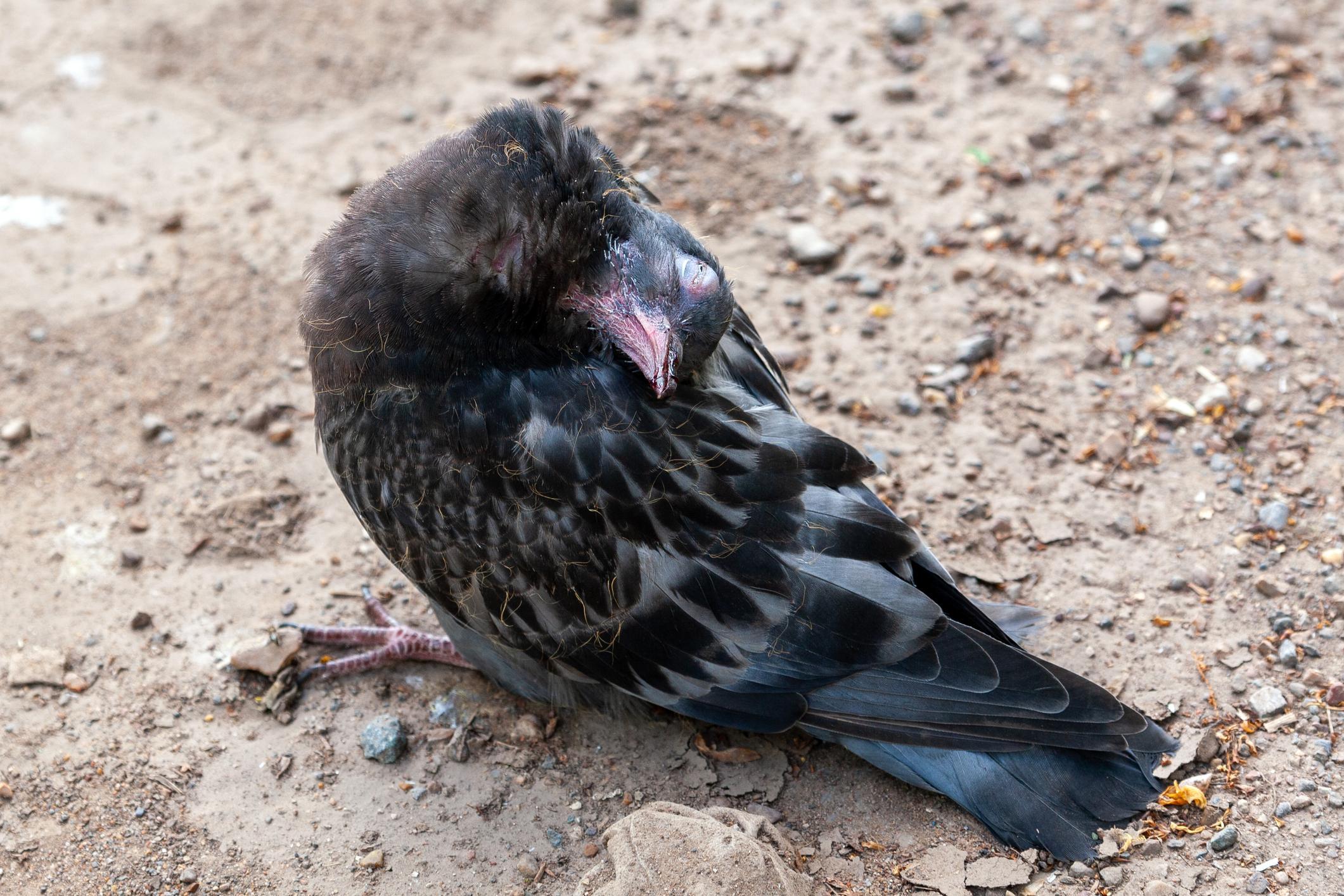