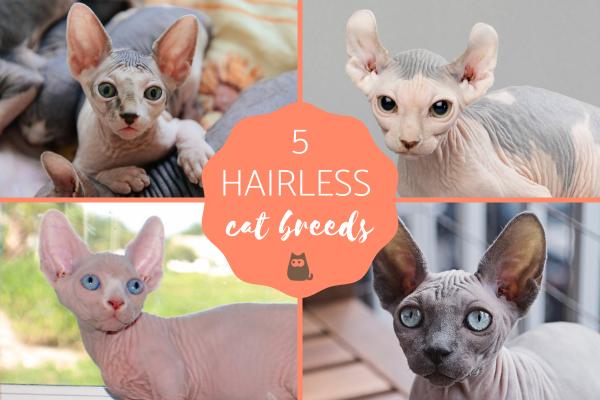 Are you a fan of hairless cats? In this AnimalWised article we're going show you 5 hairless cat breeds. We'll talk about each one of them, include a photo and even talk about the famous Elf cat and the recent Lykoi “werewolf” cat.

You may also be interested in: Top 5 Smallest Cat Breeds in the World
Contents

The most famous hairless cat breed in the world is undoubtedly the Sphynx. In fact, many people think that all hairless cats are Sphynxes, but that's not quite the case. The Sphynx originates from Canada in 1966, when a little kitten called Prune was born. However, it is said that hairless cats can be traced as far back as the Aztecs period!

As mentioned before, although they look completely hairless, they are actually covered in a fine layer of what feels like peach fuzz. Despite what some may think, because of their fine coat, they actually require thorough coat care. They are more likely than other breeds to accumulate dirt, have oily skin and sweat excessively. We also encourage you to learn more in our article about how to give a sphynx cat a bath.

The Sphynx's outgoing and friendly demeanor make them fantastic companions and more and more people are warming to the breed. As they say, you shouldn't judge a book by its cover!

The Donskoy is a hairless cat breed of Russian origin. They first came to be in 1987 when they were discovered in the Russian city of Rostov-on-Don by cat breeder Elena Kovaleva. They are often mistaken for the well-known Sphynx, but they have different genetic makeup. The Sphynx's hairlessness is due to a recessive gene, whereas the Donskoy possesses a dominant gene.

The Donskoy was first officially recognized by World Cat Federation (WCF) in 1997, and by The International Cat Association (TICA) in 2005. The standard describes the cat as being medium-sized and muscular, with large ears, almond shaped eyes and distinctive long, webbed toes. Like other hairless breeds, they require frequent grooming, in spite of their lack of coat. However, bathing them too often can cause their skin to become very oily.

According to the TICA's standards, the Bambino is still classed as an experimental breed, but are becoming more and more popular. Italian for “baby”, Bambino is an apt name for these adorable kitten-like hairless cats that were bred to remain small right through adult life. They were discovered in the United States in 2005, after crossing the Sphynx and the Munchkin cat - the latter which gives them their characteristic short legs and kitten innocence.

Like most Sphynx cats, Bambino cats are friendly, intelligent, and affectionate. They love to cuddle up to their family and get along well with children and other pets. Of course, only if children have been taught how to properly handle and treat animals. While we're on the subject, do you know the benefits of having a cat for children?

Hailing from Ukraine is the Ukrainian Levkoy Cat. The process to breed this hairless hybrid was led by Elena Biriukova in 2000. She crossbred Donskoy cats and Scottish Folds, the latter who give the Ukrainian Levkoy their unusual folded ears. It is said that their name was taken from the Levkoy plant which has leaves that resemble the Levkoy’s ears. They are folded forward and give them a sort of dog-like appearance. This is the biggest difference between the Sphynx and the Levkoy and a guaranteed way to help you identify the breed.

This Eastern-European breed is very new, in fact, they are so new they are not yet recognized by any International association. Find out more about this breed, as well as their fascinating origin, on our AnimalWised article.

Another Russian hairless cat breed, the Peterbald was introduced in 1994 in Saint Petersburg, after the crossing of a Donskoy and an Oriental Shorthair female. The thinnest of the hairless breeds, they have a narrow, long head, webbed feet and a long rat-like tail. Which, you may say doesn't sound the most attractive. However, these regal looking cats are highly sought after.

They were recognized by TICA in 2009, and have been gaining popularity ever since. They are known for their sweet, docile, peaceful and warm personality, much like hairless cats in general. Because of their parent the Oriental Shorthair, they often resemble a hairless Siamese. A striking specimen indeed!

We couldn't complete an article on the types of hairless cat breeds without giving at least a brief mention to the Elf cat and the Lykoi cat.

Although not accepted as a real breed and rejected by TICA to progress, this extremely rare hybrid was created by cat breeders Kristen Leedom and Karen Nelson. These breeders desired a cat that doesn't shed fur and possesses elf-like ears. So, crossbreeding the Sphynx with the American Curl achieved this - giving life to the new elf cat.

Despite not being accepted as a real breed, surprisingly, the elf cat has no major health issues and is free of genetic defects.

The Lykoi or werewolf cat is a partially hairless breed of cat with a unique aesthetic. This distinctive look is actually a natural mutation from a domestic short-haired cat, which was first acknowledged in 2015 in Virginia, United States. Their wolf-like appearance is why they are called the Lykoi, as this means “wolves” in Greek.

Genetic testing done at UC Davis confirmed that the Lykoi does not carry the Sphynx/Devon gene. The breed is now recognized as a Championship Breed and has been able to compete against other Championship breeds since May 2017, with TICA.[1]

All of these hairless cats are hypoallergenic cat breeds. However, as we have stated, this does not mean it is easy to look after this breed. They require maintenance such as frequent baths to remove the buildup of oil on their skin and their large ears that require regular cleaning.

The Sphynx has no hair to trap allergens from the saliva during grooming sessions, so it is a good choice for an allergic family with time to devote to their upkeep. Remember that these cats are more susceptible to feeling cold so be sure to take more care of them in winter.

To learn more about hypoallergenic cats, watch our video down below!

If you want to read similar articles to 5 Hairless Cat Breeds, we recommend you visit our Facts about the animal kingdom category.

References
Chinese Dog Breeds List
15 Rare Dog Breeds
Tailless Cat Breed Types
5 Things Your Cat Hates About You
Related categories
Endangered animals
Most read
1.
What Animal am I According to my Zodiac Sign?
2.
What Does It Mean When a Cat Shows Up at My Door
3.
The 10 Most Solitary Animals in the World
4.
How Many Types of Lions Are There?
5.
Animals With Scales - A Full List
6.
10 Smells that Attract Cats
7.
Differences Between Crows, Ravens and Rooks
8.
My Female Dog In Heat Won’t Accept A Male - Causes
What is the Origin of the Ukrainian Levkoy Cat?
5 Funny Things that Cats Do
Long Eared Domestic Cats
5 Fun Facts About the Red Panda
What Breed Is a Tortoiseshell Cat?
Top 5 Strategies to Find a Missing Cat
5 Reasons Your Cat Sleeps With You
5 Signs that your Cat is Bored 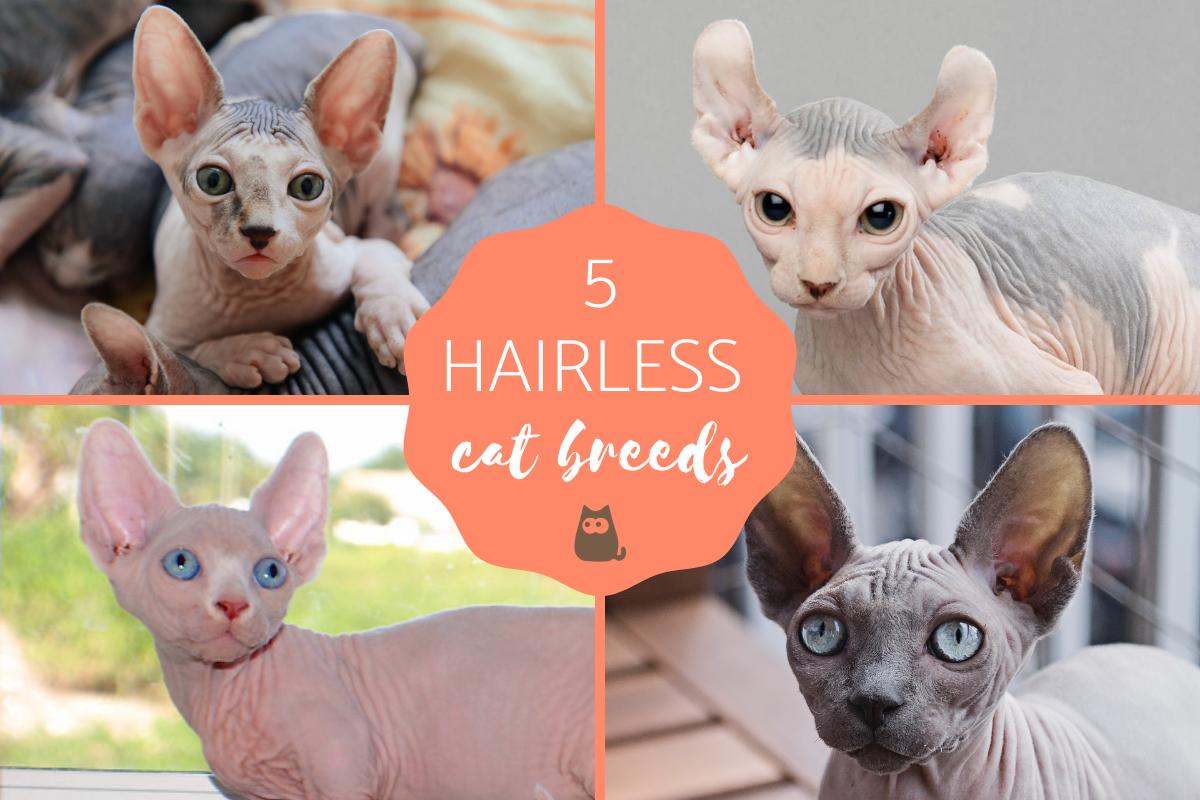 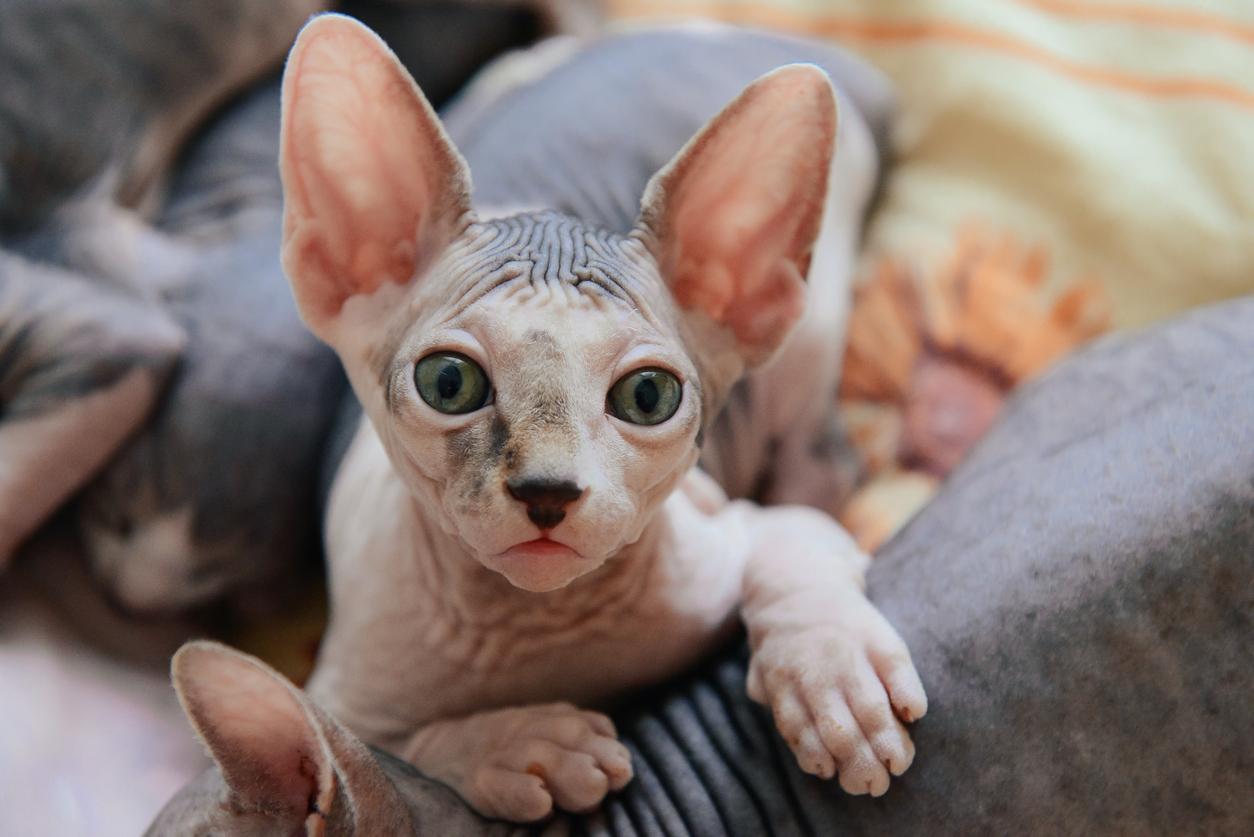 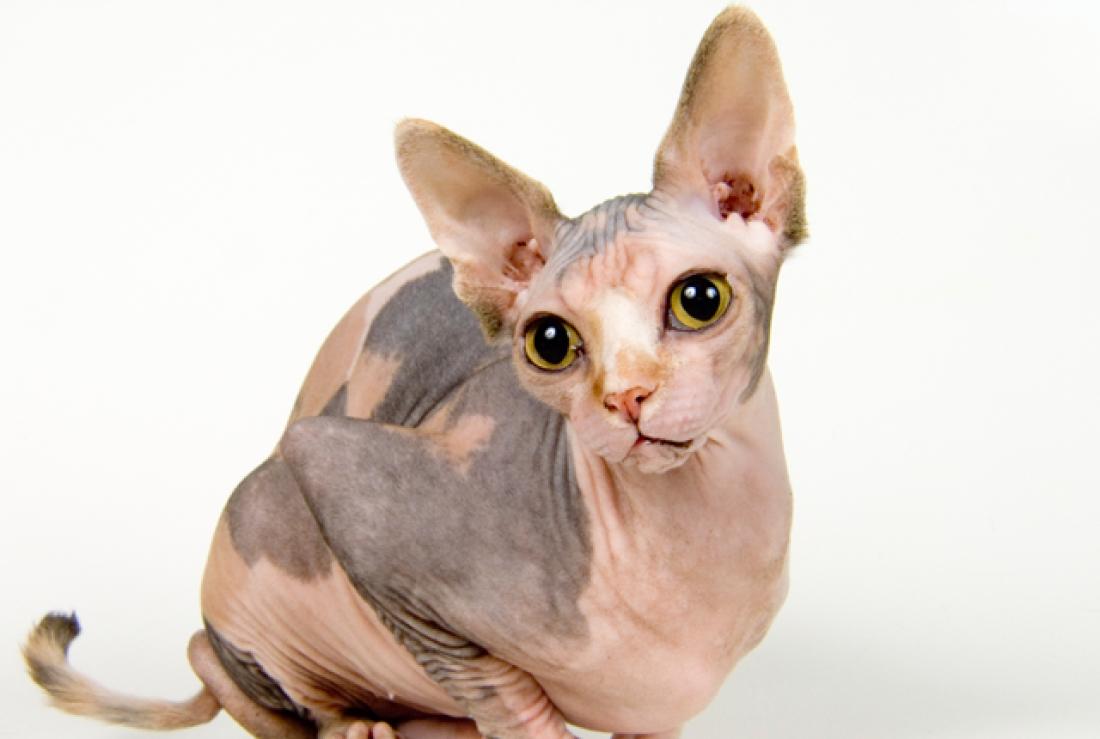 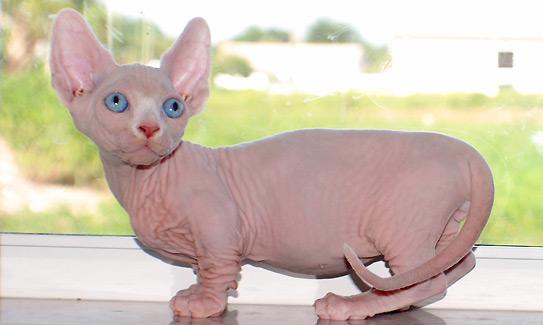 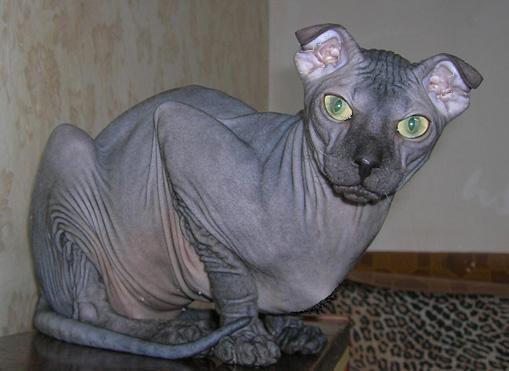 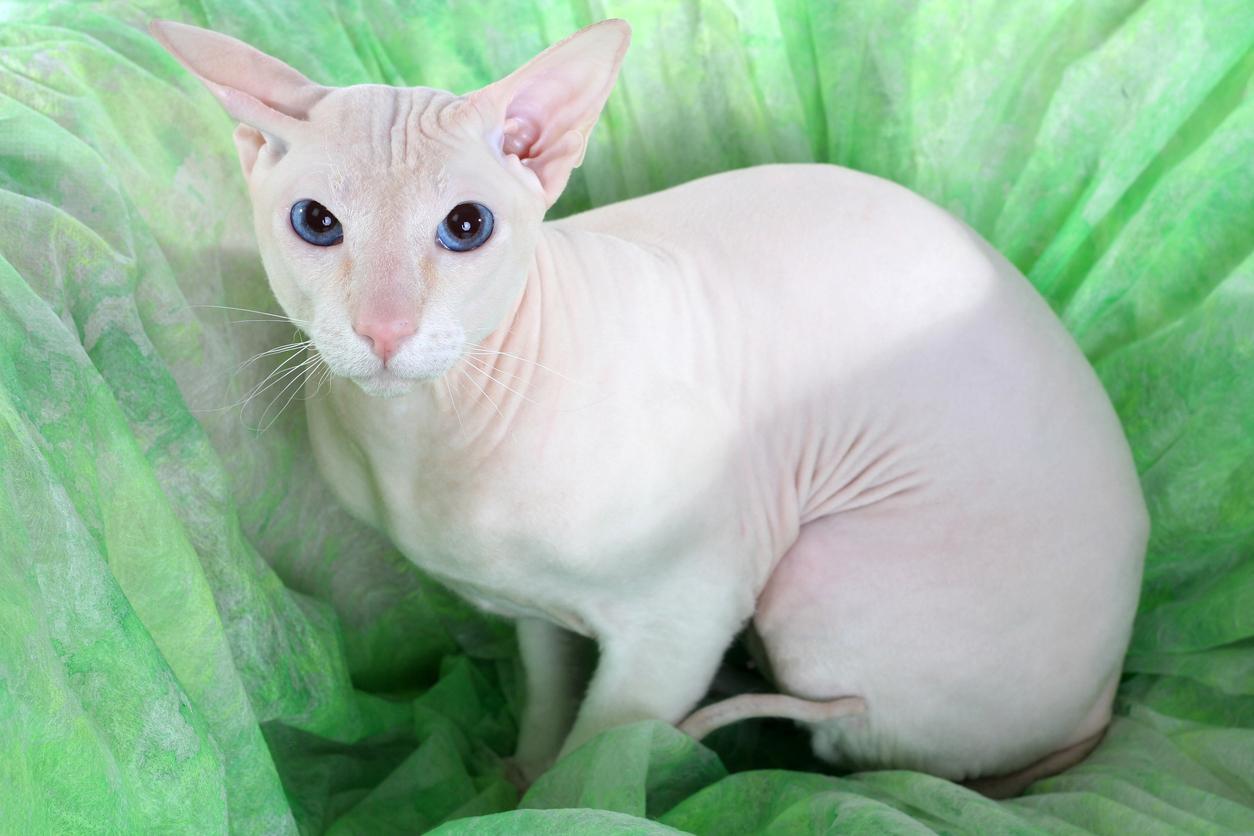 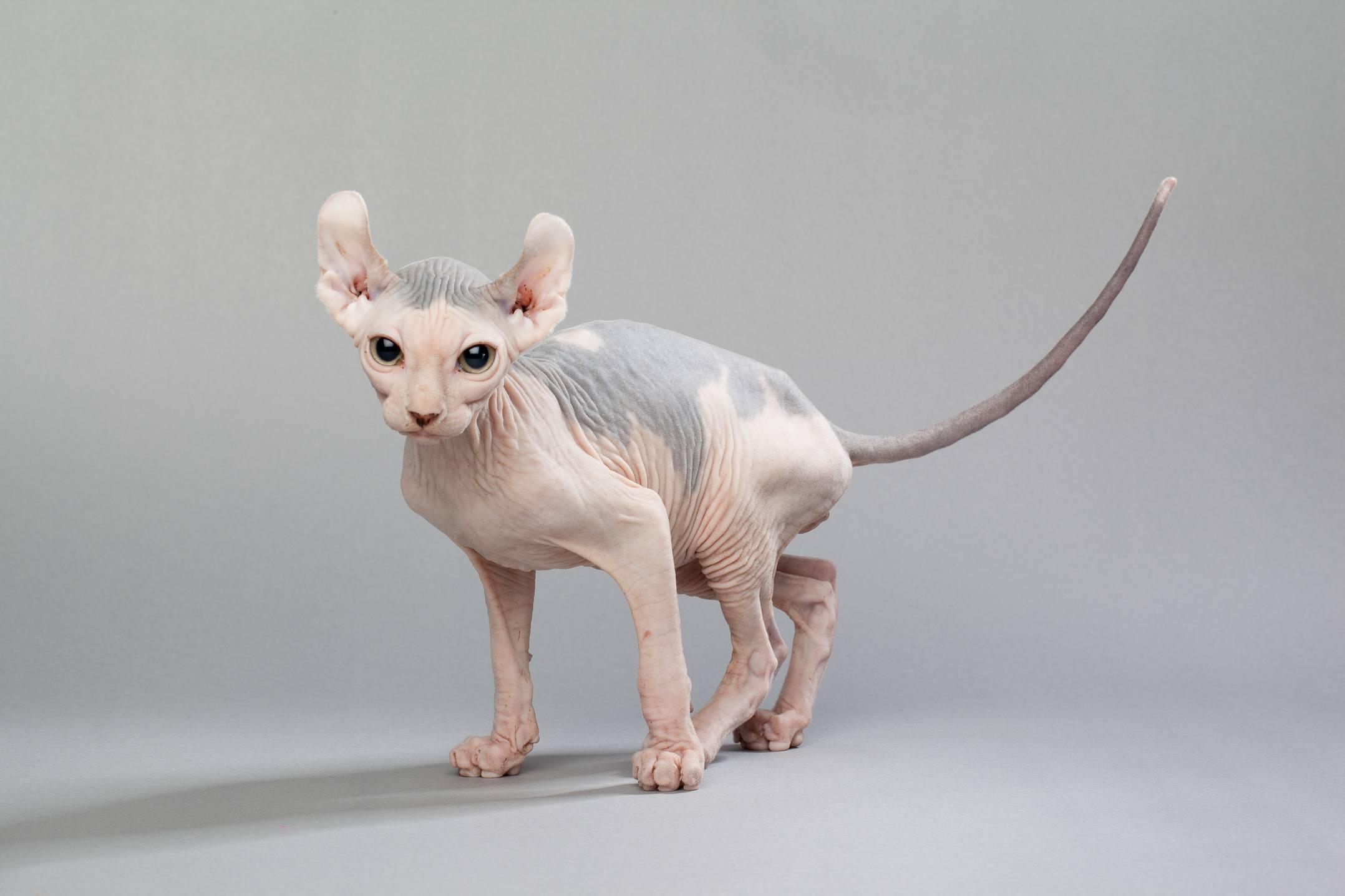 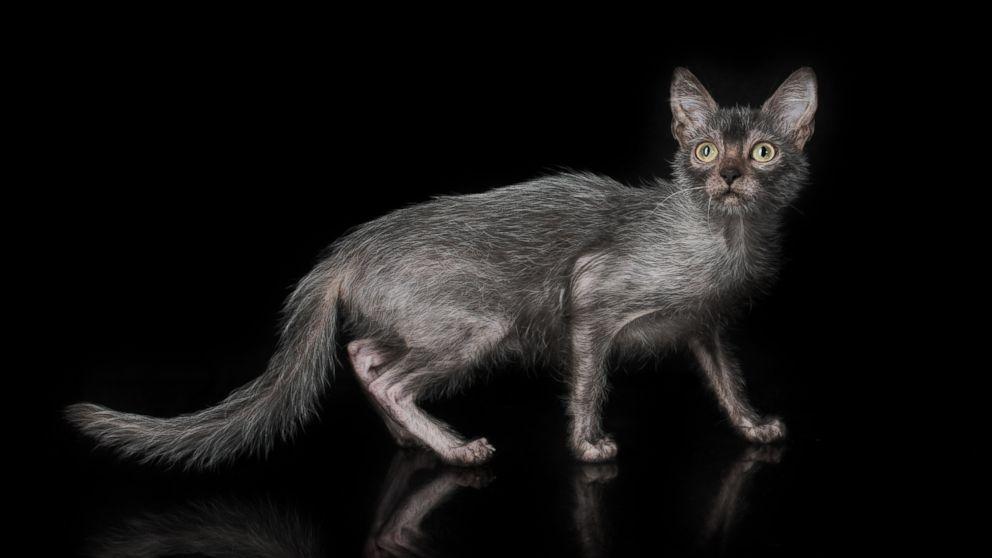 Image: abcnews.go.com
1 of 8
5 Hairless Cat Breeds
Back to top