Doberman VS. German Shepherd - What Are the Differences? 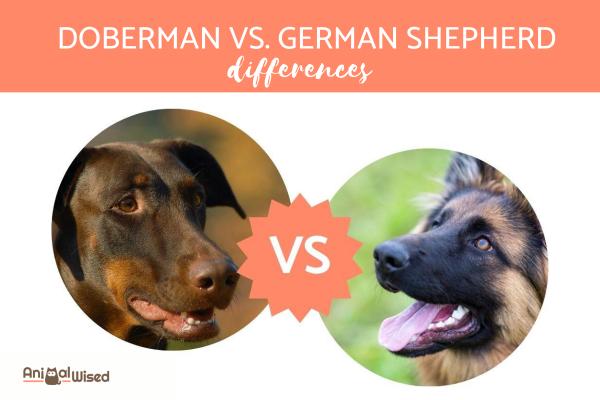 The German Shepherd and the Doberman are two very popular dog breeds thanks to their intelligence, loyalty and personality. However, when deciding what dog to adopt, it's very important to know more about their care, needed physical and mental stimulation, hereditary health problems to watch out for, etc. This way, you can know which breed would be best for you and your lifestyle.

You may also be interested in: Doberman Pinscher vs. Rottweiler
Contents

Origin of the German Shepherd and the Doberman

To better understand the personality of these dogs, it's important to go back to their origin. Let's start with the German Shepherd. The German Shepherd breed originated in the 19th century with the intention of having these dogs work herding sheep. The breed immediately exceeded this task and began working on other tasks such as assistance, security, police or military work, etc. They are also a great companion dog for any single individual or family as they are incredibly smart and loyal.

The German Doberman is another popular dog of German origin. Although it is not as popular as the German shepherd, it is still an overall popular choice. Its origin also dates back to the 19th century, but they weren't intended for herding sheep, instead, the Doberman breed was designed to be guardians, a task that they continue to carry out to this day. However, through the years they have also become well-known for being a great companion dog.

Physical characteristics of the Doberman and German Shepherd

It's easy to see the physical differences between these two dogs, simply by looking at them. However, we'll go into more depth so you know their average adult weight and heigh, as well as other aspects of their physical characteristics.

Before we get into each breed, it should be noted the Doberman has traditionally suffered the amputation of the tail and the ears. This practice, which is cruel and unnecessary, is fortunately prohibited many countries. This was done because, as a guardian, people wanted these dogs to have an aggressive and fierce appearance. However, they simply made the dog suffer an unnecessary amputation.

With this being said, let's get into the physical differences between the Doberman and the German Shepherd.

German Shepherds are large animals with a weight that can exceed 40 kg and a height at the withers of over 60 cm. They are more robustly built than Dobermans and their bodies are slightly elongated. They are widely distributed and have adapted to life in both the city and the country.

Although its version in black and tan is the best known, we can find these dogs with long and short hair and in different colors such as black, cream or sable. Likewise, their coat stands out for being double-layered. The inner layer is fluffy, while the outer is dense, hard and close to the body. The length can vary in each part of their body, for example, the neck and tail has longer hair is longer.

The Doberman is also large in size, very similar to the German Shepherd. It is somewhat less heavy, with specimens weighing between 30 and 40 kg, and somewhat taller with a height at the withers that almost reaches 70 cm. Therefore, he has a more athletic and muscular body conformation. In general, its appearance is finer than that of the German Shepherd, which tends to be more robust.

Like the German Shepherd, this breed has also adapted to life in the city, but they prefer temperate climates as they only have one layer of coat. Their coat is short, dense and hard and has no undercoat. As for the colors, although the best known Dobermans are black, we can also find them in dark brown, light or blue.

Character of the Doberman and German Shepherd

Perhaps in the character section is where the differences between Doberman and German Shepherd are minor. They are both intelligent animals that are also very loyal and protective of their family. They have traditionally been considered that the German Shepherd is better for living with children, but the truth is that both dogs can live with the smallest of the house without problems, as long as they have been well socialized and educated.

Starting with the German Shepherd, these dogs are excellent as companion pets and guardians. Thanks to their great intelligence and abilities, it is essential to offer them a good education, socialization and stimulation both physically and psychologically.

For its part, the Doberman is also a very quick learner. As a downside, we can point out that they may have problems with their peers, although these conflicts can also arise with German Shepherd or other dog breeds. In both cases, we insist, socialization, education and stimulation are key to having a healthy dog with a balanced temperament.

Perhaps one of the most obvious differences between the Doberman and the German Shepherd is the care of their coat, which is much easier in the case of the Doberman because they have a short coat. The German Shepherd will need more frequent brushing, especially if we have one with long hair. It must be clear that their hair will shed a lot.

On the other hand, in terms of the activity they need, both are dogs with considerable energy, but the German Shepherd is the one that requires the most amount of physical exercise. Walks are not enough, your German Shepherd must be able to run, jump and play, as well as take long walks.

With that being said, both breeds require a lot of exercise and mental stimulation. If you're thinking of adopting any of these breeds you must make sure you have enough time to care for them.

It is true that both breeds can suffer from problems due to their large size, such as stomach torsion or joint problems, but they have differences in terms of the diseases to which they are prone to. For example, hip dysplasia is more common in the German Shepherd.

Doberman dogs are prone to suffering from heart problems. On the other hand, German Shepherds, due to their breeding, suffer from eye and gastrointestinal disorders, among other health issues. In addition, this uncontrolled breeding has also caused behavioral problems in some specimens, such as nervousness, excessive fear, shyness or aggressiveness (especially when not properly educated or socialized). An excessively nervous character can also be detected in Doberman dogs.

The German Shepherd has a life expectancy of 12-13 years, very similar to that of the Doberman, which is around 12 years. Learn more about these dog breeds

If you want to read similar articles to Doberman VS. German Shepherd - What Are the Differences?, we recommend you visit our Comparisons category.

Videos related to Doberman VS. German Shepherd - What Are the Differences?

Doberman VS. German Shepherd - What Are the Differences? 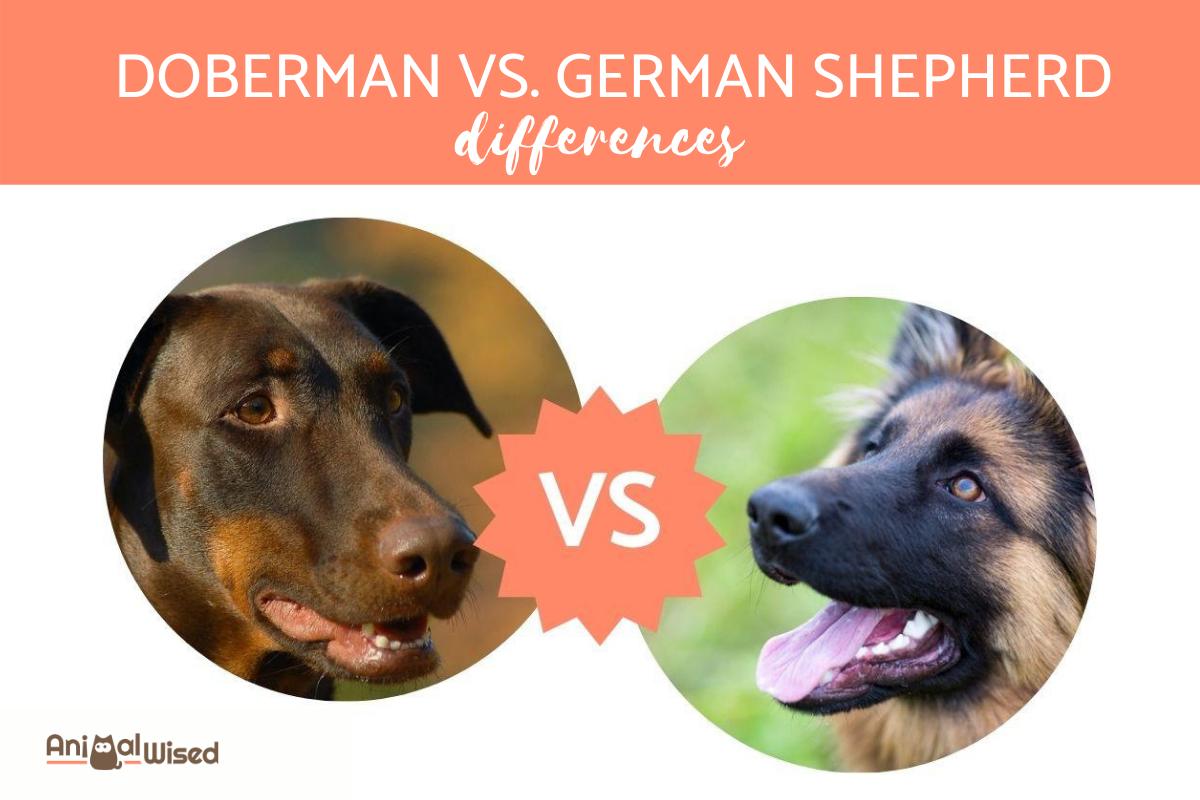 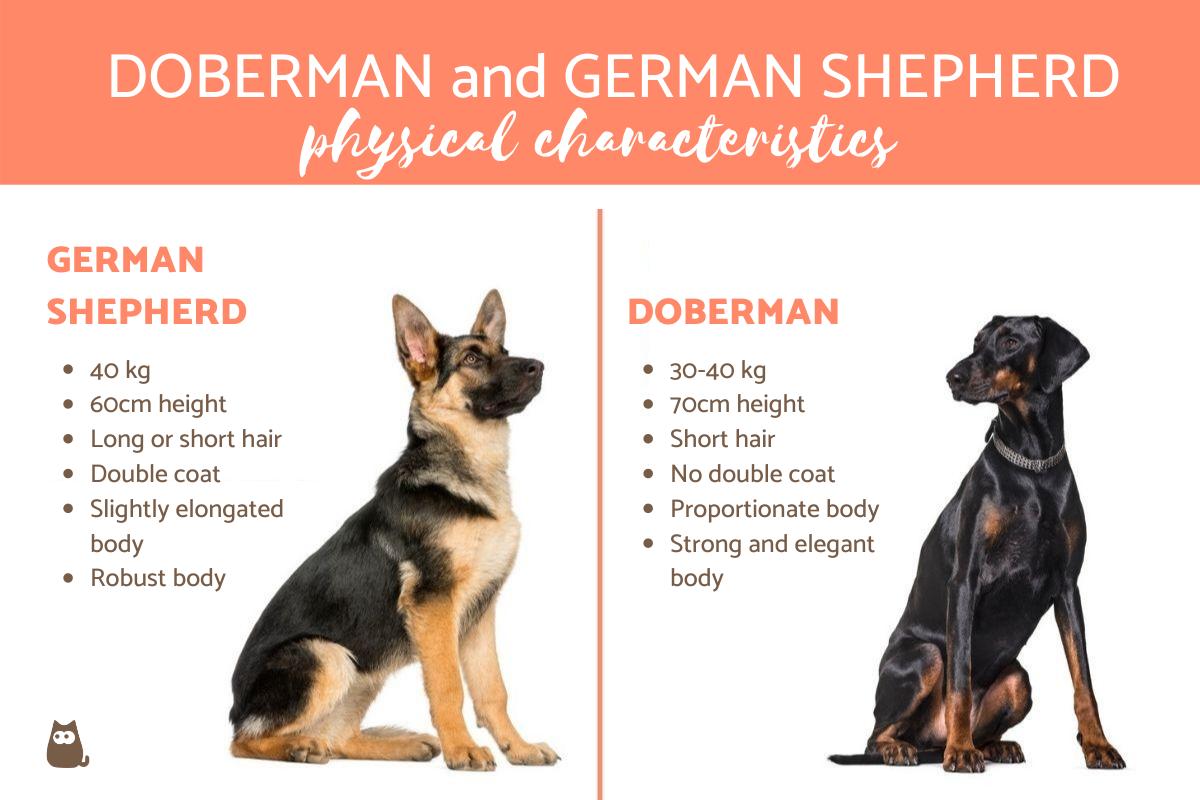 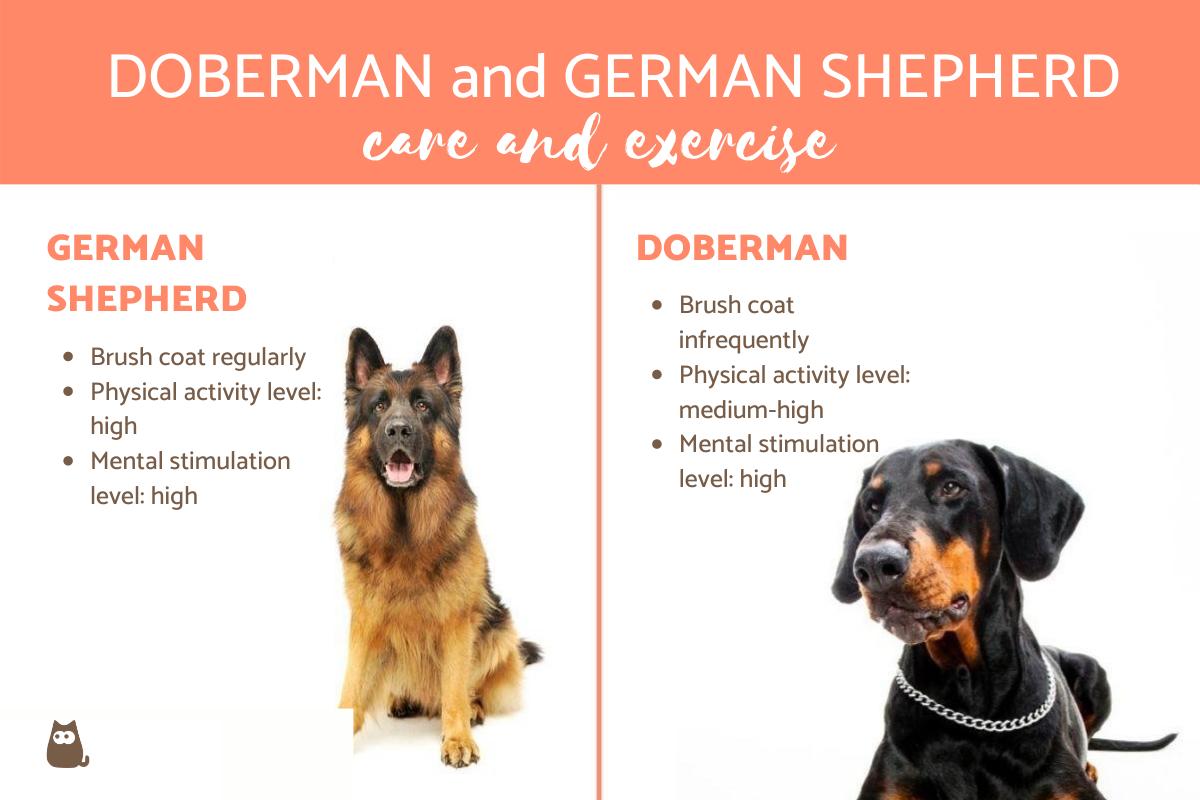 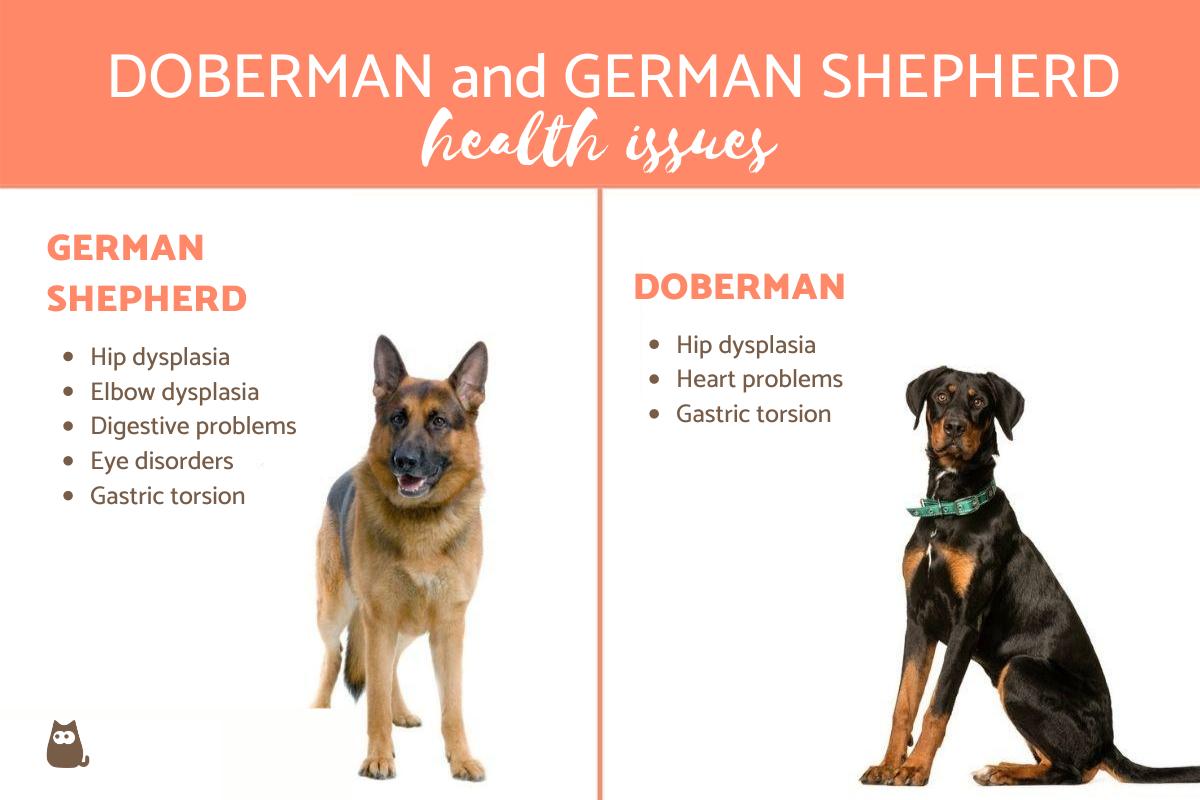 1 of 4
Doberman VS. German Shepherd - What Are the Differences?
Back to top