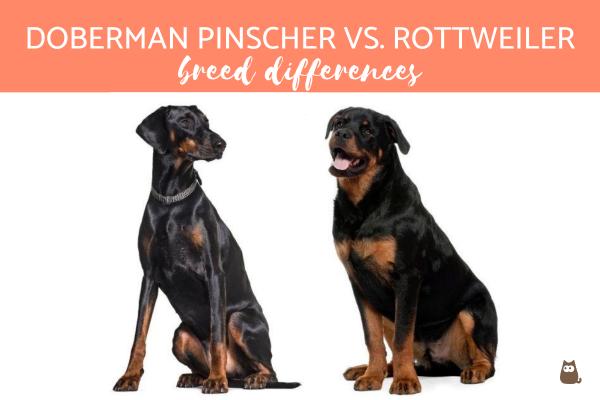 Many people seem to confuse the Doberman Pinscher with Rottweilers. Although very similar in appearance, these dogs are different in certain aspects. When deciding which dog to adopt, it's very important to know more about their breed in order to know which one is best for your lifestyle.

In this AnimalWised article we're going to explain the differences between the Doberman Pinscher and the Rottweiler. We'll be talking about their origin, physical characteristics, personality, care and more. Keep reading to learn more about these breeds!

You may also be interested in: Doberman VS. German Shepherd - What Are the Differences?
Contents

Origin of the Doberman and the Rottweiler

Before talking about the differences between Dobermans and Rottweilers, it is worth keeping in mind the basic traits of the two breeds. For this, we will need to start with their origins. Starting with the Doberman Pinscher, this dog is originally from Germany in the 19th century. At first, it was used as a guard dog, but today it is common as a companion dog in many families, although some people also train them as guard dogs.

For its part, the Rottweiler is another one of the most popular German breeds. Like the Doberman, it also emerged in the 19th century in Germany. In its origin, it was designed as a guard dog for livestock and property. Currently, they remain as a guard dog, but it is also common to find them as a companion dog or even performing assistance tasks, such as for the police. Rottweilers are known, not only for their strength, but also for their intelligence.

Physical characteristics of the Rottweiler and the Doberman

Although some people can confuse these breeds with one another, due to the similarity of their coat, they differ even in their physical characteristics. Let's take a look at the characteristics of each one below to understand the differences between Dobermans and Rottweilers.

The Doberman is a very intelligent dog with a great capacity for learning. Regarding their appearance, they are large in size and with an athletic build. Their weight ranges between 30-40 kg and their height at the withers is between 65-69 cm. At first glance, they are a much finer and elegant dog than the Rottweiler, this being one of their main differences.

On the other hand, their short and shiny coat is in the colors black and tan or brown and tan, in different shades of brown. Learn more in the Doberman Pinscher breed sheet.

The appearance of the Rottweiler is more robust. Although both are large dogs, the Rottweiler shows a stronger and more muscular complexion, as well as a very wide skull and neck. Thus, the Rottweiler usually reaches, and even exceeds, 50 kg in weight. Regarding their height, they are somewhat shorter than the Doberman, as they measure about 58-69 cm at the withers. Although there will be specimens as tall as the Doberman, others can measure much less.

The Rottweiler's coat is also short, but its color can only be black and tan. Learn more in the Rottweiler breed sheet.

Both dogs have a very strong and fierce appearance, which is why they were used as guard dogs. In fact, many people even force these dogs into cruel and unethical dog fights, when truly, like any other dog breed, they want to be loved and cared for, not forced to fight for their lives. Another unethical practise is the amputation of their ears, a practise done to give them a more scary look, but that simply makes the dog undergo another cruel practise.

This is what may lead people to hesitate when adopting these breeds. However, it's important to confront these myths and assumptions. So, let's dive into the question:

Are Dobermans and Rottweilers dangerous dogs?

Just like any other dog breed, when properly socialized, trained and cared for, these dogs are not dangerous. They will be kind, loving and have a balanced temperament. However, you must have enough time to care for these dog breeds as they are very active and intelligent animals that will need caregivers that can stimulate their mental and physical needs.

With that being said, due to their history of being forced into illegal dog fights, these breeds can be on the list of potentially dangerous dogs in certain regions or countries. This means that a series of requirements are requested for their possession and maintenance that must be assessed before considering adopting any of these copies. Check if your country or region has any requirements before adopting this breed.

Rottweiler or Doberman- which is best as a guard dog?

Traditionally, both dogs have been associated with property defense as a guard dog. It is not unusual to find specimens of both breeds living on farms or in factories, alone and in the open, with the aim of deterring potential intruders. However, in general, there are differences between Dobermans and Rottweilers in this respect, since it is considered that the Rottweiler has a greater inclination towards this activity of guarding and defending property.

They are also better adapted to inclement weather, although it should be noted that no dog, whatever breed, can replace a security alarm. All of them are social animals that need family coexistence for their overall well-being. They cannot always be alone. Nor can we expect a dog to perform defense work or, in general, any other work, without adequate and professional training.

The short coat of the Doberman Pinscher requires little care for its maintenance. On the other hand, it does not offer excessive protection against inclement weather, so it is not a very suitable breed for life in the open. In fact, its large dimensions have not prevented it from adapting to living in apartments in the city. As for coexistence, it may have some conflicts with other dogs if not properly socialized. Therefore, make you you properly socialize these dogs from a young age to avoid behavioural issues in the future.

In certain aspects, such as in the care of the coat, the possibility of adapting to life in the city, the sometimes problematic relationships with other dogs and the need for socialization and education, Dobermans and Rottweilers do not differ. However, where they do differ is that of the level of physical activity they need in order to achieve a healthy lifestyle. Whereas the Doberman Pinscher needs medium to high amounts of physical activity, the Rottweiler will need even more time and intensity when it comes to their physical exercise.

In general, as these two breeds are large dogs, they will share the propensity to suffer some disorders, such as stomach torsion or joint problems. But there are also differences between Dobermans and Rottweilers in this regard. Thus, the Doberman has a tendency to suffer from heart problems. In the Rottweiler, on the other hand, its tendency to be overweight stands out. Hence the need to exercise them enough or not overindulge them with food.

On the other hand, Dobermans used to have their ears and tail amputated. The Rottweiler only had its tail amputated. Fortunately, this practice, is increasingly prohibited in more countries. In addition to the pain that dogs suffer during the postoperative period, their communication is seriously affected, since it is essential for them to identify the different positions that both the tail and the ears adopt.

If you want to read similar articles to Doberman Pinscher vs. Rottweiler, we recommend you visit our Comparisons category.

1 of 3
Videos related to Doberman Pinscher vs. Rottweiler
Types of Doberman Pinscher - All Breed Variations
Types of Pinscher Dogs
Cavapoo vs Cockapoo
English Greyhound vs Spanish Galgo
Related categories
Ideal forWhat you need to knowThe most...The least...Names
Most read
1.
Best Names for American Bully Dogs
2.
Can You Have an Otter as a Pet?
3.
Tamil Names for Dogs - With Meanings
4.
Top 100 Popular Bird Names
5.
Best Names for Horses and Mares
6.
Small White Dog Breeds
7.
50 Unique Names for Parrots
8.
The 5 Most Wrinkly Dog Breeds
Differences Between a Persian vs. Angora Cat
Male Vs. Female Cats - Which Should I Adopt?
How are Dogs Classified into Types and Groups?
Pet Rabbit Breeds: Pictures and Descriptions
Setter Dog Breed Types
Top 6 Short Haired Small Dog Breeds
Indian Breeds Of Dog List
Differences Between a Shiba Inu and Akita Inu 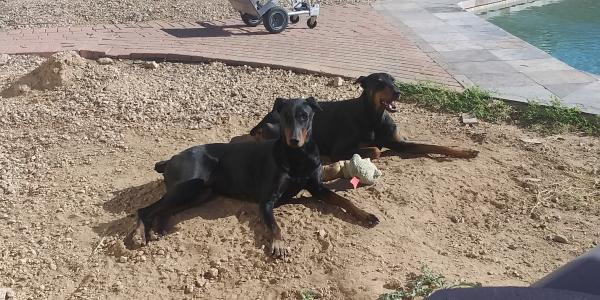 I really loved your article. I am glad you mentioned the ear cropping and tail docking as a cruel procedure, because it is. I have owned Dobermans my entire adult life. I have never owned a Rottweiler. I will say I agree with the other comment. They are high energy dogs and really need a high level of exercise or they will be prone to separation anxiety.
Rating:
Camila
19/07/2021
I think you’re wrong. Breeder here. Dobbies have more energy than rotties. Rottweilers are better in temper.
Doberman Pinscher vs. Rottweiler 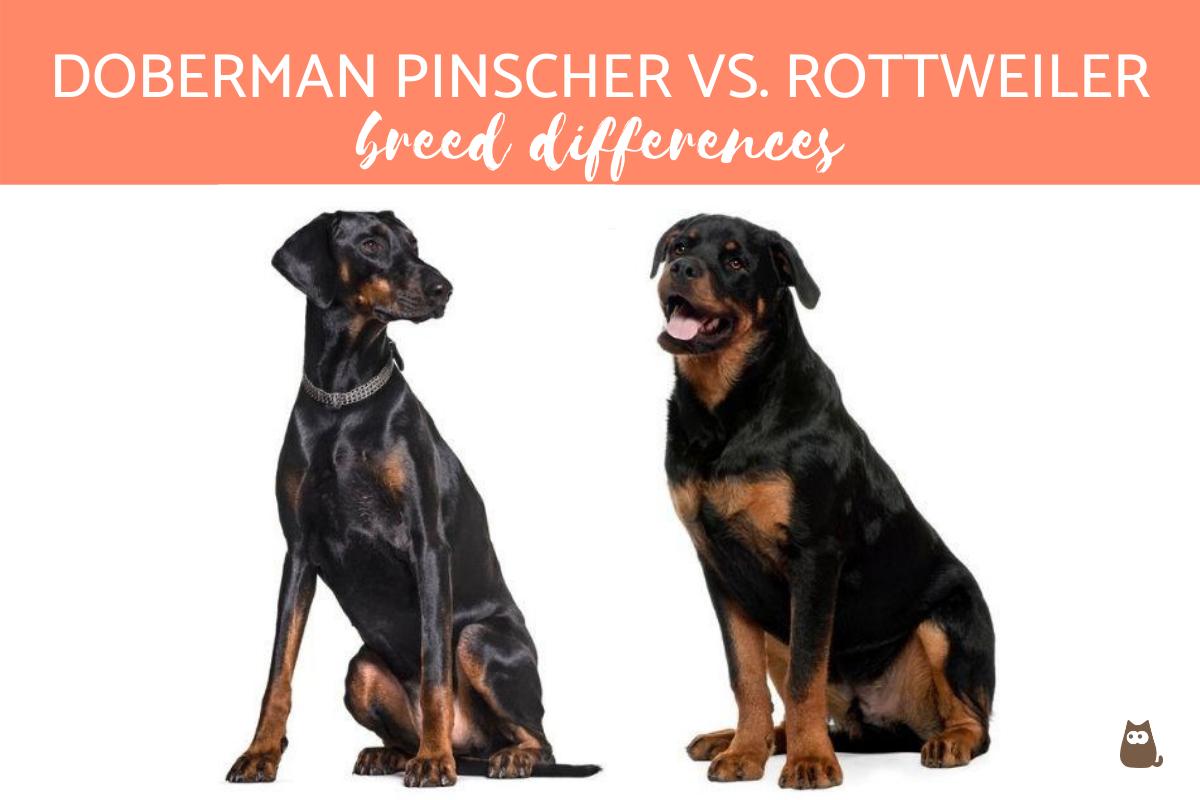 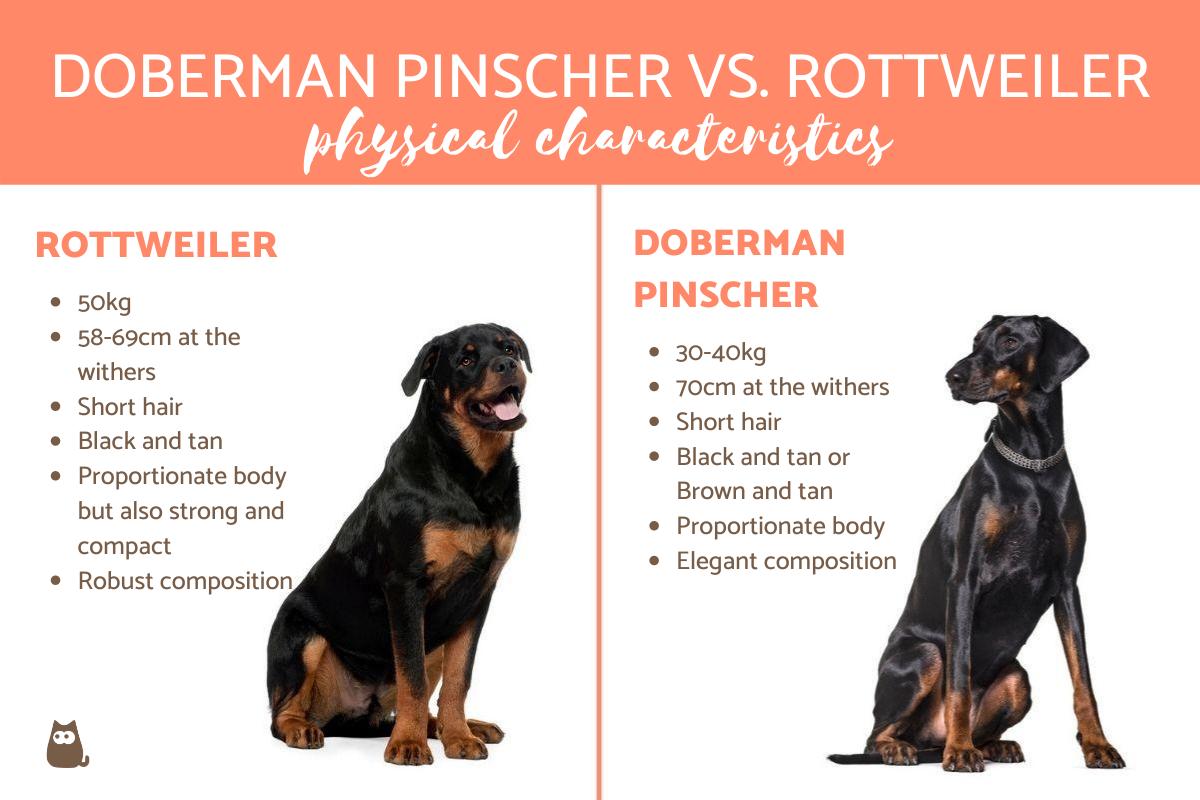 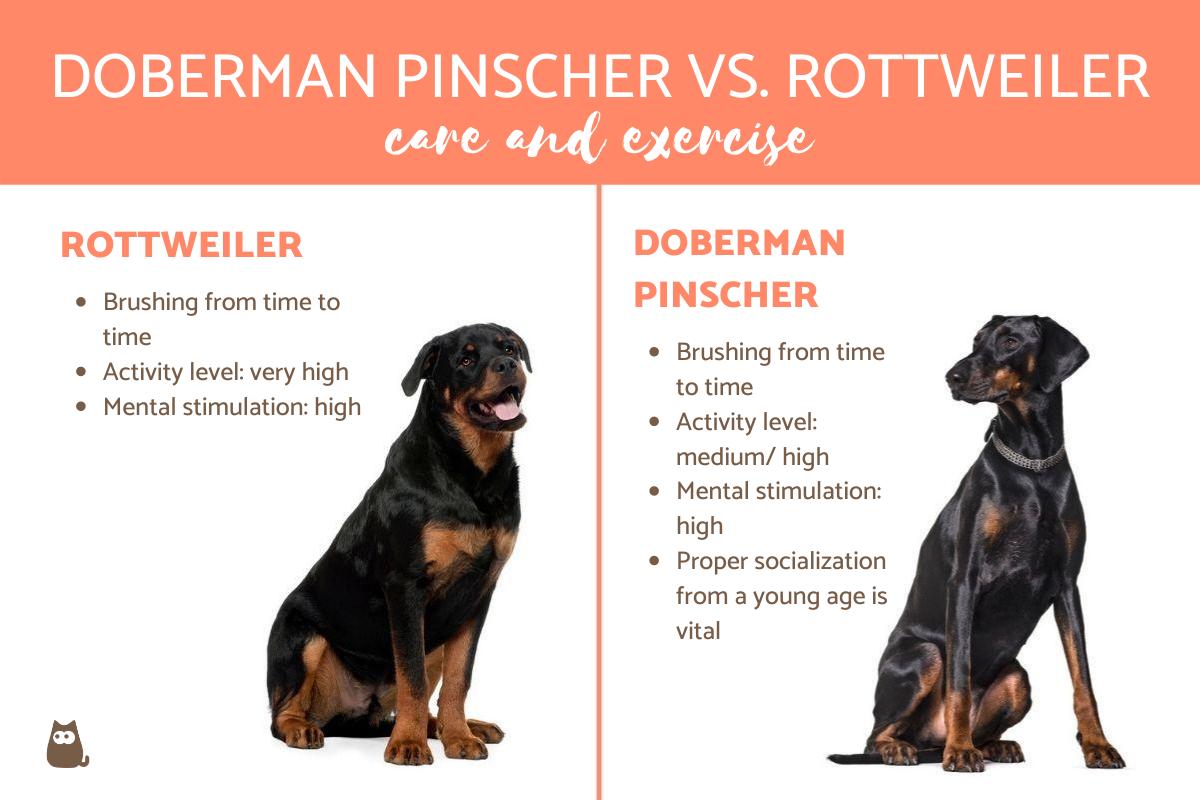 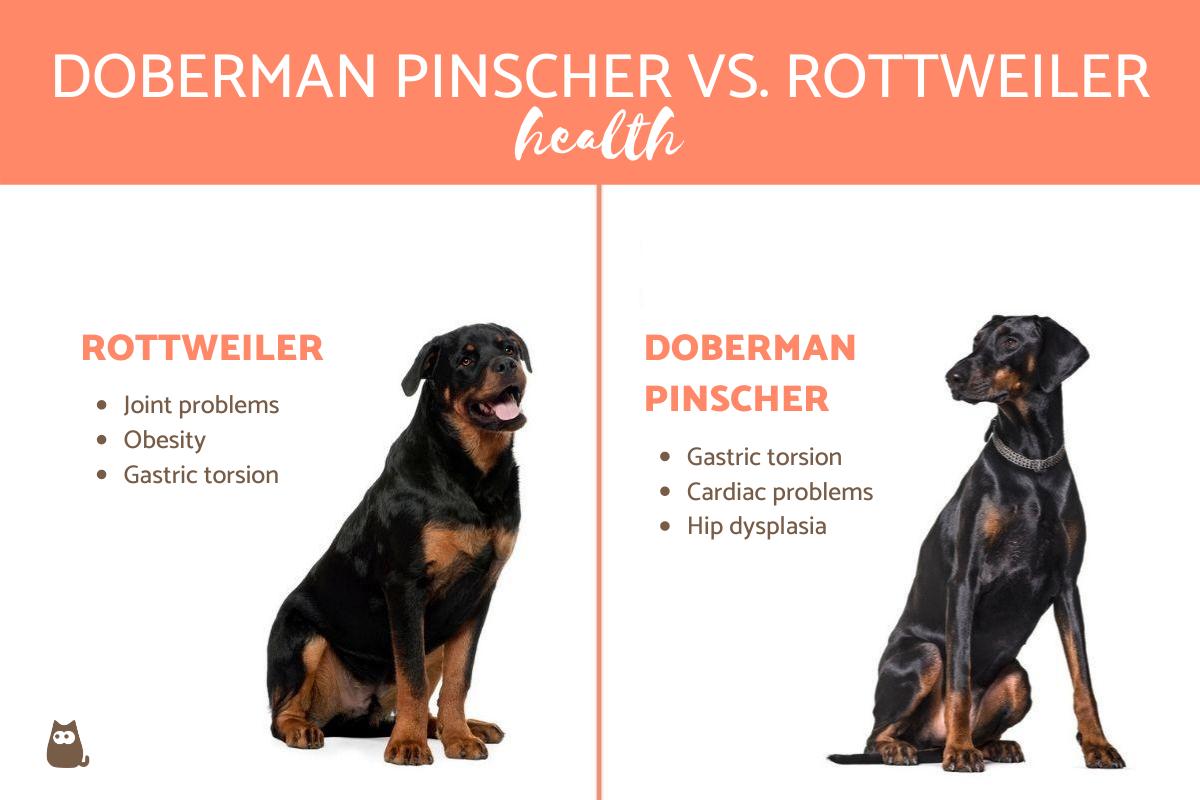 1 of 4
Doberman Pinscher vs. Rottweiler
Back to top