By Nick A. Romero, Biologist and environmental educator. September 8, 2022

Birds are warm-blooded vertebrates that walk, hop, or stand only on their hind legs, while their front legs have evolved into wings, which enable them to fly in most cases, although not all of them do. Birds are descended from bipedal, carnivorous Jurassic dinosaurs that lived 150 to 200 million years ago. In fact, they are the only dinosaurs that survived the mass extinction at the end of the Mesozoic Era.

In this AnimalWised article, we talk about living and extinct prehistoric birds, their relationship to dinosaurs, and show specific examples.

You may also be interested in: The Origin and Evolution of Animals
Contents

How did birds evolve?

Birds are the last surviving lineage of dinosaurs. Their evolution can be broadly classified into prehistoric birds and modern birds. Prehistoric birds evolved in the Jurassic period, 200 to 150 million years ago, from theropods, a group of bipedal carnivores that included the colossal Tyrannosaurus rex and the graceful Velociraptor.

These prehistoric birds almost all still had teeth and claws on their wings, but otherwise outwardly resembled modern birds. Their classic small, light, feathered, and winged physique developed gradually over tens of millions of years of evolution rather than in a single burst of innovation.

Early birds diversified during the Jurassic and Cretaceous periods and evolved into capable flyers with superior growth rates, but were decimated during the extinction at the end of the Cretaceous along with their close relatives, the dinosaurs. After the mass extinction, there was an explosive diversification of modern birds (members of the crown group of birds), culminating in more than 10,000 species now distributed worldwide.

The emergence of ducks, cuckoos, hummingbirds, and other modern forms of birds seemed a classic case of evolutionary radiation in response to the displacement of ecological niches by an extinction event. In this case, the niches had previously been occupied by dinosaurs, pterosaurs (flying reptiles), and archaeal birds. It is believed that birds were able to survive this catastrophic event primarily because they were smaller than dinosaurs, because their diet was more diverse and therefore more adaptable, and because they could fly.

New techniques of paleontological analysis have made it possible to reconstruct the evolution of the birds' distinctive anatomy. The results suggest that bird features evolved gradually over several million years, albeit for very different purposes than they do today.

Birds have characteristics that distinguish them from other vertebrates. In addition to the characteristics that enable them to fly, their metabolism allows them to grow very quickly and their large brains give them high intelligence and good senses. They are so different that their origin has long aroused the curiosity of naturalists.

If you want to learn more about birds, do not miss this other article where we talk about birds that do not fly.

Are prehistoric birds related to dinosaurs?

Numerous fossils of feathered dinosaurs have been found, demonstrating the drastic transformation of these terrestrial giants into graceful birds of flight that we know today.

As mentioned earlier, birds have evolved from dinosaurs and are therefore dinosaurs, just as man is a kind of mammal. Specifically, birds evolved from a group of carnivorous dinosaurs called theropods, the same group to which Tyrannosaurus rex belonged.

The first birds were in fact more like small dinosaurs than they were like any bird today. Their mouths still contained sharp teeth. But over time, the birds lost their teeth and developed beaks. Although their ancestors were carnivores, they later diversified their diet to omnivores or herbivores.

When comparing theropod bones, it can generally be said that the first birds reduced their size over a period of about 50 million years. They also developed larger breasts and stronger feathering, which allowed them to grow wings.

These prehistoric birds developed the same flight strategy as modern birds. Many small modern species can fly by flapping their wings continuously and following a straight trajectory. However, if they want to optimize their flight efficiency, whether to increase speed or fly long distances, they have to change their strategy. They did this by alternating periods of wing flapping with others in which the wings fold with the body.

If you want to learn more about birds, do not miss this other article, where we discuss the different types of bird feet and their functions.

Now that we know that present-day and extinct prehistoric birds are indeed descended from dinosaurs, let us get to know some species of these extinct species a little better:

This was a flightless bird, endemic to Australia, that lived thousands of years ago. It is considered one of the largest birds that ever existed, weighed between 450 and 600 kg and its head was more than half a meter long. Despite these features, he had a tiny brain, compared to the size of domestic chickens or sparrows.

This species corresponded to one of the largest flying prehistoric birds that ever existed. Its remains were found in Chile and allowed to describe that the animal had a wingspan between 5.25 and 6.10 meters.

It lived about 7 million years ago. In addition to its size, the presence of bony projections on the beak, simulating teeth, stands out. On the other hand, its pelican-like appearance is described.

This prehistoric bird is related to the ancestor of both ducks and roosters. It lived in Europe about 66.7 million years ago, about the time when dinosaurs existed. It is believed that he could fly and his habitat was coastal areas. His contribution to science was very valuable because he provides information about the first modern birds that lived at that time.

On Madagascar there was a group of birds that appeared about 85 million years ago and became extinct due to human pressure around the 18th century. Their name refers to their main characteristic, the enormous size they could reach, up to 3 meters high and about 650 kg.

There was a group of atypical birds that included a variety of species that differed in size but had one common feature in their evolutionary process: the absence of wings. They lived in New Zealand and, depending on the species, they could be the size of a modern chicken or grow 3 meters tall. They appeared about 90 million years ago and became extinct around 1400 due to human activities. Among their living relatives we find the kiwis.

If you want to learn more about birds that have become extinct, do not miss this article about the dodo and the reasons for its extinction.

In some cases, extinct birds are closely related to species living today. Let us know some examples of living prehistoric birds:

This is a family of flightless birds that emerged in the Eocene, a period that lasted roughly between 56 and 34 million years ago. Currently, the only living genus is Struthio, which includes the peculiar ostriches.

This family belongs to the group of ratites, which are flightless birds and have a long evolutionary history. There are several already extinct species in this family. Currently, only three species commonly known as Rheas are still alive.

This group, traditionally called, contains two subgroups within which there are numerous species with a long history of domestication by humans, namely:

The ancestors of this group lived with the dinosaurs, but they became extinct. However, the Galloanserae were able to continue their evolutionary path and today have representatives such as chickens and ducks.

If you want to read similar articles to Living and Extinct Prehistoric Birds - Evolution of Birds, we recommend you visit our Facts about the animal kingdom category.

References
Bibliography
Birds That Do Not Fly - Flightless Birds
Carnivorous Birds List - Examples of Birds of Prey
Herbivorous Birds - List of Herbivore Birds
Types of Bird Feet
Related categories
Endangered animals
Most read
1.
What Animal am I According to my Zodiac Sign?
2.
What Does It Mean When a Cat Shows Up at My Door
3.
10 Most Beautiful Animals in the World
4.
The 10 Most Solitary Animals in the World
5.
How Many Types of Lions Are There?
6.
Why do Dogs Get Stuck when Mating?
7.
10 Smells that Attract Cats
8.
Animals With Scales - Full List
Types of Water Birds
What Is A Rhea Bird?
How to Keep Birds Away - Humane Methods of Bird Repellent
Bird Sayings and Phrases
Different Types of Pet Birds
Marine Prehistoric Animals
Cat History and Evolution
Types of Birds With Long Beaks 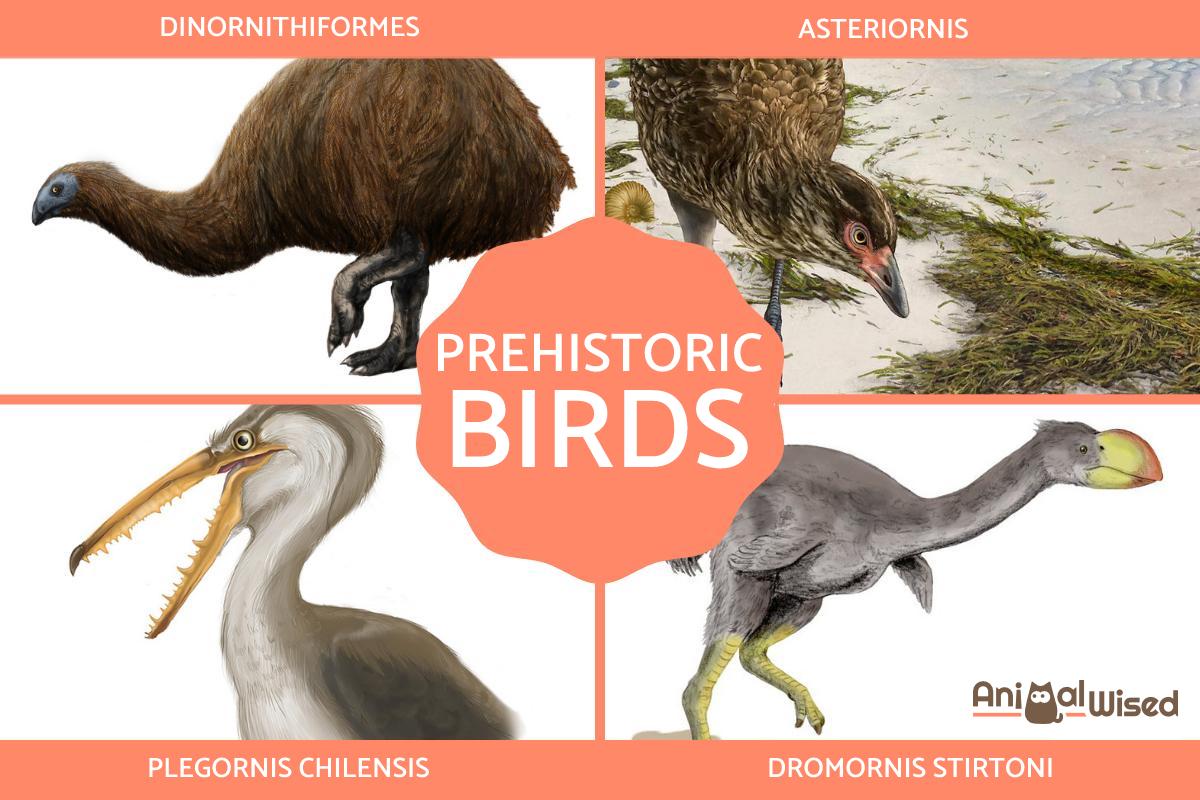 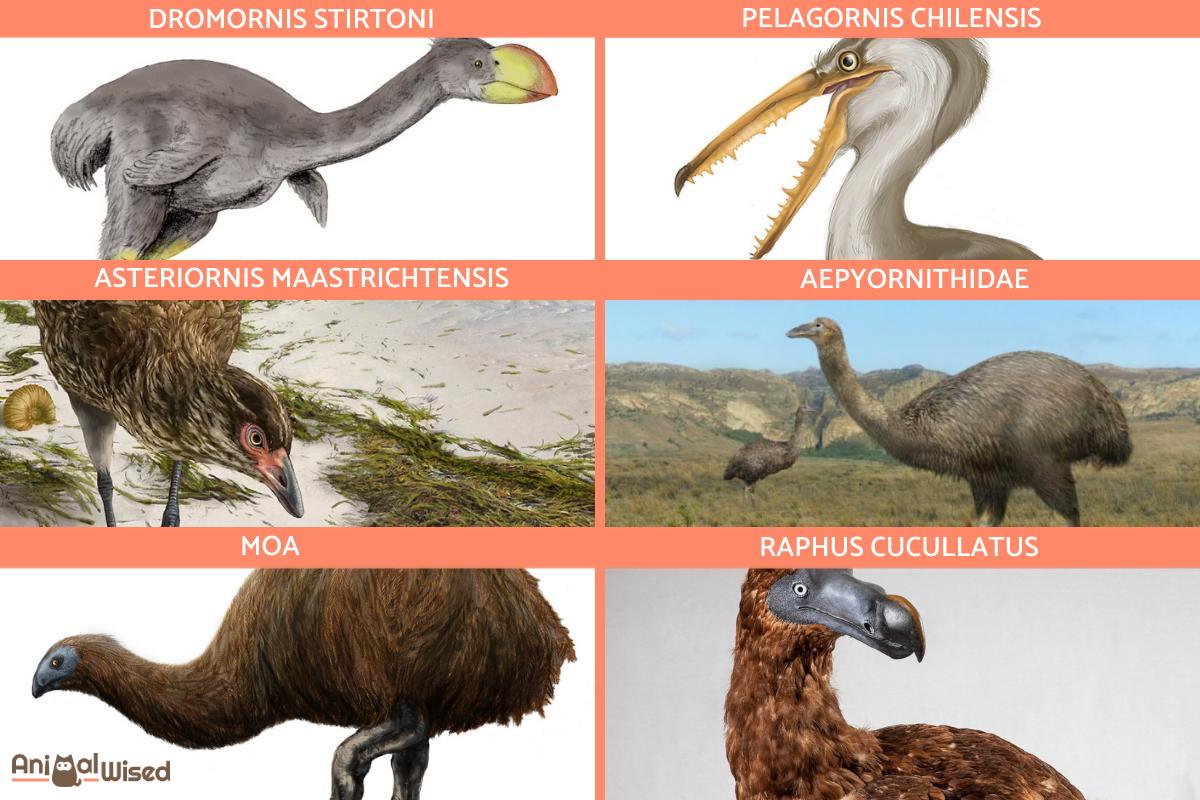 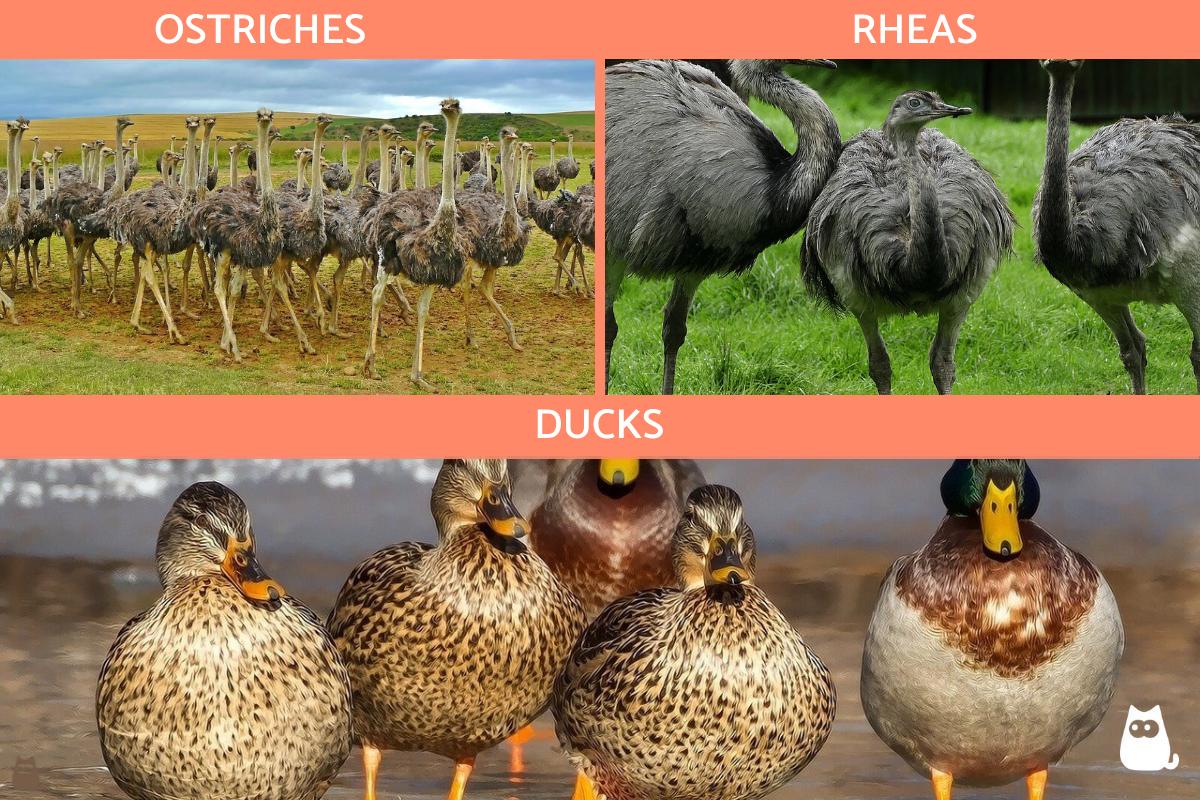