My Cat Is Coughing and Gagging 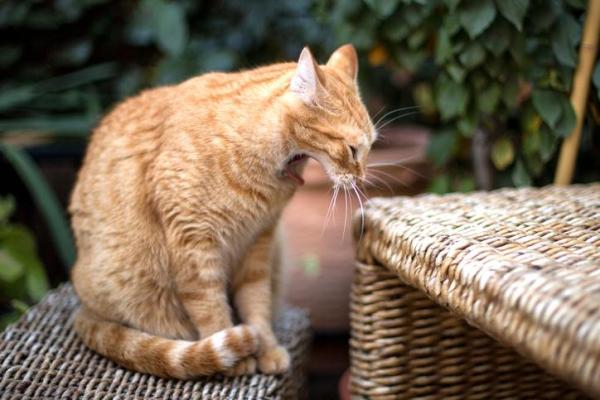 Although they present as similar symptoms, coughing and gagging in cats are not the same. Coughing is a sharp sudden expulsion of air form the lungs, whereas gagging is more of a choking sound. However, when the two present at the same time, it can help us to better determine the underlying cause. Some of these are short acute problems which will pass promptly. Others are symptoms of a pathology which may require a prolonged treatment.

At AnimalWised, we look at the possible reasons why my cat is coughing and gagging. We discover the most common causes and see what treatment options are available. Since some of these causes can be severe, we must stress the importance of going to a veterinarian for diagnosis.

You may also be interested in: My Dog Has a Dry Cough and Gags
Contents

Difference between coughing and gagging in cats

It is important we know whether a cat is coughing or gagging as one is more serious than the other. When a cat is coughing, it will be a symptom of a disease or medical problem. It might be a serious problem which requires immediate treatment or may be a minor acute issue which requires management of symptoms. Coughing is used to try to remove fluids, foreign objects or even minute particles from the airways. The cough itself is a forced projection of air which helps dislodge these substances.

Gagging in cats is a noise which is characteristic of choking or retching. While it too is a symptom of another problem, it is often something much more immediate. Retching can be part of the gag reflex because something is touching the back of the cat's throat. However, it usually means that something is obstructing the airway rather than just agitating it. If an airway is obstructed, the cat can asphyxiate and die in a relatively short period of time.

Since they are related, there are some reasons why a cat will be coughing and gagging at the same time. We look at these causes in more detail below:

Upper respiratory tract infections (URIs) in cats are relatively common. The term refers to a group of infections which can affect the upper respiratory system, either completely or in part. Thanks to the development and utilization of vaccination programs, their incidence is decreasing. The causative agents of these infections are usually viral, bacterial or fungal. They cause various symptoms, but coughing and gagging are common.

Some of the most common causes of coughing and gagging cats are due to feline rhinotracheitis virus, feline calicivirus and Chlamydia infections. URIs in cats are commonly highly contagious and are transmitted between cats via secretions. Often this is in the form of mucus or purulent discharge. When such secretions are expelled they can cause gagging or agitation leading to coughing. Since cats groom each other, bacteria and viruses can spread easily.

Young kittens are more likely to develop a URI, as are those with feline leukemia virus or any reason for immunodeficiency. Cats going through stressful situations can have lower defences against infections and upper respiratory tract infections can spread easily through animal shelters or places where cats live in large groups. Infections from various causative agents can affect a cat at the same time, such as when a viral infection leads to a secondary bacterial infection.

Along with coughing and gaging, upper respiratory tract infections in cats can lead to the following symptoms:

When cats have a URI and start coughing and gagging, they will often stick their tongue out as they retch. This is because the cat is trying to improve their breathing. By stretching out their neck, they can open up their airways and are better able to expel discharge. This characteristic actions changes the posture of their whole body and can look dramatic.

The symptomatology of these problems is usually clear enough for the veterinarian to diagnose a URI. They will likely test for immunodeficiency problems such as leukemia virus. With viral infections, there is no direct treatment. Treatment will involve symptom management and support the animal as their body fights the infection.

When the problem is bacterial, as either a primary or secondary infection, antibiotics may be administered to kill the bacteria. Samples may need to be taken to confirm the type of bacterium present. If the URI has progressed, the cat may need restorative treatments such as fluid therapy and their hygiene may need to be maintained by their guardians. Early detection and intervention is important for a good prognosis. Even when the cat recovers, viruses can remain dormant and induce symptoms when their immune system is again compromised.

For related problems, take a look at our article on why your cat has a runny nose and is sneezing.

Feline asthmatic syndrome, commonly known as asthma in cats, often causes the cat to apear to cough and gag at the same time. When cats with asthma make the choking noises, it is due to bronchoconstriction which restricts their breathing. It is one type of severe respiratory problems which affect around 1% of the total domestic cat population. Symptoms of asthmatic syndrome include:

When we see weight loss or fever, it is usually to a secondary bacterial infection or because the coughing makes it difficult to ingest food. Diagnosis of asthma in cats can be made by a veterinarian. Observing symptoms may be sufficient as there are not many diseases which cause dyspnea and coughing in cats at the same time. Treatment will depend on the severity and frequency of the symptoms and, as always, should be prescribed by the veterinarian.

Sometimes intense coughing spells can be due to problems related to their gastrointestinal system. This is especially the case when it is succeeded by vomiting. Digestive problems which can lead to coughing and gagging include:

Regardless of the reason why your cat is coughing and gagging, it is important you take them to a veterinarian. As you can see, the causes are varied and correct diagnosis is essential to ensure their well-being.

If you want to read similar articles to My Cat Is Coughing and Gagging, we recommend you visit our Breathing diseases category.

Bronchitis in cats - Symptoms and Treatment
Reverse Sneezing in Dogs - Causes, Treatment And Care
Why does my Cat Cough so much?
My Cat is Wheezing When Breathing - Causes and Treatment
Related categories
Reproductive system diseases Eye problemsPreventionMedicineBacterial diseasesHome Remedies
Most read
1.
Can I Bathe My Dog After Vaccination?
2.
My Dog Is Bleeding from His Penis
3.
My Dog's Poop Starts Solid Then Goes Soft
4.
My Cat Has Liquid Coming From Their Anus
5.
What to Do if My Dog has Something Stuck in his Throat?
6.
My Dog Has Pus Coming From His Penis
7.
Myiasis In Dogs - Symptoms, Removal And Treatment
8.
Why Does my Dog Have Swollen Breasts?
My Rabbit is Sneezing - Causes and Treatment
Bronchitis in Dogs - Symptoms and Treatment
My Cat Is Reverse Sneezing
My Cat Has a Runny Nose and is Sneezing
How to Treat Kennel Cough in Dogs
Why Does My Cat Sneeze?
Collapsed Trachea in Dogs
Respiratory Infections in Dogs - Upper & Lower Respiratory Disease

My Cat Is Coughing and Gagging 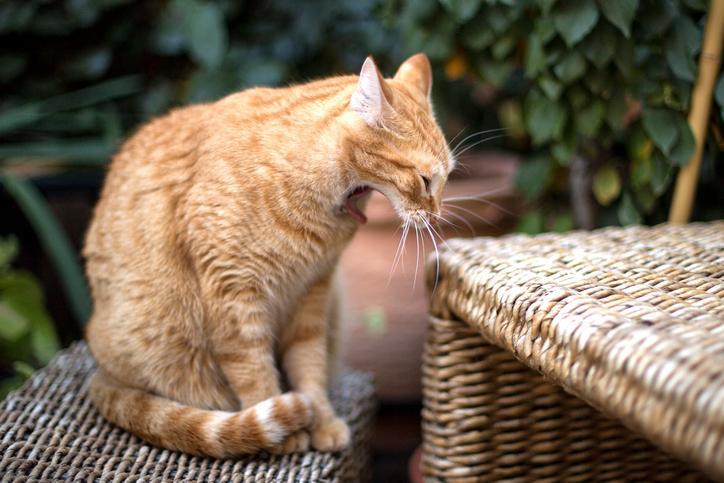 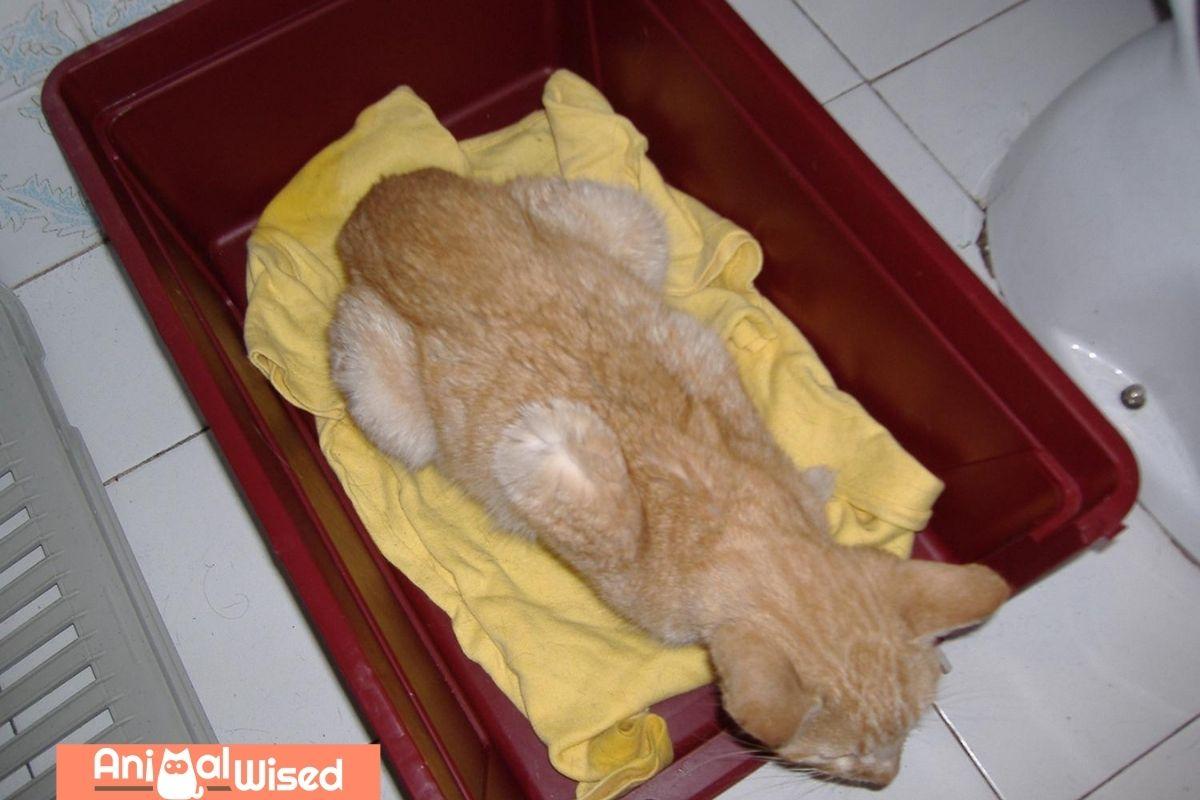