When a dog moves their mouth as if they were chewing, grinding their teeth or chattering, one possible cause is bruxism. Also known as teeth grinding, bruxism is a clinical sign which arises from various causes. The result is often your dog making weird movements with their mouth. This can be very disconcerting, especially since it looks like the dog is very anxious. Bruxism in dogs is usually accompanied by other clinical symptoms, depending on their origin. Chattering and grinding can result in decay of the teeth, something which can incur various secondary problems.

At AnimalWised, we investigate why my dog is making weird mouth movements. We find out what are the causes of bruxism, what treatment options are available and whether there might be some other issues at play.

You may also be interested in: My Dog's Mouth is Dry
Contents

As we have explained in the introduction, bruxism is not a disease. Rather, it is a symptom of various diseases. For this reason, understanding why our dog makes weird mouth movements can be difficult. One of the first, and most serious, reasons for dogs chattering is epilepsy.

Epilepsy on dogs consists of an abnormal electrical activity in the brain due to the spontaneous depolarization of nerve cells. The result is not only strange mouth movements, but it can cause seizures which cause short-term alterations in the dog's behavior. It is the most common neurological disorder in canines. As a consequence of epilepsy, a dog may move their mouth, grinding their teeth and moving their jaw in weird ways.

It is possible for the dog to have minor epileptic episodes without us even noticing. It may occur on such a small levels that the symptoms the dog might feel are reduced to feeling a little odd. This is something which can be difficult for us to detect, so the dog may have epilepsy for some time before it is diagnosed.

Periodontal disease occurs after the formation of bacterial plaque on the teeth of dogs. Accumulated food remains food serve as a substrate for the oral bacteria of dogs, which begin to multiply rapidly and form plaque. This plaque comes into contact with canine saliva and yellowish tartar forms that adheres to the teeth. Also, the bacteria continue to multiply and feed, spreading towards the gums, causing them to inflame and potentially bleed (gingivitis).

Dogs with periodontitis will likely develop mouth pain caused by bruxism. The weird mouth movements movements can wear down the teeth, exacerbated by gingivitis. It will also likely result in halitosis (bad breath). In addition, as the disease progresses, tooth decay and bacteria enter the blood system via the blood vessels. This can cause septicemia, affecting internal organs leading to symptoms of digestive, respiratory and cardiac disease.

Malocclusion is the misalignment or improper growth of a tooth. It often results in the teeth not meeting correctly when the mouth is closed. Prognathism is a related condition whereby either the upper or lower jaw sticks out. It results in an imperfect bite which has various effects, including the dog making weird mouth movements.

Malocclusion in dogs can be of three types:

Associated clinical signs are teeth grinding when performing normal mouth movements, food coming out of the mouth when chewing and a predisposition to infection or injury when chewing. Brachycephalic dog breeds are often affected, a situation which is exacerbated by continued breeding of individuals from a smaller genetic pool.

Like people, dogs with toothache also chatter their teeth to manage the pain. This is usually a reflex movement, but it can also cause more pain.

Unlike people, dogs cannot communicate with us and bruxism is sometimes the only clinical sign that indicates a painful dental process. These could be it inflammatory disease, neoplastic problems, an infection or a dental fracture. When puppies start to lose their baby teeth and their permanent teeth grow through, you may see them grinding their teeth or making weird movements.

Stressful situations and anxiety problems in dogs can cause them to manifest strange mouth movements, one of many possible signs of stress. Grinding teeth often incurs in stressed or anxious dogs while they sleep. It is possible to observe that the dog seems to be chewing, constantly sticking out and sticking their tongue or moving their mouth rapidly as a consequence of this stress or anxiety.

Although dogs are less sensitive to stress than cats, they can also suffer stress from similar situations. These can include moving, introducing new animals, new family members, frequent noises, illness, anger or discomfort of the caregiver or changes in routine. However, this reaction in dogs is much less common than in people.

Similar to what happens with tooth or gum pain, when a dog has pain due to a disease along the digestive tract, it can manifest it with bruxism.

Esophageal disorders such as esophagitis, gastritis, gastric or intestinal ulcers and other diseases of the esophagus, stomach and intestine can cause a dog to do strange things with the mouth. This is usually due to the pain and discomfort emanating from further down in their digestive tract, where there are other symptoms we may not be able to see.

The cold can greatly affect our dogs, causing hypothermia and thus endangering their health. One of the first symptoms of hypothermia in dogs is tremors. These can happen all over the body, but teeth chattering is often one of the initial symptoms.

Subsequently, the respiratory rate is reduced, clumsiness, drowsiness, dry skin, lethargy, low blood pressure, reduced heart rate, hypoglycemia, depression, pupillary dilation, staring, depression and collapse may occur. This depends on how far the condition progresses before treatment is administered. If the dog's temperature lowers sufficiently, it will be fatal.

Making weird mouth movements is only one of the many strange things dogs may do. It doesn't mean they are all signifiers of a health problem, something we explain further in our video below: 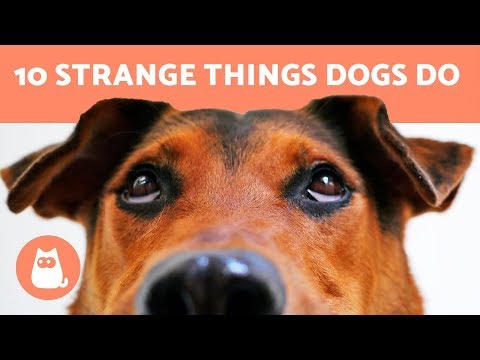 Detecting the underlying cause is the first step in treating a dog's teeth grinding or chattering. For example, if they have hypothermia, their body temperature will need to be raised back to normal. If they have an infection, dental disease or any other issue which requires treatment, we will need to see a veterinarian.

However, some dogs have conditions which cannot be treated easily. For example, dogs with pragnathism often never have their misaligned jaw corrected. Instead, management of their symptoms is required. This means they may need to eat a soft food diet and we need to be very careful of any possible dental issues.

Prevention of this problem involves maintaining their overall health. In particular, we will need to check their dentition regularly and maintain oral hygiene (e.g. brushing the dog's teeth regularly).

If you want to read similar articles to My Dog Is Making Weird Mouth Movements, we recommend you visit our Other health problems category.

My Dog Is Bleeding From Their Mouth
Why is My Cat Acting So Weird?
My Dog Is Acting Weird After Flea Medicine
My Dog Keeps Making a Gulping Sound
Related categories
Cardiovascular diseasesDe-wormingHereditary diseasesIntestinal problemsEye problemsSkin problems
Most read
1.
My Dog Is Bleeding from His Penis
2.
What to Do if My Dog has Something Stuck in his Throat?
3.
My Dog Keeps Licking Her Private Area - All Possible Reasons
4.
My Dog Has Pus Coming From His Penis
5.
Why Does My Cat Push Out His Penis and Lick It?
6.
My Dog's Poop Starts Solid Then Goes Soft
7.
My Cat Has Liquid Coming From Their Anus
8.
Why Is My Cat Vomiting White Foam?
My Rabbit's Stomach is Making Gurgling Sounds
My Dog Has a Cut in Their Mouth
My Dog is Hiding and Acting Strange
Mouth Ulcers in Cats
Is My Guinea Pig Sick?
My Cat Keeps Making Choking Noises
My Cat Keeps Gagging - Causes & Treatment
Why is My Dog Gagging All the Time? 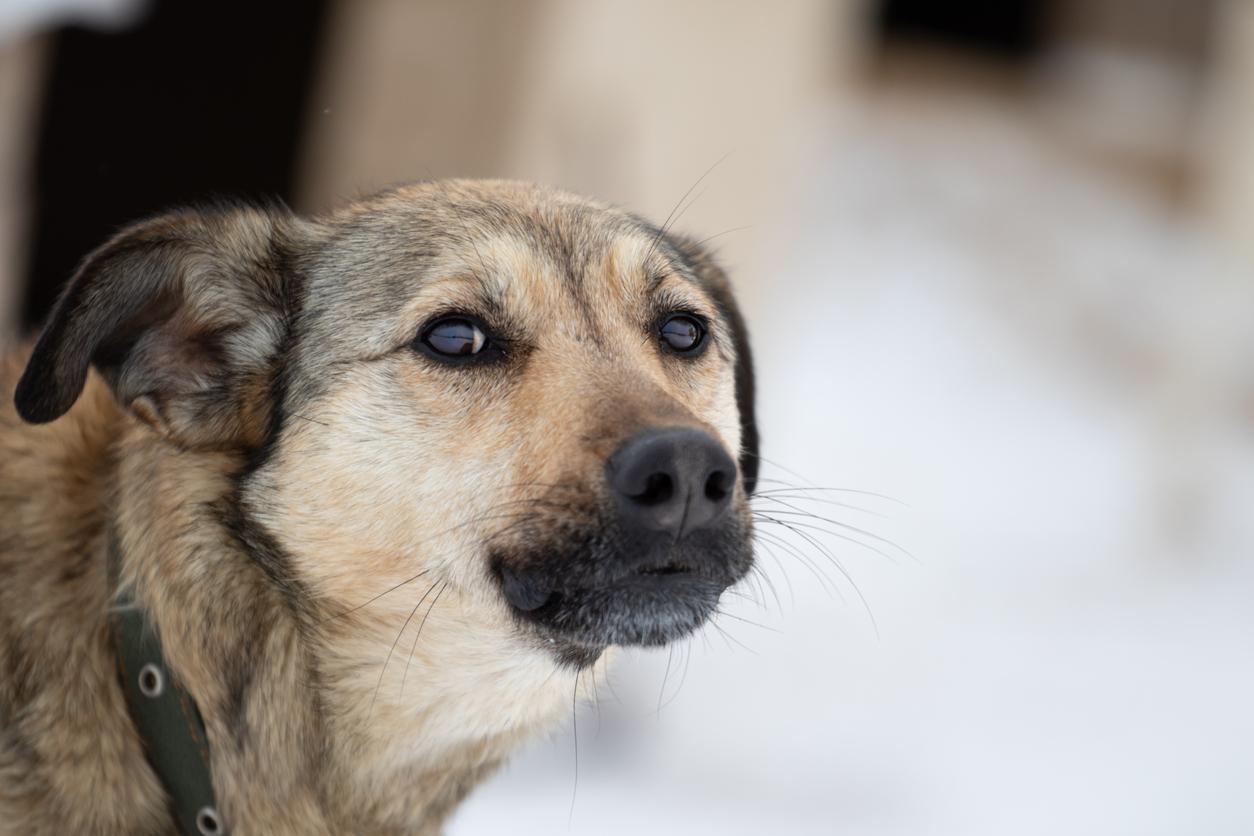 My Dog Is Making Weird Mouth Movements
Back to top