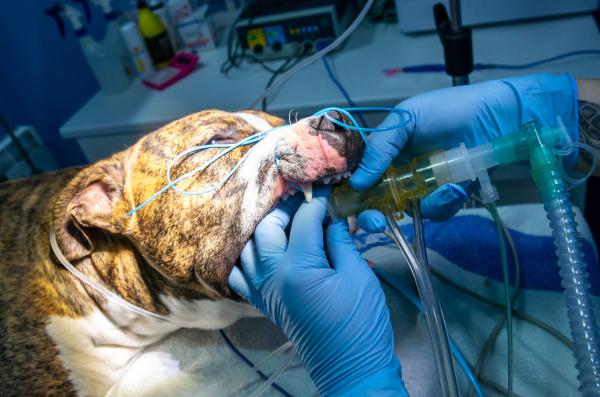 At AnimalWised, we look at the causes, symptoms and treatment of various respiratory infections in dogs. We do so by making the distinction between upper and lower canine respiratory diseases.

You may also be interested in: Rhinitis in Dogs: Types, Symptoms and Treatment
Contents

There is a significant problem in differentiating between different types of respiratory infections in dogs. Infections from different viruses and bacteria can have the same symptomology. Similarly, genetically inherited disorders, physical trauma and other respiratory health problems can have similar symptoms. For this reason, a proper diagnosis by a qualified veterinarian is required.

In most cases, the symptoms will take the animal by surprise. This can have an effect on both their physical and emotional well-being, especially if they have little understanding of what is happening to them. If your dog has acquired a relatively common respiratory disease such as the cold, they may experience:Sneezing

If the dog has a more complex disease or comprehensive respiratory disease, they may experience a combination of the following:

Whatever the symptoms, you will need to be observant of any changes from the beginning. There are various factors which increase the likelihood of getting a respiratory infection. For example, a drop in temperature can lower their immune defenses, especially if the dog is left outside. Increased humidity can also encourage bacterial transmission. Dogs which live in confined spaces can also pass it on to each other, especially if there is poor hygiene.

Respiratory infections in dogs are generally grouped into two main groups; upper and lower respiratory tract infections. They include:

While these often affect one or other, there are some infections which can spread to both upper and lower parts of the respiratory tract. To understand more, we look at each of these canine respiratory infections in greater detail in the sections below.

Cold and flu in dogs

The common cold and influenza in dogs are respiratory infections caused by a wide range of viruses. Although they have the same names as those which affect humans, these viruses are not zoonotic. This means they cannot be transferred from the dog to humans. One of the most common behavioral signs of the cold or flu in dogs is rubbing their nose on almost anything. This is due to the agitation it caused to the nasal mucosa.

To help alleviate the symptoms of the common cold in dogs, we can gently wash the dog's snout with a towel dampened with warm water. Influenza in dogs usually affects the upper respiratory tract, but can affect the abdominal bronchopulmonary area.

There is no specific treatment for the cold or flu in dogs. Symptom management is the most important form of treatment, especially as it will help prevent the problems progressing into pneumonia. Proper hydration is important and they will usually only be able to eat a reduced diet. Keep them in a warm and dry place free from drafts.

Although sneezing in humans is relatively common, it is not a common symptom for dogs. For this reason, we need to be careful if we observe this symptom. If the sneezing persists or does not start to decrease after 24 - 48 hours, it is advisable to take them to a veterinarian.

Although the symptoms of canine distemper can be varied, it is possible it will affect the respiratory tract. It also tends to affect the gastrointestinal system and, in more severe cases, the central nervous system. It is a viral infection which most commonly affects puppies and senior dogs.

Unfortunately, canine distemper is a serious disease which can be fatal. For this reason, a vaccination has been developed which is effective in contracting the infection. This is one of the reasons it is vital we keep our dog's vaccination schedule up to date.

Another viral infection which can affect a dog's respiratory health is canine infectious tracheobronchitis, also known as canine infectious respiratory disease or ‘kennel cough’. This is caused by the different viral strains, such as, parainfluenza virus (PIC) or the canine adenovirus type 2, and bacterial infections, including Bordetella bacteria. The name of this infectious canine disease comes from its symptoms and how it is spread.

The symptoms of kennel cough include a sore throat and a hacking dry cough which persists. Although the cough is dry, the dog may also gag and cough up some mucus from the upper respiratory tract. This is sometimes confused with vomiting in dogs. It is referred to as kennel cough due to the fact it is often spread in animal shelters and kennels due to the dogs living in such close proximity.

Treatment of kennel cough in dogs is dependent on the cause. For bacterial infections, antibiotics will likely be prescribed. For viral infections, it will rely on symptom management, especially with the use of cough suppressants and anti-imflammatories.

Bronchitis is the term for a condition where the bronchi in a dog's lungs become inflamed, but the causes are varied. This disease is often coupled with other respiratory infections in dogs like the cold and flu. In its initial stages, canine bronchitis can appear to be a slight dry cough or sore throat which doesn't cause much damage.

However, if initial minor respiratory infections in dogs are poorly managed or the dog has other related health problems, it can progress to canine bronchitis. This can be acute bronchitis (lasting a maximum of 2 months) or chronic bronchitis (more than two months due to lesions created in the airways).

Bronchitis in dogs can be cause by both viral or bacterial infections, but is also related to allergies, fungal infections and foreign bodies. In acute cases of bacterial bronchitis, antibiotic treatment will be prescribed. Removing foreign bodies can be more complicated. In the case of chronic bronchitis, treatments will usually be combined with brocondylators and, sometimes, cough suppressants. Nebulizers may be applied to keep the airways hydrated.

Pneumonia in dogs is a serious disease that attacks the lungs and lower respiratory tract. It cause inflammation and can serious affect their breathing. This disease usually attacks older dogs, very young dogs or canines with a compromised immune system. It is rare fr a healthy adult dog to catch pneumonia, although it can be a result of a progression from other diseases such as bronchitis.

Although often a viral infection, canine pneumonia can be a result of various other pathogens including bacteria, fungi and internal parasites. It is diagnosed with a blood test for dogs and chest x-rays to see the extent of the inflammation. Treatment will depend on the underlying cause and type of pneumonia, of which the latter can be categorized as:

Lungworm is a disease caused by internal dog parasites known as nematodes. These are parasitic worms in the order Strongylida. While they can infect the lungs, the lungworm nematodes will also infect other areas of the respiratory tract. Since the worms burrow into this tissue, the damage they cause is very serious. Nematodes usually enter the body through eating infested food, breaking through the gastrointestinal tract and traveling to the lungs.

Treatment of lungworm in dogs will depend on the type of nematode which causes the infestation. Diagnosis is based on various tests including chest x-ray and fecal inspection. Although the problem can be very serious, lungworm in dogs is treatable. Prednisone for dogs is often given to reduce inflammation.

Other respiratory problems in dogs

As we have stated in earlier sections of this article, respiratory infections are only one type of respiratory disease in dogs. Others include:

Regardless of the cause of the respiratory disease, we need to take our dog to the veterinarian if we observe any breathing problems in dogs. Some of these infections can be deadly if left untreated.

If you want to read similar articles to Respiratory Infections in Dogs - Upper & Lower Respiratory Disease, we recommend you visit our Breathing diseases category.

Laryngeal Paralysis in Dogs - Causes & Treatment
My Cat Has a Gurgling Sound in Their Throat
What is Pulmonary Fibrosis in Dogs?
Snuffles (Pasteurellosis) in Rabbits - Causes, Symptoms And Treatment
Related categories
Eye problemsOther health problemsParasitic diseasesPreventionPregnancy problemsBacterial diseases
Most read
1.
Can I Bathe My Dog After Vaccination?
2.
My Dog Is Bleeding from His Penis
3.
My Dog's Poop Starts Solid Then Goes Soft
4.
My Cat Has Liquid Coming From Their Anus
5.
What to Do if My Dog has Something Stuck in his Throat?
6.
My Dog Has Pus Coming From His Penis
7.
Myiasis In Dogs - Symptoms, Removal And Treatment
8.
Why Does my Dog Have Swollen Breasts?
My Cat Keeps Sneezing But Seems Fine - Common Cold in Cats
Colds in Dogs
Cat Sinus Infection: Home Remedies
Pneumonia in Dogs - Symptoms, Causes and Treatment
My Dog Is Breathing Heavily Through the Nose
Collapsed Trachea in Dogs
Asthma in Dogs- Causes, Symptoms, Treatment and Home Remedies
My Dog Has a Dry Cough and Gags 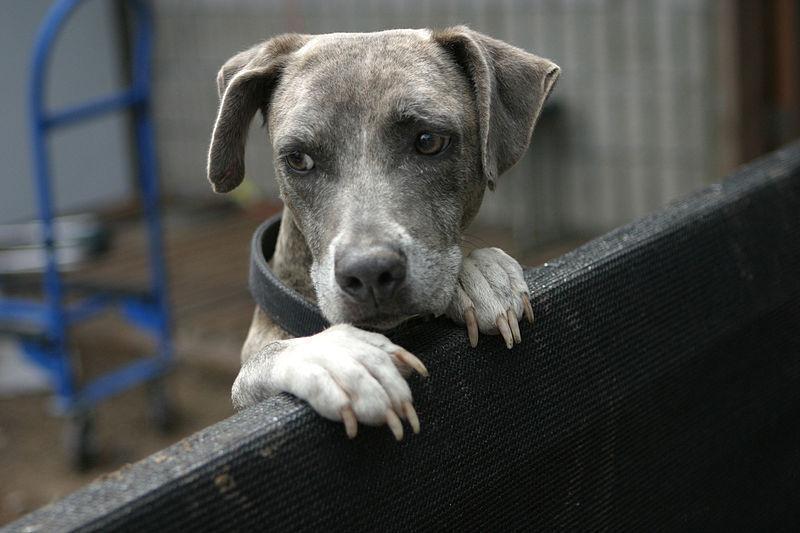 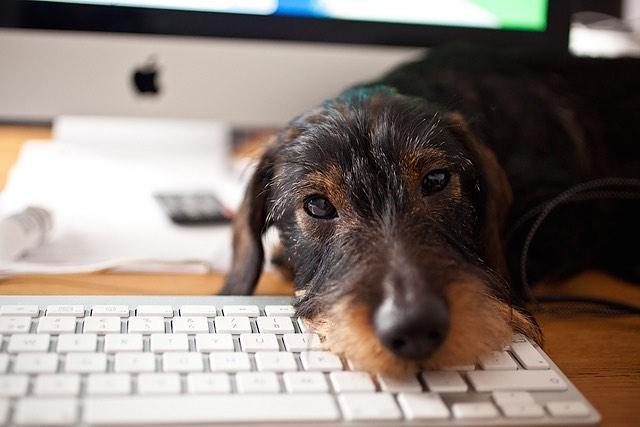