Signs of Heat Period in Rabbits

Knowing the period of heat in rabbits, whether female or male, is important. This is because being in heat can determine their behavior as well as how you need to care for them. It can also make this care more difficult than usual. We also may misconstrue their behavior as something else or think that they are distressed in some way (not that being in heat can't be distressing). This is why AnimalWised looks into the signs of heat period in rabbits for both males and females. This way we can determine why they are behaving in such a way, how long the behavior will last and what to do to make sure the rabbit is in as little distress as possible.

You may also be interested in: My Spayed Cat Is in Heat
Contents

What is being in heat

The heat period for a rabbit is the time when it is at its most fertile. This means that females will be in the most likely state to become pregnant and males will be the most readily able to inseminate them. This heat period will differ according to species. For example, female dogs will only be fertile for a few days a couple of times a year. They will lead up to this time with a period of bleeding which can last up to three weeks. On the other hand, animals like cats and rabbits have an induced ovulation which can, essentially, be maintained throughout the year. It is not associated with any bleeding. This period of heat is known as the estrous cycle and is different to the menstrual cycle which is common in some mammals (like humans). One difference between these two states is that mammals with an estrous cycle reabsorb the endometrium which is shed in those with menstrual cycles.

Some may not even be aware that male rabbits get in heat, but they do. It is not the same physiological function as in female rabbits since they have different genitalia, but they do share certain characteristics. Rabbits are known for their precocity and speed with which they mate. This is one of the reasons people may use the phrase ‘breed like rabbits’ as well as their symbolism of fertility in many different cultures.

With some variation, male rabbits can be sexually mature at the relatively young age of 4 - 6 months. This may depend on their size, with larger rabbits usually taking longer to mature. With a life expectancy of somewhere around 8 - 10 years, this can mean a lot of procreation. They don't have periods of heat as in period of ovulation. Instead, their heat is a pretty constant determination to copulate with peaks and troughs of activity. This translates to different changes in behavior which include:

All of these manifestations of a rabbit in heat can, understandably, lead to distress. It is for this reason it is generally agreed that castration is the kindest course of action for a domesticated rabbit. It not only improves their quality of life, but it makes interaction with them bearable. If you have a male rabbit in constant heat, they will not be an easy pet to live with.

As with male rabbits, female rabbits will reach sexual maturity very soon. There are variations in a female rabbits first heat period, but it can start between 4 - 6 months of age. It also is maintained throughout their life cycle, also with periods of heightened or lessened sexual activity. Rabbits should not present any blood during the estrous cycle. If they do, it is likely a sign something is wrong and may need to be taken to the veterinarian.

The symptoms of a female rabbit in heat are similar to those of a male rabbit. We find they will mark territory with urine, have periods of both restlessness and aggression as well as riding objects for sexual stimulation. However, additionally, we can also see their vulva appears more visible and may turn a reddish-brown color. If pregnancy occurs, it will last about 30 days at the end of which they will give birth to somewhere between 1 and 5 kits (baby rabbits).

After the birth, the rabbit will lactate to feed their young. However, unlike other animals, during this period, they are able to become pregnant again. This is one of the reasons rabbits are considered pests in some areas. Their efficient and rapid ability to procreate can lead to large populations in just a relatively short time. This is another reason it is important to be careful with unsterilized male and female rabbits. If you keep them together, they will likely breed quickly.

In addition to the behavioral changes occurring during the estrous cycle, rabbits are more prone to developing uterine tumours such as adenocarcinoma which are potentially life threatening. This is another reason why early neutering or sterilization is recommended. This is especially so for rabbits which live longer as these life threatening conditions will only increase with age.

As we can see, male and female rabbits in heat can propose a serious problem of coexistence. For in the case of unscrupulous caretakers, this can lead to a pattern of breeding which results i either animal abandonment or cruelty.

How long are rabbits in heat?

The length of time rabbits are in heat is one of the reasons for such proliferation of the animal. There is no specific amount of time for rabbits to be in heat. After they reach sexual maturity, they can be in heat at any time during the year. This is the same for both male and female rabbits. They may undergo some period where their fervency during heat will be greater or lesser. However, when this time will be is almost impossible to predict.

The importance of sterilizing rabbits

As we hope to have been putting across, both male and female rabbits in heat leads to behavioral problems. In the wild, these rabbits are free to mate which reduces the intensity of these problems. In captivity, however, many animals will not be able to mate with the other sex. This results not only in problems for the owners, but a serious issue with stress on the animal and potential serious health problems. Since the estrous cycle in female rabbits is practically permanent, it is advisable to sterilize them. This should be done towards the end of their first 6 months of life in females. In males, it should happen as soon as their testicles descend. Males and females should be kept separate before sterilization takes place in case they reach sexual maturity before you are able to observe it.

For males, neutering a male rabbit is a relatively simple operation which involces the removal of the testicles. In female rabbits, sterilization is a process known as spaying which is a little more involved. It requires he removal of the internal sexual organs, either the uterus, ovaries or both. Even with this, hospitalization is not required and the rabbits should be able to recover at home. This reduces the stress of being in an unknown place and promotes recovery.

If we decide to sterilize the rabbit, we must also administer antibiotics at home to avoid infections and analgesics to reduce their discomfort. If the rabbits experience too much pain they will stop eating and can die of starvation. We must also keep their hutch and bedding very clean to reduce contamination of the wound which can lead to infection. The behavioral effects on our rabbits will not be immediate. We must have patience as the recovery time can take a few months to return them to calm and affectionate pets. It is also very important this sterilization process is carried out by a professional veterinarian with experience in this area. This is to make the operation as painless as possible as well as being able to treat any complications which may arise.

If you want to read similar articles to Signs of Heat Period in Rabbits, we recommend you visit our Other health problems category.

My Dog In Heat Won’t Stop Crying
5 Signs of Old Age in Cats
Fever in Rabbits - Symptoms, Causes and Treatment
Signs of Allergies in Cats - Does Your Cat Have Allergies?
Related categories
Mental problemsHome RemediesNeurological diseasesBacterial diseasesBreathing diseasesMedicine
Most read
1.
What to Do if My Dog has Something Stuck in his Throat?
2.
My Dog Keeps Licking Her Private Area - All Possible Reasons
3.
My Dog Is Bleeding from His Penis
4.
My Dog Has Pus Coming From His Penis
5.
Why Does My Cat Push Out His Penis and Lick It?
6.
My Dog's Poop Starts Solid Then Goes Soft
7.
My Cat Has Liquid Coming From Their Anus
8.
My Dog Keeps Making a Gulping Sound
My Dog Is Bleeding a Lot During Heat
Most Common Diseases in Rabbits
How do Cats Act When they are in Heat?
Why Is My Rabbit's Urine Red?
Stages of Breast Cancer in Cats - Mammary Tumors in Cats
Symptoms of Cataracts in Cats
Adenocarcinoma in Dogs - Causes, Sign and Treatment
My Rabbit Is Breathing But Not Moving

1 comment
Rating:
Enoch newsong
02/07/2020
I don't think rabbits go into heat because my does always receives my does at every time I breed them
Signs of Heat Period in Rabbits 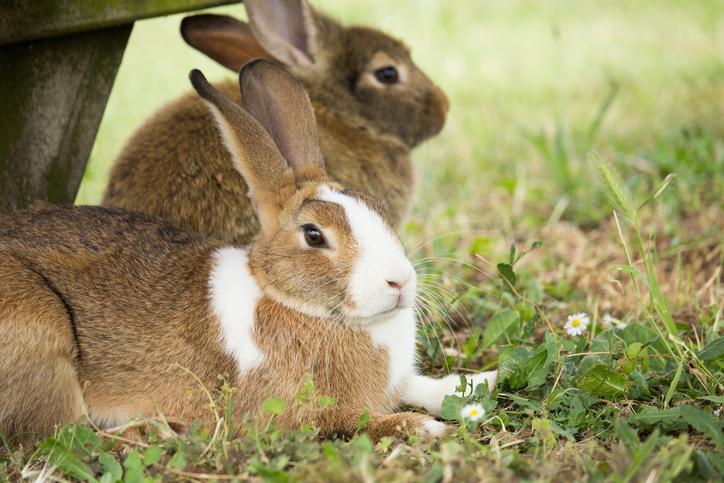 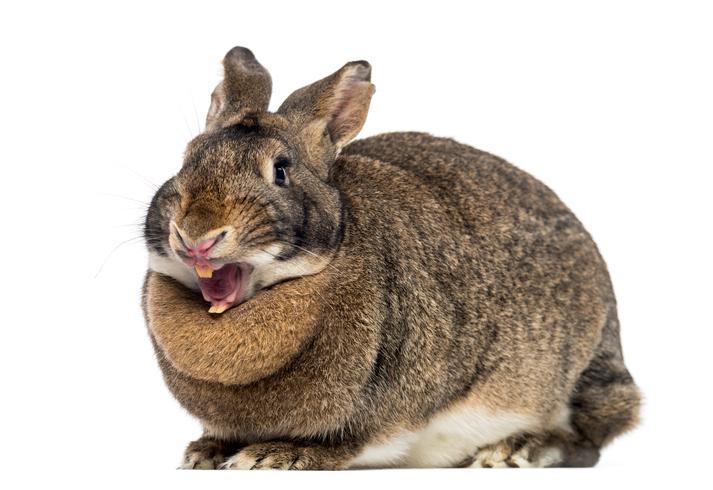 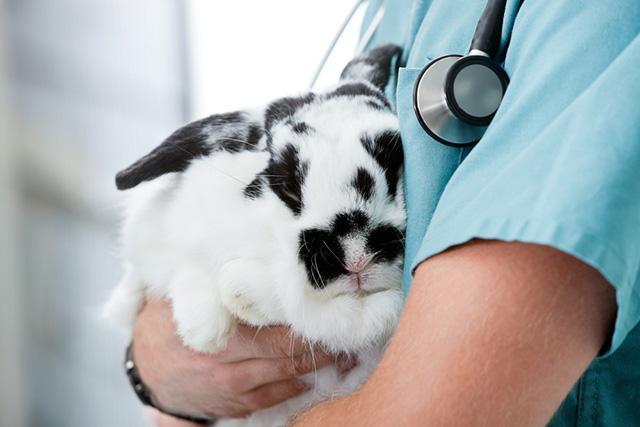