At AnimalWised, we look at the types of Doberman Pinscher and all breed variations we might find. We explain what differences there may be and provide pictures so you can see them for yourself.

You may also be interested in: Types of Chihuahua - All Breed Variations
Contents

General characteristics of the Doberman Pinscher

The Dobermann Pinscher, also known as the Dobermann outside of the US and Canada, is a dog of German origin. Their moniker comes from the surname of their first breeder. Karl Friedrich Louis Dobermann who started to developed the breed in the 19th century. He was looking for a working dog which could offer protection, but also be affectionate. The result was the Doberman Pinscher, a dog with excellent working qualities, but which also became a very popular companion animal.

Medium to large in size, the Doberman has a strong, muscular and elegant form. They are a noble dog suitable for both work and companionship, but need to be trained for their specific role. Although their appearance can be intimidating to some, they are actually a friendly dog which develops very strong bonds with their adopted family.

Unfortunately, the Doberman Pinscher is on lists of potentially dangerous dogs in different countries. This is due to indiscriminate breeding, poor training and even being encouraged to be aggressive. The truth is that any dog can become dangerous if this happens. However, well-socialized, wall-cared for and well-trained dogs will be balanced and avoid behavioral problems. 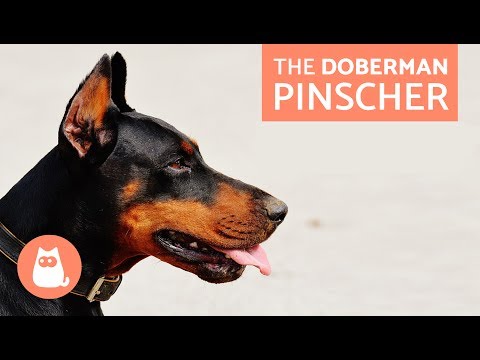 Types of Dobermans according to the World Canine Organization (FCI)

The World Canine Organization (Fédération Cynologique Internationale or FCI in its original French) include the Doberman Pinscher in group 2 - Pinscher and Schnauzer - Molossoid, Swiss Mountain and Cattledogs. The breed standard of a dog is the standard officially accepted by groups like the FCI, something which is commonly used for dog shows and other events.

When we think of Dobermann types, they are grouped by color. The two colors are black and rust red or brown and rust red with clearly defined markings. These rust colored markings are located on their:

White spots and other alterations to coat colors are considered disqualifiers in competitions. However, they can still be beautiful dogs which live a happy and health life.

Types of Dobermans according to the American Kennel Club

We will show the main differences between these two types of Doberman Pinschers in the next section. However, we will start by noting the AKC accepts more colors than the FCI, specifically:

It also allows rust markings on:

Unlike the FCI, the AKC accepts a white spot on the chest, as long as it is small.

Characteristics of the European Doberman Pinscher

First of all, starting with the physical appearance, the European Doberman is considered somewhat less stylized and more rugged than their American counterpart. They are also said to have a greater instinct toward protection and have a stronger temperament.

Although there are some clearly observable physical differences between Doberman Pinscher types, the biggest contrast is in terms of personality. Although they have a strong personality, the European Dobermann is thought to be more balanced. As these differences are not limited to aesthetics alone, it is important we take personality into consideration when choosing which to adopt.

This differentiation may depend on geography. In Europe it is mandatory to carry out a Working Aptitude Evaluation (WAE) test. This is a test which assesses the temperament of the individual dog, used to avoid adopting dogs with an unsuitable temperament for families. The assessment will also test their aptitude for work and social skills with others. This test is not required in the United States where only a simply online registration is required. This makes European Dobermanns better for working dogs.

Finally, due to the different breeding programs, it must be taken into account that the most common genetic diseases may differ. For example, the European Doberman is more prone to eye disorders. On the other hand, von Willebrand disease and hypothyroidism are common in both types of Doberman Pinscher. Our article on the most common diseases in Doberman Pinschers will reveal what else you might expect in terms of health.

Characteristics of the American Doberman Pinscher

The American Doberman Pinscher has been selected with a focus on aesthetics and ease of handling. It is more stylish and does not exactly stand out for a drive towards protection, defense or work. In other words, the qualities of a working dog that have been attributed to the Doberman since its inception in Europe are, so to speak, blurred in the American Dobermann. They are not the most suitable to develop as working or security dogs.

In general, it is common for American Dobermanns to be more shy, even becoming fearful. This can pose a problem in coexistence if the dog always reacts with fear to new situations and elements. The American Doberman can be a very good family dog, especially because they do not require the same amount of education and training which their European counterpart requires.

Regarding health, Wobbler syndrome and skin and coat problems seem to affect American specimens more than European individuals. In the next section we summarize the most important differences between the two types of Dobermans.

Differences between the European Doberman and the American Doberman

These are the key factors used to differentiate between European and American Doberman Pinschers:

Some of the most outstanding characteristics of the European Doberman are:

Among the characteristics of the American Doberman, the following stand out:

If you want to read similar articles to Types of Doberman Pinscher - All Breed Variations, we recommend you visit our Comparisons category.

Bibliography
Types of Pinscher Dogs
Types of German Shepherd - All Breed Variations
Types of Belgian Shepherd Dog - All Breed Variations
Doberman Pinscher vs. Rottweiler
Related categories
What you need to knowThe most...Ideal forThe least...Names
Most read
1.
Best Names for American Bully Dogs
2.
Tamil Names for Dogs - With Meanings
3.
What is the Difference Between a Donkey, a Mule and an Ass?
4.
Stoats as Pets: Guidelines and General Tips
5.
100 Popular Bird Names
6.
Types of German Shepherd - All Breed Variations
7.
How long does a Cat Take to Adjust to a New Home?
8.
The 5 Most Wrinkly Dog Breeds
Types of Siamese Cats
Types of Bichon Dog Breeds
Setter Dog Breed Types
Indian Breeds Of Dog List
Types of Terrier Dogs: Terrier Breeds Around the World
Types of Collie Dog Breeds
Different Types of Boxer Dogs
The Different Types of Labrador Retrievers 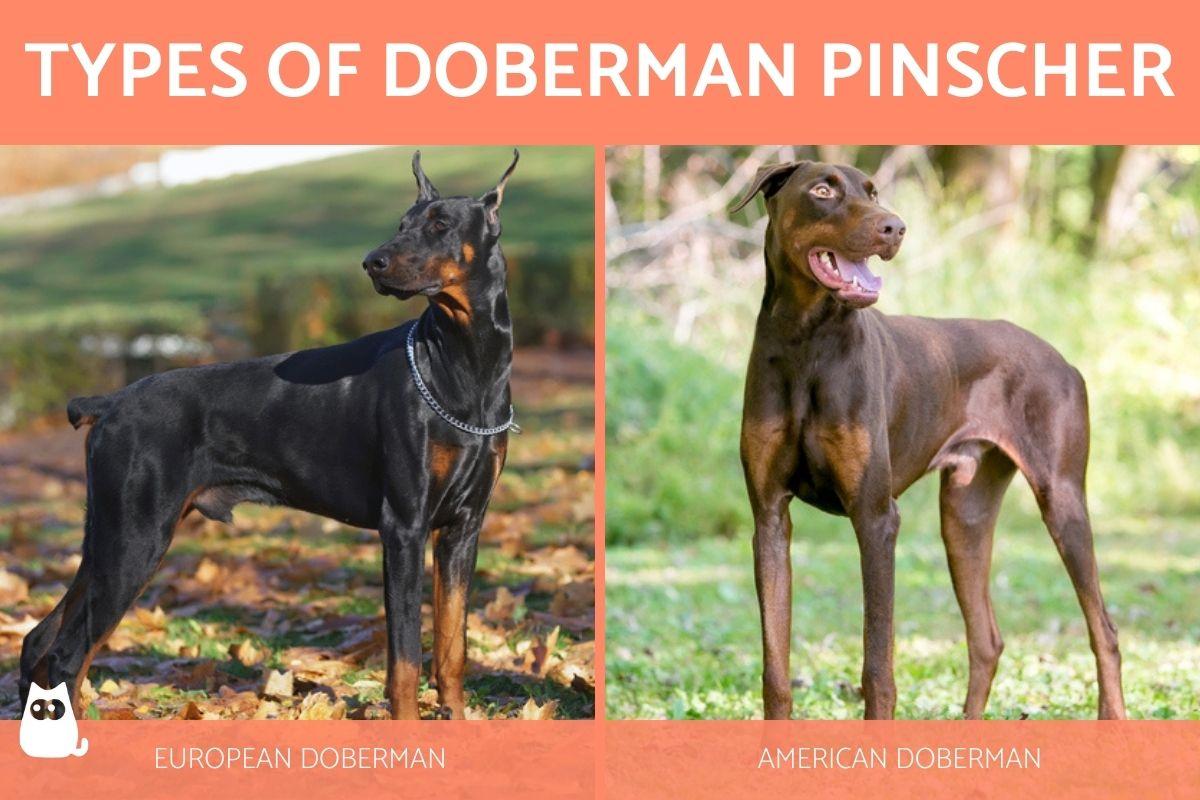 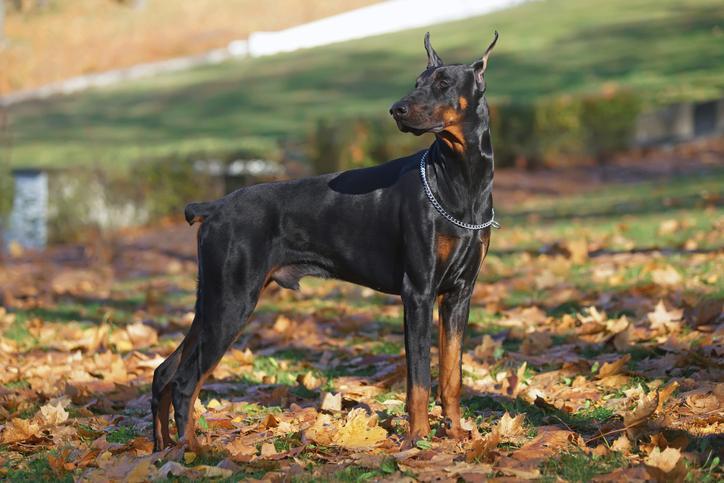 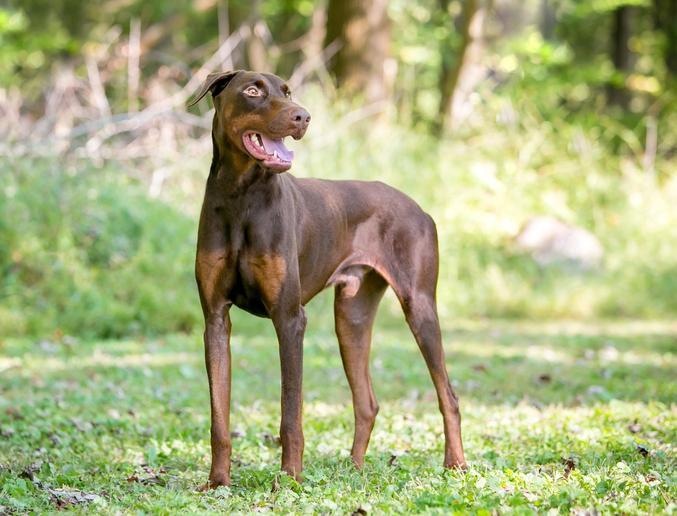 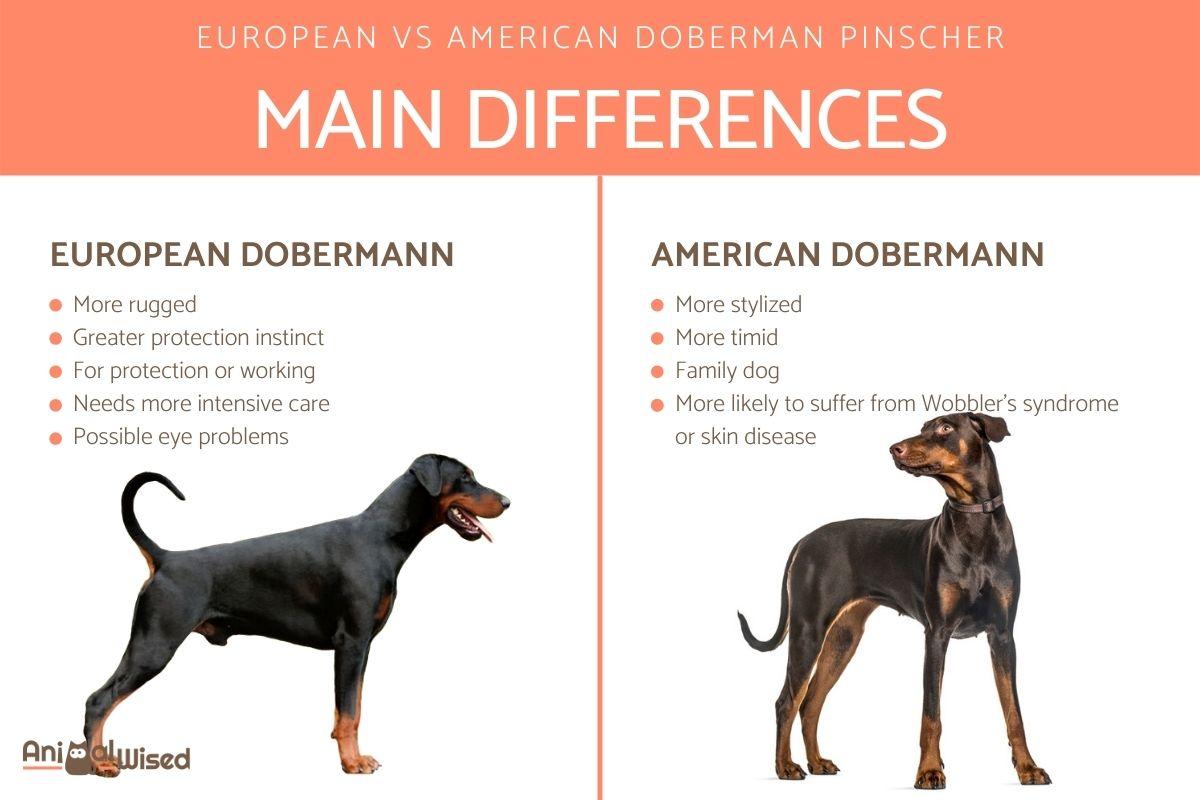