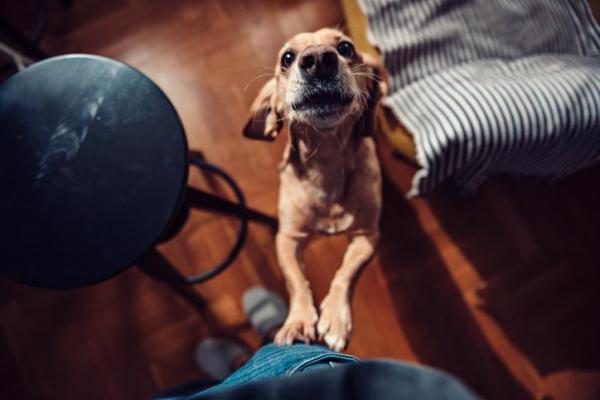 Understanding canine behavior is all about context. A dog will often act differently around their family than they do with a stranger. The same can be said when they greet other dogs or animals of a different species. As a species, the domestic dog is a gregarious animal and very sociable. Greeting is a very important element of social interaction, especially for gregarious animals. It is fundamental for the bonds they develop with others.

In this AnimalWised article, we look at the different types of dog greeting behavior. We understand their origins and their functions so we can get to know them better and improve our bond.

You may also be interested in: Types of Gorillas
Contents

As with human beings, a dog's greeting is a ritual or ceremony. It is firmly embedded in their species, but it can also be affected by their environment. Canine greetings are made when the dog meets another member of their family, as can be seen when we come home from work or simply walk downstairs in the morning. Dogs also greet other dogs, even if they do not belong to the same social group.

Puppies will greet adult dogs and other puppies, showing us how ingrained is this behavior. Since there are so many ways dogs can interact, it is helpful to categorize the different types of dog greetings:

Of course, a dog will also get to know human beings and consider them their family once a bond is established. The same can happen with other animal species if they have been well socialized as a puppy or adult.

How do dogs greet each other?

Greetings between dogs that know each other well involve a ceremony of different gesture and body postures. The animals will be relaxed and confident, touching and sniffing each other. Some may even be quite excited if they haven't seen each other in a while. They might jump on each on each other or invite them to play. This is usually done by adopting the ‘downward dog’ position.

When two dogs which are unfamiliar with each other are greeting, they will be colder and more distant. The body language they use will not be as relaxed since each animal will be waiting to observe the responses of the other. Some dogs are very sociable and may immediately try to play, but only if they other dog is responsive.

If a dog has not received adequate socialization, they may not be able to greet properly. There is a high probability that the dog which is not well-socialized will bark, run away or even display as hostile or aggressive attitude. This is evidence as to why proper socialization is vital for a dog's well-being.

Why do dogs greet each other?

In addition to the aforementioned reasons, dogs greetings carry out a very important social function when carried out by members of the same pack. In the wild, this will be the members of their social group, for domestic dogs it will be their adopted family. One aspect of this social function is to reinforce the hierarchy of the group. In the wild, observers can see which is the leader of a pack of dogs by looking at how they greet each other.

Less dominant members of a group will lick the air and try to appear smaller in face of the dominant member. The latter will have an upright, calm and relaxed posture. The less dominant dogs behave similar to a puppy meeting an adult dog.

Of course, these displays of dominance are between animals of the same species in the wild. While domestic dogs will have some sort of hierarchy, it is not the same and they do not try to assert dominance with humans or members of other species. The greeting a dog carries out with a human will bely some of the aspects of their relationship, but it will not be in the context of leadership which wild dogs display with each other.

How do dogs greet humans?

Although dogs have different ways of greeting each other, it is important to know that how a dog greets a human says a lot about their personality and well-being. It also speaks volumes about the relationship the dog has with the person, whether it is someone they know or a stranger.

When a dog greets their guardian or someone in their close environment they know well, it is likely they have a strong emotional bond. If the bond is not good or something has affected it, you will see they become scared all of a sudden or display other signs of anxiety. We need to be observant of any such changes in how they interact with us, included in how they greet us.

A healthy dog will greet someone they know in various ways according to their personality. For example, energetic dogs might run on the bed and try to initiate play. More sedate dogs might come up to us and gently rub against our leg. They will give signs of being happy such as wagging their tail, staring up at us and may even lick us. Generally, the dog will be relaxed in posture and have a happy facial expression.

When dogs meet strangers, they may be equally excited to greet them and say hello. While a dog's breed will have an influence on their personality, dogs which do this are most commonly those which have had positive experiences with humans in the past, have been well-socialized and have received a proper canine education. Although they will treat their family differently, they may still be very sociable with strangers.

Greeting humans is only one part of the many signals domestic dogs will send to people. When they are happy, depressed, confused or feeling any emotion, they will show this through their body language. We can use their willingness to greet a person, or lack thereof, as a parameter to measure their relationship to other people, whether family or strangers.

Some dogs may jump up on people they meet in excitement. While some families will tolerate this behavior, many don't. We explain more in our article on tips to prevent dogs from jumping up on people.

Why won't my dog greet me?

Although greetings are part of canine behavior and are of great importance to dogs, not all of them greet their humans in the same way. If your dog has never greeted you in an excited manner, they may simply be a dog which doesn't get excited easily. Each relationship is different and is dependent on the personality and experiences of all those involved.

However, if a dog usually greets us and suddenly stops, we need to work out why. It is possible they have experienced some recent trauma, they have cause to be stressed or there may even be a physiological reason for it. Also, as a dog ages, their behavior changes. This could be due to normal wear and tear of age, but it may also be related to neurodegenerative diseases in dogs.

If your dog changes their behavior suddenly, then it is our responsibility to understand why. If you cannot determine the cause, take them to a veterinarian to reach a diagnosis.

How to greet a dog properly

As explained above, greeting dogs differs depending on the familiarity we have with them. Even in dogs we have spent a lot of time with, it may be helpful to have a refresher on how to greet them properly:

How to greet an unfamiliar dog

Before approaching an unfamiliar dog, it is important to observe whether they are receptive or not. In the same way that we would not like someone to suddenly approach us to pet us, many dogs also don't appreciate it. If the animal seems receptive, we can approach slowly so as not to scare them or convey the wrong attitude.

At all times we must remain calm to convey security and confidence, avoiding sudden movements. When we are close, we will let the animal come to smell us and take the first step. If he smells us and seems satisfied, we can pet them on the neck area, not on the head or muzzle unless we are totally sure that the dog will positively accept our gestures.

How to greet a dog when you get home

The answer to this question will depend entirely on the relationship you have with the dog. Some dogs, as we have said, remain calm and wait for their humans to come to say hello. In these cases, as the animal shows a totally calm attitude, it is possible to greet them with petting, words of encouragement, etc. Other dogs tend to greet their humans more effusively. If you stay using the postures listed above, you can respond to the greeting without any problem.

Now, if your dog greets profusely, urinates when he sees us or jumps on people, they may be suffering from separation anxiety. This means when we are gone, the dog is scared we won't come back or has an inability to spend time on their own without fear. We have an article where we deal with the causes and treatment of separation anxiety in dogs.

Specifically in terms of greeting a dog with separation anxiety, we need to be sure we don't encourage this kind of behavior. Only pet them when they are calm and don't stimulate their excitement further.

How to teach a dog to say hello

Dog greetings between each other display innate behaviors which they know naturally how to perform correctly. When puppies are separated too early from their mother, have poor socialization or have experienced trauma in the past, their ability to greet properly can be affected.

A dog which is dealing with these issues might greet too effusively, jump up on people, urinate inappropriately or even display aggression. We need to find the reason why this is happening by looking at reasons they may be stressed, if there is any change in their routine or if there is anything hindering their ability to interact with others properly.

How to greet properly is part of a dog's basic training. If they are having trouble and we cannot train them to behave appropriately, we may need to seek the advice of an ethologist. They will be able to look at the dog's circumstances and provide ways to help the dog overcome their problems.

If your dog has a hard time interacting with other canines, you might want to take a look at our video on how to introduce two dogs to each other:

If you want to read similar articles to Types of Dog Greeting Behavior, we recommend you visit our Facts about the animal kingdom category. 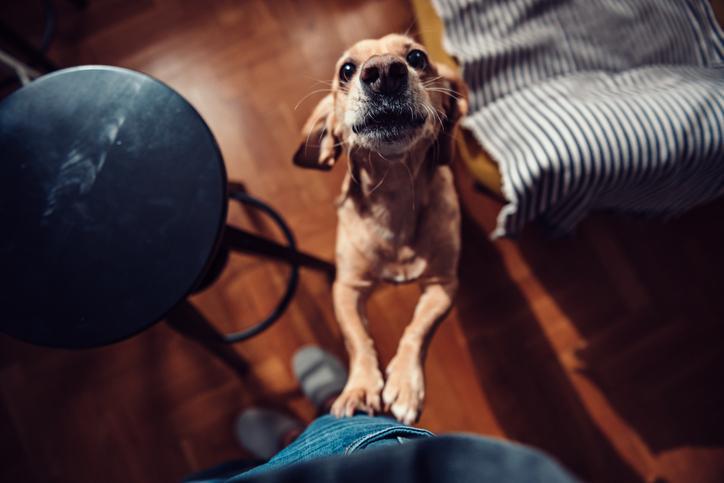 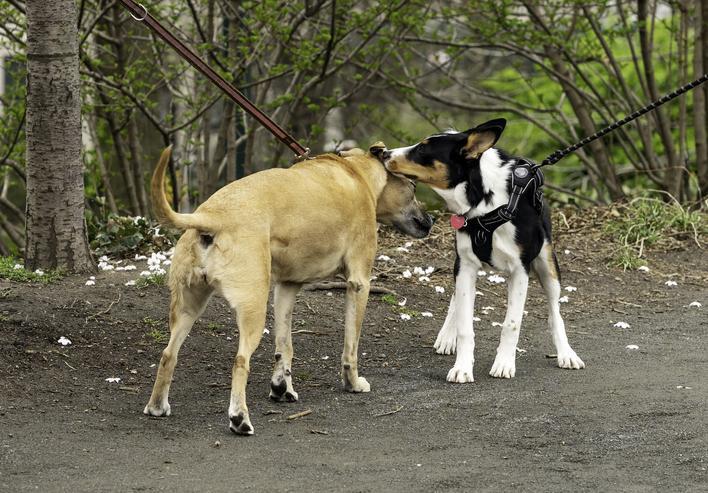 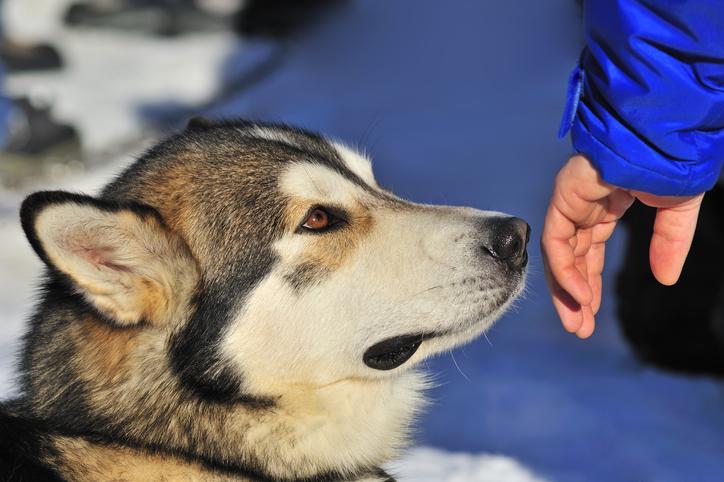 1 of 3
Types of Dog Greeting Behavior
Back to top