What Animals Sleep Standing Up?

By Nick A. Romero, Biologist and environmental educator. February 21, 2021 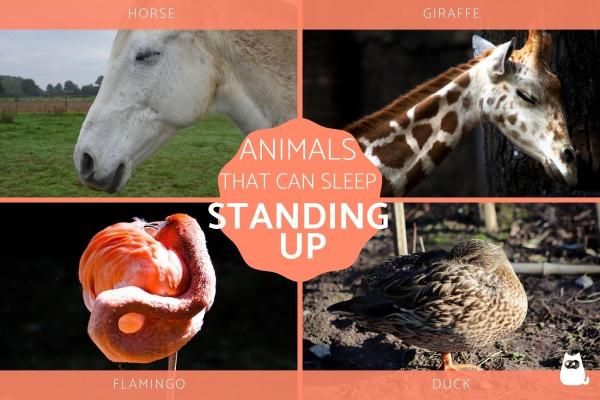 The natural world never fails to amaze us with the wide range of fascinating animal behaviors. The incredible feats some animals can perform with only their instinct to guide are incredible and can help us humans better understand the world around us. These behaviors don't occur in a vacuum. They are a result of their adaptation to different environments and means of survival. One ability which we humans do not possess, is the ability to sleep standing up.

At AnimalWised, we ask what animals can sleep standing up? Not only do we provide a list of examples, but we explain how this ability is manifested in various animal species.

You may also be interested in: Do Giraffes Sleep Standing Up?
Contents

Why do animals sleep standing up?

You may have observed animals either in the wild or in captivity where they appear to be sleeping standing up. It may be difficult to tell if an animal is actually sleeping, but different animals will sleep in different ways. In the wild, sleeping standing up is a necessary act due to help them against the possible dangers in their environment.

Many prey animals are unable to take refuge and hide from predators, particularly animals which live on plains. If they were to lie on the ground to sleep, getting up can take time. This time might be enough to give their stalking predator the advantage. By sleeping standing up, animals can make a quicker escape. Strategies such as sleeping on their feet allow certain animals the ability to remain more secure when they rest.

The fact that some animals sleep standing up doesn't necessarily prevent them from lying on the ground. One common example of animals that sleep standing up is the horse. When they sleep standing up, they can keep their body at rest and conserve energy. However, this type of sleep is considered non-REM sleep. Since this is not a deep sleep, they are better able to register threats in their environment and make a quick move. The horse still needs deep sleep REM, something they cannot have standing up, so they will need to lie down at certain times.

Scientific studies on a cow's ability to sleep standing up show they also need to lie down for REM sleep. Doing so allows them to optimize their rumination process and produce more saliva, something important to aid their digestive processes. Additionally, laying down improves blood supply to the udder, in turn improving its function in milk production.

How can animals sleep standing up?

Each type of animal that can sleep standing up is able to do so due to various anatomical mechanisms. One of the main factors is the ability to remain upright while being asleep. Many animals, including humans, cannot sleep standing up because their muscles relax when their mind is at rest.

Horses are able to maintain a standing position while asleep due to their ability to lock their stifle joint. This is the joint which connects the femur, tibia and kneecap in certain quadruped animals. When this joint locks, it helps the horse to support its weight, even if the muscles are more relaxed. Our article on how horses sleep will help explain in more detail.

Many birds belonging to the order Passeriformes (encompassing more than half of the world's bird species), such as canaries, pigeons, quail and crows, have a flexor tendon. This is located in the posterior area of the leg which stretches and tenses when the animal bends it to perch somewhere, giving the necessary rigidity for the stabilization of the body. When this mechanism is activated, the bird is able to hold their position firmly without falling when asleep. A particular aspect of these species is that they have control over this mechanism, being able to control it at will.

Other birds, such as flamingos and storks, can also sleep standing up. Even more impressive is their ability to do so standing on only one leg. The anatomical mechanism which allows them to do so is due to their legs which are effectively locked in place when situated at the center of their body weight, aided by bony articulations in the joints. Some studies suggest this ability means it takes less energy to sleep on one leg than on two[1].

This ability may appear to help the flamingo to reduce caloric expenditure during low temperatures. In higher temperatures, they are seen to be sleeping using both legs. When sleeping standing up on one leg, it is difficult for them to take flight. This suggests it to do with protecting themselves against low temperatures, not as an alert mechanism, as was believed for a long time.

So far, we have only discussed terrestrial animals. If you want to know more about animal behavior, we explain how fish are able to sleep in this AnimalWised article.

Examples of animals that sleep standing up

Here is a list of animals that sleep upright:

Although these animals can sleep standing up, it doesn't mean they necessarily do it exclusively. It is possible they will also sleep lying down, but it it may be only for deeper REM sleep.

How long do animals sleep standing up?

Just as each species will have anatomical differences which allow them to sleep standing up, their sleep patterns also vary. In the case of horses, they will sleep for short periods throughout the day. Cumulatively, they will sleep a total of about two to three hours. Elephants usually sleep slightly less than this at about two hours. They mainly do this at night and it is common for some in the herd to remain awake to stay alert for danger.

Cows generally sleep for four hours per day in total and they usually do so during the night. As mentioned previously, although cows can sleep standing up, they achieve different benefits when laying down to sleep.

Animals develop various strategies to give them benefit in the wild. In nature, they are exposed to various situations in which they can be vulnerable. Survival is their main task and being able to do so means taking every advantage they can. As we have seen, their ability to sleep standing up is one such advantage. But not all animals share the same abilities, we may even ask are there some animals which don't sleep at all?

Also, some animals will need to conserve more energy than others. This is due to various reasons including metabolism and activity levels. You can find out more in our article on 15 animals that sleep a lot.

If you want to read similar articles to What Animals Sleep Standing Up?, we recommend you visit our Facts about the animal kingdom category.

What Animals Sleep Standing Up? 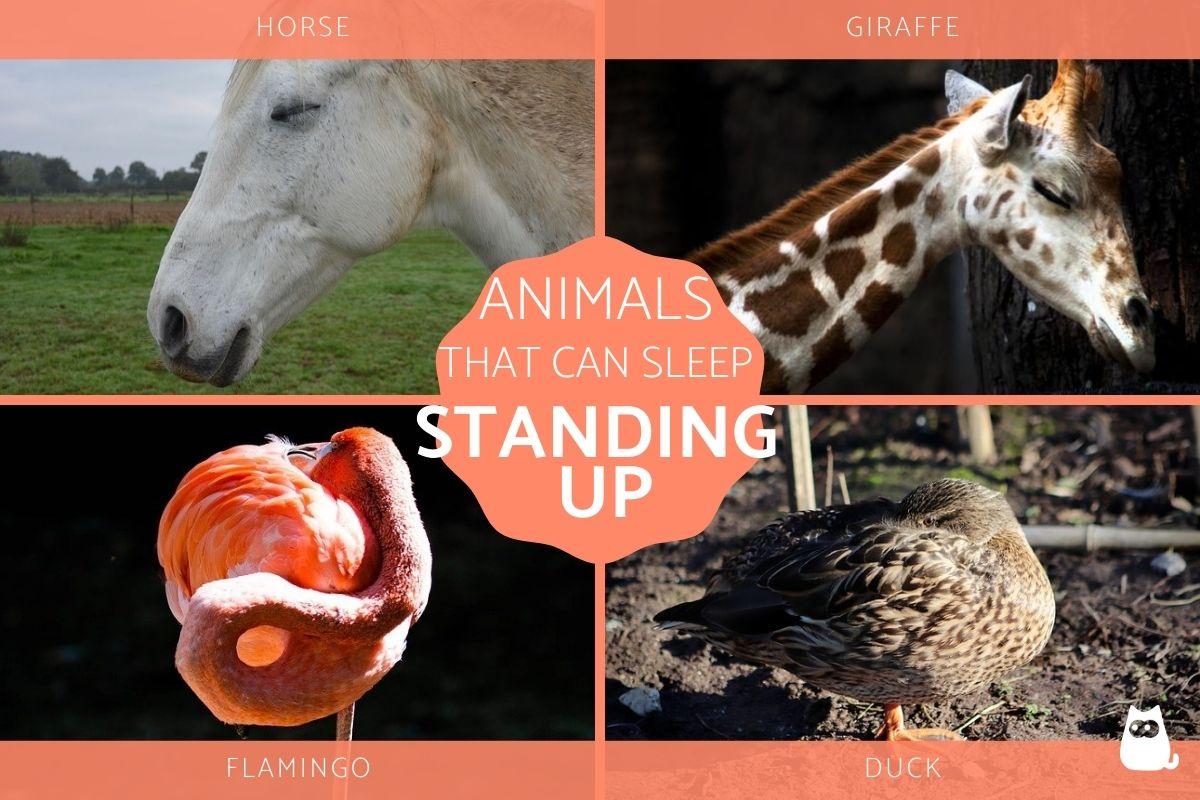 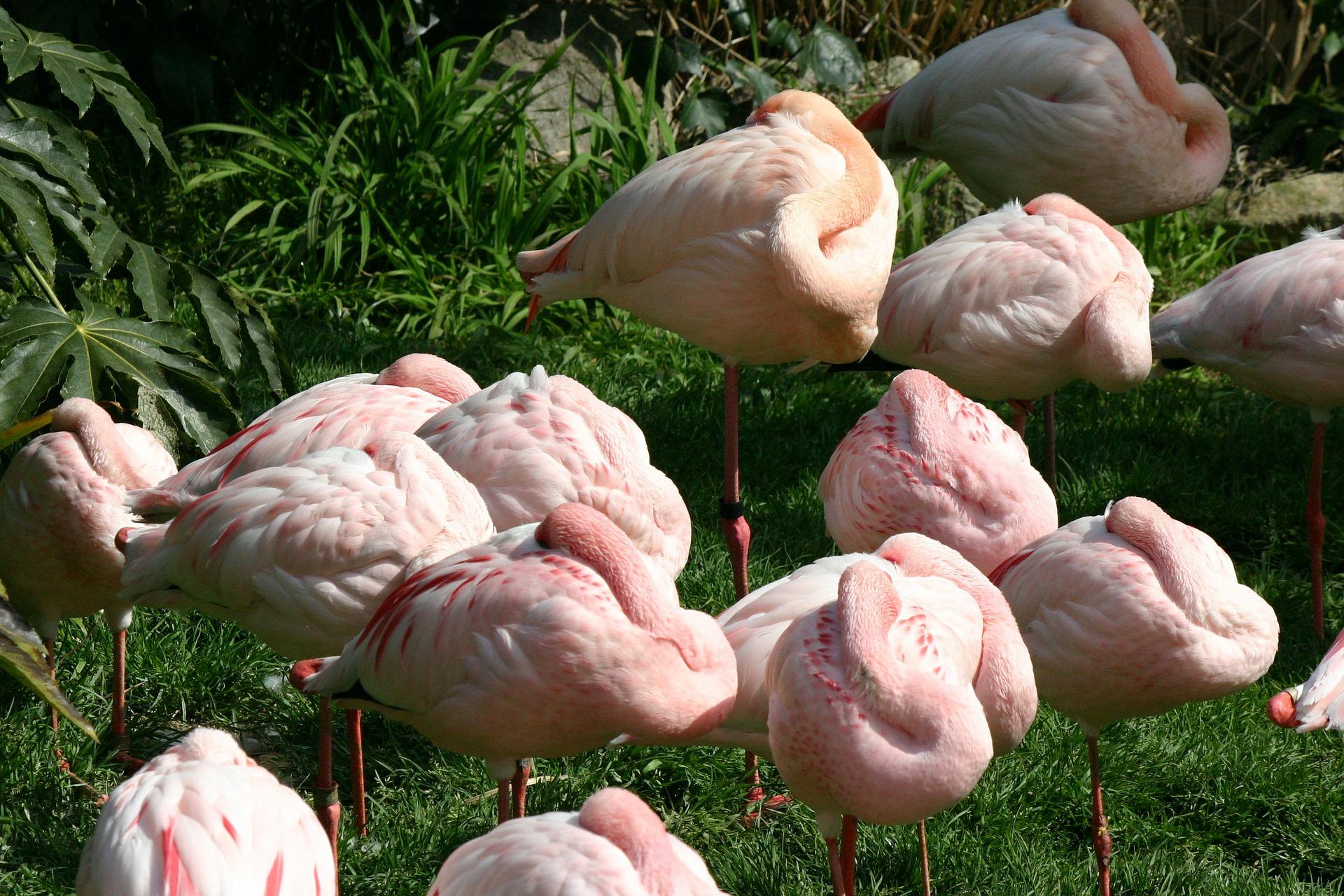 1 of 3
What Animals Sleep Standing Up?
Back to top