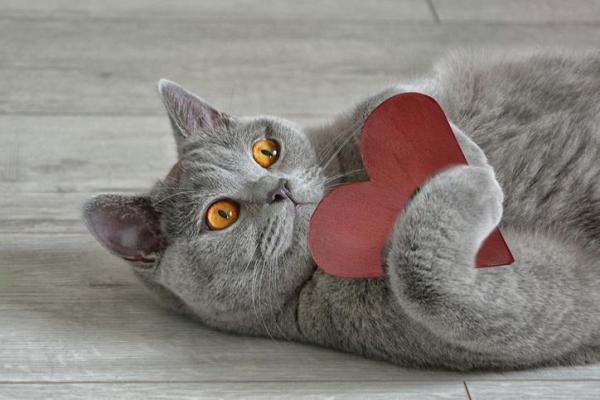 Grey cat breeds often have a charm which is much greater than simple pigmentation of hair follicles. Every cat, whatever they look like, has a unique personality which shows that substance will always outweigh style. However, there is something particularly beautiful about many gray cats. Whether they are a grey cat breed with longhair or shorthair, whether they have sparkling blue eyes or deep green peppers, the grey can accentuate other features while also being stunning in its own right. Grey cat breeds with yellow eyes, in particular, have a piercing gaze which makes them look quite remarkable.

AnimalWised looks at 8 breeds of gray cat with pictures to show you exactly what we mean. You will see the range of variety of these breeds, with many unique features and beautiful traits. We'll also give some additional information on these breeds which has nothing to do with the color of their fur.

We are going to start our list of grey cat breeds with those which have blue eyes. They include:

Persian cats contain much diversity within the breed, perhaps most strikingly so. This is because of the difference between Traditional Persian cats and those with peke-face typing, the latter resulting in various degrees of shortening of the nose and palate. Descended from the Turkish Angora, they are one of the most sought after and popular cats worldwide. Healthy cats can sometimes have a large appearance, but this is more to do with their rounded heads, muscular frame and famously long coat.

The coats of Persian cats have an almost unlimited variety with tortoiseshell, calico, tabby and smoked patterning being as common as solid color cats. Himalayan cats are a type of Persian breed which have the characteristics of other Persian cats in their mouth shape, hair length and general behavioral traits. However, they always have a pointed coloration which means their coloring is darker at the extremities when compared to their body. They can come in chocolate, lilac, seal or even red. But the blue point Himalayan cat has a grey coloration in appearance, giving it a unique and beautiful look. All Himalayan cats have blue eyes and are noted for their docile behavior.

It is easy to stereotype the Turkish Angora as being a solid white cat as there are many examples of this coloration. However, there is much more variety in terms of coat color. As the name suggests, this gray cat breed originates from Turkey. They are a very healthy cat breed which is noted for having relatively few congenital health problems. This doesn't mean they don't need the right care to maintain their health, regular grooming of their long coat being one important element.

The Turkish Angora has fine, soft and silky fur, generally more abundant in the neck and tail. Additionally, its hind legs are taller than their front. They have long ears and are particularly sensitive to ambient noise. Although you can find grey Turkish Angora cats with blue eyes, it is also possible to find specimens with green and yellow tones.

While the colorpoint pattern of the Himalayan is distinct in its own right, there are other types of patterns which include stripes, lines or other unique features.

The Egyptian Mau is one of the most fascinating breeds of cat in existence. This is not just for its interesting physical characteristics, but also the rich and storied history which comes with it. ‘Mau’ is of Egyptian origin and they were venerated in this region for thousands of years. However, there is some uncertainty of their true origin, with possible European and/or North American origins. What is known is that it is the only domestic cat with naturally occurring spots on their coat.

This breed has immense green eyes and a coat with very particular markings including the aforementioned spots as well as stripes and two varieties of forehead markings. They come in about three different colors, but the silver is perhaps the most common. This gives them a beautiful gray color with darker gray markings giving them a beautiful wild appearance. They can be a very territorial breed, but they are very affectionate and playful with members of their family. This playfulness extends to their physical agility as they are also recorded as being the fastest cat breed.

This feline breed has won the hearts of many cat guardians around the globe. Much of this is to do with its very friendly and sociable personality, as well as having lots of power and intelligence. All of these attributes make the American Shorthair a very attractive cat in terms of both looks and temperament.

In respect to these physical characteristics, this breed is noted for their rounded head, short ears and small nose. They are not the most agile, but do have a string build which makes them good for ratting and mousing. They can weigh up to 6 kilos, making them a medium-large sized cat. Their coat is short as their name suggests and can be of almost any color. However, those with silver tones appear to be the most popular and warrants their place on this list of gray haired cat breeds.

Another case of the naming of a cat breed being a little misleading, the European Shorthair also has African roots in its lineage. It is believed they extended to Europe after migrations between the continents occurred over time. In terms of appearance, the European Shorthair doesn't have a standard size or specific color. There are a great variety of felines which fall under this bracket.

However, many of them popularly come in the tabby or striped variety. The stripes are of a darker color than the rest of the coat, with grey European Shorthair cats displaying various degrees of silver and grey.

Cats of this breed love outdoor activities, often hunting rodents and birds of all kinds. They climb trees and like to scale high points, but are not always as adept at coming back down to earth again. They will bond well with families, but are relatively independent and are considered to be a healthy breed.

While you won't be likely to see a Smurf colored cat anytime soon, there is a distinction made by cat breeders in terms of the tonality of grey coats. Some of them have a bluish hue which makes them greatly appreciated by cat fans all over. This is not to say that all cats aren't beautiful in their own right.

You may not be as familiar with this breed as others considering it's relative scarcity. The Nebelung cat is a breed which inherited many of the best traits of the Russian Blue but has a longer coat. This means they have a strong and robust musculature, partly hidden by a bluish gray longhair coat. They have a characteristic large head with colors ranging from green to yellow.

Despite their long and elegant appearance, they can be mischievous and curious cats and are almost always willing to engage in playtime with their human companions. Additionally, the Nebelung is a very intelligent and sociable cat, making it possible to train them in certain behaviors. It is necessary to brush them frequently so they maintain a healthy coat free of dirt and tangles.

The progenitor of the Nebelung, this breed is believed to be of Russian origin, some sources tracing it to the area of Arkhangelsk Oblast (Archangel federal region) in the north of the country. They later spread to Europe and eventually made their way to North America. Due to the extreme climactic conditions of the region, Russian Blues developed a thick coat for protection. They weigh up to 5 kilograms (11 lbs) and can live anywhere between 10 and 15 years of age.

Russian Blue cats commonly have green eyes, although all are born with blue eyes as kittens, only changing hue as they develop. The blue of their name comes from the striking bluish gray color of their coat. They can be shy with strangers, but are very affectionate with their human companions. They are also very playful and noted for their tendency to chace things.

Another robust and well toned gray haired cat, the Chartreux is an excellent pet for those who live alone. They are sociable, friendly and very playful, but not overly energetic. They tend to bond with one person and are mild-mannered, but still need lots of engagement and stimulation. This can involve training as they are also a particularly intelligent breed.

This breed originates in France where Carthusian monks bred it into existence. They later came to the United Kingdom, but almost became extinct during the Second World War. They managed to survive and recover their population through active breeding.

Like the Russian Blue, they have thick and dense fur due to the climate of their homeland. Their coloration can be more gray than blue or vice versa and their eyes vary from intense yellow to green or copper.

If you want to read similar articles to 8 Gray Cat Breeds, we recommend you visit our Comparisons category. 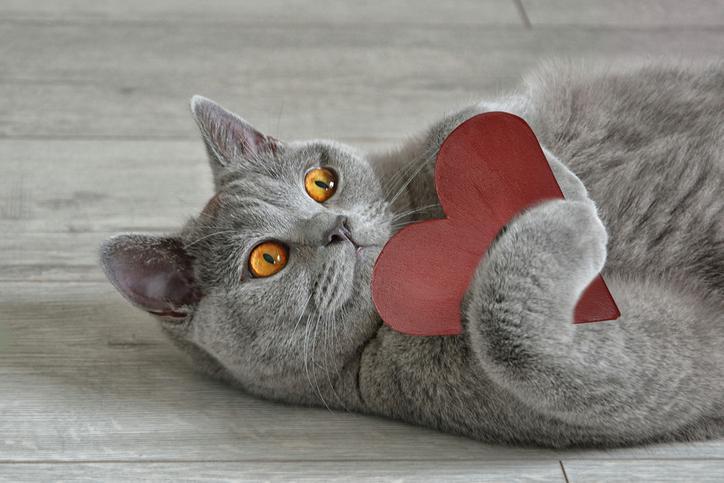 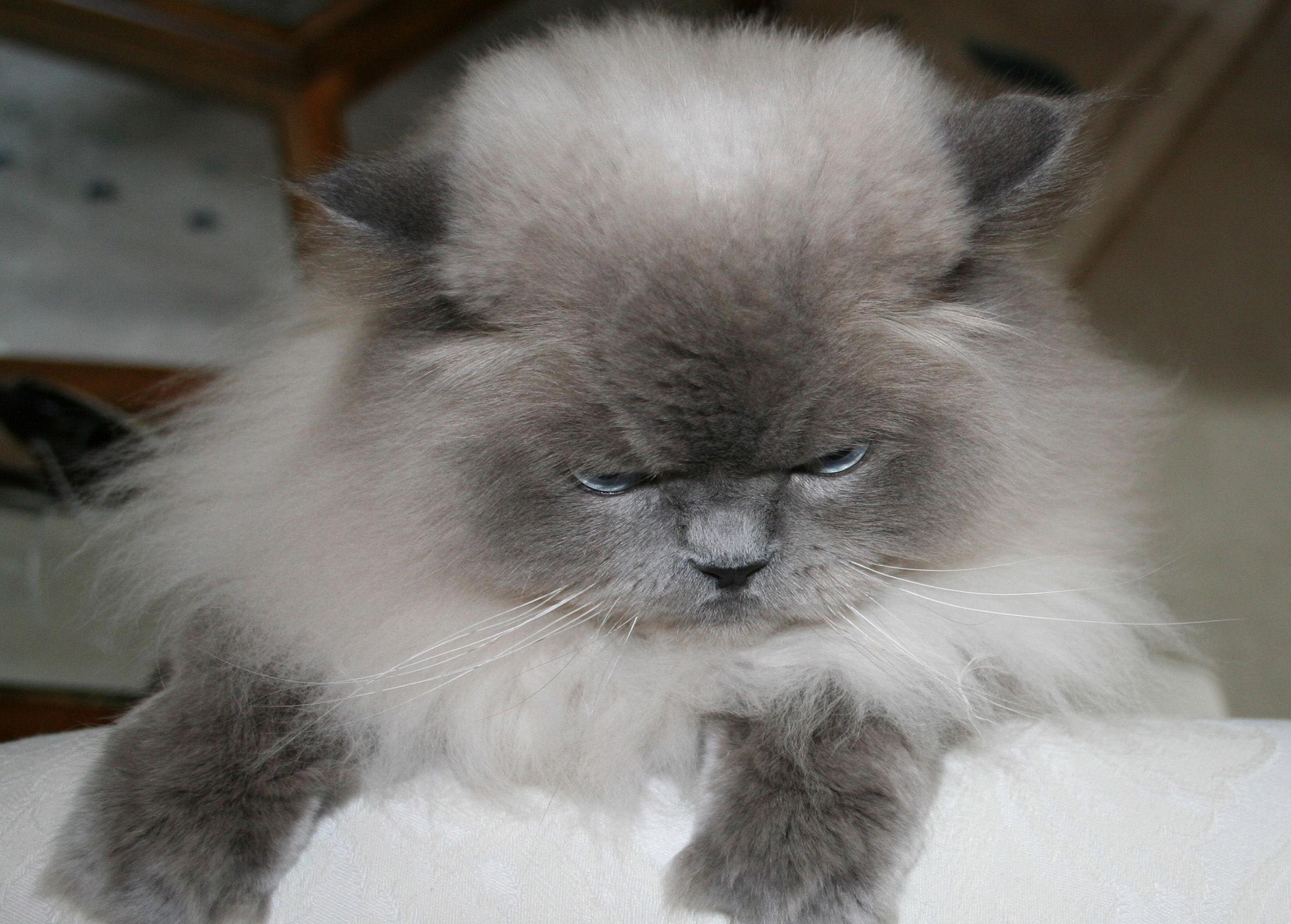 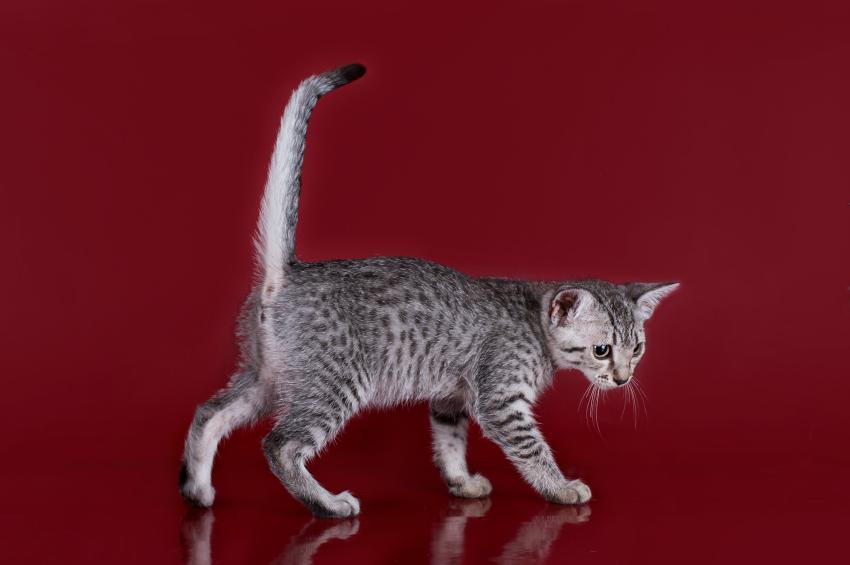 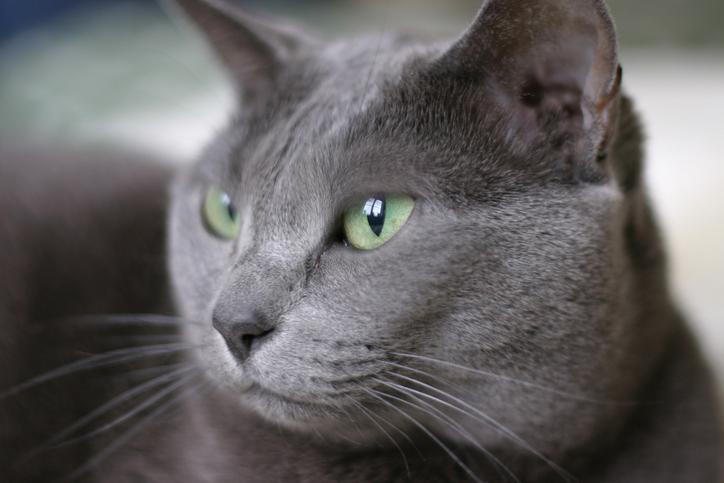