Petting our cat is not only an enjoyable experience for both animal and guardian, it is an important practical resource in caring for our cat's well-being. It allows us to enrich the emotional bond we have with our cat and it provides the opportunity for observing certain clinical symptoms. A subcutaneous lump can be one of the most worrying such symptoms as it can imply the presence of cancer. However, there are many types of cat cysts which can result in a lump or tumor, without being malignant.

At AnimalWised, we look at cat cyst types, causes and treatment. We find out the five main cat cyst types and discover the level of threat each provides for the cat's health.

You may also be interested in: Panniculitis in Dogs - Causes, Symptoms and Treatment
Contents

What are cat cysts?

Cysts are a type of neoplasm, i.e. an abnormal growth of cell tissue. Different types of cat cysts result from an overgrowth of different types of cells. The nature of these cells will determine the threat they provide for the cat's health. This is the case with malignant cancer cells which not only affect the area of the lump, but can spread to other tissues via metastasis.

Benign tumors are also due to the overgrowth of cells, although they aren't cancerous. This does not mean they cannot cause problems. If the size of the tumor is significant, it can put pressure on certain parts of the body which cause difficulty. For example, if the cyst is on the throat, it can make swallowing difficult and affect the cat's nutrition.

Other benign cat cysts can cause problems because they are located on sensitive tissue. This is the case when cysts grow on certain glands which then interfere with molecule production. An example is a cyst on the thyroid gland which can cause changes in hormone production, potentially resulting in physical and behavioral changes in the cat. We look at the different types of cat cysts below to see more examples.

Lipomas are also known as fatty tumors. This is because they are caused by the overgrowth of fat cells (the cells that grow adipose tissue). These masses of mesenchymal origin usually develop in the subcutaneous tissue. Generally, these lumps have a spongy, soft and firm consistency and can appear alone or in groups. They are mobile, meaning they can be moved on palpation.

Lipoma cysts are benign, but must be eliminated promptly. This is because their rate of growth is usually relatively fast and can cause discomfort or compromise certain tissue function. They do not have the ability to metastasize to other nearby or distant tissues.

Excision surgery is the method of eliminating lipomas in cats. After veterinary assessment, you may be able to choose surgical options or wait to see if the lipoma develops problematically. While surgical removal is preferred, it is understandable if it is cost prohibitive. If you do choose to wait, it is important for the lipomas to be reviewed regularly to determine whether removal is necessary.

We should take into account that the larger the lipoma, the more scar tissue the cat will have once operated. Size can also prolong the cat's recovery time.

Although not very common in cats, trauma can result in a cyst. These are sometimes known as false cysts and differ from true cysts. They are caused by a hemorrhage or trauma which does not resolve properly. Instead of dissipating, the fluid within the cyst builds up because there is not secretory lining. The fluid is cause by liquified dead tissue. If the false cyst is caused by blood collecting, it will be dark in appearance.

Treatment of false cysts in cats

In many cases, the inflammation caused by the false cyst will reduce of its own accord. It should eventually disappear, although some discoloration may remain. If the false cyst provides trouble for the cat, they can be removed by surgical excision.

Dermoid cysts are another type of subcutaneous neoplasm in cats which occur due to abnormal cell growth. They genetic in origin and are considered to be rare in cats[1]. This does not account for the likely many unreported or even undetected cases which may have occurred.

Dermoid cysts not only contain an overgrowth of cells, they can even result in the growth of matured solid tissues. These can include hair, teeth and bone. In humans, they are often associated with ovarian cysts, but there is not much evidence for this in cats. They are caused by defective closure of the epidermal skin layer, isolating itself in the dermis or subcutis.

Treatment of dermoid cysts in cats

After diagnosis, the only treatment available is surgical removal. Although relatively straightforward, care needs to be taken to make the right dissection of the cyst. This will need to be performed so carefully because we want to prevent the return of the cyst[2].

One of the most common types of feline cysts are sebaceous cysts. These are fluid-filled lumps which can ooze, especially if receiving trauma. They are raised from the skin and can appear similar to skin tags, another type of benign tumor.

The reasons sebaceous cysts develop is due to a problem with the hair follicle, often due to them becoming clogged with sebum or other material. When this happens, the cat's immune system tries to isolate the damaged follicle, resulting in encapsulation of fluid and the subsequent cyst,

Although they are not caused by an infection, they can become infected if they rupture and bacteria is allowed to enter. This is often due to being knock when the cat is moving or even when the cat grooms themselves. Sebaceous cysts in cats can develop on any part of the cat which has hair follicles. They will need to be diagnosed by a veterinarian in case they are confused for a different type of cat cyst.

Treatment of sebaceous cysts in cats

It is important to note that sebaceous cysts in cats are benign. They only usually cause a problem if they become infected, but they may be ignored in many cases. If the cyst continues to grow and fill with fluid, it can become larger and rupture. If the veterinarian does decide to remove the cysts, a more aggressive treatment of surgical removal will be possible, but it is considered minor surgery.

Learn more with our article on why a cat has a lump on their neck.

It is important to note that cysts themselves are not carcinogenic. They are not malignant and won't metastasize. However, there are types of cat cysts which house the genetic material which can develop into malignant tumors which can then spread to the rest of the body. These types of cyst can appear subcutaneously, in which case we will be able to feel them when we pet our cat. They can also develop internally, something which is harder to observe.

When the cyst appears on the skin, it can develop into a type of feline skin cancer. Some of the most common in cats are the following:

Treatment of malignant cysts in cats

Treatment will depend on the severity of the cancer. It will require surgery, chemotherapy, radiotherapy or some combination thereof. In cases of metastasis, the prognosis will be poorer. In some cases, this will result in the euthanization of the animal.

If you want to read similar articles to Cat Cyst Types, Causes and Treatment, we recommend you visit our Skin problems category. 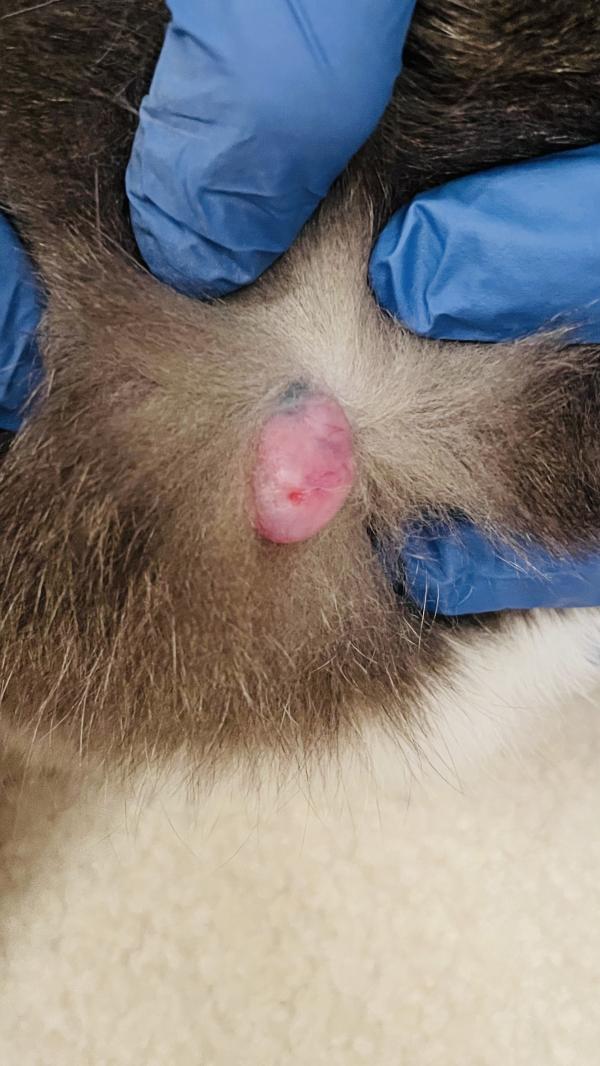 Male cat 11 years old with this growth on right hind lower leg, only noticed two days ago.
No sign that it is worrying him?

We cannot diagnose this problem and there are various reasons for such a neoplasm. Unfortunately, it can be very difficult tot ell the difference between benign and malignant tumors. This is why a veterinary consultation is necessary. 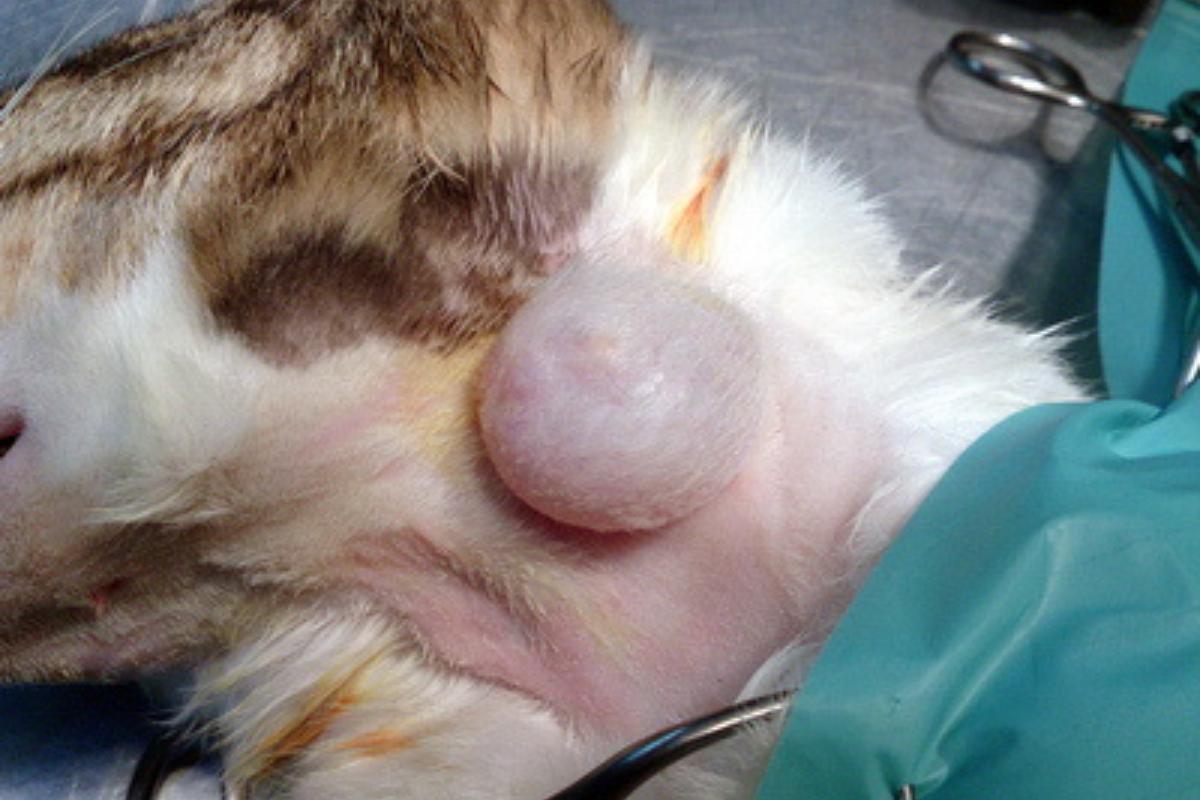 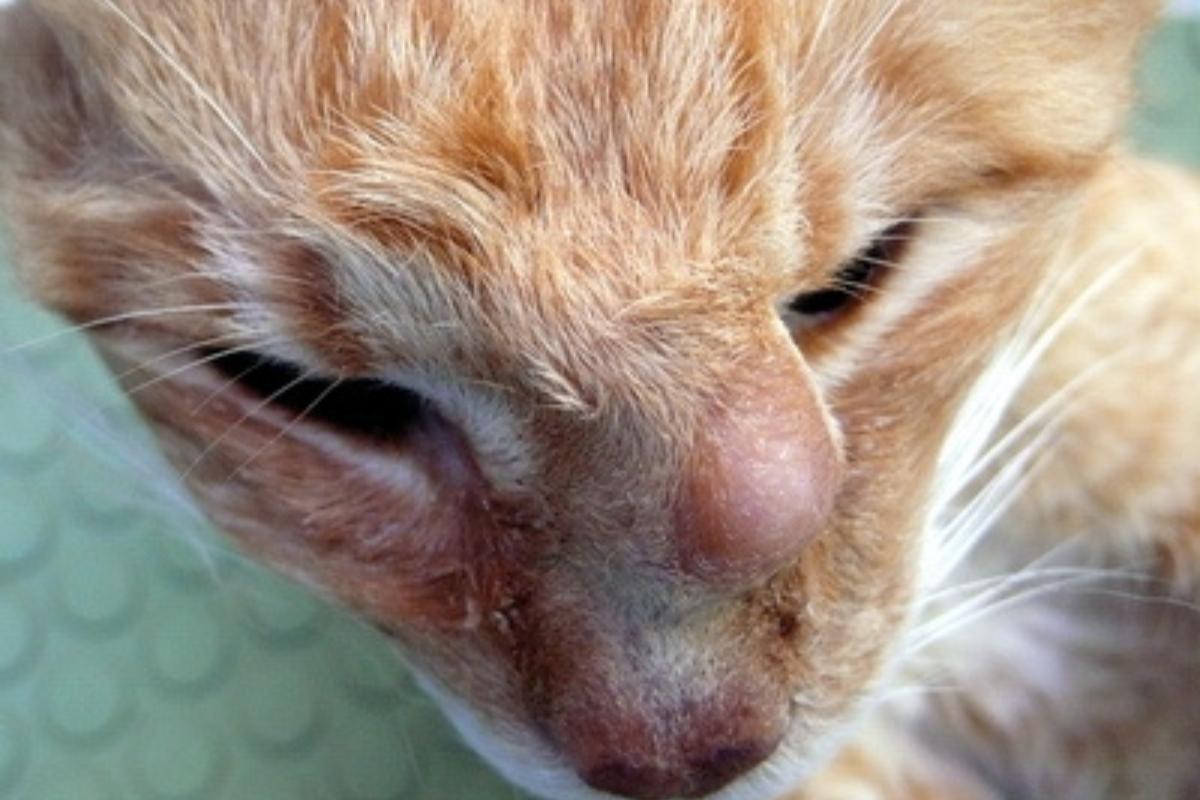 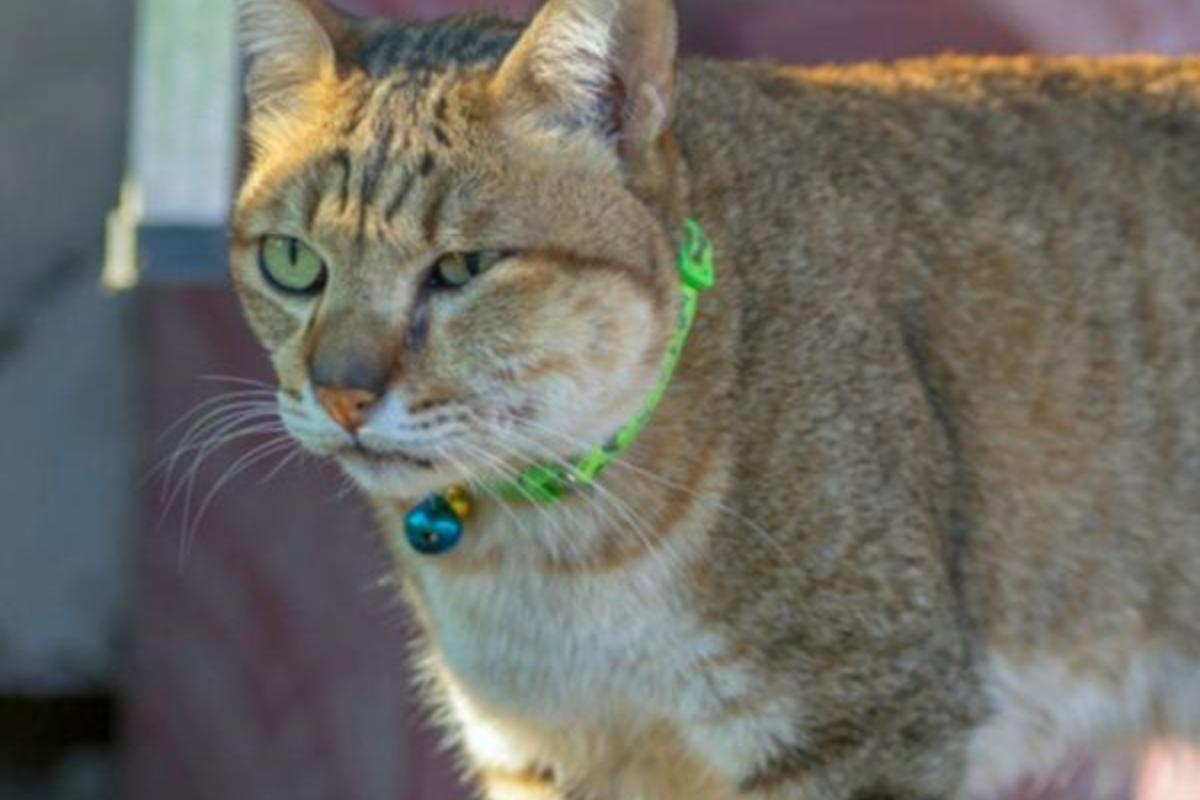 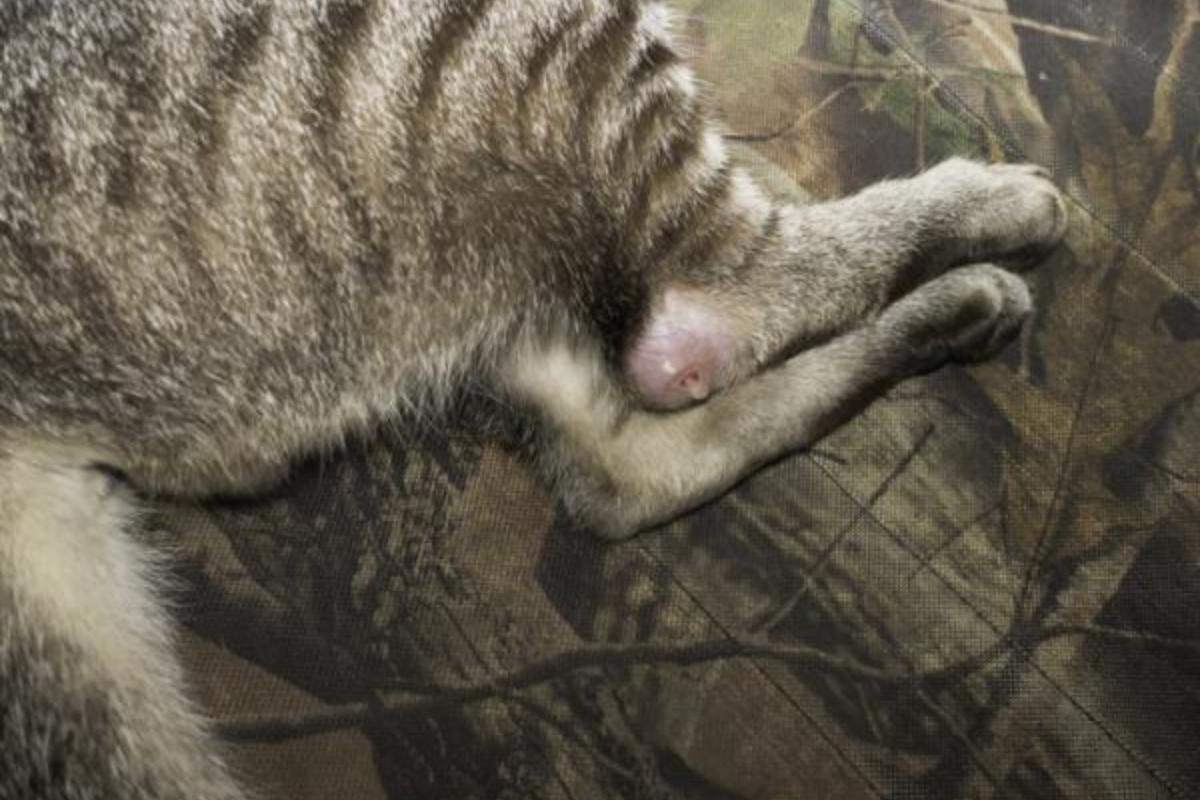 1 of 4
Cat Cyst Types, Causes and Treatment
Back to top