Differences Between a Male and Female Cockatiel

Are you thinking of adopting a cockatiel into your home? If so, you may be wondering if you should adopt a male or female cockatiel. You may wonder if their sex matters when adopting a bird into your family. For guardians who already have the pleasure of sharing their lives with them, they may wonder how to tell the difference between a male and female cockatiel.

If you want to know the differences between a male and female cockatiel as well as which is better for you, keep reading AnimalWised. We explain the care requirements for these beautiful birds and how their behavior might affect your decision. We want to encourage everyone who is considering adopting a cockatiel to reflect on the responsibility of doing so.

You may also be interested in: Differences between Male and Female Parrots
Contents

Caring for a cockatiel

Before welcoming a cockatiel into the family, regardless of whether they are male or female, it is important you consider their general care requirements. As soon as you bring them into the home, their well-being is your responsibility and not meeting this responsibility will have direct consequences. Such consequences include physical and psychological disorders which are fatal if not addressed.

The basic care needs for cockatiels include:

This article on signs of stress in parrots will help you to better understand how to both recognize stress in cockatiels and what we can do to avoid it.

Behavior of both male and female cockatiels

Cockatiels are not only beautiful and elegant birds, but they are also characterized by being very intelligent. Both male and female cockatiels have a very sociable and affectionate character. It is not surprising they have won the hearts of many animal guardians. Not only do they enjoy spending time with other birds, but cockatiels can form very strong attachment bonds with the people who care for them from when they are young.

Additionally, many cockatiels manifest a wide range of emotions. These include joy and anger. They express such emotions through both body language and vocalizations. Both male and females have a crest on top of their heads which can also be used to communicate intention or emotion. For vocalizations, cockatiels can scream, whistle, grunt and make many other sounds. It is even possible for them to make vocalizations which sound as if they are talking like humans.

Cockatiels carry out various behaviors to meet their needs. For example, their hygiene requirements mean they groom their feathers regularly. They will also groom each other regularly due to both practical and social needs. They will also play with the various toys you provide, as well as objects you have in the house which you may not consider toys. Such behavior helps them to satisfy their curiosity and they will call you to pay attention to them by throwing objects or calling you.

Should you adopt a male or female cockatiel?

Now that you know a little background about caring for cockatiels, you will likely want to know the differences between male and female cockatiels. Before we do, it is important to stress you can have a rich and rewarding relationship with any sex of cockatiel. The differences tend to be down to personal preference.

Although not a strict rule, males may have a more elaborate and attractive coloration than females. The reason for this is because they use their beautiful plumage to attract females. For this reason, male cockatiels are often shown to have brighter yellow tones and females will display more gray coloration. Both male and female cockatiels will have some mixture of grey and yellow in their plumage.

Cockatiels are singing birds. When attracting a mate, males tend to emit more melodious songs since they are usually the pursuer. They will also emit sounds as a means to practice for attracting a mate at a later stage. Since males will attract females, not the other way round, they will also perform courtship dances when they think they have met a suitable female mate. This also implies that males may have an easier time learning human speech and that females may generally be quieter. There are many exceptions in both cases.

Now that you know the main behavioral differences between male and female cockatiels, which do you think is more suited to your personality? The answer depends on your lifestyle and the type of bird friend with which you want to share your space. If you do not like a lot of noise, females tend to be calmer and may be the better option for you. If you love spending many hours of the day interacting with your cockatiel, a male may adapt better to your needs.

Both female and male cockatiels can learn tricks and be a great companion. Also, both will make some noise and both will need interaction. How much of either depends largely on the individual, but you can see some commony traits.

How can you tell if a cockatiel is male or female?

Cockatiels are small parrots and it is quite difficult to sex them, especially when they are young. This is because developing cockatiels have not yet formed their plumage and other body parts as they appear when adults. We also need to bear in mind that some female cockatiels will also sing a lot, so we can't simply assume a very vocal bird is male.

The truth is, it is very difficult to sex cockatiels. Even experienced bird owners can find it difficult to determine between males and females. The safest and most effective method of differentiating the sex of the cockatiel is to use DNA testing. This procedure requires sending feathers or a blood sample to a laboratory for testing. However, it is not a commonly offered service and can be prohibitively expensive.

There is another method of telling the difference between female and male cockatiels. It is called color inheritance and it requires us to know the color of the parent birds and whether they present sex-related plumage coloration. Certain color mutations such as cinnamon and pearl will be passed on only to certain sexes. This means we can tell the sex if we know their color. For example, if a male has cinnamon on their plumage and mates with a non-cinnamon colored female, we will know any offspring with the color will also be male.

Sexing other birds can also be tricky, as you an see from this related article on how to tell a male from a female goldfinch.

If you want to read similar articles to Differences Between a Male and Female Cockatiel, we recommend you visit our Comparisons category.

1 comment
Rating:
Ninel
28/02/2021
Very good article. Helped me a lot to make my decision. Good blog for many topics related to pets. Thank you for sharing your knowledge.

Administrador AnimalWised
11/03/2021
Let us know which you decide!
Differences Between a Male and Female Cockatiel 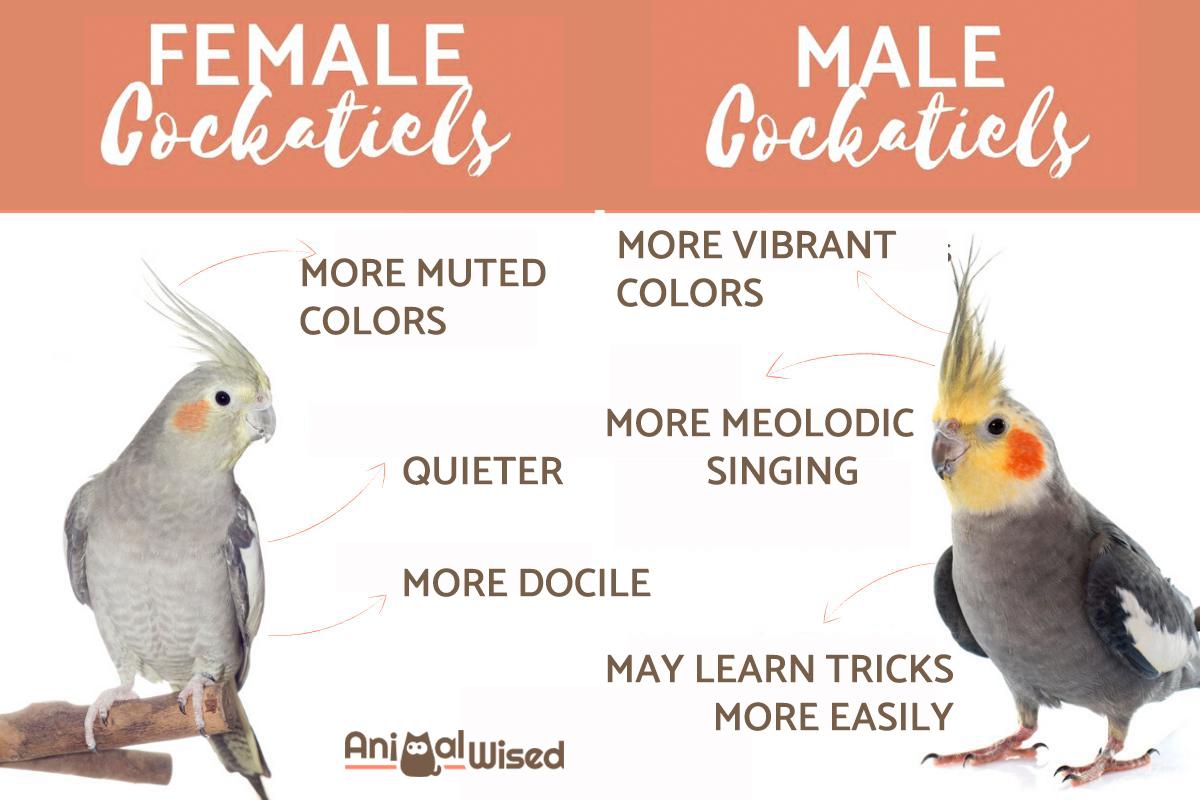