Differences Between Fleas and Ticks 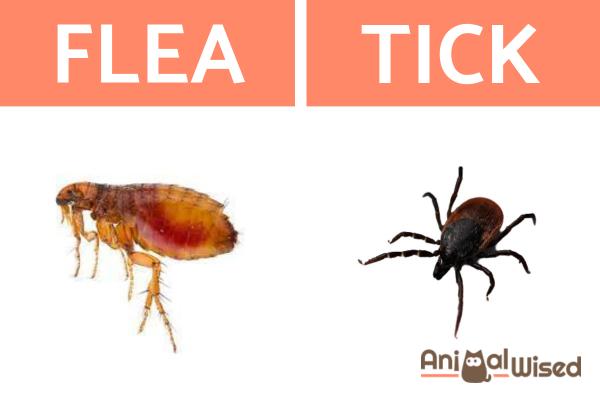 Both fleas and ticks are external parasites belonging to the phylum Arthropoda. Both live on and feed from their host animal, causing stress, irritation, and different health problems. They also can parasitize various animal species, including birds, mammals, and reptiles. Knowing the differences between fleas and ticks is critical to your pet's health, so you can take preventative measures and provide them with the best care possible.

The following AnimalWised article explains the main differences between fleas and ticks, their main characteristics and the dangers they pose to our pets.

Common characteristics between fleas and ticks

As we have already mentioned, both fleas and ticks belong to the phylum Arthropoda. The fact that they are both arthropods means that they share a number of common physical characteristics:

Additionally, both fleas and ticks are parasites because they need to feed and protect themselves. Thus, they began to colonize higher organisms (birds, mammals, and reptiles) and became hematophagous ectoparasites. They both prefer animals that have hair, because it serves as protection and shelter.

In order to adapt to parasitism, they had to develop binding organs that allowed them to stay on their hosts and feed on their blood. In the case of fleas, they have evolved lacinia, jaws with which they can pierce the skin of their host. Ticks have evolved the hypostome, a club-shaped mouthpiece with backward-facing hooks that prevent them from detaching from their hosts' skin.

Continue reading this other article if you want to learn more about other animals and insects with an exoskeleton.

Differences in the morphology of fleas and ticks

Fleas are insects, or more precisely, they are parasitic insects. As with all insects, their body is divided into three segments: head, thorax and abdomen.

Although fleas are insects, they do not have wings, having lost them during their development.

Ticks, also known as ixodid ticks, are small arachnids. The body of adults is divided into two segments: the gnathosoma and the idiosoma.

If you want to learn more facts about ticks and fleas, do not miss the following articles where we describe their life cycle in more detail:

Differences in the biological cycle of fleas and ticks

Another important difference between fleas and ticks is their biological cycle.

Fleas are holometabolous insects, which means they go through a complete metamorphosis. Their biological cycle goes through the stages of egg, larva, pupa, and adult. The adult females lay their eggs on the parasitized animal, which fall to the ground after a few hours. The eggs then hatch into larvae, which develop into pupae. Eventually, they metamorphose into adults that parasitize new hosts. It should be noted that only adult fleas are hematophagous and parasitic.

In contrast, ticks go through four developmental stages: eggs, larvae, nymphs, and adults. The gravid female lays the egg on the ground, from which a larva hatches and climbs onto the host. Depending on the tick genus, the different stages may develop in the same host or in different hosts, which in turn may or may not belong to the same species.

Differences in host specificity of fleas and ticks

The host specificity of ticks is also low, although slightly higher than fleas. The following are the major tick families and genera that parasitize our pets:

Differences in treatment against fleas and ticks

In case of flea infestation, both the environment and the animals must be treated:

In case of tick infestation, treatment can be done with different strategies:

How to distinguish a flea from a tick?

If you find an external parasite in your pet's fur but do not know if it is a flea or a tick, consider the following points:

If you suspect your cat or dog is infested with ticks or fleas, see your veterinarian immediately to determine the best course of action based on your pet's age, physical condition and environment. Delaying treatment can have serious consequences for your pet's health, which we will discuss in the following section.

Vinegar is an effective method for eliminating fleas from dogs with mild to moderate infestations. Continue reading this other article to learn how to treat an infestation of fleas and ticks with vinegar.

The importance of treatment for fleas and ticks

Domestic and wild animals should be protected from fleas and ticks, because:

If you want to learn more about the consequences that fleas and ticks can have on your pet, continue reading this other article where we explain the effects of ticks on dogs.

If you want to read similar articles to Differences Between Fleas and Ticks, we recommend you visit our Parasitic diseases category.

Differences Between Fleas and Ticks 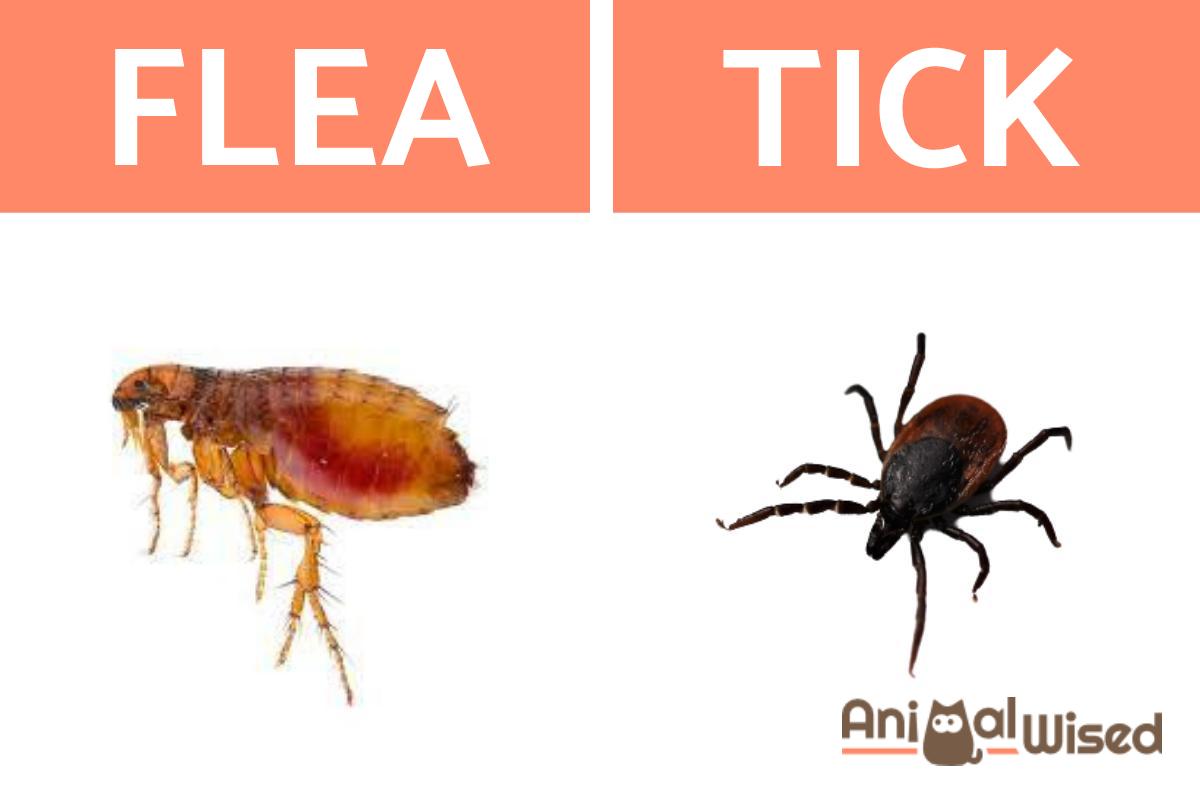 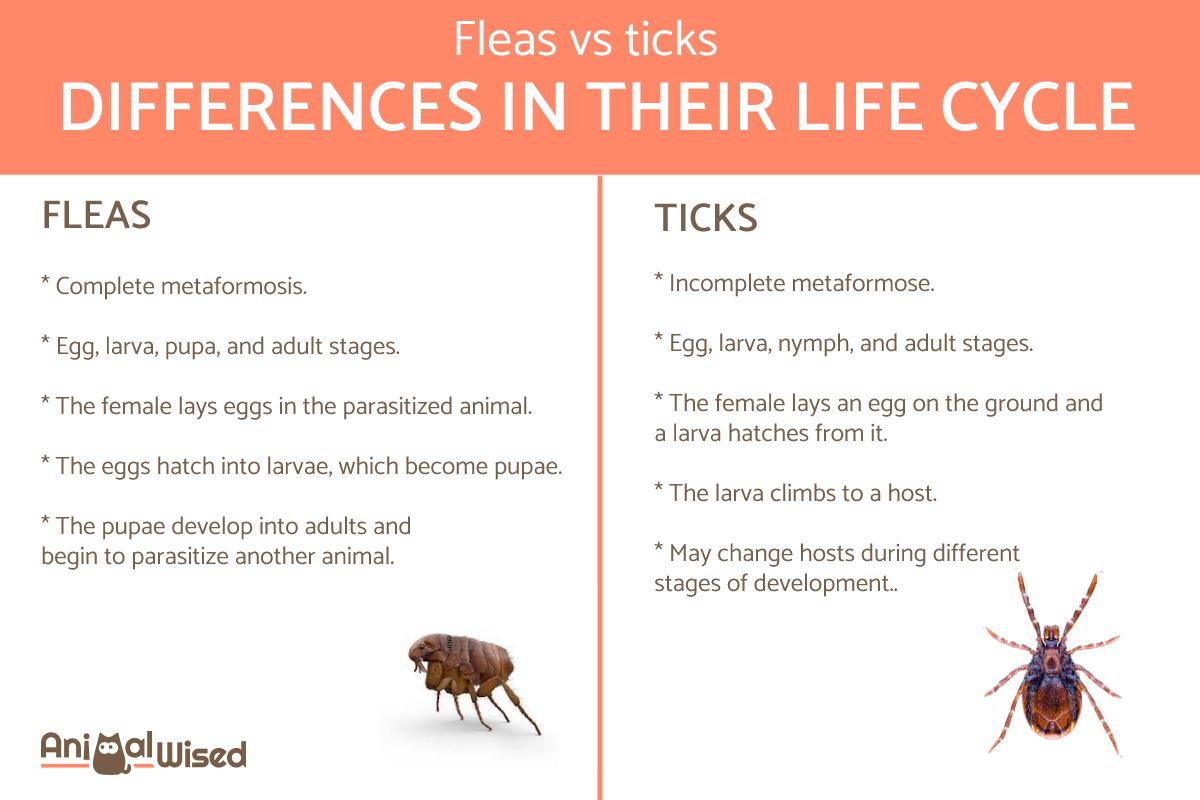 1 of 2
Differences Between Fleas and Ticks
Back to top