By Eduarda Piamore, Expert in canine and feline psychology, education and training.. June 24, 2019

The Boxer is a medium to large sized dog breed which originated in Germany during the 18th century. They were developed as a cross between a Bulldog and the now extinct Bullenbeisser dog breed. The latter was a Molosser-type dog which was used to hunt big game before being bred out into the current Boxer we know and love. Currently, Boxers are one of the most popular dog breeds in the world. Their charm lies not only in their rugged beauty and sleek appearance, but also their friendly and fun-loving temperament. When well-socialized, the Boxer is a loving and family friendly dog, noted also for their courage and loyalty.

As they have become so popular worldwide, many want to know more about this beautiful breed. One aspect which has caused some confusion is the question over different types of Boxer dogs. Specifically, people want to know what types exist and in what form. AnimalWised helps to shed some light on the subject.

You may also be interested in: Different Types of African Dog Breeds
Contents

Are there different types of Boxer dogs?

Officially, there is only one type of Boxer dog. All Boxer dogs belong to the same breed which has no official sub-categories or variant types. Unofficially, there is cause to make a distinction. The confusion over Boxer breed types is due to the existence of morphological differences among individuals within the singular breed. The variations tend to exist depending on country. This is reflected in the variations in breed standards according to different international organizations.

To elucidate a little further, although the Boxer breed originates in Germany, it quickly gained popularity on a global scale. This meant individuals form the original breed where brought to different countries. Each country had specific preferences when it came to morphology, i.e. their physical characteristics. These preferences lead to breeders wanting to highlight the characteristics which were most pleasant or desirable in a given society. In this way, the Boxer breed soon developed some region-specific traits. However, they still preserve the genetic traits inherited from their Germany ancestry and share the same fundamental features and temperament which characterize this dog breed.

Official breed standardizing bodies have also contributed to the idea of there being different types of Boxer dogs. This is because different organizations will prioritize the Boxer characteristics of a certain region over another. For example, the Federation Cynologique Internationale (FCI), also known as the World Canine Organization, has breed standards which most resemble the original German Boxer dog breed. Conversely, the Kennel Club (KC) has breed standards which closest to the British Boxer dog type from the United Kingdom. The American Kennel Club (AKC) has a breed standard which reflects the features typical of Boxers in the United States of America, known as American Boxer dogs.

Considered the most traditional of Boxer dog breed types, for some purists they are the only official breed standard. While there were different forms of the Boxer dog before, there wasn't a concerted effort to standardize the breed until Friedrich Robert, Elard König and R. Höpner came along. They established the first breed club for the dog known as the ‘Deutscher Boxer Club’. As an odd turn of events, however, the German box breed standard wasn't created until after the other two main Boxer breed types. This occurred in 1955 when it was approved by the FCI.

Morphologically, the German Boxer dog is characterized as slightly larger and more robust than other types of Boxer dog. Their bones are larger and more dense. As a result, their legs tend to be longer and their musculature has a more pronounced definition. Another feature typical of the German type Boxer dog is the 1:2 ratio between the length of their snout and the length of its skull. In comparison, this snout is wider than that of the UK Boxer dog type and smaller than that of the American Boxer dog.

In the photograph below, we can see a Boxer dog winning the ‘Best Minor Puppy’ award at the 2016 World Dog Show held in Moscow:

The standard of the UK Boxer dog, sometimes known as the British Boxer or English Boxer, was established by the Kennel Club of the United Kingdom (KC) in 1948. They were the second Boxer dog type to be ratified. There is a popular hypothesis which suggests the name of this breed comes from England. The theory is that is is called a ‘Boxer’ due to their propensity to utilize their front legs more than other dog breeds, similar to how boxing athletes keep their hands up.

Other theories about the origin of the name ‘Boxer’ suggest that it derives from the Bavarian word ‘Boxl’ which refers to leather trousers. This was applied as a term of endearment for the Bullenbeisser and was then transferred to the new breed in a new form.

Beyond any controversy over their name, the English Boxer stands out for being more athletic, lithe and sleek than other Boxer dog types. It has a stylized body and slender musculature which allows them to be agile and precie in their movement, without losing any gracefulness in the process. Generally they are the smallest of the supposed Boxer dog breed types with shorter and thinner legs, although this does not mean they lack strength. They also have the highest knuckles of the three. 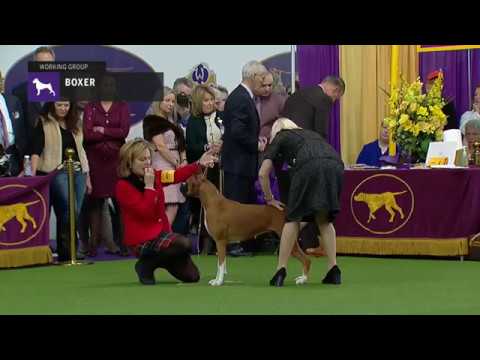 Although the American Boxer dog was the last to be developed, it was the first to be recognized by a canine authority when the American Kennel Club did just that in 1904. This ‘Boxer type’ is perhaps the easiest to recognize thanks to the absence of wrinkles in adult individuals. We can also see their coat is denser, stronger and brighter than the fur on the other types of Boxer dogs. Its snout is also wider than individuals of the German or UK Boxer.

As a side note, it is possible to find other dogs which claim to be a different ‘type’ of Boxer dog. They may display certain Boxer characteristics, but also show traits of other breeds. All this means is that they are a Boxer-cross, meaning they are a mixed-breed dog. They may have been intentionally bred with pedigree Boxer dogs, but they are not an officially recognized breed by any governing body. This is, at least, at the time of publishing this article.

If you have a breeder who is charging you a lot of money for a pedigree Boxer, but they do not appear to conform to standard Boxer characteristics (of any type), then you should be able to request a genealogical history. If they cannot give it to you, then it is possible they are not being honest. Having a mixed-breed dog is great and it shouldn't matter to us what their breed is if we are adopting a shelter animal. However, if a breeder is trying to charge you a lot of money, then this is unscrupulous and likely illegal. 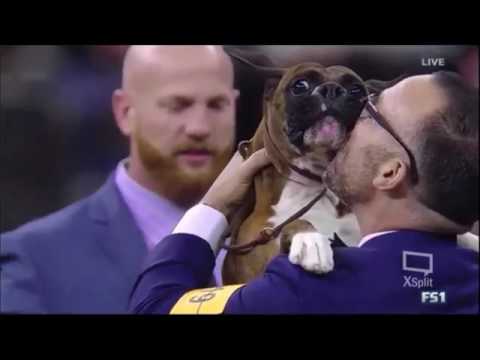 Is there a white Boxer dog?

One of the agreements between all standards of Boxer dog is that their coat can present in a wide variety of colors and patterns. In general, the ticked or brindle Boxer is one of the most common. So too is the fawn colored Boxer dog. Their fur shows shades of brown and black, often with white patches on their chest, legs and snout.

An all-white Boxer, however, is not officially recognized by shows and breed standard organizations. White Boxer dogs are not albino animals. In fact, they are not necessarily even white. They are dog which might have a brindle undercoat, but the white guardhairs are more visible. Unfortunately, as a result of white fur on Boxer dogs being seen as a ‘fault’, some breeders have historically taken to euthanizing otherwise healthy specimens. Fortunately, this is occurring less and less.

It's also important to make a distinction between white colored dogs and albino dogs. You can read our article on albinism in dogs to understand further.

If you want to read similar articles to Different Types of Boxer Dogs, we recommend you visit our Comparisons category. 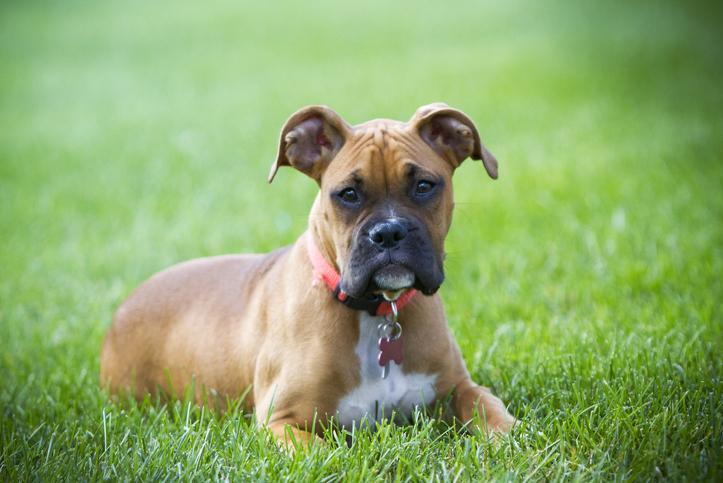 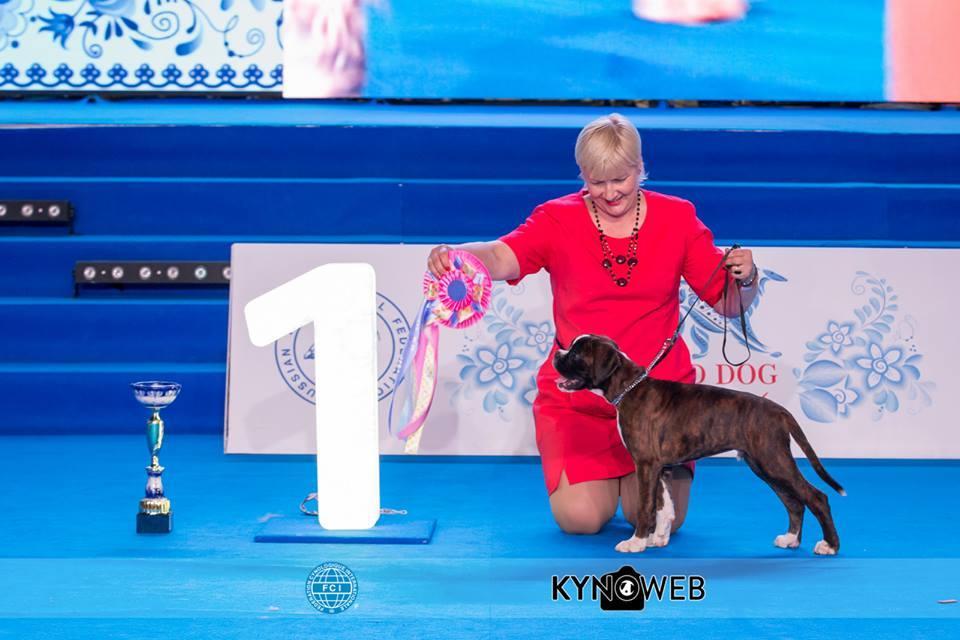 Image: https://www.facebook.com/FederationCynologiqueInternationale/
1 of 2
Different Types of Boxer Dogs
Back to top