By Nick A. Romero, Biologist and environmental educator. July 7, 2021

Did you know that deer have existed on our planet for over 34 million years? This large family of herbivorous mammals began their long evolutionary journey in the Oligocene period. Many changes have affected the various deer species over these years, but the end result is the taxonomic family known as Cervidae. This family is more generally known as deer or true deer, since there are other similar mammal species which are sometimes confused with deer. Within the 48 species and 30 taxonomic genera of Cervidae there is great variation, but they all have key characteristics which make them deer.

At AnimalWised, we explain what are the different types of deer species. We provide details about what makes an animal a cervid and provide photos for you to see the similarities and differences for yourself.

You may also be interested in: Different Types of Rhino Species
Contents

Animals within the Cervidae family are commonly known as deer, but are also sometimes known as cervids. All are mammals which fall into the same family and here are the taxonomic groupings of deer:

Now that we have taxonomically grouped the different types of deer species, we will look at the subfamilies and genera which the different species fall under. We look at the similarities and differences which allow us to determine them as separate species.

When it comes to knowing the characteristics that define the different types of deer, their anatomical features are some of the most distinguishable. These features are not purely aesthetic, but also plat important functions in their eating and behavioral habits.

In deer types, as in other animals belonging to the Artiodactyla order, the limbs end in an even number of hoof- shaped toes. This makes them even-toed ungulates and the toes rest on the ground when they walk. Generally, their legs are thin, as are their neck and head when compared to their thicker and heavier main body.

Another of the most outstanding characteristics of deer is the presence of antlers. These appear most commonly, but not exclusively, on males of certain species. Antlers are made from hardened keratin which have velvety coatings. They are protrusions from from skull, but they are not bone. This means they differ from the bony antlers of bovids and other horned animals.

Additionally, cervid antlers are characterized by having a molting period when the antlers are shed completely. This either happens annually or exclusively when they are young, depending on the species of deer. Velvet shedding also occurs to males.

Take a look at our article on do fallow deer shed their antlers to learn more.

The territorial behavior of male deer is a characteristic behavior. This results in males using their antlers to duel with other males in order to mate with as many females as possible. During this mating period, the unique ability of red deer (Cervus elaphus) to emit thunderous howls is very distinctive. The purpose is to communicate their presence, territoriality and dominance to attract females.

Cervids follow a herbivorous diet, consuming all kinds of leaves, shoots, flowers, twigs, and grasses. The way that deer consume vegetation is by browsing or grazing, with subsequent digestion characteristic of types of ruminant animals.

The vast majority of deer species live in large herds, in which they move to migrate when the seasons change. The purpose of this migration is to find greener vegetation on which to graze and warmer temperatures to survive.

The taxonomic family Cervidae includes a large number of deer species that we can find in natural and artificial habitats (the latter including reserves and zoos). The majestic moose (Alces alces) is the largest deer species in the world as they can reach up to 7' at the withers. The smallest deer is the Chinese water deer (Hydropotes inermis inermis) which only reaches around the knee of an adult human.

In this section we will see in more detail what are the different types of deer that exist. We can differentiate according to the taxonomic subfamily to which they belong:

The Capreolinae subfamily includes all deer species of those commonly known as ‘New World deer’, such as the majestic elk and reindeer (or caribou), which live in herds, and the solitary roe deer. Let's see in the following list the official taxonomic classification of the Capreolinae sub family to know both their common and scientific names.

Our article on the difference between mule deer and white-tailed deer can help us to learn more about different deer species.

The Cervinae subfamily is the second and largest subfamily of the 3 that make up the Cervidae family. It includes a total of 10 different genera and up to 26 extant deer species:

Regardless of the deer species or type, you may want to know if you can keep deer as companion animals. Our article on deer as pets will explain everything you need to know.

The third and last subfamily of cervids is represented exclusively by the genus Hydropotes, with the Chinese water deer (Hydropotes inermis) being the only species in this subfamily. It is a type of deer that is smaller than its relatives the Capreolinae and Cervidae, since they barely reach 14 kg in weight. They are much lighter compared to the heavy elk, deer and reindeer, whose adult males reach up to 600, 200 and 180 kg, respectively.

Another anatomical characteristic that differentiates water deer from other cervids is the lack of antlers, both in adult males and females. This curious fact could be directly related to the evolution of the different species of the Cervidae family, since water deer are the oldest species of the taxonomic family (from an evolutionary context).

The appearance of branched antlers in the the vast majority of the remaining deer species could be interpreted as a later adaptation, due to an evolutionary strategy of the larger deer that began to appear and diversify through numerous and diverse habitats of Central and East Asia. This means their antlers were not a problem of displacement, but an aid to defend their new territories and even measure their strength during mating periods.

It is worth highlighting the geographical distribution of water deer is reduced to 4 countries in the world. They are native deer of the mountains and rivers of China and Korea, as well as species introduced in England and France, where they became wild species.

Distribution of different types of deer

Having seen the types of deer species, we should know a little more about where they live. Cervids inhabit practically any region of the planet. Depending on the subfamily to which they belong and given their biological evolution, deer species find their natural habitats on the European continent or in Asia, America and even North Africa.

However, the presence of deer in Australia and New Zealand is due to the introduction of these species made by humans. When indicating the specific geographic distribution of a deer species, it is easier to look at the types of habitat rather than to differentiate by continent.

To know more about different deer species, take a look at our article on the differences between deer, elk, moose and reindeer.

If you want to read similar articles to Different Types of Deer Species, we recommend you visit our Facts about the animal kingdom category. 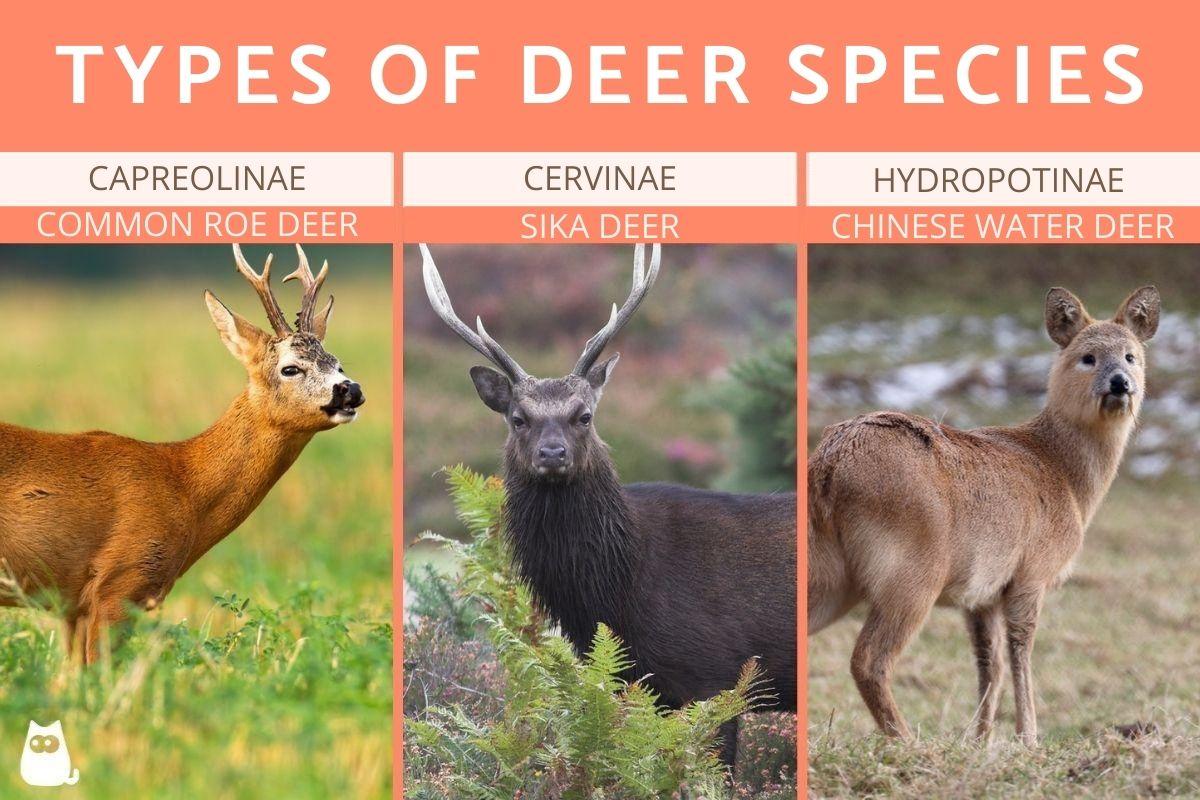 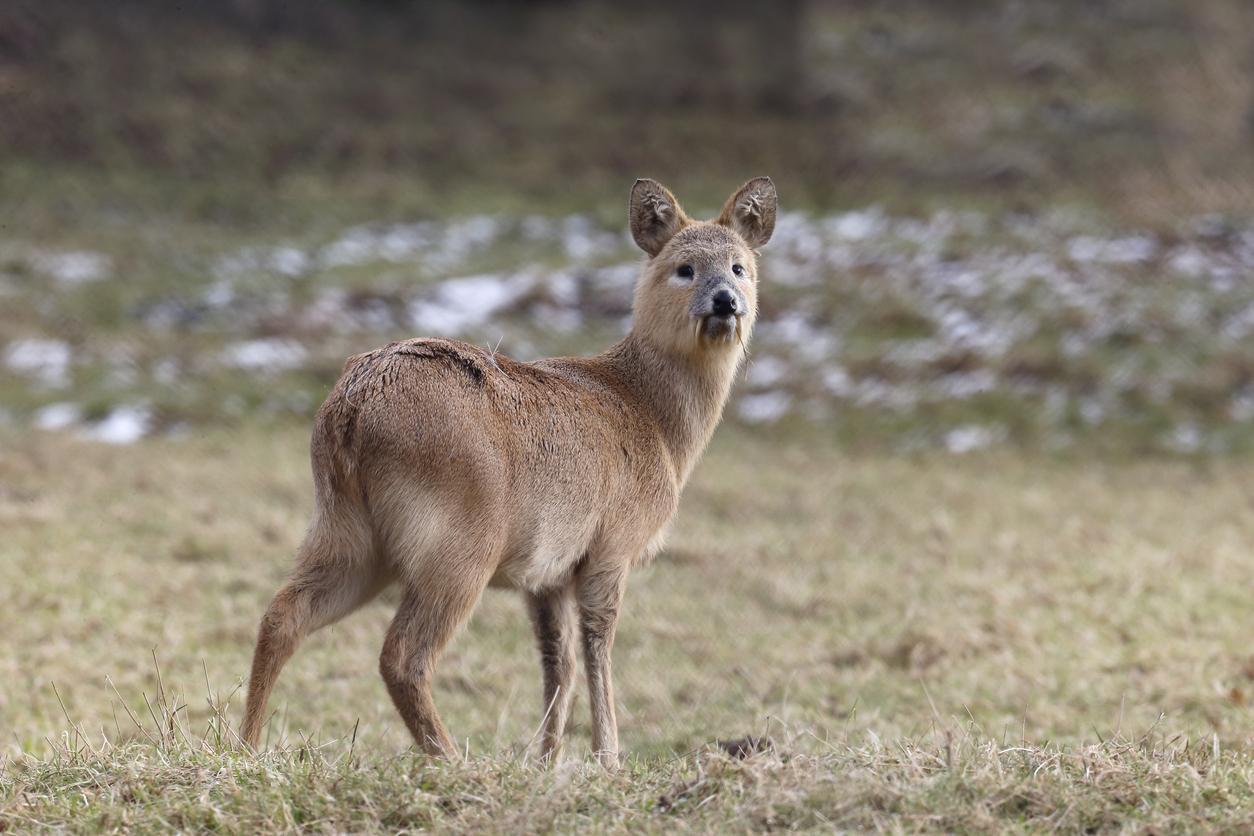 1 of 4
Different Types of Deer Species
Back to top