Do Snakes Have Bones?

Snakes are an animal which has fascinated humans since we have been aware of them. They have entered the folklore of ancient cultures which still resonate today. For some they induce fear and terror, others fascination and wonder. Many in the latter group even keep snakes as pets. Such fascination often stems from the snake's movement. Since they lack limbs, snakes have a vermiform appearance, moving on the ground like a worm. Although they often move carefully and slowly, they can reach amazing speeds when they want to.

Since snakes move in a way which resembles a worm, does this mean they do it in the same way. Since worms don't have any, do snakes have bones? Since snakes are vertebrates, we know they have a spine, but what about the rest of their skeleton? AnimalWised reveals more.

You may also be interested in: Do Mice Have Bones?
Contents

In order to explain more about whether snakes have bones, we need to look at other characteristics. Snakes are part of the order Squamata, more specifically the suborder Serprentes which is why they are often known as serpents. Common characteristics of all snakes include:

Do snakes have bones?

In the animal kingdom, we generally group them into two major categories: vertebrate or invertebrate. Snakes, as with all reptiles, are vertebrates. They have a spinal column, known as a vertebrae, which runs down the entire length of their body. This spine is made up of wide and flat bones joined together by intervertebral cartilage. The function of the spinal column is to house and protect the spinal cord, the highway of their body's central nervous system.

As with other vertebrates snakes have bones to support the structure of their body. However, how many they have and how they are ordered can vary wildly. Snakes have ribs which are attached to the vertebrae. Thanks to this, the snake is incredibly flexible, making it appear as if they may not even have a skeleton at all. Their skull also has many bones which are formed in such a way to give them some extraordinary abilities, which we detail below.

Anatomy of a snake skeleton

Now that we know snakes have bones, we can learn a little more about their skeleton:

A snakes body is long due to having a large number of vertebrae. These are shorter, wider and more numerous than the majority of other reptile species. Although exactly how many vertebrae each snake has will depend on their species, they are usually over 100. Some may have up to 500. The intervertebral discs are relatively flexible, allowing the snake to bend easily and ripple.

Via the evolutionary process, snakes have lost their pectoral arch, i.e. the shoulder where their forelimbs would have been. They do not have a pelvis either, but some species have an outline of where the pubis had once been. This is the case with boas (Boidae) and pythons (Pythonidae). They both retain a certain degree of narrowing at the level of the pelvis and the pectoral area.

The skeleton of snakes is also characterized by lack of limbs. Since snakes do not have legs, they perform locomotion by moving their body in various ways. These different modes of locomotion are often very subtle and their movement can change between modes in an instant. It is believed snakes lost their ancestors use of legs because they were unnecessary. Boa and python species of snake have vestigial remnants of their limbs. These are tiny bones or spurs which emanate from either side of their cloaca.

There are many different types of python species and you can read our related article to know whether pythons as pets are a good idea.

In addition to the vertebrae, snakes have a series of floating ribs. Although they are anchored to the vertebrae at one end, the other is not attached to anything. This is because snakes lack a sternum. Since they are free moving, the ribs can be moved and contorted in such ways that they can navigate their terrain differently than other animals. Numerous muscles are also anchored to the ribs, allowing them to exert more force and move much more quickly.

Snakes are diapsid animals. This means their skull has two temporal fossae on each side. This skull is made up of many pieces of individual bone, so they have more joints than the skull of most reptiles. In addition, the two parts of their jaw bones are not joined together, but connected by elastic ligaments, an essential part of snake anatomy for feeding.

Thanks to the elasticity provided by these ligaments, the animals can open their mouths much more than any other reptile. They actually dislocate their skull while eating. For this reason, snakes are able to consume prey with a diameter several times larger than their own head.

However, not all snakes usually eat very large prey. Those which do, usually do so through constriction and venom. Venomous snakes have specialized teeth known as fangs which inject the venom into their prey. In opistoglyph and protoglyph snakes, the fangs have a groove. In solenoglyph snakes, the fangs are hollow. However, most snakes are aglyphs, which do not have specialized teeth or venom.

If you want to read similar articles to Do Snakes Have Bones?, we recommend you visit our Facts about the animal kingdom category.

Bibliography
Can Snakes Hear?
How Does a Snake Move?
Do Cats Have Emotions? Are They Able to Have Feelings?
How Many Fingers Do Cats Have?
Related categories
Endangered animals
Most read
1.
What Animal am I According to my Zodiac Sign?
2.
What Does It Mean When a Cat Shows Up at My Door
3.
10 Most Beautiful Animals in the World
4.
The 10 Most Solitary Animals in the World
5.
Animals With Scales - Full List
6.
Why do Dogs Get Stuck when Mating?
7.
My Female Dog In Heat Won’t Accept A Male - Causes
8.
How Many Types of Lions Are There?
How Many Teeth Do Dogs Have?
How Many Teeth Do Sharks Have? - Types of Shark Teeth
Why do Cats have a Rough Tongue?
Venomous Snakes in Florida
Do Frogs Have Teeth?
Do Cats Have Dreams?
Do Turtles Have Teeth?
Do Dogs Have Feelings?

Do Snakes Have Bones? 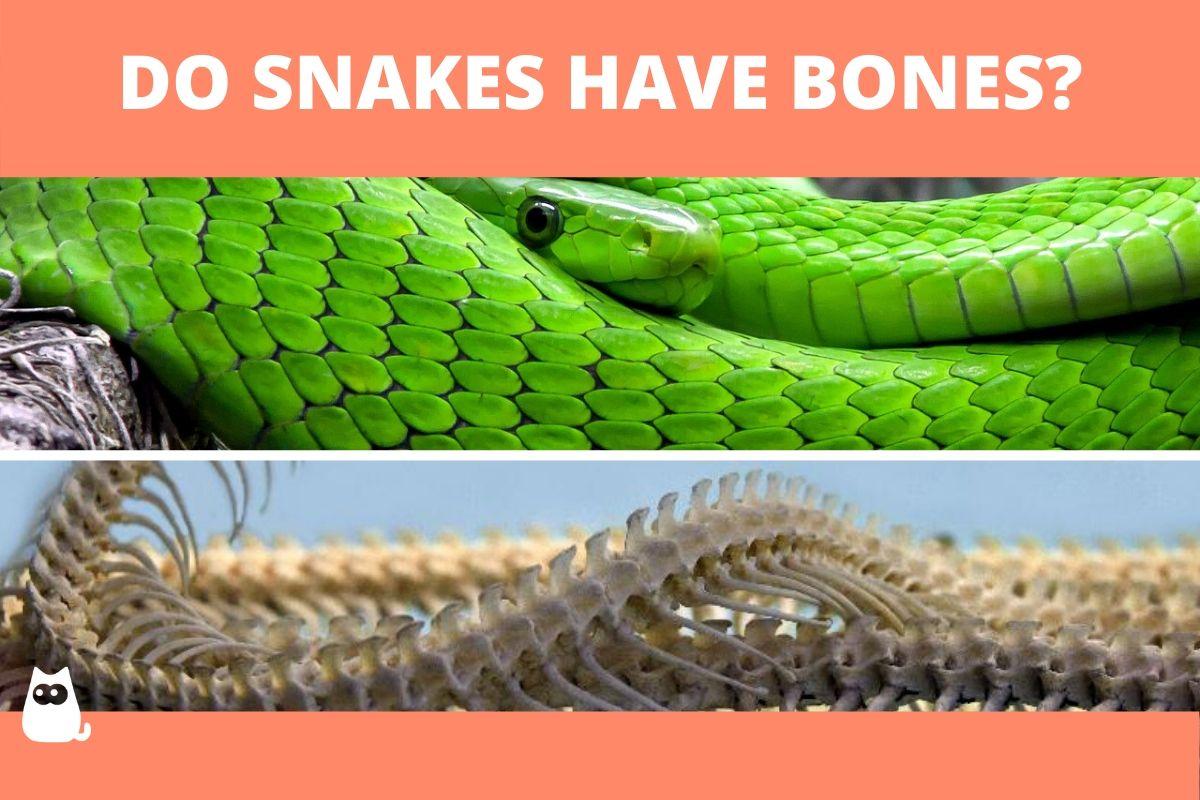 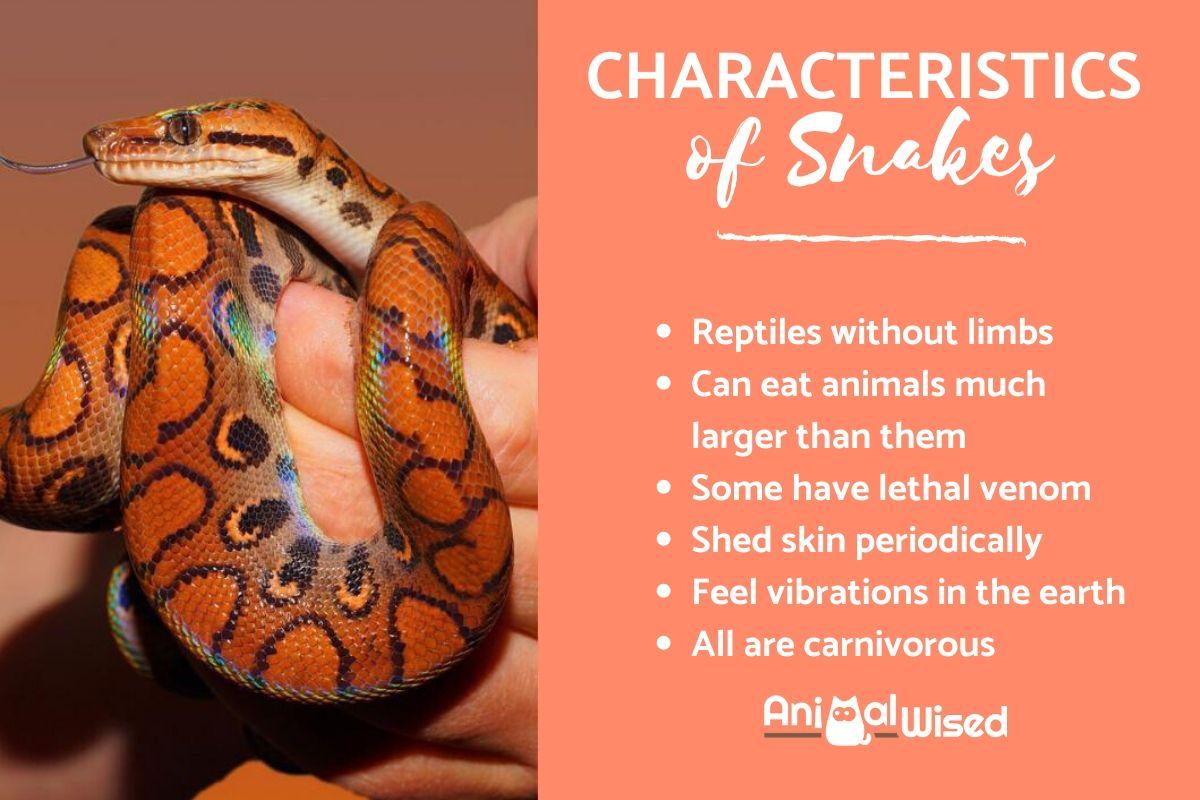 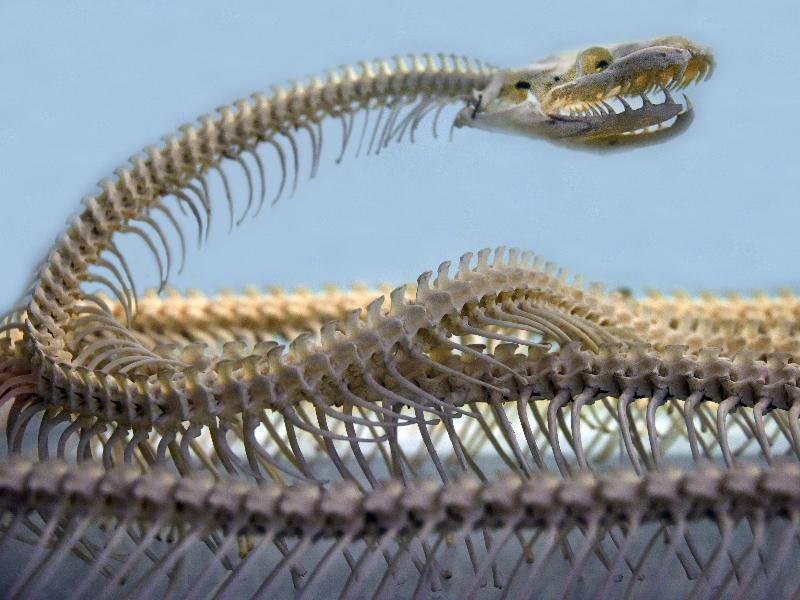 1 of 3
Do Snakes Have Bones?
Back to top