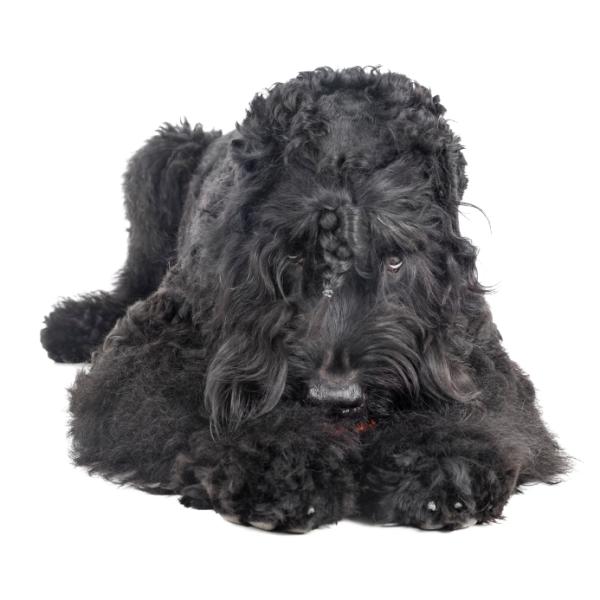 The Russian black terrier, or tchiorny terrier, is big, beautiful, great guard and defense dog. Despite its name, it does not belong to the terrier group. This dog actually belongs to the pinscher and schnauzer breed. They are very active dogs and sometimes can be a little aggressive, as their origins stem from defense dogs. They need to exercise a lot and live in outdoor places with large spaces in order to have the space they need.

In this AnimalWised breed file we are going to discuss the the origins, physical characteristics, character, care, education and the health of the Russian black terrier.

Origin of a Black Russian Terrier

In the decade of the '40, the Soviet armed forces decided to create a versatile working dog breed , capable of responding well in different conditions and willing to defend their own in any circumstance. They then selected the most suitable breeds of dogs from countries that were under Soviet occupation.

The breeds that stood out most in the creation of the Russian black terrier were the giant schnauzer, airedale terrier and rottweiler. By 1957, the first black terriers were presented to the public and given to civilians.

In 1968, this standard breed was handed over to the International Cynological Federation, but was only officially recognized in 1984. In 2001, the breed was also recognized by the American Kennel Club. Nowadays this is not a very well known breed, however, it still holds a circle of fans and admirers, especially among people who are adept to sports with protection dogs.

The head of a black terrier is long, moderately broad with a flattened forehead. Their apparent mustache and beard give the snout a square appearance. Their eyes are small, oval, dark and obliquely arranged. Their ears are small and triangular, of high insertion and hang from the base.

The tail of this dog is thick with high insertion. The FCI standard, unfortunately, requires that the tail be amputated by the third or fourth vertebra. We at AnimalWised believe that this ‘‘rule’’ results in permanent damage to a dog and is not justified only for "aesthetic" reasons.

The coat of a Russian black terrier is rough, hard, dense and well attached. It can be black or black with gray hairs.

Character of a Black Russian Terrier

These dogs are energetic, distrustful of strangers and aggressive. They are excellent defense dogs, both because of their powerful structure and for their assertive and courageous character. It is very important to socialize these dogs at an early age, because they tend to be suspicious and aggressive towards strangers. With their family, and especially with well-known children, they tend to be excellent pets and very friendly. They can get along well with dogs they know, but tend to be dominant or shy with unknown dogs. They can also learn to live with other pets.

Russian black terriers can cause problems for inexperienced owners. Although they can become excellent pets, we must consider that they are working dogs, with a predisposition to react aggressively to real or fictitious threats. Therefore, they do not adapt well to life in large and densely populated cities, unless their owner is a connoisseur of protection dogs.

Caring for a Black Russian Terreir

A Russian black terrier will not lose much hair when his coat is well cared for.To ensure this, it is necessary to brush their hair regularly, two or three times a week, and it is recommended to take this dog to the canine hairdresser approximately every two months. We also advise bathing this dog regularly, but no more than once a month.

These dogs need a lot of exercise and a lot of company. Although they are working dogs, they are not canine dogs and suffer greatly when left alone for a long time. In addition to three daily walks, they need to do more intense exercise. Canine sports, such as obedience tests, agility and schutzhund training, can be useful to channel the energy of these dogs. These dogs are prone to elbow and hip dysplasia, therefore, care must be taken to not hurt its joints.

Since Black Russian Terriers originated from working dog breeds and were subjected to a very intense selection, they adapt very well to different styles of dog training. They can be trained with traditional techniques or with so-called positive methods. Whatever method you choose to use, these dogs learn very quickly, but they take time to mature. Clicker training is known to work very well with these dogs.

Health of a Black Russian Terrier

Hip dysplasia, elbow dysplasia, and progressive retinal atrophy are among the most common diseases in this breed.

Upload a picture of your Black Russian Terrier 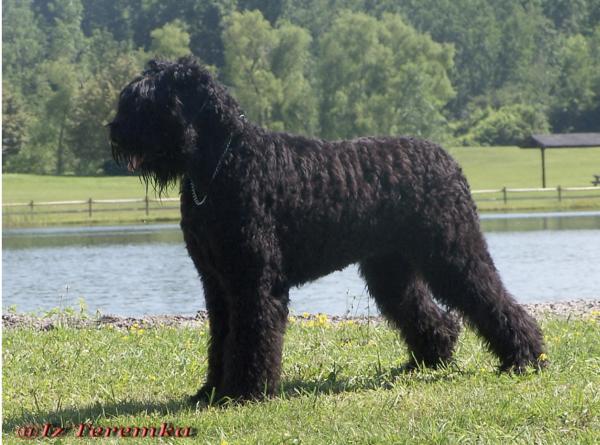 Thank you for posting a photograph of our Black Russian Terrier in your photo gallery. He is the fourth photo top, from left to right. His name is Kalinka's Illarion Iz Teremka and his call name is Lari. Unfortunately, he passed away September 5th 2015.
Black Russian Terrier 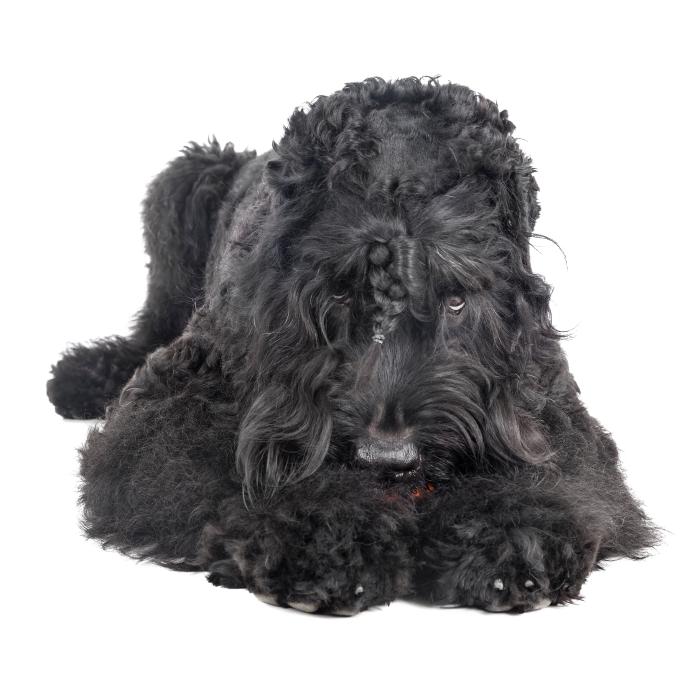 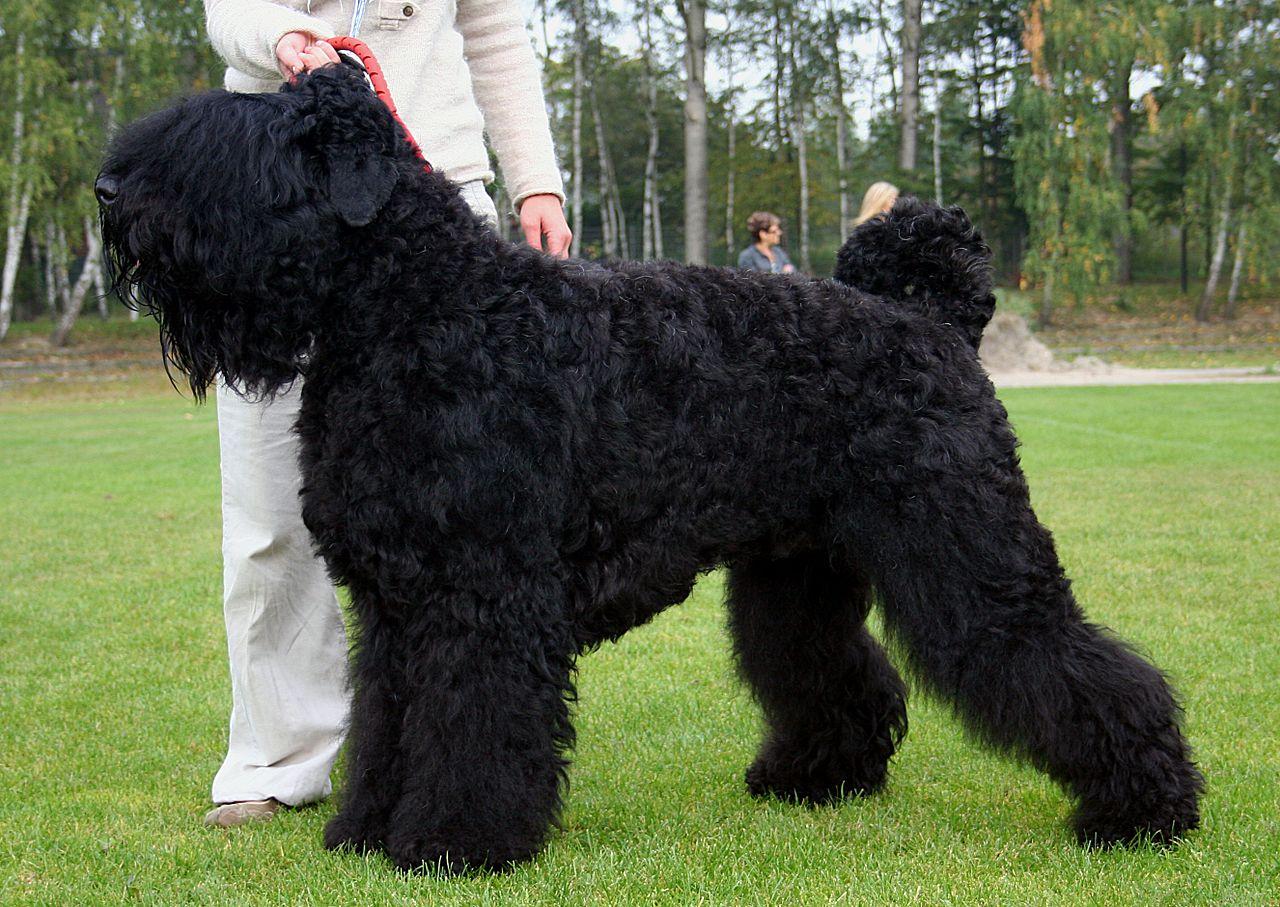 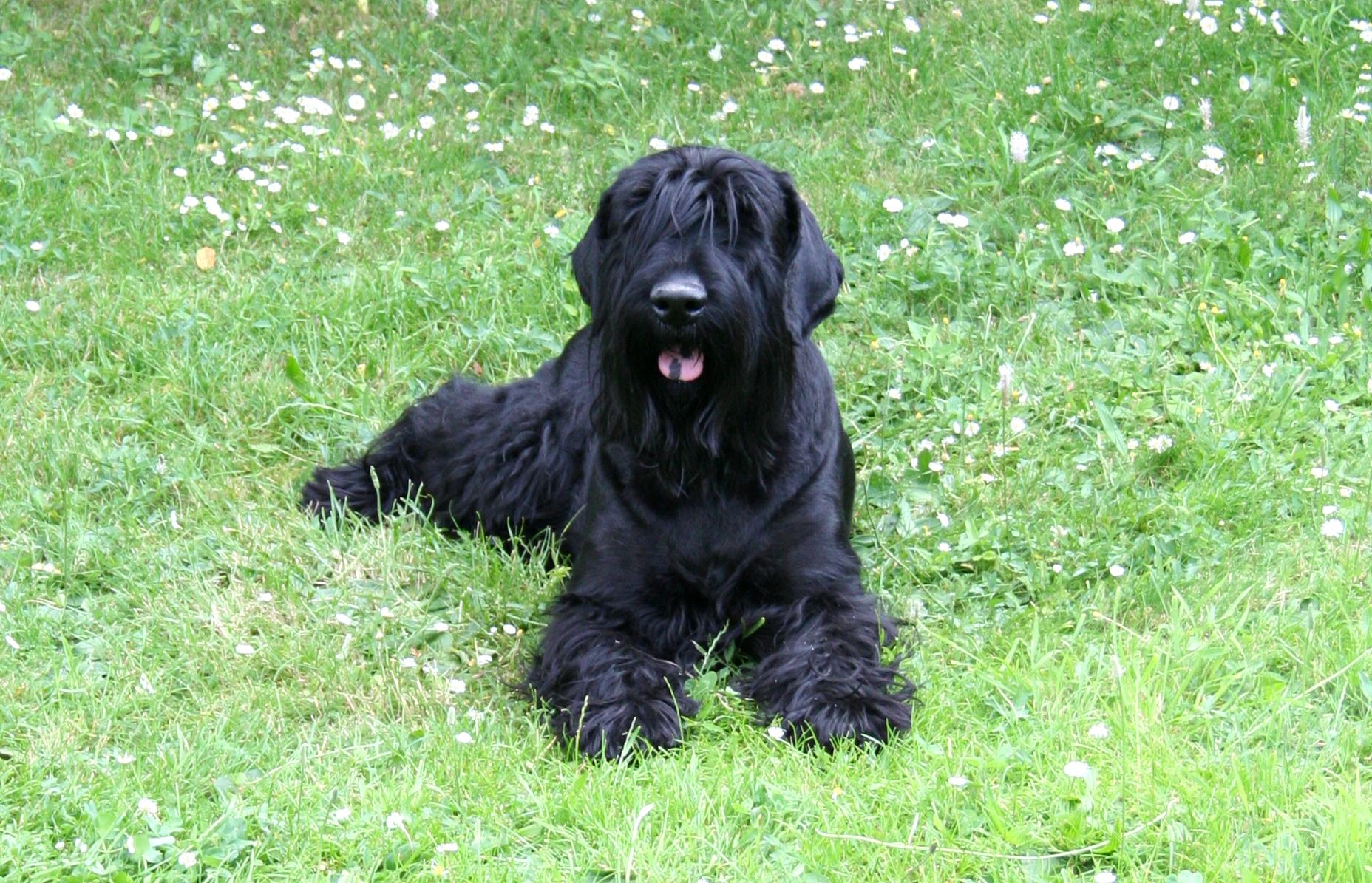 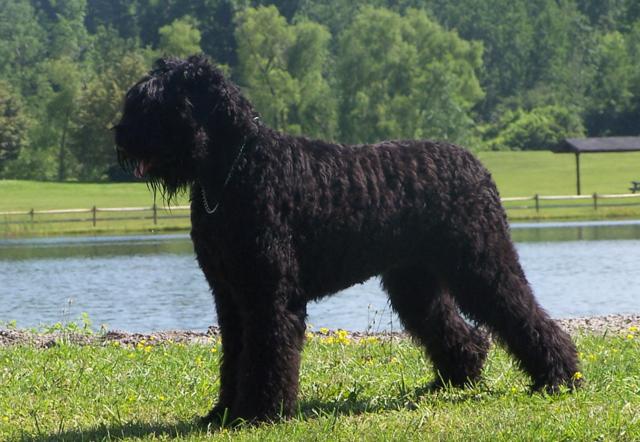 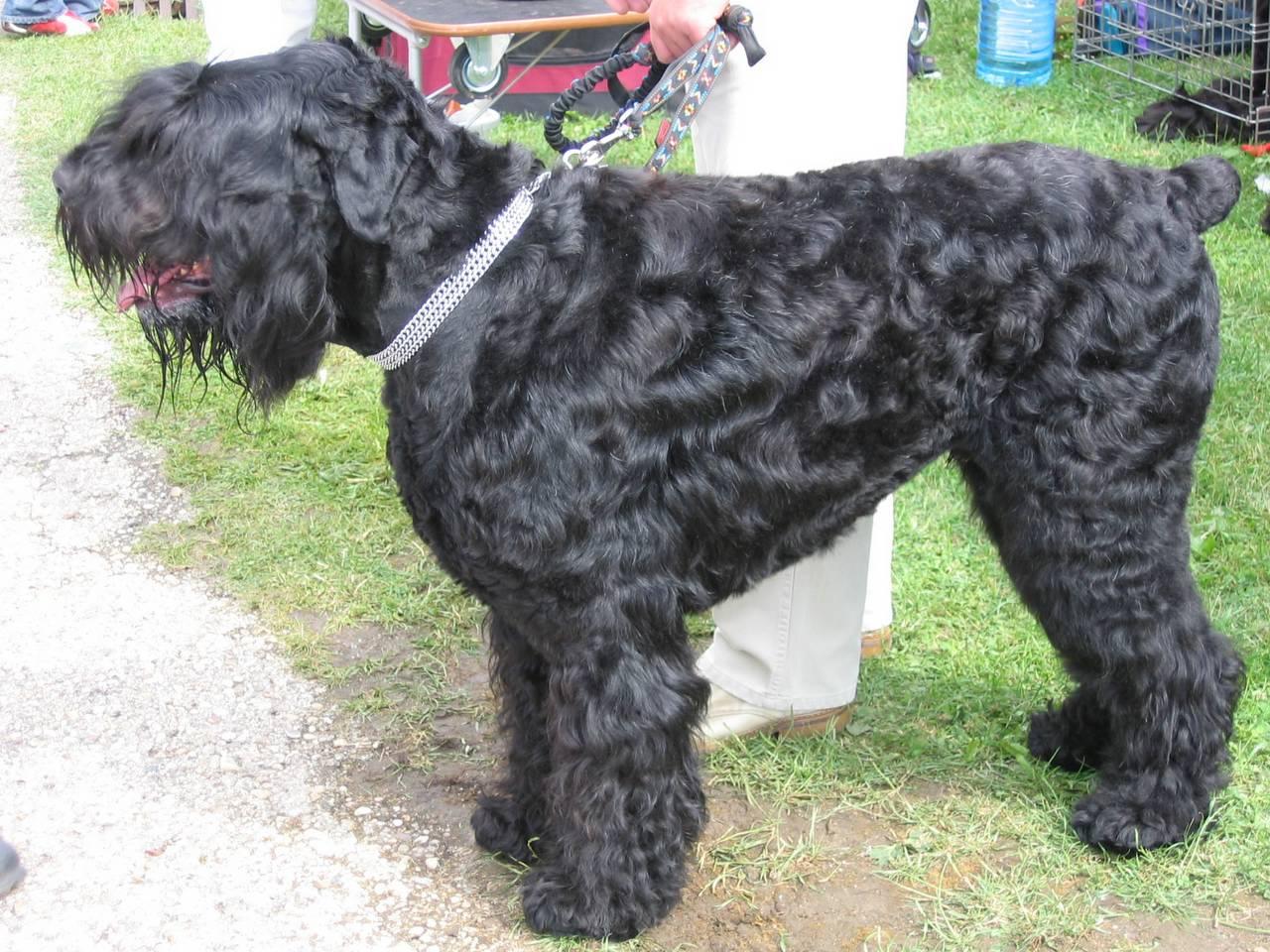 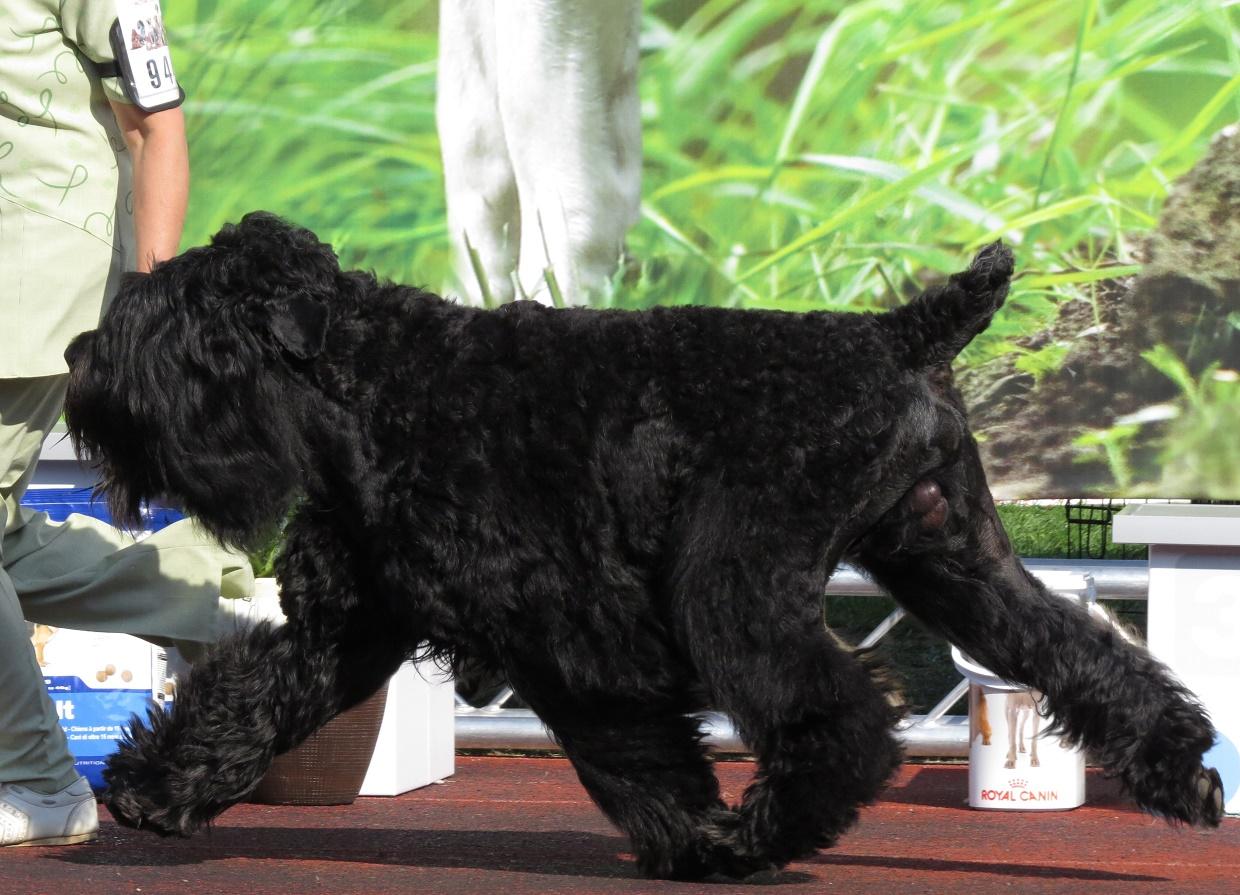 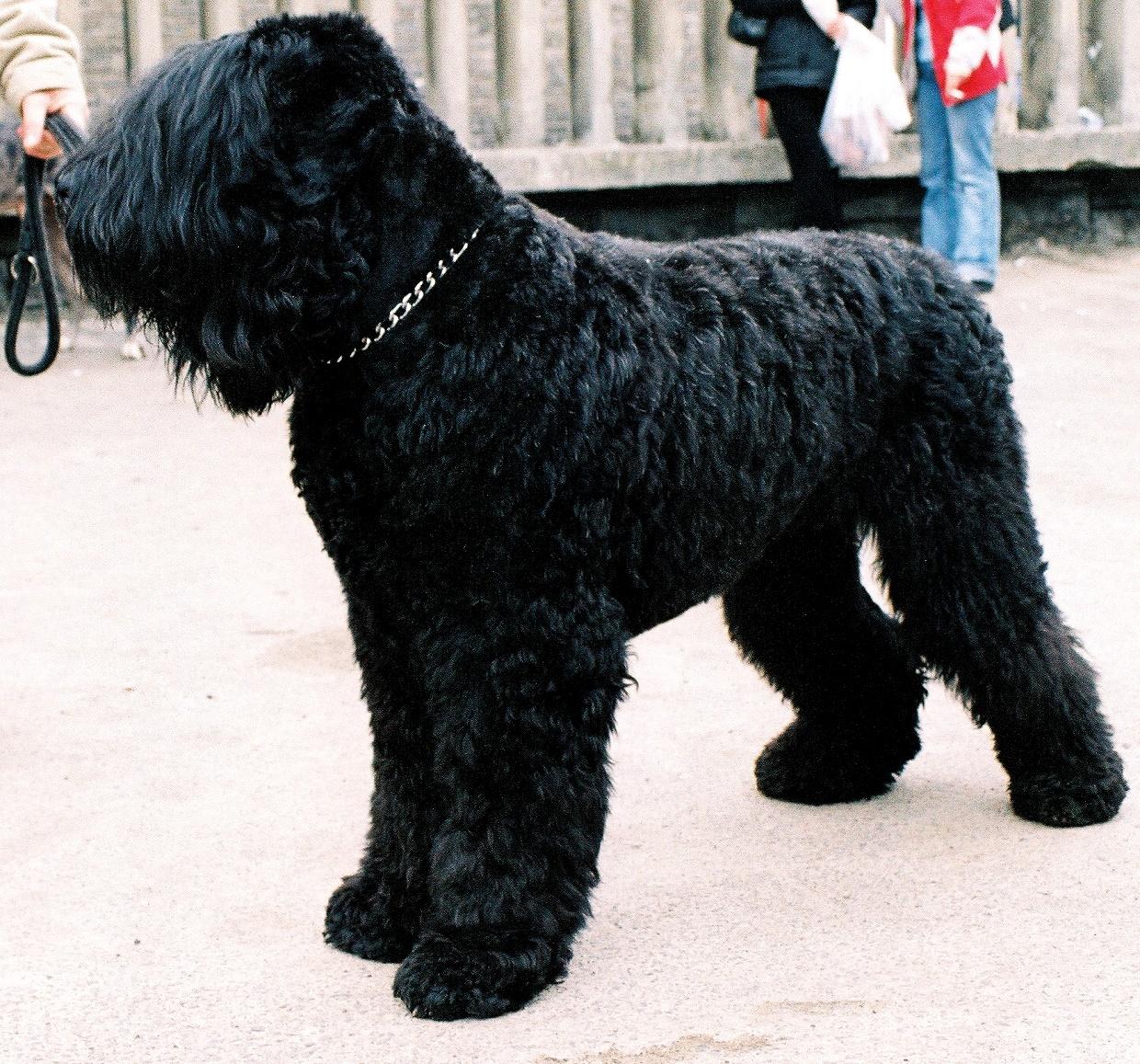 1 of 7
Black Russian Terrier
Back to top