If you've seen a dog with a blue tongue, your first thought might be ‘where did they get the money to buy Jolly Ranchers?’ However likely this might seem, there just might be a more natural explanation. The Chow Chow is a dog which is estimated to have originated in China 2,000 years ago. Their distinctive blue, navy or black tongue is a character trait which is more commonly found in lizards than in dogs. The Chow Chow isn't the only dog breed which has this distinctive colored tongue, Shar Peis and a few other purebred dogs also have this coloration. However, it is far from the only interesting thing about this beloved dog.

At AnimalWised, we take a look at the dog with the blue tongue: the Chow Chow. We see a little about not only its characteristic appearance, but its temperament and also some of the legends which surround this ancient breed of dog.

You may also be interested in: Top 9 Dog Breeds with Blue Tongues
Contents

Characteristics of the Chow Chow

Not that we haven't mentioned it already, but despite its uniqueness, the Chow Chow's blue tongue might not be the first thing you recognize about this dog. You might be first attracted to its lovely mane of fur which surrounds its face. This dog has a double coat which puffs out, making them look like they are chubby animals despite their relative athleticism. They are sturdy with a large square head. They usually come in some variation of red golden colors, but it is not uncommon to see a dark brown or cream colored Chow Chow either. Their eyes are deeply set and they have a medium length curly tail which usually sets upwards.

Despite their stocky build, Chow Chows are quite agile. They were known as 'war dogs', noticed by even Marco Polo for their ability to fight alongside their owners. This may seem incongruous with their teddy bear looks, but it doesn't mean they are viscious dogs by any extent of the imagination. They can be very peaceful and gentle dogs. Perhaps due to their ancient breeding, they are also very loyal. This means they can be wary around strangers and sometimes overprotective of their owner if they perceive a threat. It is also the reason they were used as temple guard dogs in parts of Asia like China and Tibet where they originated. They are the basis of some Chinese lions, the stone carvings and statues which can be seen in different Buddhist temples as well as outside the Forbidden City. These statues are known as Imperial guardian lions or simply Foo dogs.

They can also be difficult to train due to their stubborn nature, which means they need to socialized early. The more they get used to being with other animals and people, the more likely they are to become more level adults. They are a wonderful companion animal, especially later in life. Like all dogs, they need appropriate exercise, but they have a relatively low energy. This makes them a good house pet for a careful owner.

Legends of the blue tongued dog

There are two main legends of how the Chow Chow got its distinctively colored tongue. The first is related to the dog's close ties to the Buddhist community in Asia. On one very cold day, long ago, a Buddhist monk grew very ill. He was so ill he became incapacitated and could not go out for wood to heat himself up. The Chow Chows went out into the cold to find wood for the monk, but unfortunately all they could find were charred logs. As they brought them back in their mouths, the charring caused their tongues to turn this blue black color.

The second legend of the blue tongue concerns the Buddha himself, Siddhartha Gautama. As the Buddha was painting the sky its distinctive blue color, he set down his paint brushes on the ground. The inquisitive Chow Chow walked over to the brushes and gave them a curious lick. This resulted in the dog's permanent tongue color.

Despite their enjoyable mythic quality, we can't but help question the veracity of these stories. But this doesn't matter, the Chow Chow has enough actual history to more than make up for it. We stated earlier that this dog somewhat represents a teddy bear, but the reverse is possibly true. The British Queen Victoria as a child had a Chow Chow as a pet. She had it accompany her everywhere, but some of her caretakers thought this not wise for such a child. Instead they created a soft toy version which she could carry round instead, still having this distinctive bear like mug. However, this is unlikely as the Teddy's origins have been documented as coming from elsewhere.

There are more verifiable stories about Chow Chows which are usually linked to their famous owners. Historical names who were known to be Chow Chow owners include footballer Mario Balotelli, singer Janet Jackson, cultural icon Elvis Presley and former president of the USA Calvin Coolidge. Perhaps the most interesting Chow Chow owner was psychoanalyst Sigmund Freud. Interesting as he was said to employ them as a therapy dog. Not simply as a way to help patient's relax, but some claim he used them to achieve diagnoses.

How did the Chow Chow get its blue tongue?

The Chow Chow's tongue is blue, purple, piebald or black depending on the individual dog. It is simply due to the presence of pigmented cells, similar to the same types of cells which determine human skin color. The dark tongue color is a curious trait as it is also found in some wild animals such as a giraffe or even some bears such as the polar bear. There is some research which suggests Chow Chows derived from a Hemicyon a sort of cross between a dog and a bear (the name literally means ‘dog-bear’). They lived in the Miocene age and have been extinct for a long time. This is simply a hypothesis and is difficult to back up scientifically as fact, but it also doesn't appear unlikely. One strange supporting fact is that the Hemicyon has fossils showing it to have 44 teeth. This is shared by the Chow Chow, but not by most other dogs which have only 42.

While Chow Chows may not be the only dog to have a blue tongue, they are the only dog breed to have lips and a palate characterized by the same color. There are many breeds which have spots of this color, but none which present with completely dark mucous membranes. One stranger fact is that this Chow Chow breed is not born with a blue tongue. Instead it develops around the ages of 2 to 3 months old. If the tongue does not change color and remains pink, it is said not to be a pure bred.

If you want to read similar articles to Dog with a Blue Tongue: Chow Chow, we recommend you visit our Facts about the animal kingdom category.

10 Fun Facts About Dogs You Didn't Know
Chinese Dog Breeds List
Chow Chow Names - Male and Female!
18 Oldest Dog Breeds in the World
Related categories
Endangered animals
Most read
1.
What Animal am I According to my Zodiac Sign?
2.
10 Most Beautiful Animals in the World
3.
What Does It Mean When a Cat Shows Up at My Door
4.
The 10 Most Solitary Animals in the World
5.
Top 10 Smells Dogs Hate
6.
How Many Types of Lions Are There?
7.
Why do Dogs Get Stuck when Mating?
8.
My Female Dog In Heat Won’t Accept A Male - Causes
Dog Sleeping Positions And What They Mean
How Long Do Dogs Live For?
Are Blue Bottle Flies Dangerous?
Why do Cats have a Rough Tongue?
15 Blue Animals in Nature
What Do Blue Ringed Octopus Eat?
Animals With Scales - Full List
Most Popular Cat Breeds - With Pictures! 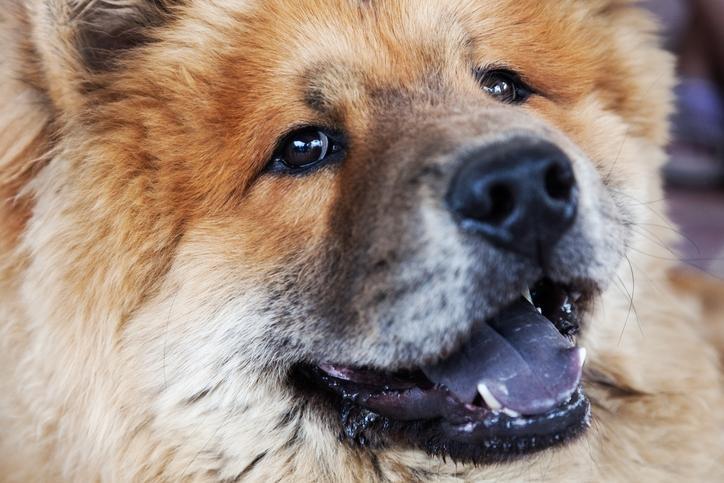 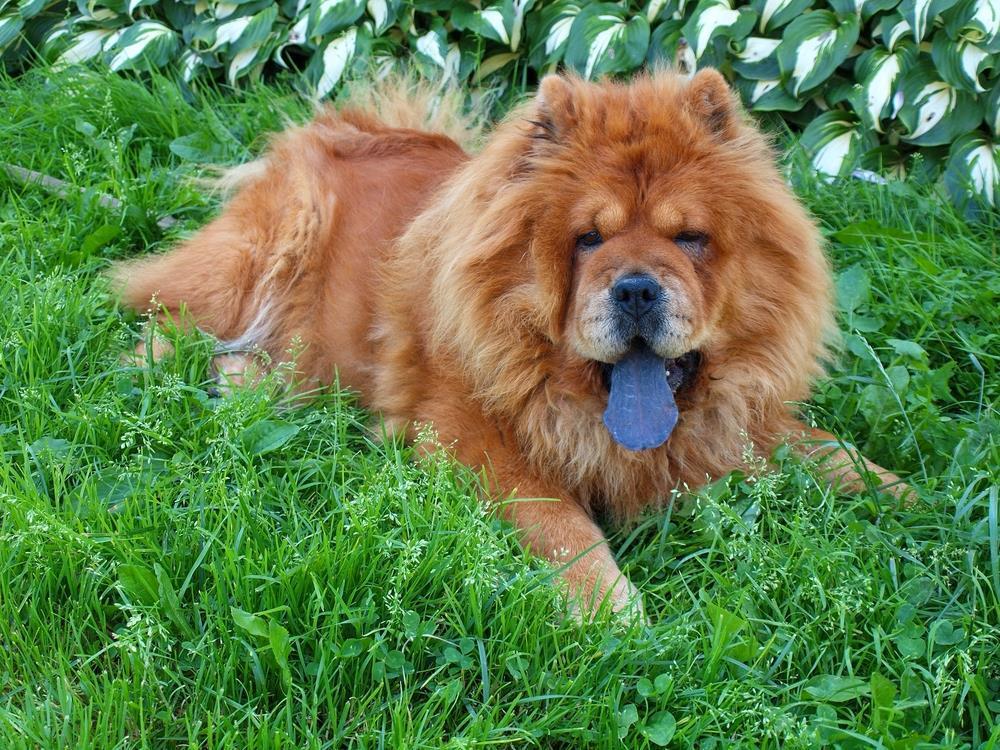 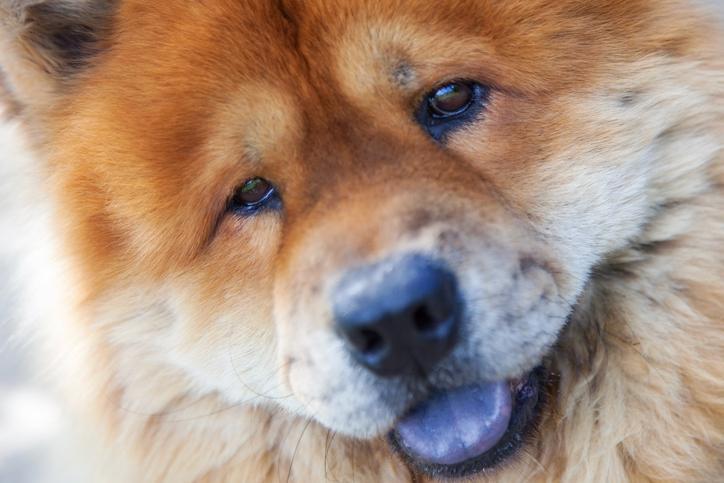 1 of 3
Dog with a Blue Tongue: Chow Chow
Back to top